Two years ago, we promised the kids that, when Nora was 10 and Ian was 6, we would take them to Disneyland Paris, a common "once (or twice) in a childhood" vacation destination for children in Spain. 2019 was the year. I, myself, had never been to Paris, and my wife had been once, 22 years ago with her schoolmates, both to Paris and Disneyland, so we wanted to make sure we had both some time in the park and also some time in the city. Much like how the Parque Warner is 50 minutes outside of Madrid, Disneyland is pretty far out from Paris, thus requiring two different lodging options. The hotels at the park cost an arm and two legs, so we were very pleased when we found an Airbnb very close by the park for a very reasonable rate. If you look at Disneyland Paris on a map, you'll see there's a huge circle around it. My guess is that everything inside that circle is owned by The Walt Disney Company; our apartment was right outside the southern edge of the circle in the town of Serris.

Disneyland Paris is the Europeans recreating the American recreation of Europe.

Before we get to the pictures, I want to drop some thoughts upon you. Just as I expected, Disneyland was just a better, more polished, cleaner version of the Parque Warner we went to in Madrid. Disney's intellectual property is vast, and not everything could be included, so I found it interesting which properties they chose to push. There were older things like Peter Pan, Snow White, and Cinderella, and newer purchases, like Nemo, Toy Story, and of course the money printing machines of Star Wars and Marvel. The most interesting part was the irony that most of the historical Disney stories are adapted from European fairy tales, so they are an American imagination of the quaintness of cobblestone European life, with royalty and peasants, etc. Disneyland Paris is the Europeans recreating the American recreation of Europe.

The only rollercoasters I can go on are the ones where you have to wait in line with a bunch of sticky-fingered toddlers who don’t yet understand how queues work. 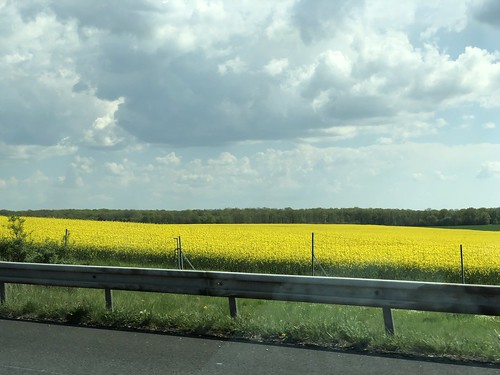 The part of France we drove through was extremely flat, with wide open fields and big sky. And of course these striking fields of rapeseed flowers. 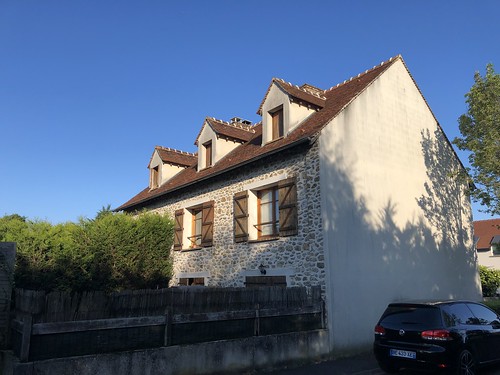 Our apartment was the top two floors of the left third of this house. It was nice enough. 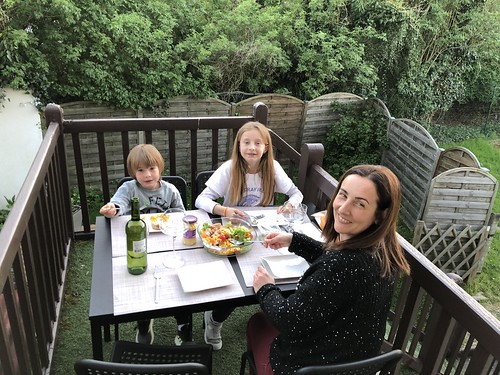 For dinner on our first night, my wife said, "Hey, I bet this [tiny] dining room table will fit out on the porch!" 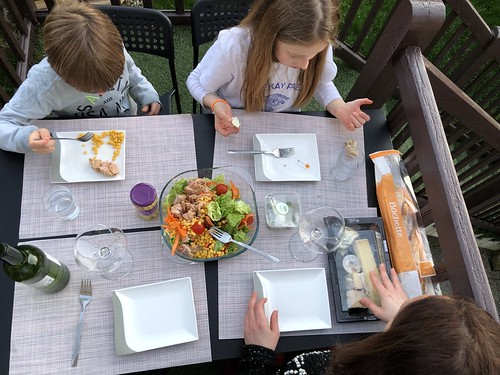 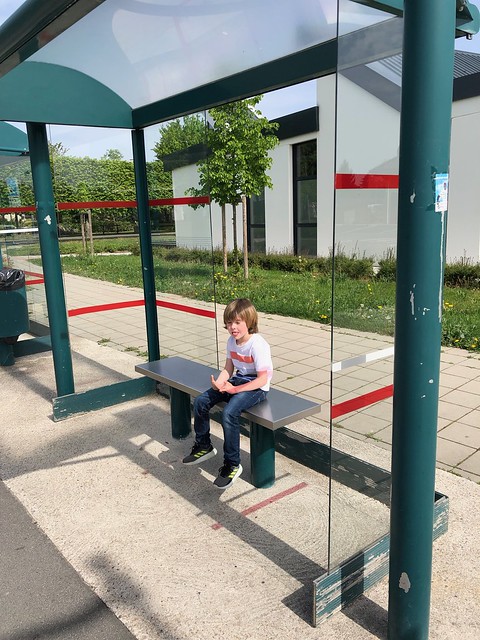 Due to the exorbitant parking fees, it was more economical to take a bus to the park, despite having our car with us. 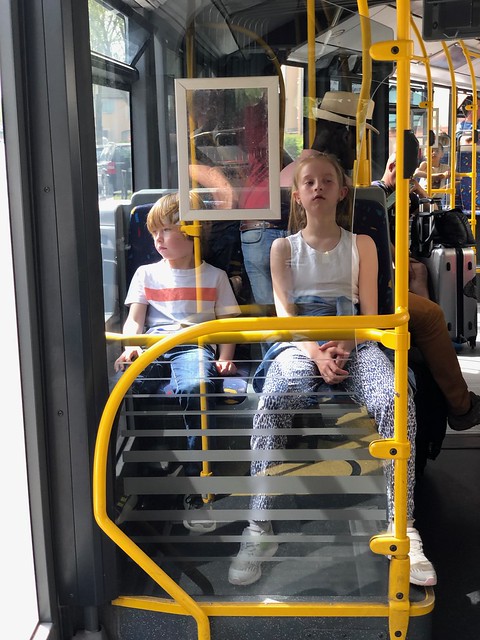 All the other people on the bus were either going to spend or earn money at the park. 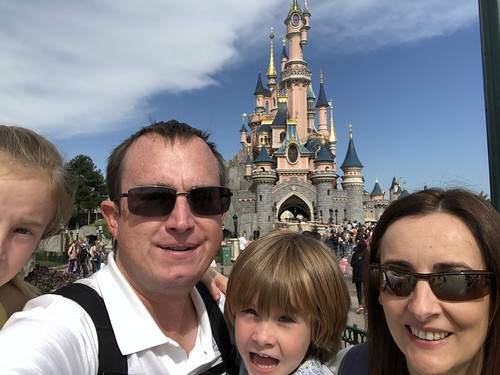 The first of many obligatory selfies with The Castle. 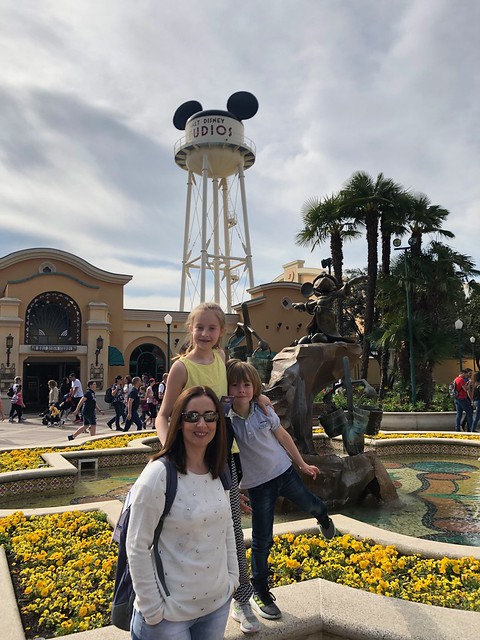 When we first entered the Walt Disney Studios Park.

Let's talk for a moment about the Mickey Ears that you can purchase and wear atop your head. What a bizarre phenomenon. It's a head decoration that it's only acceptable to wear in one place (or I guess three if you count the other Disney parks). I will grant you that they are cute, but it's such a strange purchase, unlike any other I can think of. Now I've gotta show this picture... 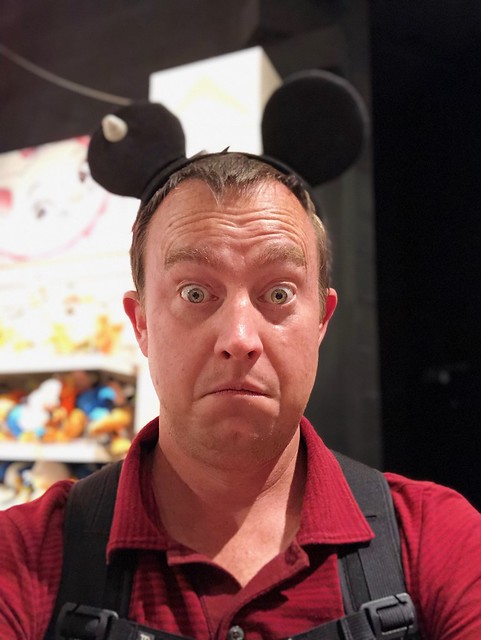 Note the antitheft tag, as I certainly didn't pay money for this. 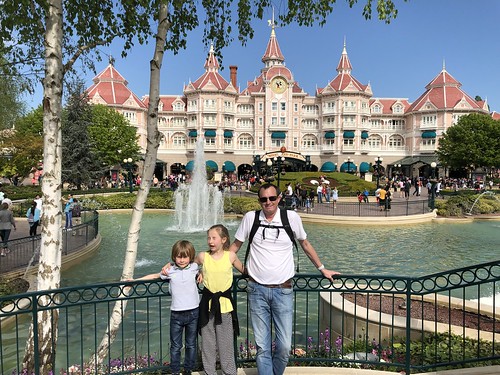 This is the fancy hotel that requires a second mortgage, but where you might bump into Mickey Mouse at the breakfast buffet. The architecture is very "Victorian American". 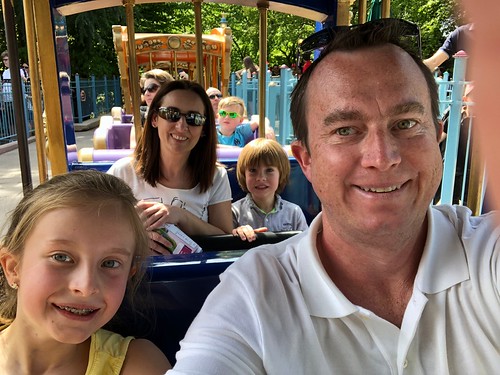 The only rollercoasters I can go on are the ones where you have to wait in line with a bunch of sticky-fingered toddlers who don't yet understand how queues work and can sometimes get away from their parents if the parents don't look up from their smartphones.

This one, for example, would be too much for me and Nora:

Very clever idea for turning a Toy Story character into a ride, though, don't you think?

This one was a definite nope. They said that later they were spun around in the dark, looking for Nemo, I suppose. They both loved it. 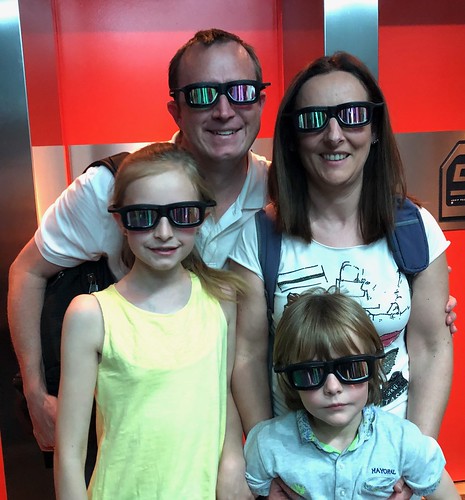 One of the cooler, though nauseating, rides we went on was in the Star Wars area. About 30 people "boarded" a "spacecraft" with 3D glasses on, which was really like a small cinema. But the entire cinema could be tilted and jolted. So they could tilt us all back so we felt pressed into our seats when we went into hyperspace. The entire ride was 6 minutes long, one of the longer rides. I very much appreciated the creativity and storytelling with my brain, but my stomach was not okay for another hour. 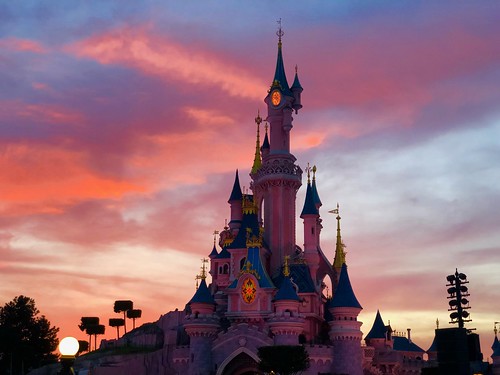 We got lucky and had this gorgeous sunset just before the closing ceremony, which is a light show projected onto the castle itself. My wife and I might've been the only adults who weren't recording it with our phones. It was pretty amazing. It was so good that we went back to see it the second night, although we got there later and didn't have a very good viewing angle. If you want to see it nicely, you really need to sit down in the roundabout in front of the castle at least 90 minutes before it starts.

Oh, look, here's a video I can share with you that is better than what anyone there that night recorded!

It was pretty impressive in person.

The second day we chose to intentionally go to the Walt Disney Studios Park. We had lower expectations, but were pleasantly surprised. A lot of it was taken up by Marvel stuff, which my family knows nothing about, but even so, the choreographed punch-em-up superhero show was entertaining, and much better done than the DC heroes at the Warner Bros park. 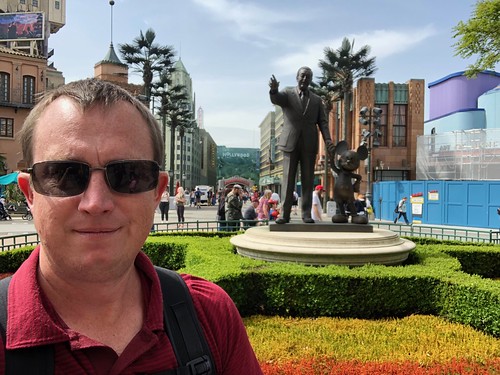 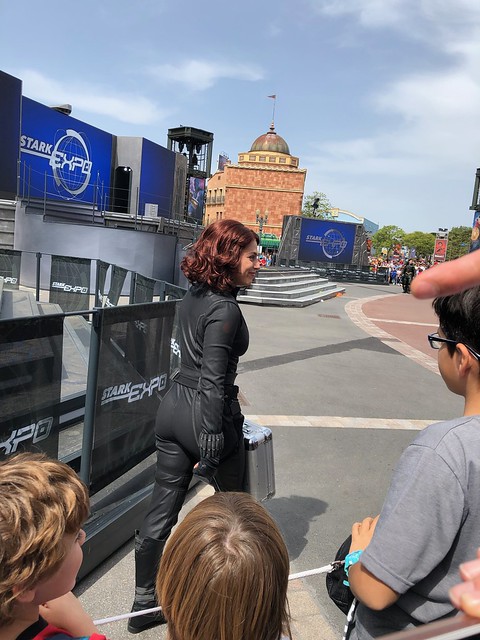 Ian was too shy to high five Black Widow (had to look up her name just now). 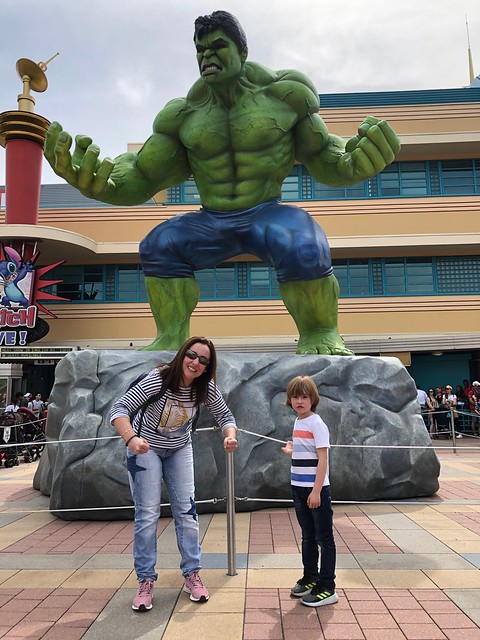 "Why is Mommy so angry?" 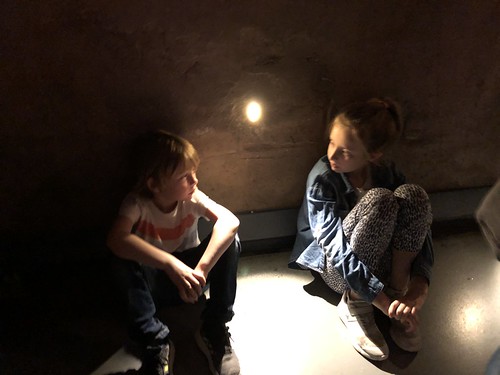 Hostages. There were four times where we got to the end of an hour long line and the announced that the ride was broken and that they were repairing it as fast as they could. One of those times, it did get fixed in about ten minutes, but the rest of the times, we waited for 15-20 minutes before bailing in a huff of frustration. The problem with being in a room full of people from all over Europe when they are announcing something over the intercom in 4 languages is that no one shuts up until the language they understand is being spoken, resulting in no one hearing a goddamn thing. 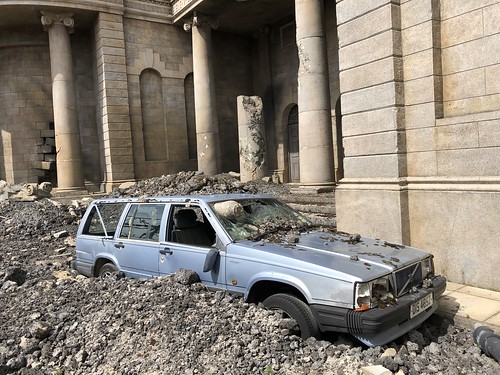 When we got back to our car, we found this... No, I kid. This was part of an interesting little train ride "teaching" us about tricks of making movies. 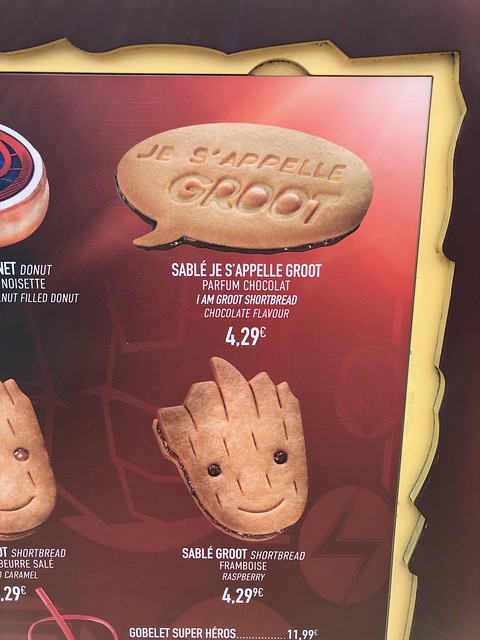 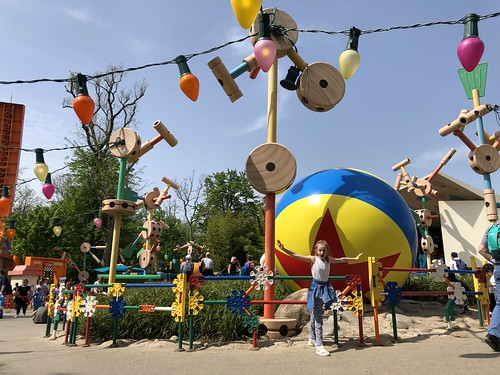 The decorations in Toy Story land were pretty cool. The whole park was interesting to me, but not all that magical, as I have heard adults describe the original Disneyland in L.A. I think I'd've enjoyed it more if I could've Thanos'd half the people away.

Look at all that Marvel knowledge! 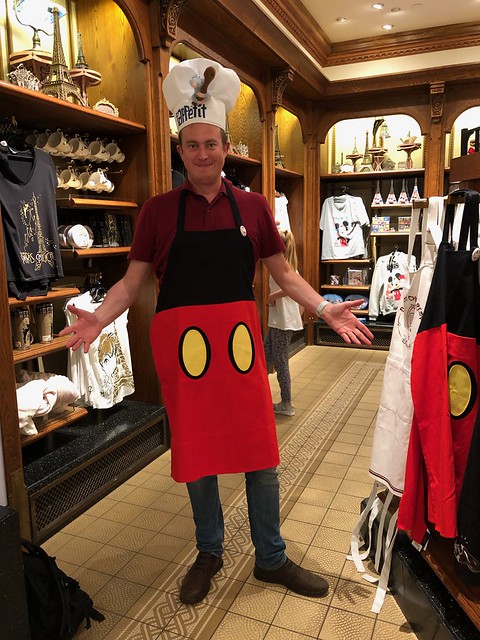 If I were more of a Disney fan, I think I might've bought some things, but I'm just not.

One of the rides we enjoyed so much we went back to do again the third day was the Ratatouille ride, which simulates, with 3D glasses, the experience from the movie of being a mouse running through a busy kitchen.

We had to force our children to choose mementos to purchase. Ian really wanted a lightsaber – I mean, who doesn't? – but there are several versions of toy lightsabers: ones that extend with telescoping plastic, ones that make noise, and ones that extend with light in an always-extended plastic tube. We let him get the nicest kind, which was 40€. It's really a dumb toy, because it's not safe to play with at home and it's for hitting things, so there's no way it's going to survive more than an hour or two of play, but it was really the only thing he wanted. Nora got a t-shirt.

The other ride we did twice was the Pirates of the Caribbean. My wife remembered it fondly from 22 years ago. I piped up to mansplain that it couldn't have been around 22 years ago because the movies aren't that old, only to be put in my place upon asking Wikipedia. I assumed that all the rides were based on media properties, not that media properties would ever be based on rides, but I was quite wrong in my assumption. 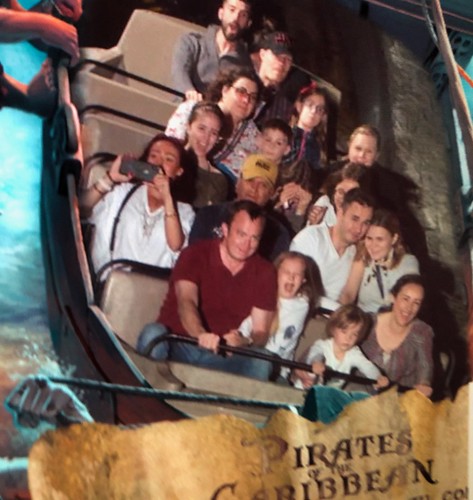 Both times we got to sit in the front of the boat. There were two little drops of a couple of meters each in the ride, and, knowing about them, allowed me to actually enjoy them the second time. 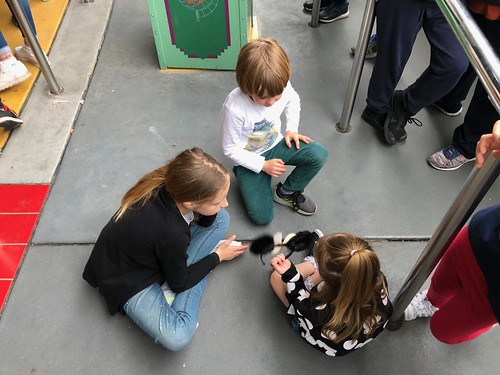 Not very often, given the vast number of chances, but a couple of times my kids made friends with some of our queue neighbors. 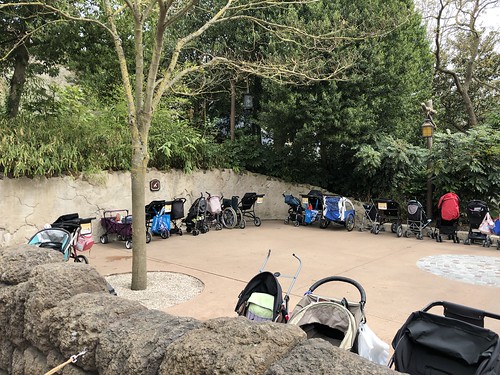 If you'd like to steal a stroller, Disneyland is a great place. 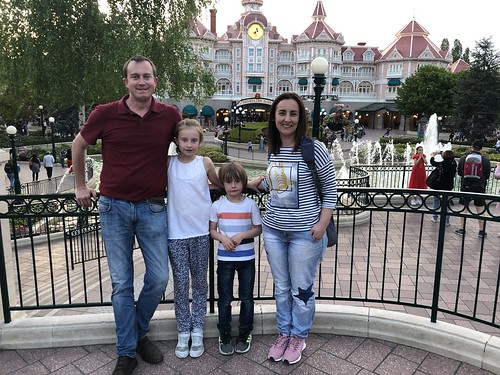 At the end of the third day, we were thoroughly exhausted. Part of the problem was that we had figured out what the FastPass system was. If you don't want to pay more, you can still go to certain machines, next to certain rides, early in the morning and scan your entry ticket. The machine will spit out a ticket that is good for jumping the queue at that ride during a certain 30 minute window later in the day. While this seems like a great time saver in theory, what it really does is provides a rigid structure to your day. Several times we decided that we couldn't do something because we had to be at such-and-such a ride in 50 minutes. The FastPass system only added stress and misery.

I think two days could be a better length of visit to Disneyland Paris. We experienced all the same psychology as in the Warner Bros park: slowly growing hatred for the park's ability to make us stand in line for an hour, followed by 2 minutes of a ride, followed by "That was awesome! Let's do another one!", and repeat. As I concluded in the WB post, it's the perfect example of Daniel Kahneman’s idea of the Experiencing Self vs. the Remembering Self; the vast majority of your time in the park is spent in misery, but when you look back, you only remember the sliver of time that was spent in elation. No one has finely tuned this psychological machinery as well as Disney.