Several times earlier in the week, we noticed that other people were having champagne for breakfast, and on Friday we had tickets to the opera, so we decided – what the heck! — let's have some champagne for breakfast. After breakfast, we did the last must-do item on our list, entering and touring St. Basil's Cathedral, the iconic one that has become a symbol of Moscow, even more so than the Kremlin itself. By chance, we got there right at 11am, just as the gates opened. We ordered a single audioguide, after we discovered that ordering one each for the Kremlin cathedrals tour was overkill. The audioguide, however, was not very interesting, full of years and dates and blah blah blah that goes in one ear and out the other. The inside of the cathedral was interesting, and similar to all the others, painted decoratively from floor to ceiling. 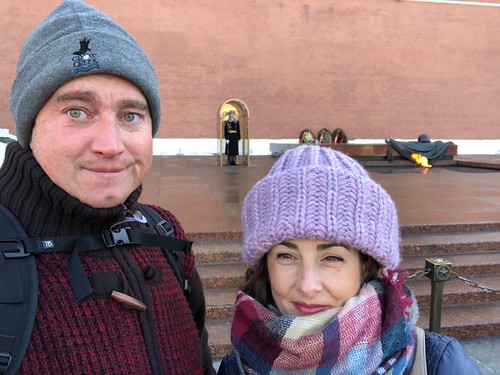 The tomb of the unknown soldier, an eternal flame that is guarded during the day by two still soldiers. There is an opaque part at the back of their little transparent booth that we hypothesized must be some kind of a heater. We walked by this flame many times as it was on the way between our hotel and Red Square. 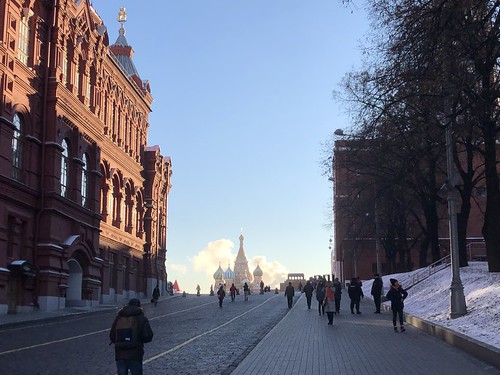 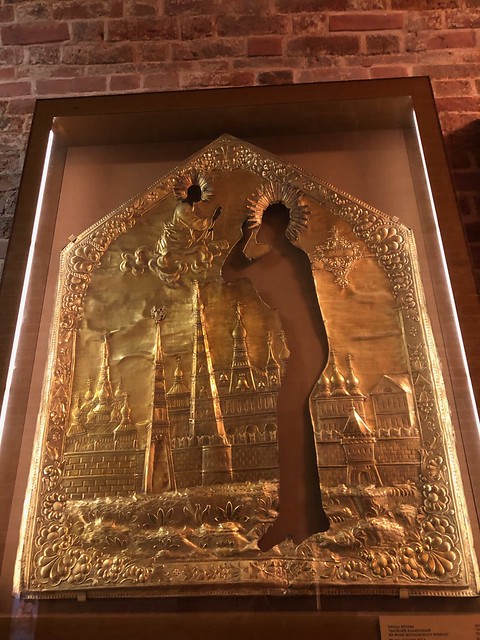 The cathedral contained plenty of Christian works of art, but this one was the only one that I liked enough to snap a photograph. The Kremlin and the negative-space Christ was cool. 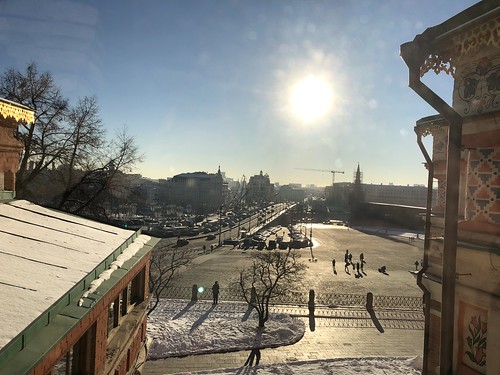 View across the Moskva River from inside the cathedral.

The central tower of the cathedral. There was a group of men in the central chamber who sung a cappella hymns. They were unbelievably good. They had CDs for sale, and a sign up with a video camera with a line through it, requesting that they not be recorded, but it's 2018, and everyone recorded them. 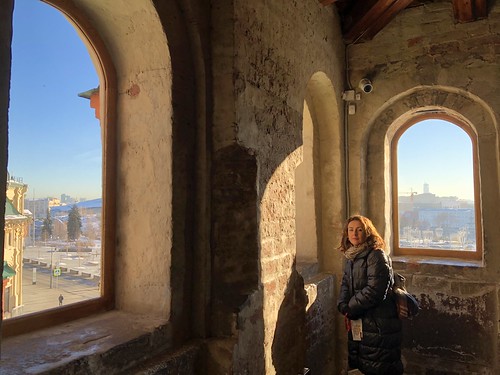 Of course, that far north, near the solstice, it's almost always Golden Hour. 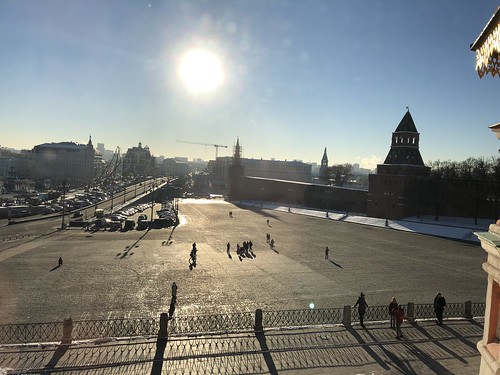 Another view, from inside the cathedral, to the lower part of Red Square towards the river. 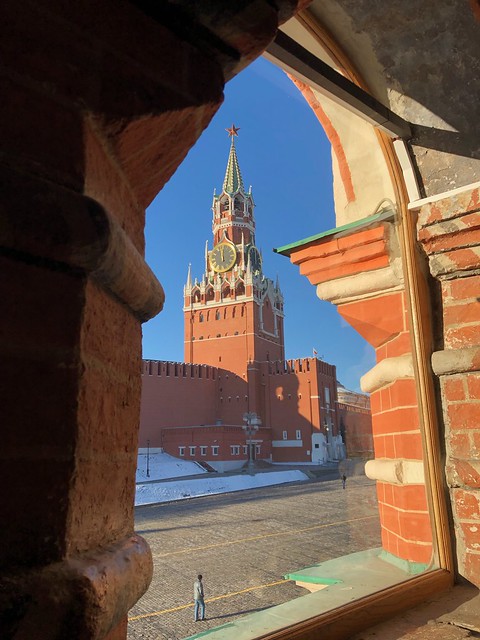 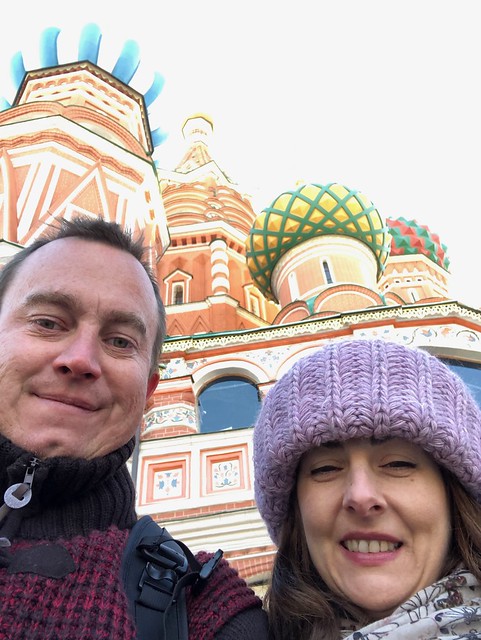 Farewell selfie from outside the cathedral. I'll probably never set foot in there again, but I'm glad I did.

After the cathedral, we walked around Red Square, browsing the shops that were set up for Christmas. Part of me wanted to ice skate on Red Square, but we decided not to. 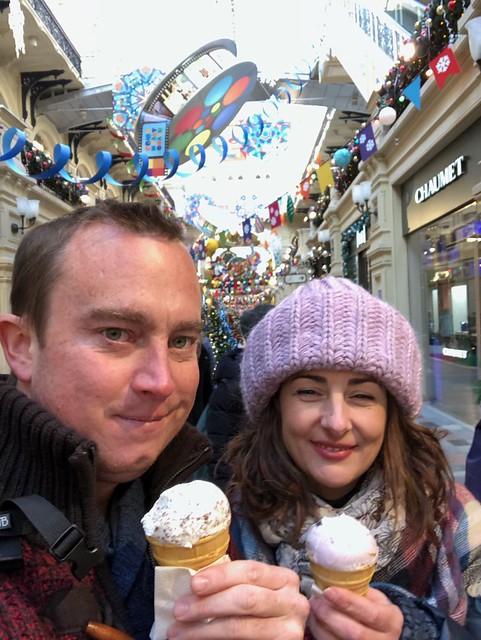 Ice cream in the GUM is a must-do. Despite how counterintuitive it is to eat ice cream when it's -10ºC outside. Moscow is famous for its ice cream. 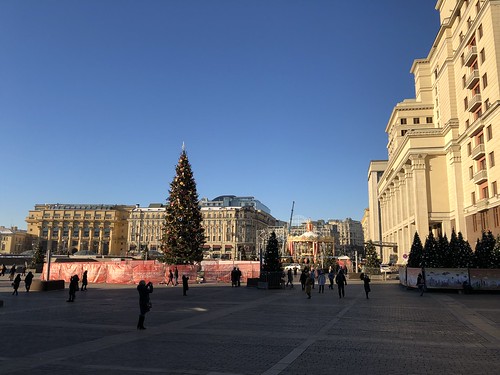 In the week we were there, we saw the number of Christmas trees rise exponentially.

After a brief stop at the hotel, we took a walk along the famous Arbat Street, a pedestrian street that would make any European feel right at home. It was touristy, and we tired of it quickly, deciding to walk along a side street. Eventually it was lunch time and Google Maps said there was an Uzbek restaurant nearby, which we decided to try. Due to being an 88% muslim country, Uzbekistan, there was no alcohol on the menu. We had some mediocre soup and salad, all very bland, lacking salt. Our green tea was good, though. 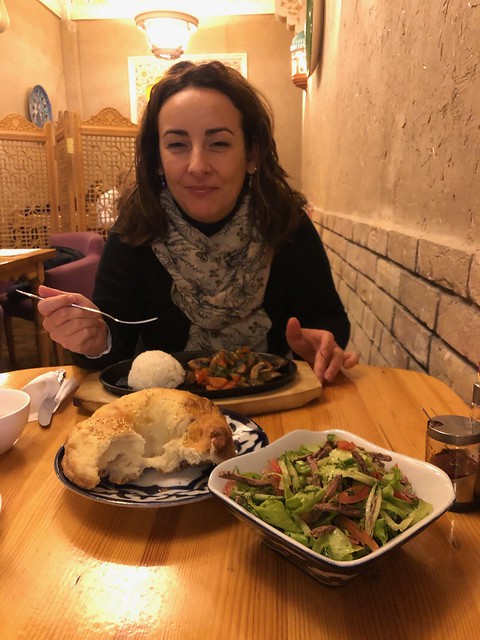 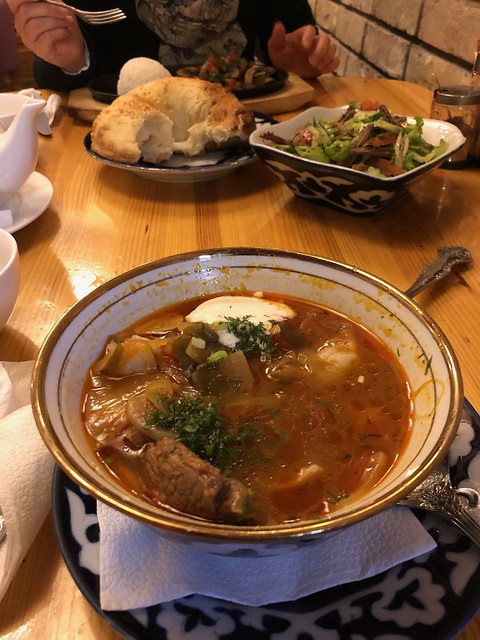 Some sort of stew. 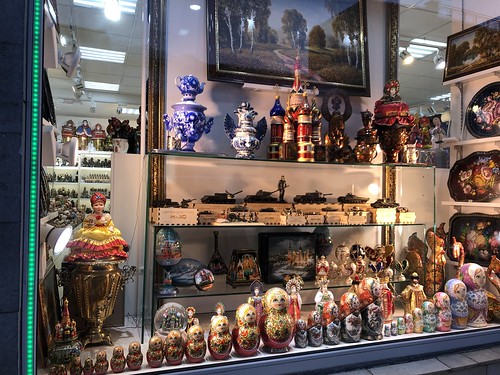 We actually managed to successfully visit Moscow and not purchase a single matryoshka doll. We don't need any other things to clean dust off of.

After lunch, we walked all the way to the area near the Bolshoi, the famous theatre in Moscow, where we had opera tickets at 7pm. We entered a shopping mall where we were not the right class of people. A pair of sneakers was 750€, and we saw a not-that-impressive-to-us fur coat for 13,000€. On the ground floor, there was an Apple Store, so I got to paw at the newest iPads, which I had never touched in person. Soon it was time to head to the Bolshoi. 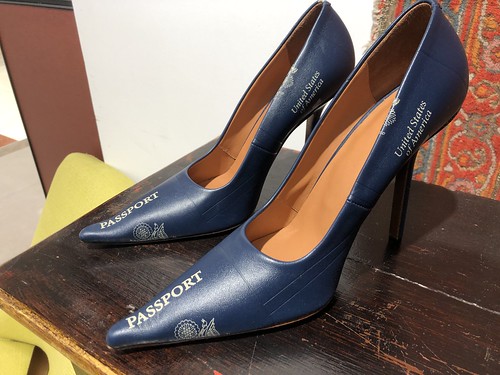 I care less about nationalistic symbology than most people, but something about these shoes struck me as offensive to Americans. Perhaps that was the point? 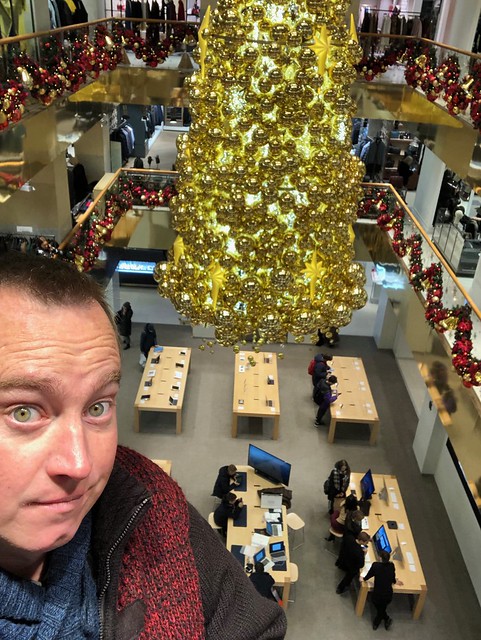 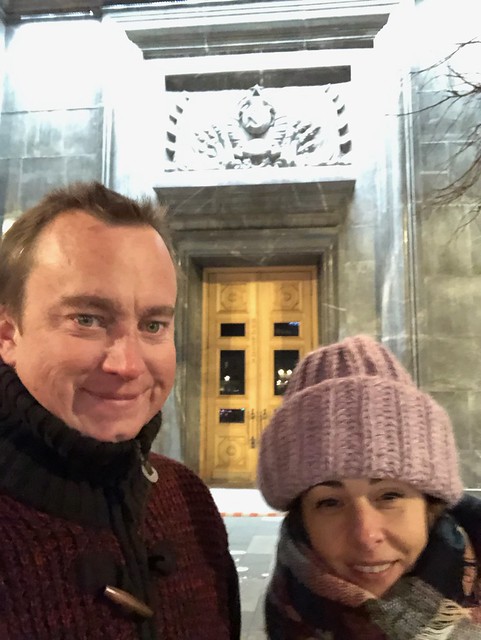 Selfie in front of the KGB building.

We had purchased our tickets online, for the only show available during our visit, La Bohème, which we had never heard of. It turns out to be one of the most popular, most performed, operas in the world. We walked up the grand steps of the Bolshoi like we belonged there, despite my blue jeans, and I showed the PDF of our tickets on my phone to the guard, and he said something and pointed to his right. So we went one door to the left and did the same thing, and got the same response. At this point, the next door was around the side of the building, and the guard there told us that we had to across the street to the next building over. It turns out that our opera was being performed not in the historic famous building, but in a newer "New Stage" built in 2002. Oh well, it still counts as The Bolshoi.

Inside, the elegant upper class were clinking champagne goblets together, but we were concerned with finding our seats. I asked several ushers as they pointed in the direction for us to go and ask the next usher. Finally, we got to the door, and the man there gave us a big fat Nyet! that we have become accustomed to hearing. So we went back to the previous usher woman, and she said, "Well yeah, obviously you can't go in until the bell rings!" Experienced opera goers are now laughing, I'm sure. About 8 seconds later, the bell rang. 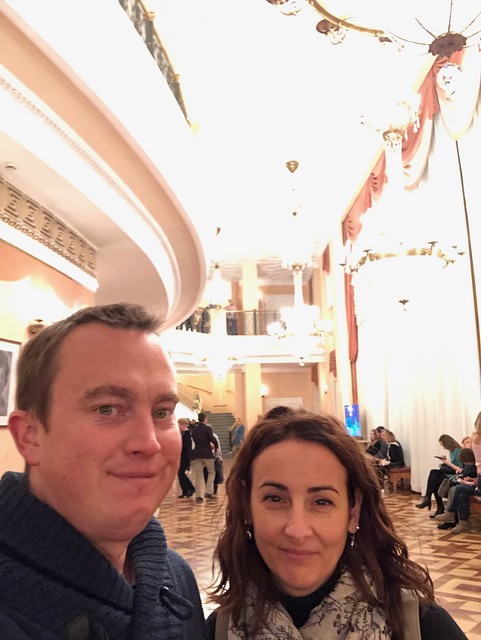 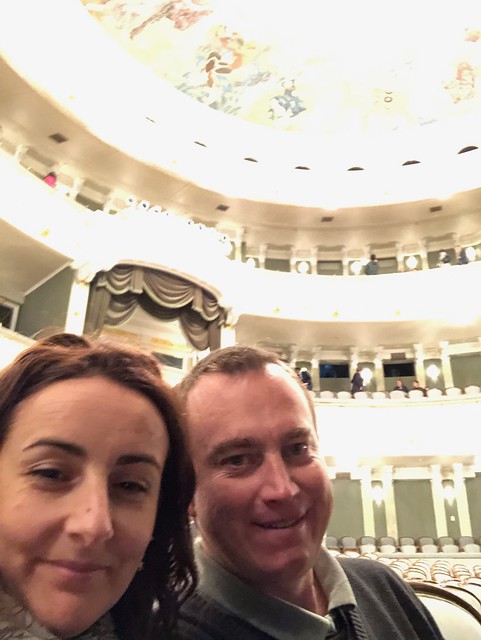 At our seats, before the rest of the crowd shuffled in. 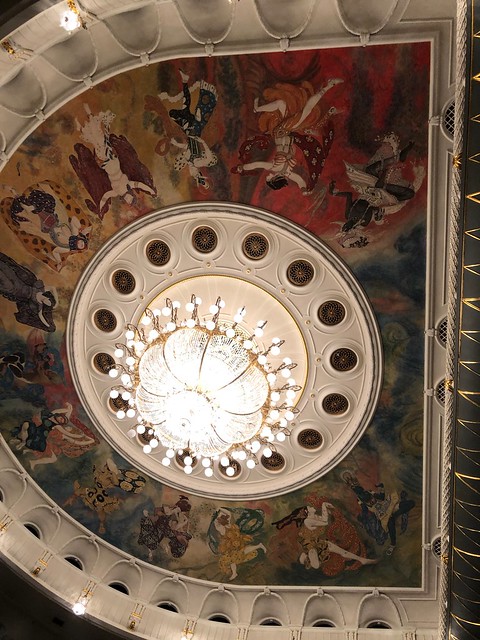 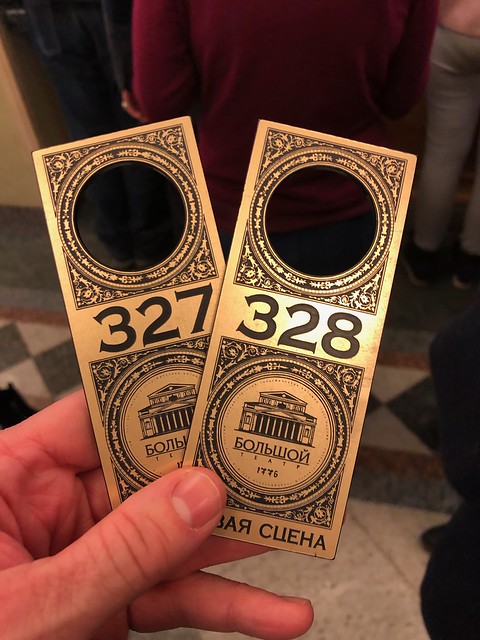 At almost every establishment in Moscow, they have a coat check, where you leave your big heavy coat from outside with a guy in exchange for a little numbered token that you can use to exchange for your coat upon leaving. These were some of the nicest. Maybe its because we had just swung by the KGB, but I can think of so many opportunities for dead drop espionage involving swapping someone's coat token.

Our seats were excellent, on the third row, decently centered. The opera was in Italian, with subtitles placed on monitors in Russian. Let's just say that it's good that we had read a plot summary before we got there, because otherwise nothing would've made sense. Two characters fall in love in the first act, acts two and three are mostly a blur, and in the final act, one of the lovers succumbs to tuberculosis. All the articles I had read about the opera said that, no matter what you think of the rest of the play, if the final death scene doesn't move you, you're dead inside. I was feeling really doubtful that I would be moved, as I didn't really like or care for any of the characters (again, whose words I could not understand). But holy crap they acted the hell out of the last scene! It was a deliciously emotional dessert at the end of a fairly boring meal.

Don't get me wrong, the music and singing were amazing, but it was just sounds to me, with no meaning. Even if it were sung in one of my two languages, I think I might not have been able to follow along. I appreciate that others like opera, and all the best to them; I guess now I know how some people feel when I say that I like golf. I've been to one opera in my 20s, one in my 30s, and at age 40 and 1 month, I think this one will do for this decade.

After the opera, we had a fairly disappointing final supper in Moscow, accidentally stumbling into a chain restaurant that we had been to once, but this time got considerably worse service. Oh well, you win some you lose some... 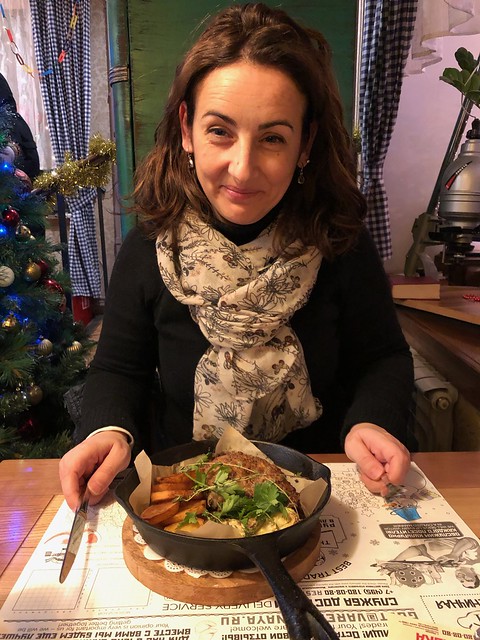 Post opera dinner for the lady. As you can seee, it's the kind of chain restaurant where you can do puzzles on the placemat with crayons left at the table. Classy! 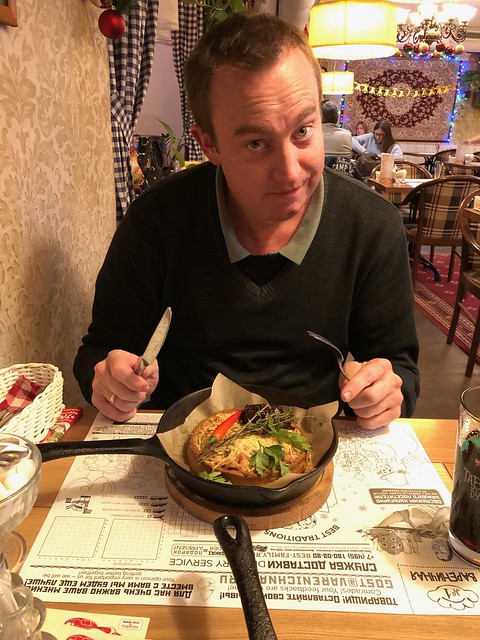