We started Thursday with a trip to Izmailovsky Market, which was recommended to us by our Metro tour guide the night before. It was by far the most interesting thing that not one of our Russian contacts had mentioned. I'm certain that during the summer, it is packed with people, but in the winter, it was a little barren. The place is sort of like a "wooden castle fairy tale land" more than a "market". However, on the way from the Metro stop, we stopped into a place to take some money from an ATM machine because we were told that one could bargain with the vendors at the market, and the intersection of "places where you can bargain" and "places where you can pay by credit card / Apple Pay" is tiny if non-existent in my experience. In the little shopping place where the ATM was, a shoe and coat and hat store caught Marga's attention. The little Asian woman – part of me wondered why there were so many Asians in this European city, but then I remember that Russia actually borders China, so... – knew enough English to tell my wife that the boots she was eyeing were both cheap and good quality and looked good on her. While she was trying on boots, I explored the hats, as I only have one woolen flat-top hat, and I'd like another, just in case. I found one that I liked and then had fun trying on some of the "typical Russian" hats. 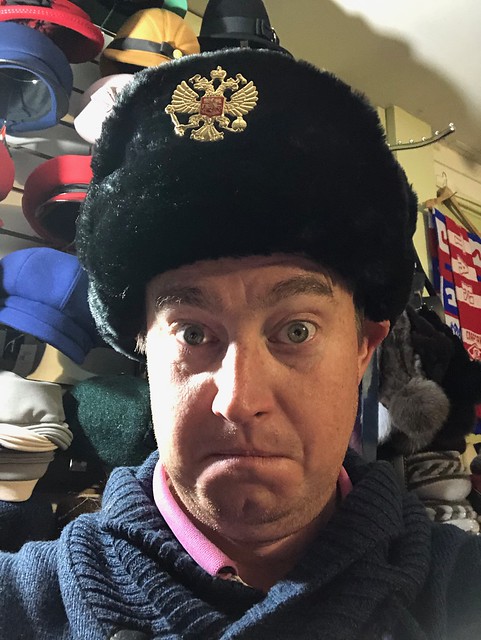 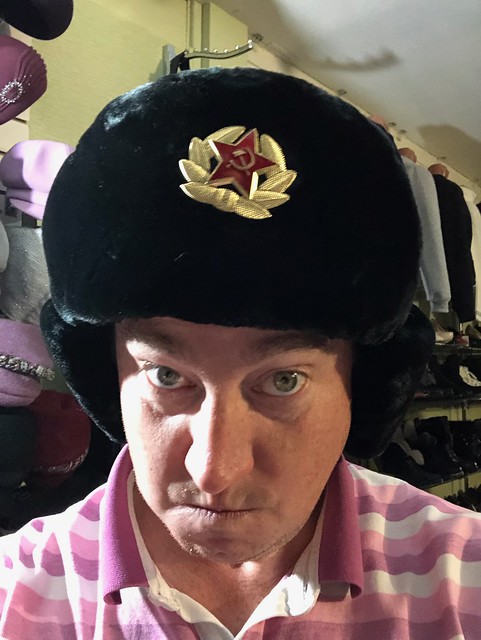 These hats are way too warm to be worn in Spain.

When I expressed some doubt as to the price of my hat, the woman was quick to counter with another offer, thus informing me that the price was negotiable. The way the Russians tell you how much something costs, because learning how to pronounce large numbers in a foreign language is difficult, is to type out the value on a calculator and show it to you. I more or less offered the original price of the hat, plus a little furry stuffed bunny that I know my daughter would like, thrown in for the same price. When she suggested a higher price, I refused and started to put the things back on the shelves. That's when the Big Brother thing happened. She turned to the security camera in the corner and said something in Russian. The security camera talked back, and they exchanged about three sentences back and forth before she told me that my offer was acceptable. WTF!? Decision Maker behind the camera had been watching us the entire time.

When Marga finally decided which boots she wanted to buy, the same thing occurred, where we bargained low enough such that Decision Maker had to be consulted. The price was 4,000 RUB (53.13 EUR), but when it came time to pay, my wallet only contained 3,925 RUB (52.14 EUR). I considered going back out 5 meters to the ATM, but I shrugged at the camera with my best clueless tourist face (it comes easy), and after 20 seconds, Decider relented. After which we went right back out to the ATM to get out more money. 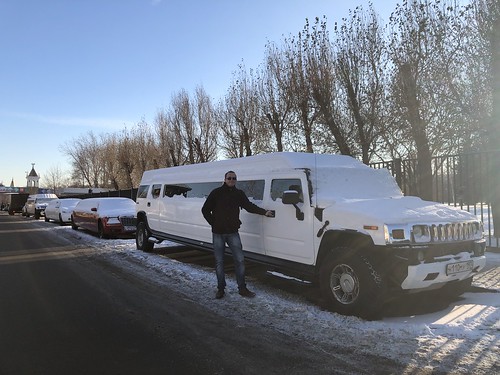 We passed some parked limos on the way to the market. That they are parallel parked so well seriously impresses me. 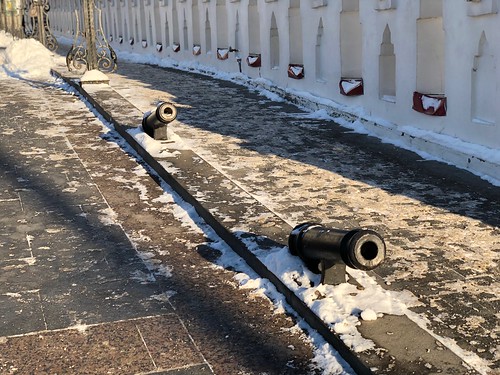 Foreboding bollards on the bridge. 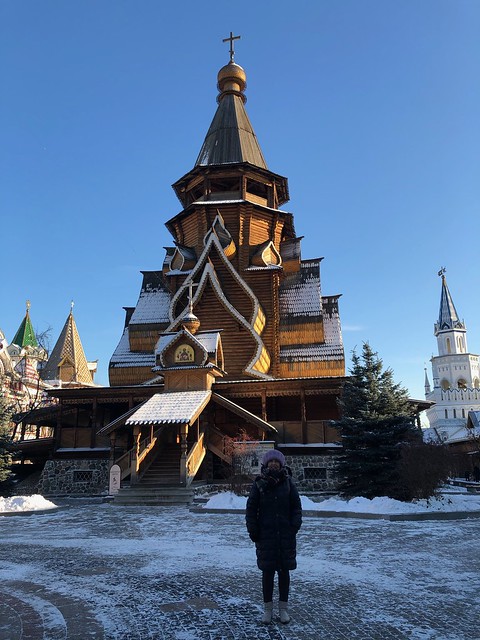 The Russian architecture is unlike any I've seen. 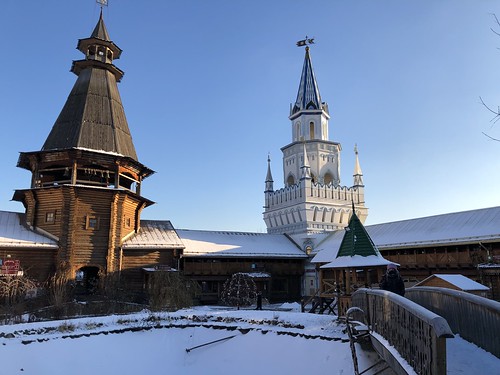 Inside the winter wonderland of the Izmailovsky Market. I imagine it could get full of little kids and be sort of like Copenhagen's Tivoli in the summer. 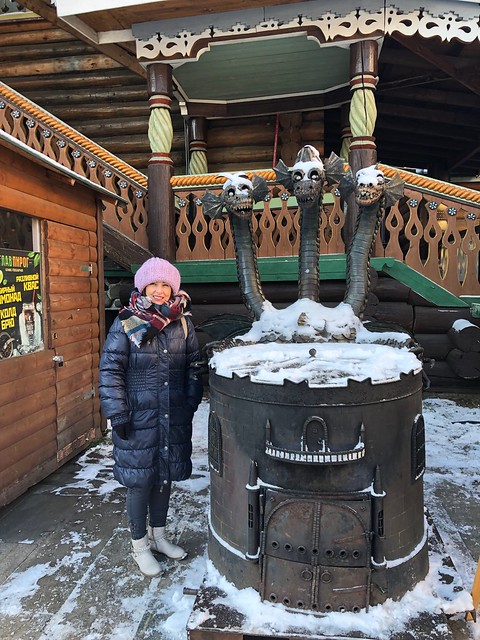 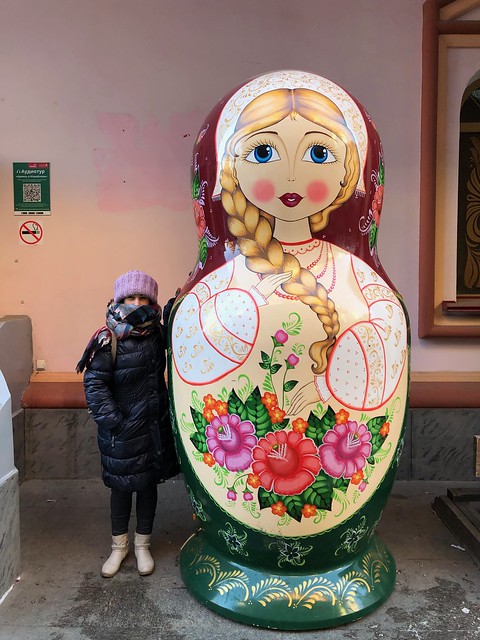 I wonder what the world record is for number of stuffed matryoshka dolls is? ...googles... 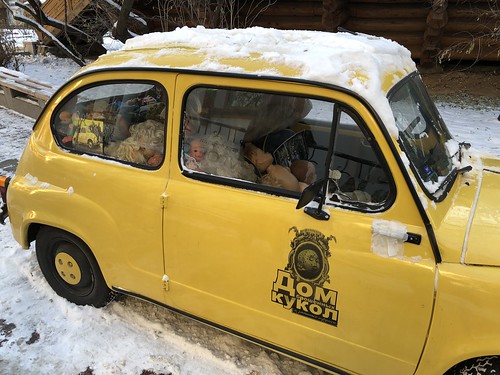 For some reason there was an old taxi cab full of doll parts. CREEPY!

The actual "market" was pretty empty, but it did contain a site that had piqued my interest on the map: The Vodka History Museum. Inside, we found a single woman, about our age, running the entire office. While we were waiting, some Chinese tourists came in, and one of them started wandering around the museum; she had to shout, "Sir! Sir!", which didn't register to him as referring to him, and she explained, "Hey man, you gotta buy a ticket before you can wander around!" We happily bought our entry and tried to buy one of the little audio guide apparati, but she told us to just use our smart phone, going to a certain website and then tapping on the number that corresponded to each section of the tour. This worked very well sharing my AirPods. More tourist destinations should have apps with the audio guides, especially ones that you could pre-download back on hotel wifi before arriving at the destination. Coming soon, no doubt.

The history of vodka went all the way back to the first time that people noticed that wheat left in water after a while made people feel a little trippy, and thus began the investigation into distilling. Some of the earliest vodka was absolutely rancid, and people would have to sniff their stinky sleeves after taking a gulp just to stand the stuff. Then we went up through the tzars and other rulers, with prohibitions and promotions, up to present day, where vodka is a source of national pride. 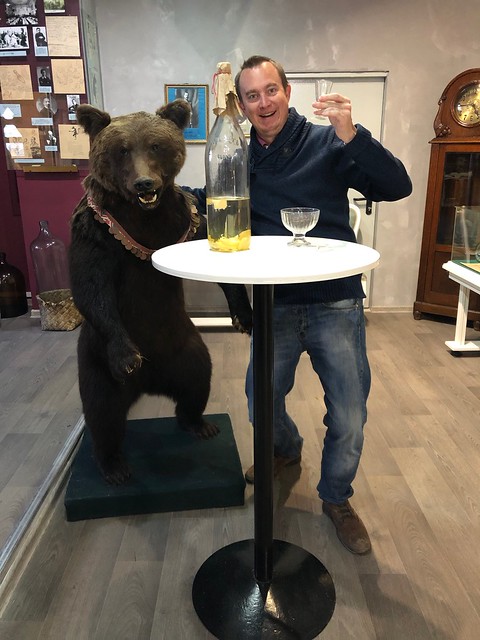 I'm bullish on the markets, but my friend...not so much. 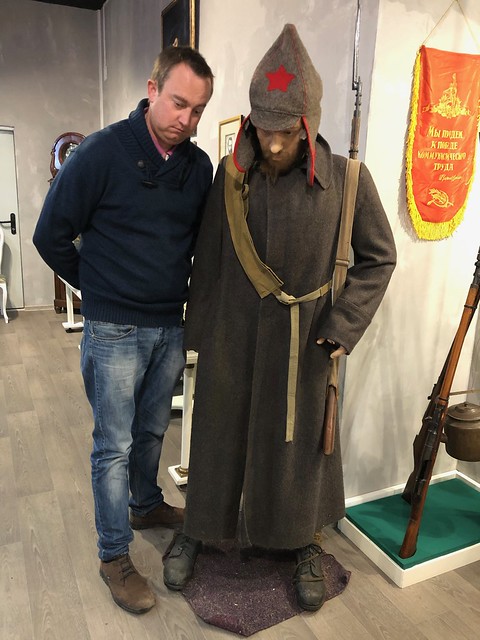 My soldier buddy was also sort of a downer. 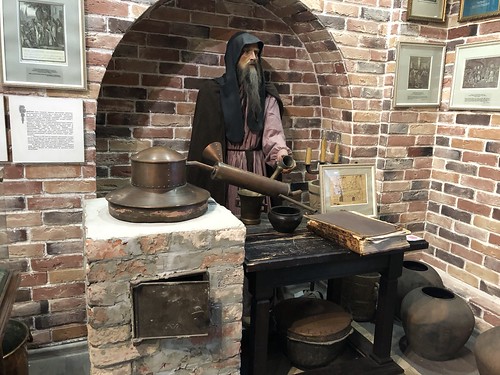 Vlad the Distiller was too focused on his work to chat. 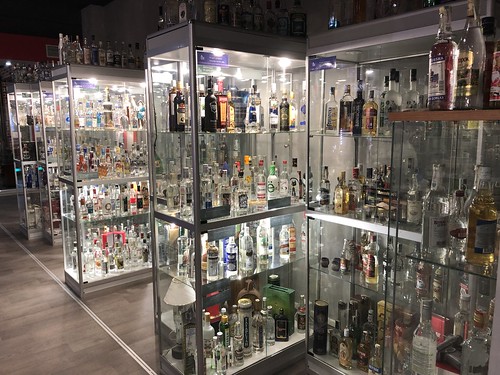 They had a few bottles at the vodka museum. In fact, a lot of the history involved bottle manufacturing.

When the tour was done, finally, we got to the degustation! Yay! For a mere 150 RUB (exactly 2 EUR), we got to pick three different kinds of vodka shots, each split into two not-that-tiny glasses for us to share. Two were for sipping, and the final was for a single shot. I managed to convince the missus that we'd not have this opportunity again, so we repeated for another three vodkas. We had chosen best the first time, but now we knew! 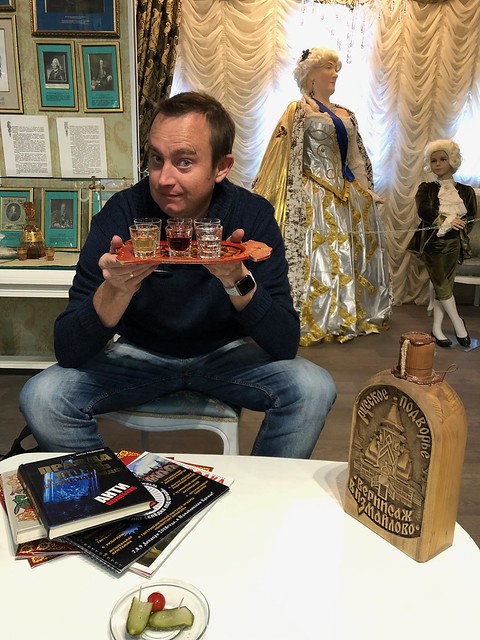 We were instructed that it was important to eat the pickles immediately after the shot, like lemon chasing tequila. 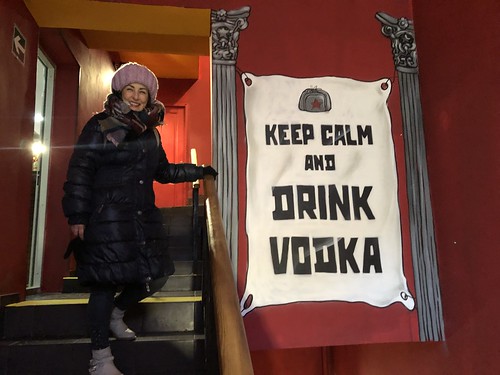 After departing the market, we walked about 800 meters to another site of interest: Stalin's Bunker! It is now part of a fútbol stadium. It was quite hard to get to, and didn't look like anything at all. We asked the security guard protecting the gate if we could get in. He gave us the usual helpful Russian response of, "Nyet! Clyosed!" After a bit of puzzled exchanges, he ushered us through the gate and pointed at a sign in English: "Stalin's Bunker: must book at least 3 days in advance!" We nodded and thanked him for his (unusually) helpful gesture, and headed back down the icy sidewalk along a motorway back to the Metro station.

Before we got to the Metro, however, it was lunch time, and we stopped into a place labeled "Restaurant" (seasoned travelers we are!) Once again, we were surprised by how a random restaurant choice resulted in amazing cuisine. I had some "Lamb and Beef Khinkali (dumplings)" and a cheesy pot of "Suluguni cheese fried on ketsi with tomatoes", and Marga had a "Braised veal with tomatoes and greens on ketsi" (I took photos of the menu this time!), which was delightfully spicy, almost Indian in flavor. We washed it down contentedly with some Georgian beer. 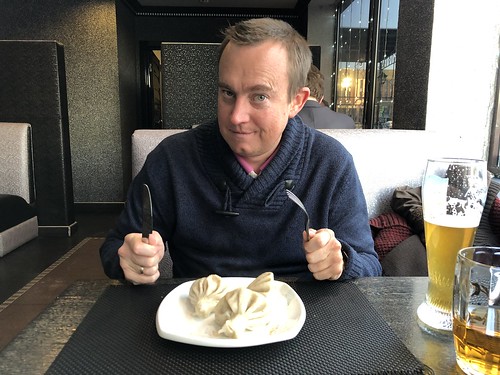 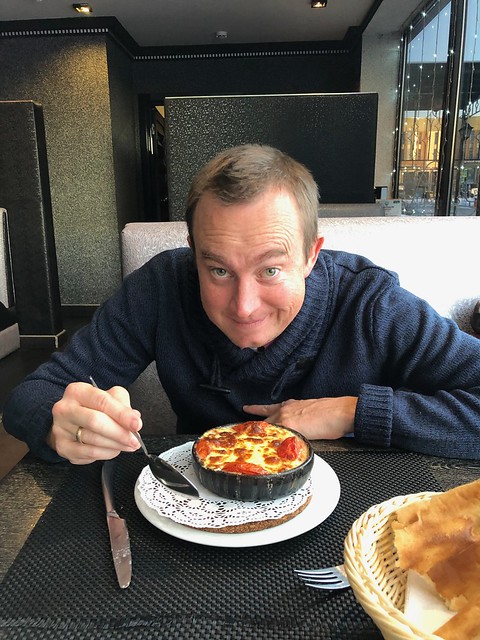 Suluguni cheese fried on ketsi with tomatoes. It was basically like spooning stringy mozzarella into your mouth. 🤤 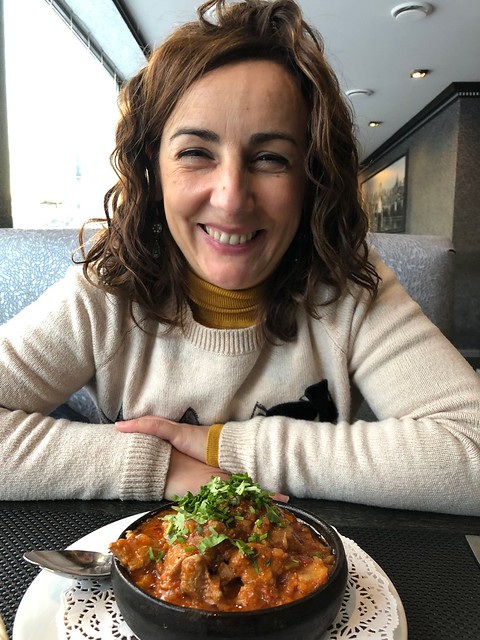 Braised veal with tomatoes and greens on ketsi. 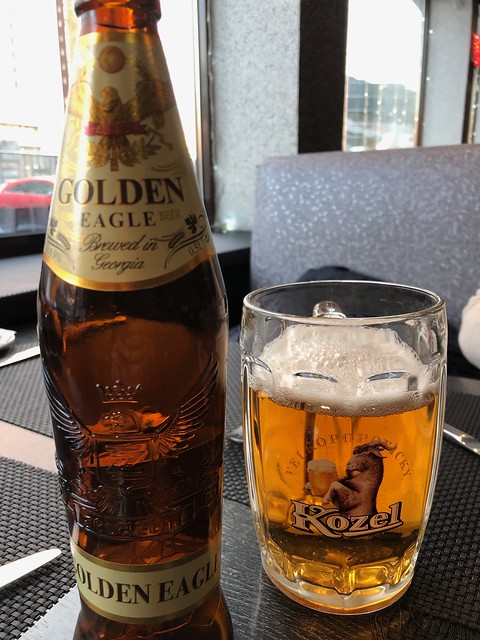 Again before we hit the Metro, we stopped by a shopping mall. We like visiting places where the locals shop, and this was definitely one of them. In a shoe store, Marga found some boots she liked even more than the ones she'd just bought, so we bought those as well. Then it was off to the Metro to head to... 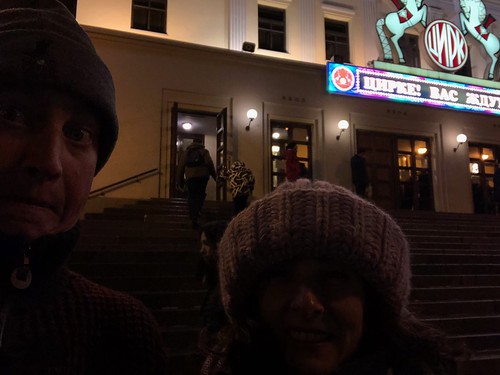 The Nikulin Circus was one of the items mentioned to us by several helpful locals. It dates back to 1880. When we got to our seats, which we had booked a few days earlier, we began to get a little worried, as every other group there had small children. Would this be too infantile for our tastes? Let's just say it did not disappoint.

It contained literally every ingredient I could name from a canonical "circus": jugglers, acrobats, dancers, clowns, magicians, well-trained animals, and tumblers. It would be difficult to pick a favorite part. The ushers were extremely vigilant about enforcing the no photos or video taping rule. The animals on display were some well trained dogs that would jump over one another, walk on hind and front legs, etc., some parrots that performed if they so desired, and two amazing horses that did some things I've never seen a horse do with very subtle commands from the trainer. The most impressive thing was to rear up on hind legs and then turn a complete 360º before going back down. The magicians did some things that I cannot explain, and the high wire acts were stunning. The two clowns were fantastic entertainers. The worst part was when one of the clowns was trying to dance with a kangaroo in a tutu that looked like it really didn't want to be there.

My theory is that in a city famous for ballet and opera, there must be a ton of "couldn't quite cut it" talent, and the local circus has benefited greatly for them. The venue is entirely theirs, by the way, and has been there since the 19th century, so they don't travel or anything. We were very impressed. 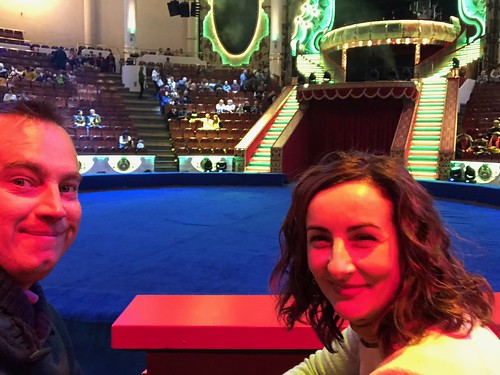 They had a very strict no photos or videos policy during the acts, but they did let us take pictures before the show started. We were right in the front row, such that we could feel the horses breathing when the put their front hooves up on the edge of the ring. 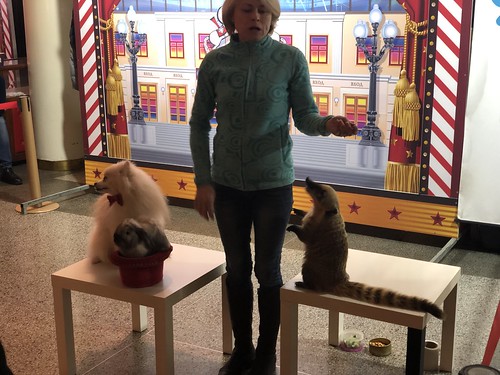 They had some monkeys and raccoons that you could pose with (not for free) out in the lobby.

Out late, for dinner we stopped at a place that specializes in a long beer menu and having the local fútbol game blaring on the TV. It was not a very good dining choice, but it was late. I had some spicy lamb sausages with sauerkraut, and Marga repeated the opportunity to have some borscht. 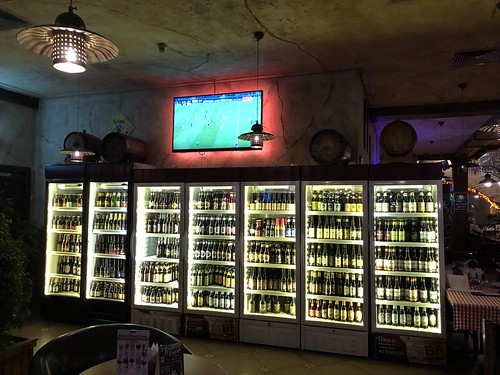 TV and beer! I think my voice just got lower typing that. 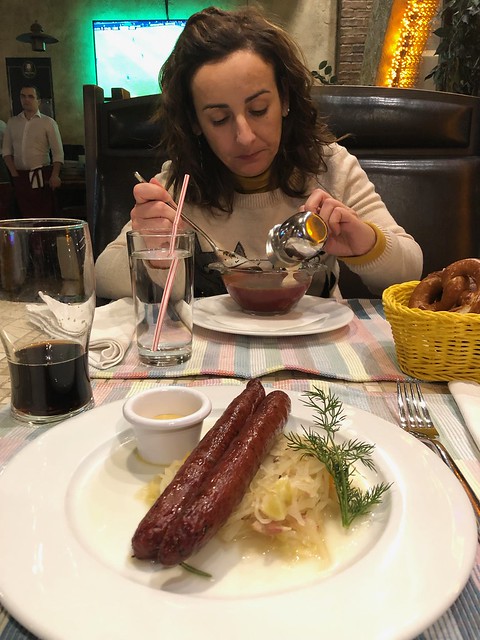 My wiener and my date. Oh, and we had a big pretzel, to continue the German vibe.

With one more quick stop to admire the superstitious bronze statues in the local Metro station, we headed to the hotel for bed. 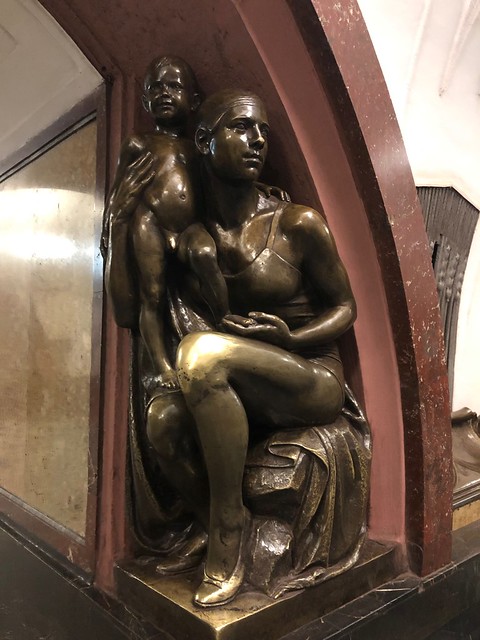 Notice how the penis is shiny from people wanting Y-chromosomed grandkids. 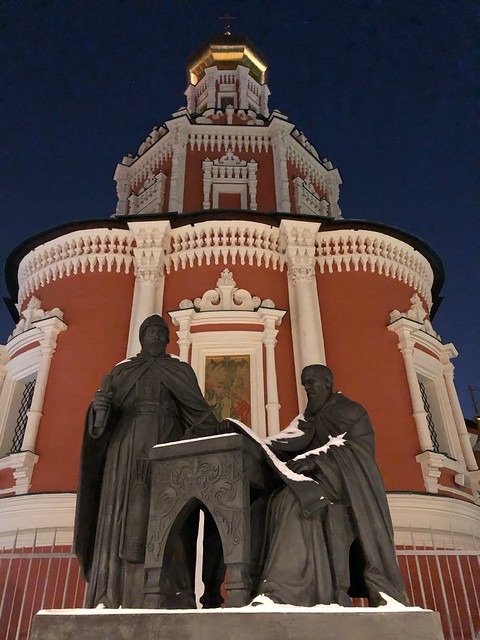