The first place we went on Wednesday morning was the Cosmonaut Museum. We had been told that it was fairly small, but that information was decades old, and incorrect. The first section of the museum was all dedicated to Sputnik and Yuri Gagarin, the man-made object and first man to orbit the earth. Also highlighted were the dogs, Laika among them, and other animals that went into space. Also featured was Valentina Tereshkova, the first woman in space, who is still living, at the age of 81. As the countdown for her rocket reached 5 seconds, she paraphrased a famous Russian poet and said, "Sky, take off your hat. I'm on my way!" Boom! That's almost more of a mic drop line than Neil's "one small step". 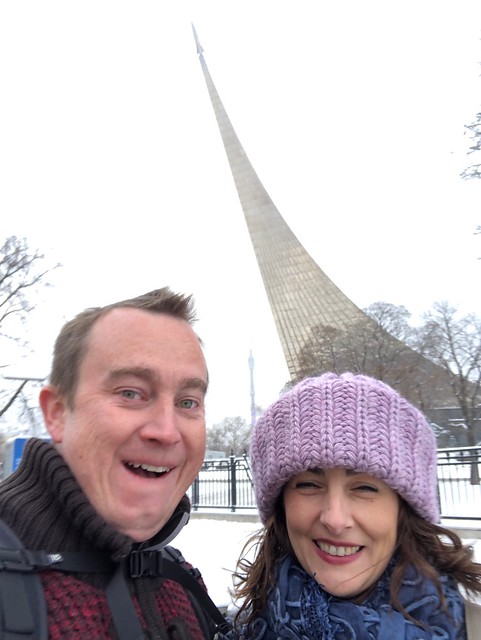 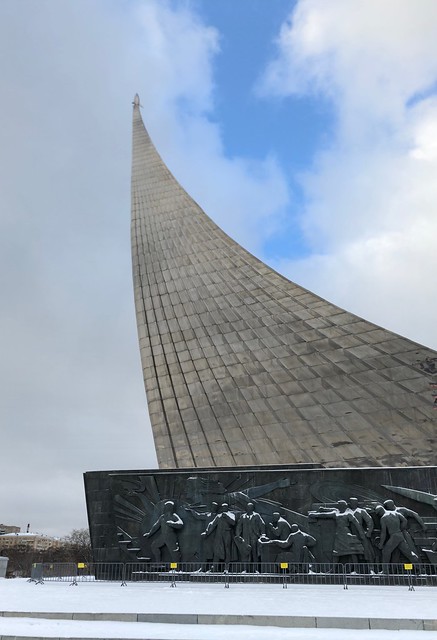 Credit to the workers down below. 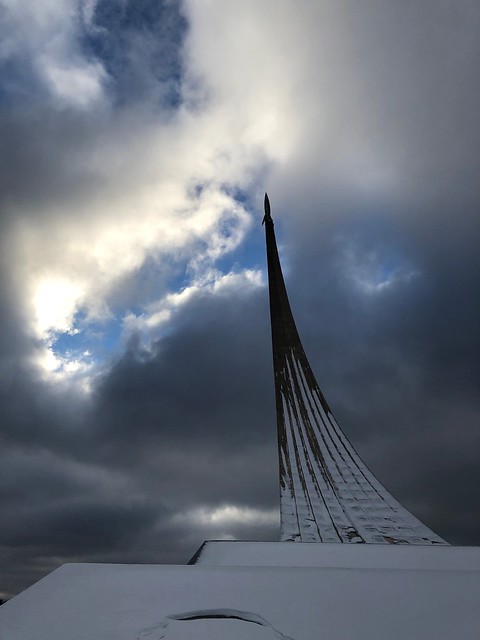 Could be an awesome sledding opportunity... 🤔 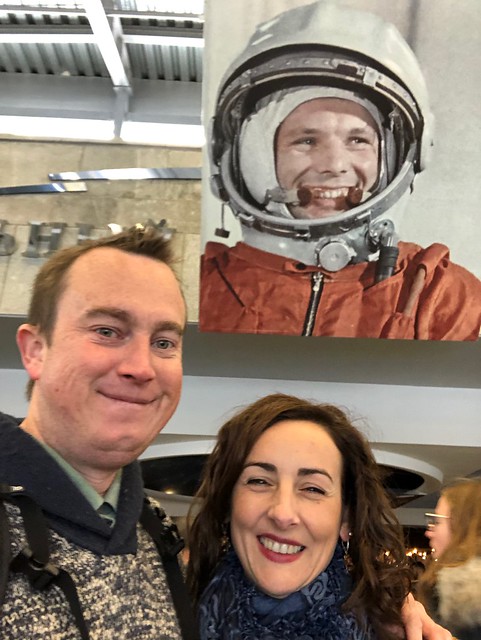 Yuri died young, so he remains youthful throughout history. He's one of the few non-politicians buried at the mausoleum in Red Square. 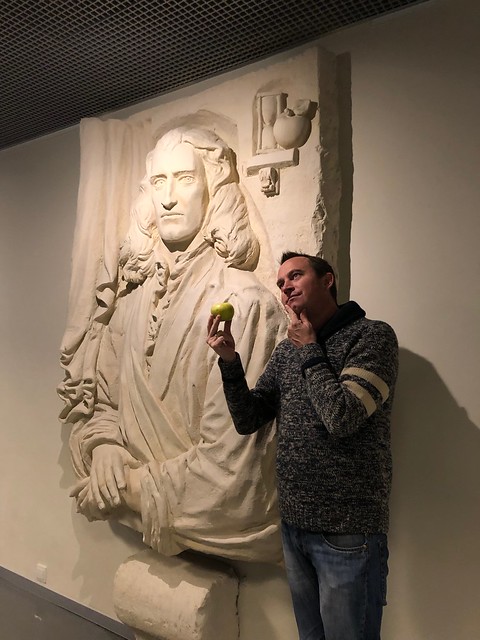 I had grabbed an apple from the breakfast buffet, never ended up eating it, but it was the perfect prop for this photo. 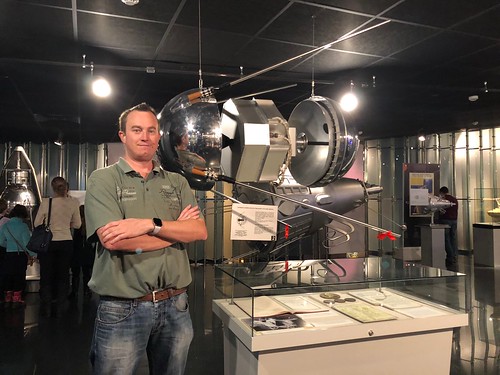 There were many replicas of spacecraft, at various scales. It was never clear to me, as most of the text was in Russian, exactly how big The Real Sputnik™ was.

The rest of the museum was all about the Russian space program. The USSR really accomplished a lot in the space race, as did their competitors. At the very end there was a bit about the Apollo 11 crew and Saturn V rocket, but it was very much targeted at Russian greatness. There were many classes of little Russian children running around and listening intently to their tour guides. I can only imagine the sense of national pride that such a museum must instill in the youngsters that visit.

I only wish we'd had an English speaking tour guide to help describe it all to us. The Mir, for example, was an outstanding accomplishment, but we couldn't understand much of the details surrounding it, as most of the plaques were in Russian only. 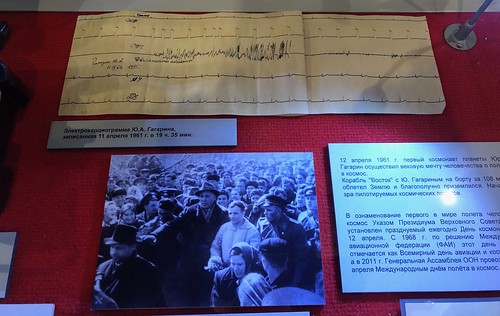 See that paper up top? That's Yuri Gagarin's EKG readout during launch. It must have been terrifying! 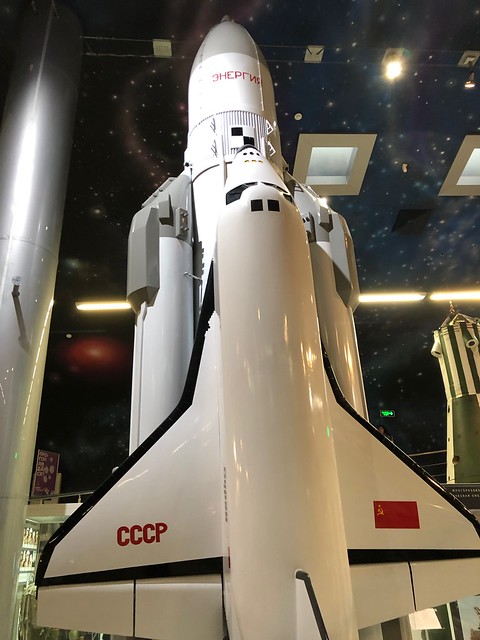 Apparently the Russians had their own Space Shuttle??? This fact was not reported to Americans, I think. Also, "CCCP" = "USSR". 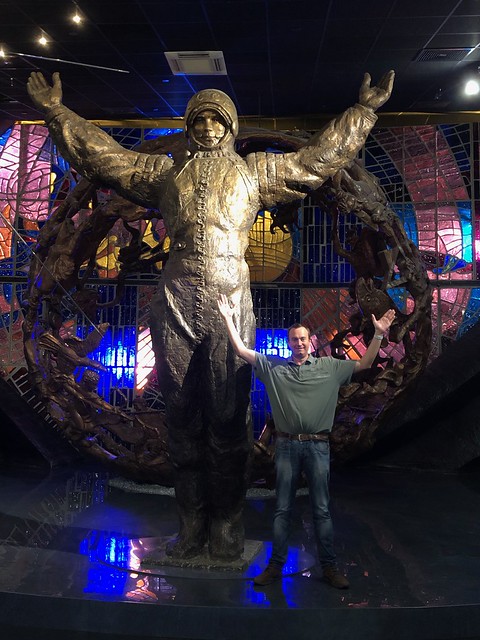 For lunch on Wednesday, we searched Google Maps for restaurants near the Cosmonaut museum. Very few results were returned, but there was one that claimed to be Arabic food, so we attempted to find it. We were clearly in "residential Moscow" for really the first time of our visit. We love walking the actual streets where people live and shop. The coordinates took us to a fairly dingy-looking hotel. We figured we were mistaken and walked away, but then on the other side of the building, we clearly saw, through the windows, what looked like a restaurant. Very cautiously we entered.

The waiter knew a surprising amount of English, given how remote we were from any tourism center. He sat us down at a table and tried to explain the menu to us, but his English fell flat. Luckily I had a Google Translate app on my phone that could translate menus on the fly. It translated all but a few of the words. For the mystery word, the waiter offered, "Arabic chicken?" Marga took the safer beef pilaf route, and I went for the Arabic chicken. Marga's dish started with two traditional Russian dishes, borscht and Russian salad, and finished with some rice with some chunks of beef on top. My meal was unlike anything I've seen. The main plate was full of rice, and then I had a bowl of what looked to be boiled chicken and something not unlike spinach, but with a very bitter flavor. Then I had a plate of what looked like ingredients that the chef couldn't be bothered to actually prepare: fresh garlic (stalks), a bunch of parsley, some spearmint, half a tomato, some black olives, some pickles, one green pepper, and one pickled spicy pepper. I went munching on the raw veggies as I consumed my rice and spinach chicken. We then had tea included in our meal. My dish came out to 7€ and Marga's was half that, so we had an entire meal for about 10.50€. 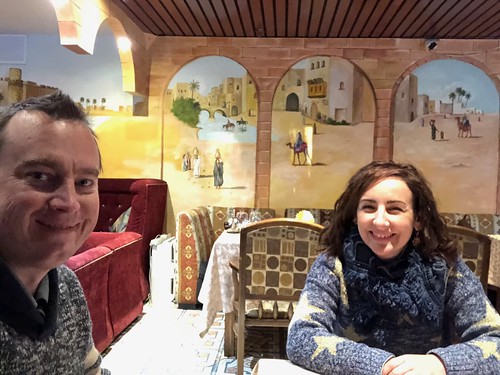 The decor felt like we were in Arabia somewhere. 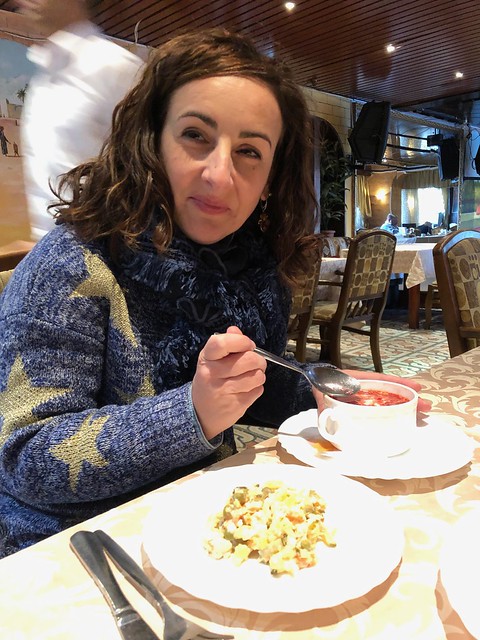 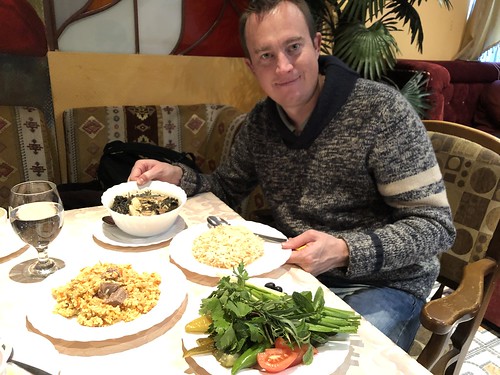 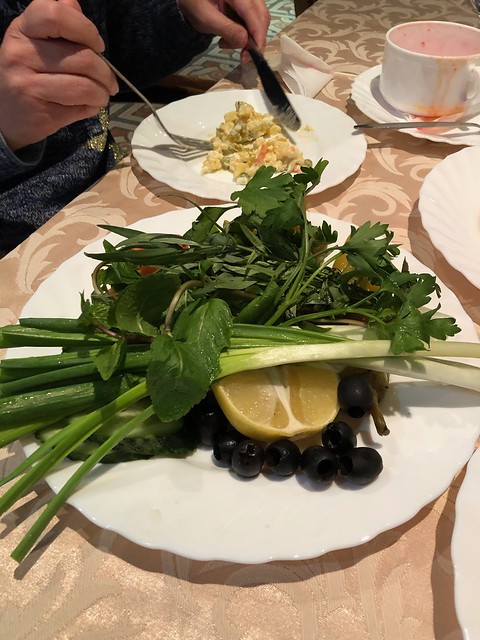 Here, have a pile of random stuff from the garden!

To entertain us during our meal, like the night before, we had a Russian romantic drama play out before our eyes. Two tables down, there was a blonde woman who was wheeled in in her wheelchair by a young strapping lad who we thought was her boyfriend. The lad went away and a few minutes later, an older gentleman, at least 15 years her senior, who reminded me a lot of a late alcoholic friend of mine. He plopped down a dozen white roses on the table, much to the gal's delight. A waiter later brought out one of those buckets to chill wine for the roses to sit awkwardly in. The man then pulled out a small box, which turned out to be chocolates of some kind. It was after the chocolates that he produced a flask and proceeded to pour what looked like cognac into their empty wine glasses. The woman giggled. He polished off his glass in one swig, before briefly flashing the fact that he had a whole wine bottle in his bag. The glasses were refilled once or twice. At that point the waiter came over, looking very disappointed and said something that must have been along the lines of, "Sir, you can't bring your own alcohol in here," which our table agreed would put an end to the contraband, but no, this man makes his own rules when it comes to wooing his women and liver; the cognac kept flowing, despite two other attempts of weak pleading from the waiter. 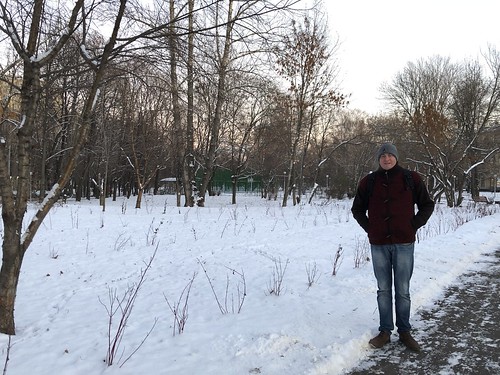 After exiting the restaurant, we walked several kilometers through the residential neighborhoods we were in, occasionally darting into supermarkets to ogle the foreign supermarket offerings and, more importantly, to warm up a bit. It was -10º C (14º F) outside. Once we decided it might be an unforgettable experience for Marga to get a manicure at a local neighborhood salon, but she said the prices were much higher than in Spain, so we excused ourselves back out into the cold. It was almost time to catch the subway to meet our guide for the Metro Tour. 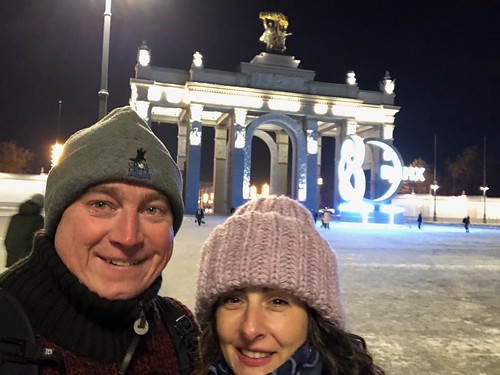 The Vystavka Dostizheniy Narodnogo Khozyaystva (Exhibition of Achievements of National Economy) park area looked like it would be pretty cool. A few Russians said that that's a place that the locals go to hang out. They were busy putting up Christmas decorations.

The metro tour was so fascinating that I'm going to separate it out into a separate post.

After we left our metro tour, we decided to go to the restaurant next to our hotel for dinner. When we walked inside, the incredibly friendly (sarcasm) woman said, "Group?", to which we said, "Table for two?" She said, "No!" and pointed to the door. We asked the man standing outside the door with four coats on, presumably to open the door for clients, where the nearest restaurant was, and he pointed in one direction (away from the hotel), but when we walked 50 meters in that direction, it became obvious that he had screwed us and that we would have to cross a 6 lane highway and a river to get to any businesses. Thanks, random Russian!

We looked in Google Maps and found a place that claimed to serve Armenian and Georgian food. Even with Google Maps, the place was really hard to find, having to wind our way through several labyrinth like passageways in the middle of a block. Despite being 400 meters from the Kremlin, there's no way your average tourist finds this place. When we approached the door, we saw that the place was empty, so, in a moment of doubt, we read some of the online reviews. They were all quite positive, so we decided to give it a shot. Marga ordered the "Meat Prepared Caucasian Style", which could be anything to us, and I ordered the "Boiled Goat With Herbs". Both were amazing. 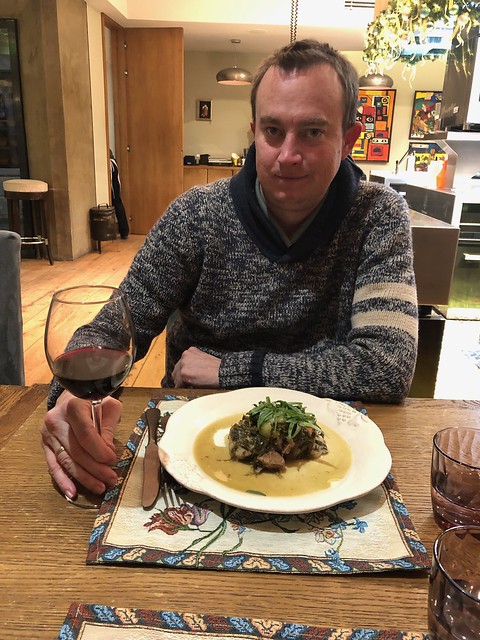 I got my goat. 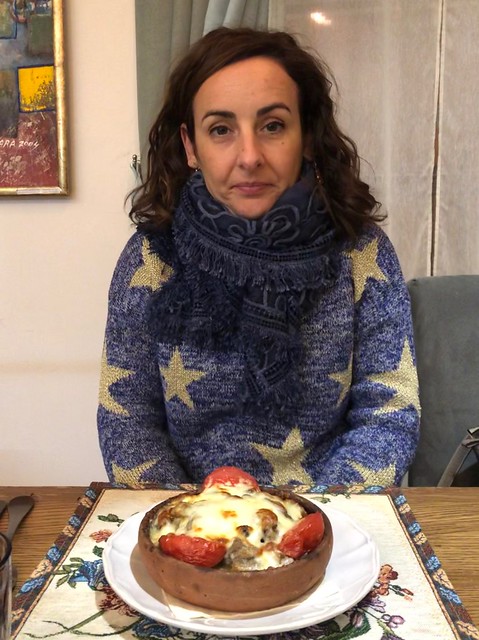 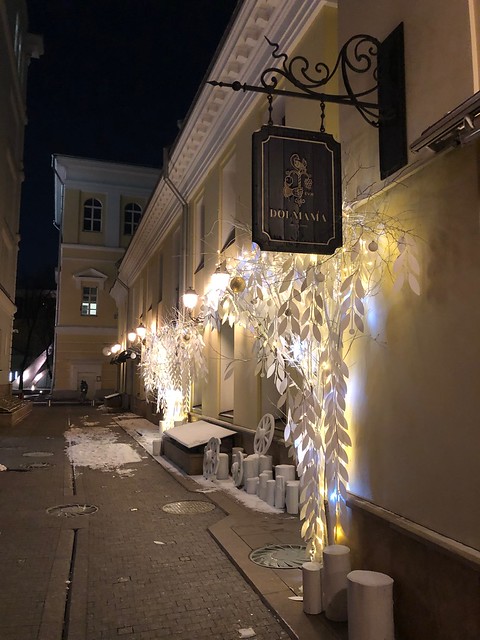 The place was called Dolmama. It was the restaurant we returned to for our final meal in Russia the following Saturday.

Then it was almost midnight and time to head to the hotel for a nice toasty night's sleep. They keep our hotel room at about 25º C (77º F).