We got to the Theatre District subway stop 45 minutes early and decided to stop for a drink and snack to tide us over until a late dinner. The Metro tour started at 7pm and was going to take two hours.

After my blini and honey beer and Marga's milkshake we headed to the meeting point, at the fountain in front of the famous Bolshoi Theatre. We are often nervous pre-booking guided tours because we have been stuck with such horrible tour guides in the past. This time, however, we got lucky. Our guide introduced himself as Johann, although his English had a slight Spanish accent to it (the tour booking also offered guides in Spanish). After we introduced ourselves, I asked him where he was from, and he said he was from Colombia, but that he had been living in Moscow for 12 years. There were three other people with us, a couple and a single retired gentleman, all from the Netherlands. The couple were a bland bunch, paying very little attention and cutting off the guide as he was pointing things out to us entering the Metro, "Um, I thought this tour was of the Metro?" Sheesh!

I could not tell you all of the stations we visited, or all of the details our guide shared with you, but some of them really stuck with me.

On the trains heading out of the city, the voice telling you the name of the next station is man; and when you are returning back towards the center of the city, the voice is a woman. This is meant to symbolize your boss pulling you out to work, and your mother/wife calling you back home. For the circle lines, that simply go around the city's center, the male voice is on the one going clockwise – the way you would turn a screw in – and it's a female voice going counterclockwise; make of that as you wish.

Also, until literally last year, none of the voices were in English, and none of the Metro maps had any Latin alphabet names (which makes it a lot easier to quickly comprehend), but when they were going to host the 2018 World Cup, they did a study and decided that it would save many headaches if they would make the Metro more comprehensible to the European and World masses.

Something about the Metro stations was a little "off" to me, but it wasn't until our guide pointed it out that I realized it. There is no advertising!!! Since I only ride Metros once a decade, this wasn't quite a salient to me, but I remember the London Underground well, and how it is plastered with posters from floor to ceiling. This is also a recent change that happened a year or two ago. The mayor banned advertising in the Metro and had all the ads all removed. I wonder what effect it had on the local economy. It certainly makes the Metro a much nicer place to be. 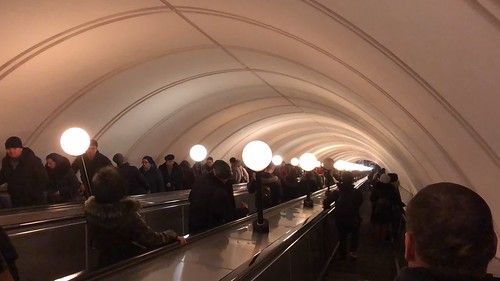 Look at those gloriously blank walls!

All of the stations that are under some structure, like a building or a square, have two exits, one on either side of a long hallway. The stations that are not under something only have one exit and end at the far end.....in a shrine. The stations are like cathedrals in which to worship...The State. This sounds a little bonkers, but once you know this, you see it in every station. 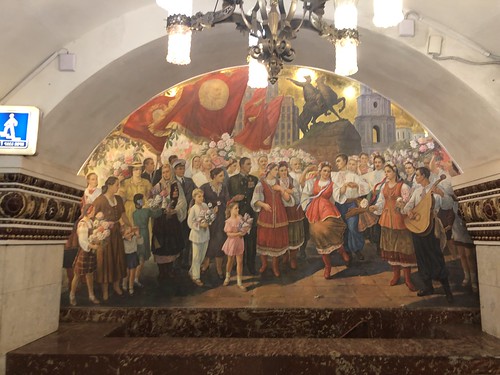 A shrine end, glory to the comrades. 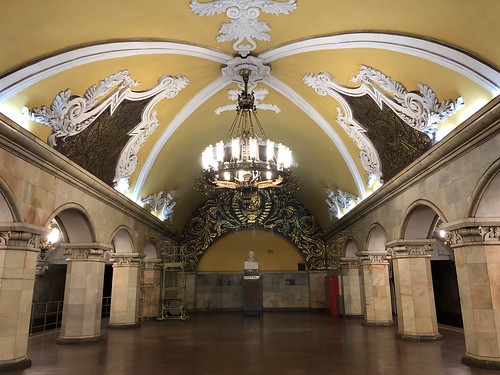 Shrine to Lenin. The statue was actually made from his death mask. 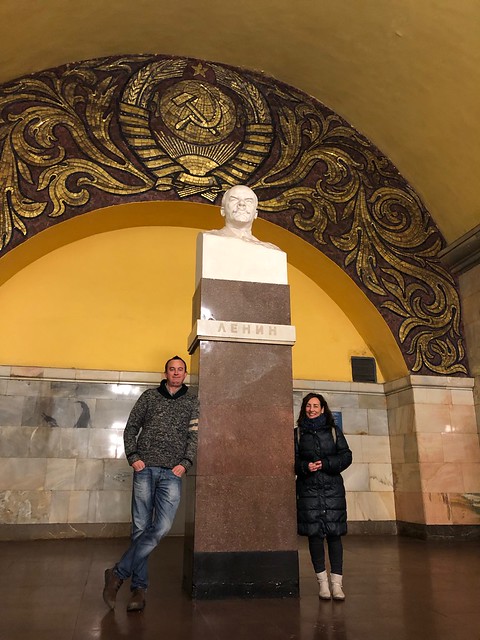 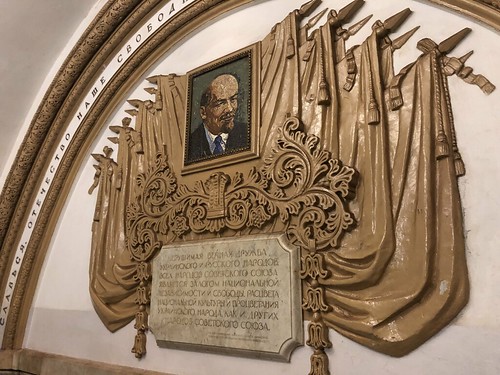 Lenin's all over the place.

Many of the stations are dedicated to Russia's relations with neighboring nations, like Ukraine and Belarus, with many paintings and mosaics telling stories of heroic acts and symbols of products and trades that those nations excel at. Other stations honored the heroes in Russian history, both people and cities, like those that fought foes from Napoleon to Hitler. 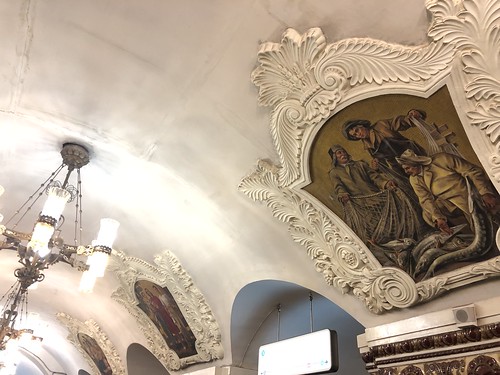 Our guide taught us many other things about how the stations were made, how the city grew, and how the Metro stations were build to accommodate such growth. It was not easy building Metro stations in Moscow. One station was estimated to take 4 years to build in Stalin's master plan, but when the constructor got on site, the ground was harsher than expected, and he had to go back to Stalin and say that it was going to take 6 years. Stalin looked him in the eye and said, "It's going to take four years!" Dude was so terrified, it was built in only 3 years. 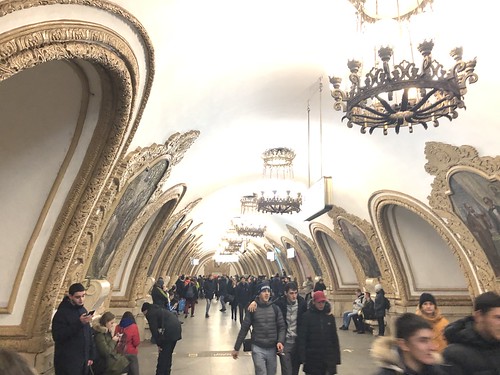 We started the tour learning that Russian does not have a word for "security"; the Russians only refer to a "lack of danger". Russian life is about minimizing danger. That's why every corner of every station is covered by a security camera, and how there are many, many fire extinguishers around. But most importantly, the stations are, and have served as, bunkers. The tunnels between the stations have huge one-meter thick doors that can slam down to protect those inside from attackers or nuclear radiation. Each station has food rations to last 3 months. They are some of the safest places in the world to be during global thermal nuclear war, despite being right underneath ground zero. 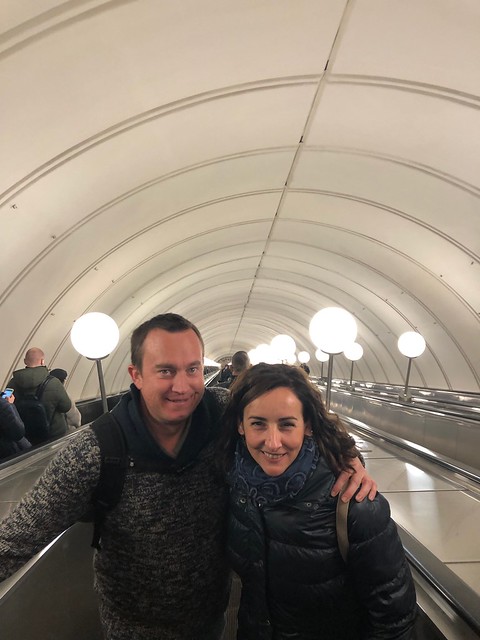 We rode on the longest escalator in the world, up from the deepest subway station in the world. There is some controversy over that title with Kiev and St. Petersburg. Our guide said that if you measure by the depth of the rails, Moscow wins. 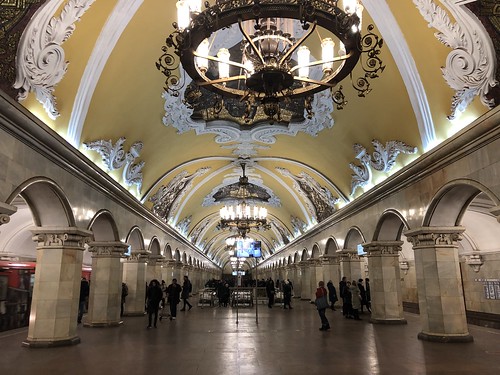 Each station was more impressive than the last. 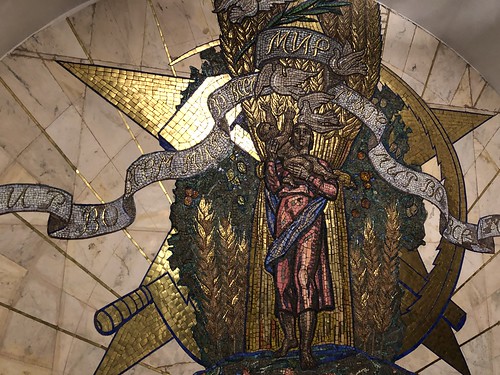 Actual gold plating on the ceiling. 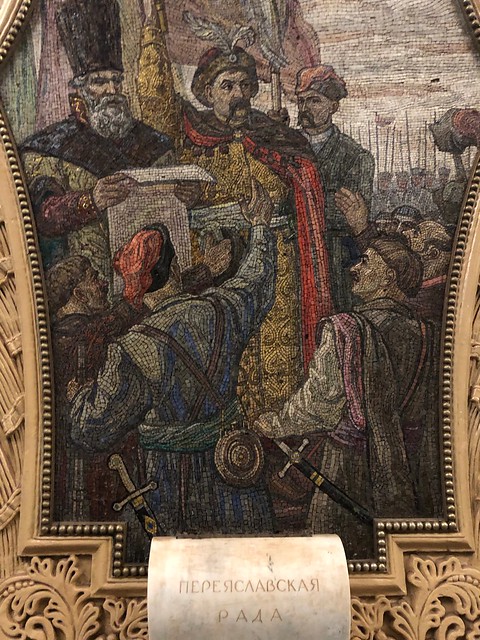 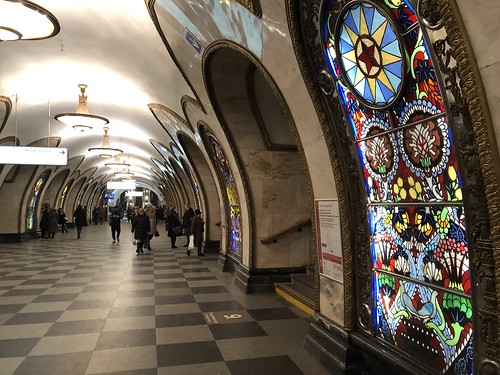 In case there was any doubt that these are churches...

Johann also explained to us why the Russians do not smile, a fact I had both read about and noticed first hand. He explained that during Stalin's USSR, there were two different types of currency, the Ruble and Beryozka checks. The only way to get Beryozka checks was in currency exchanges when exchanging other currencies. So if you were a successful businessman, traveling to other countries to sell your wares, when you got back to Russia, you could choose to change some of your foreign currency into Beryozka checks. And there were many luxury shops that would only accept Beryozka checks, thus creating a class system.

But the real reason people don't smile is that back then, if you were nice and invited someone, say your best employee, over to your house, if that person later went to the authorities and, without accusing you of anything, said, "I went over to Mr. Jones' house last night and he seems to have a lot of nice things...I wonder what he's up to?" This was often enough to have the government come and put Mr. Jones into prison for the 6-8 years while his finances were investigated. In the meantime, what happens to Mr. Jones' house? Well, it's not really his house, because Soviet Russia doesn't believe in personal possessions; it's the people's house. So who should have it? Well, probably this outstanding citizen that ratted him out to the authorities!

It doesn't take much thought experimentation to conclude why Russians are not even remotely socially proactive in forming relationships. Also, he said, that if you were grinning a little too much looking into your love interest's eyes, or crying a little too much after your love interest not returning the interest, someone might report you as having something wrong with you, and off to jail you go! So Russians are extremely poker faced in public. This jail-on-suspicion policy lasted up until 1991, so only the very youngest Russians are willing to turn up the corners of their mouths when they look at you. In fact, we later witnessed some old women that would cover their mouths with their hands when speaking to their companion on the train. 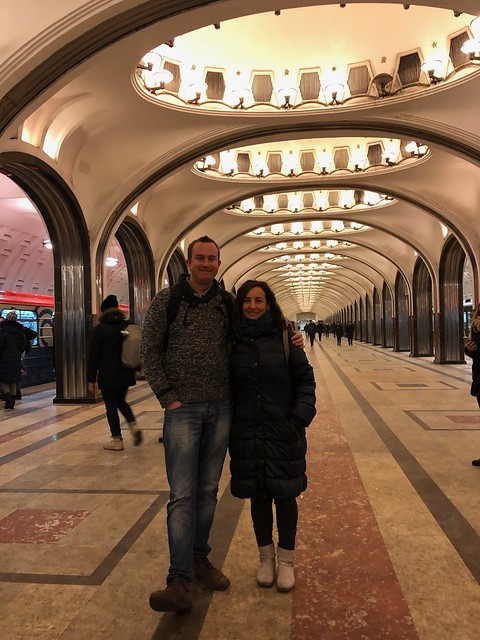 When you outlaw religion...

Probably my favorite part of the entire Metro tour was all in one station full of bronze statues on every column. Atheists like myself often imagine that the world would be a better place without religion. Whenever we reference all the violence and bloodshed throughout human history in the name of religion, the religious apologists love to throw Stalin at us as a "but what about!" argument – arguing via exceptions to the rule is an inherently weak argument, but that's neither here nor there. Our tour guide explained that, when Stalin outlawed religion, the Russian people had to find an outlet for their superstition. This one Metro station became such an outlet.

There were certain places on many of the bronze statues that were thought to have effects on your life if you touched them: the dog's nose for happiness (d'aww!!), a pistol for winning a symbolic "duel" against some foe of daily life (i.e. a boss that won't give you a raise or a friend that won't return a loaned book), the beak of a rooster to specifically request bad luck in order to achieve a goal (i.e. a flat tire to get out of going to a party you don't want to go to), the head of another rooster for money to arrive in your life, the statue of a man holding a child if your son wasn't making you enough grandkids, and a woman with child for the opposite scenario, including the penis of the child the mother was holding if you really wanted to son or grandson rather than a daughter or granddaughter. He told us all of these things, and we could clearly see that the specific parts of the statues he mentioned were extremely shiny compared to the dull aged bronze of the rest of the statues.

I found this fascinating, but wondered how often it really happened. Then, right before our very eyes, a train full of passengers arrived, and I swear to you, every fourth or fifth person touched the dog's nose as they walked by. Some people would walk from the other side of the platform just to touch a statue. It was amazing to me just how engrained in the culture this tradition still is, all these years later. It made me consider what a world "without religion" would look like, or if it could ever exist. 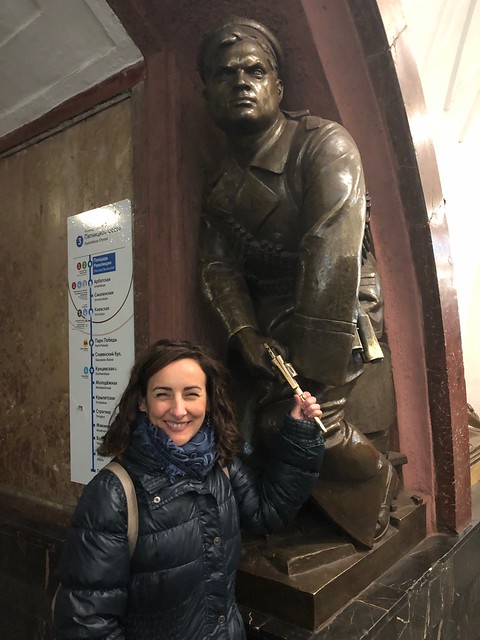 Don't dual with my wife! 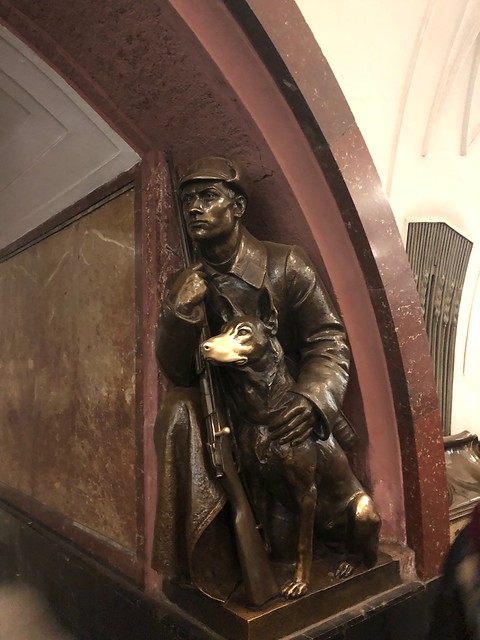 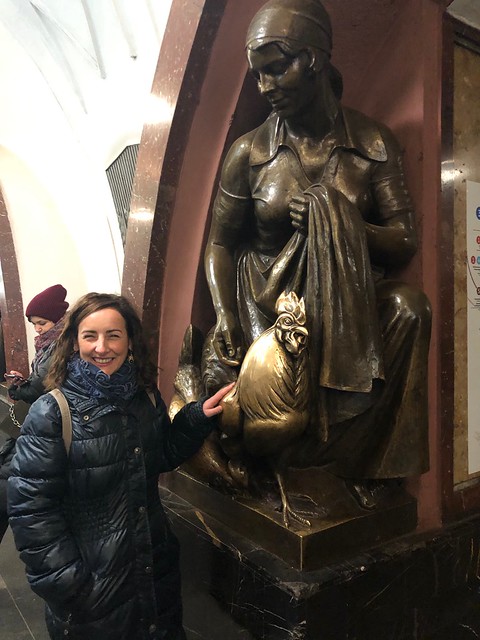 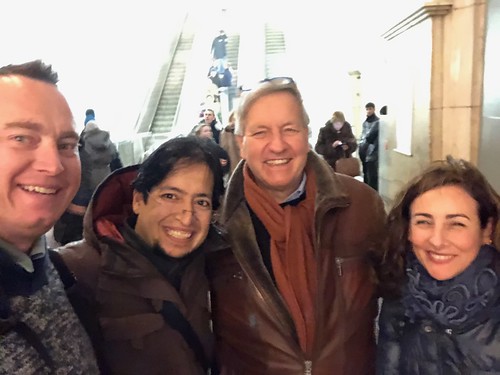 Johann, and the other nice Dutch guy that went on our tour.

We were so pleased during the entire two hours by our luck in tour guide, both his depth of knowledge and charming charisma. At the end, I asked him how he ended up in Russia, and he said that he'd met a Russian girl, causing me to nod knowingly. I asked him where they'd met, and he said that he had met her when attending university in Moscow. In the admissions interview, they asked him if he was going to learn Russian, and he gave an enthusiastic YES! and they let him in. I asked what he studied, and then he admitted that he was a practicing medical pathologist, working in a lab and also a lecturing professor, and that he also teaches children Spanish on the side. Wow!! No wonder he struck us as so intelligent! Amazing job, Johann! Gracias, thank you, and Спасибо!