The breakfast buffet at our hotel left much to be desired, but over the course of the week we learned what we liked. For the morning of our second day, we decided to tour the Kremlin itself. At the tourism office, the people selling tickets to get into the Kremlin, and the audioguide gadgets that you wear around your neck, were astonishingly unhelpful. Almost no one spoke English. The sign said that the Kremlin Cathedrals (there are a bunch of churches inside the Kremlin's walls) tour with audioguide was 250 RUB. When we requested tickets from the lady behind the glass, she said, 1000 RUB! We said, "No, the 250 RUB one," but she assured us that the price was 500 RUB each. No matter how much "But it says right there!" arguing could assuage her, and eventually she told us to go talk to some other people at the "Help Desk". They spoke slightly more English and told us that it was 500 RUB each, plus another 200 RUB for the audio guide. Rather than continue to argue over quantities under $5, we went back to the super unhelpful ticket lady and forked over 1400 RUB for the entry and two audioguides. 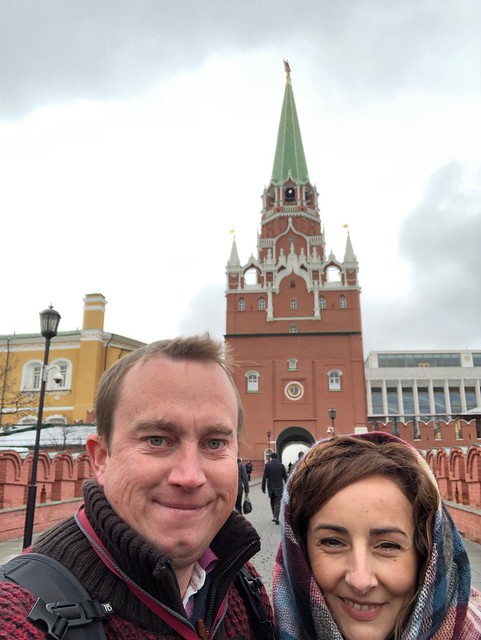 After going through some pretty exhaustive security, we were finally entering the Kremlin! 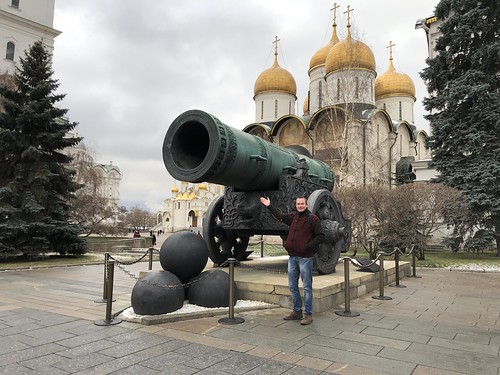 The Tsar Cannon is literally the largest cannon* in the world, created in 1586. It's mainly decorative as a Russian phallus. 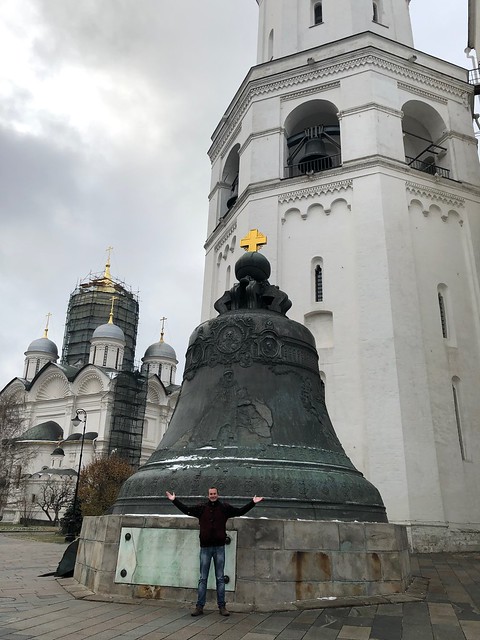 The other impressive feat of bronze casting is the Tsar Bell, which is 6.6 meters (22 feet) in diameter. It has never been rung. #facepalm It was really interesting for us, because just the week before, we had learned a ton about bell casting. 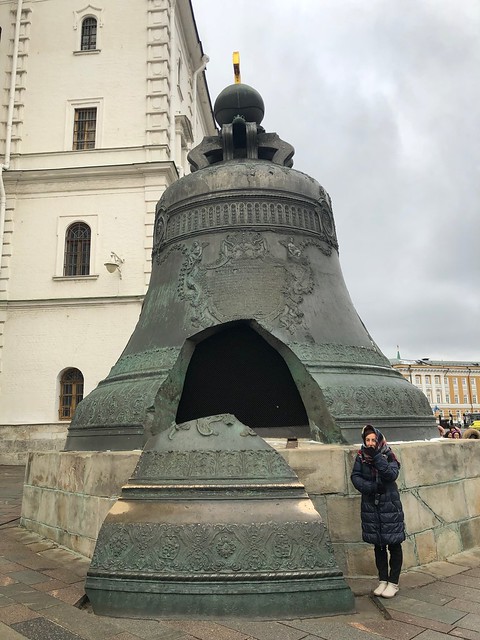 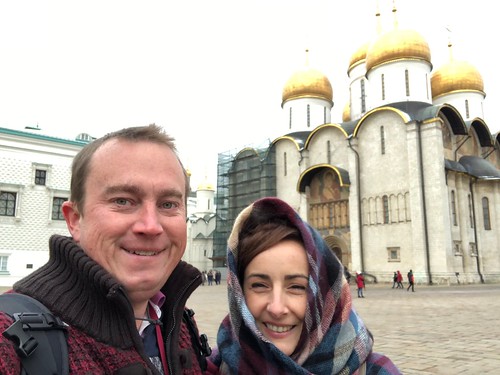 The Russian churches were very impressive, and not at all like the cross-shaped Catholic Cathedrals across the rest of Europe. Almost every single surface of the walls were painted ornately with scenes from scripture. The audioguide was very hard to follow because it would say things like, "Okay, now face the southern wall of the church," and I think some of the things have moved around since it was recorded. We were puzzled as to just what a church service would be like, as there were no pews and not much in the way of an altar from which an elder could speak to the gathered masses. 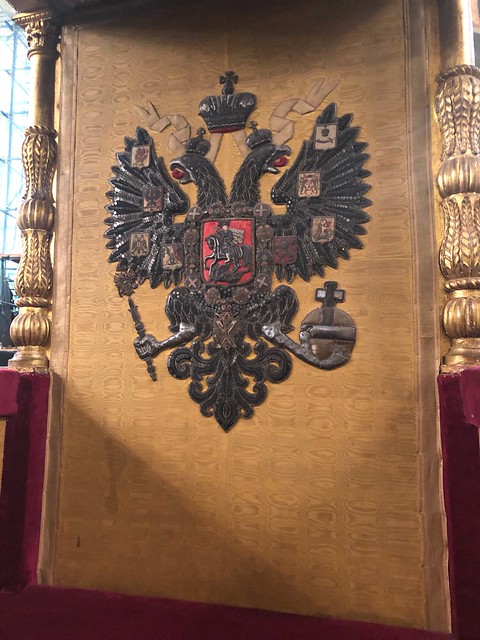 This was one of the only photos I took inside the churches, of an ornate tapestry. The double headed eagle is a common symbol around Russia. 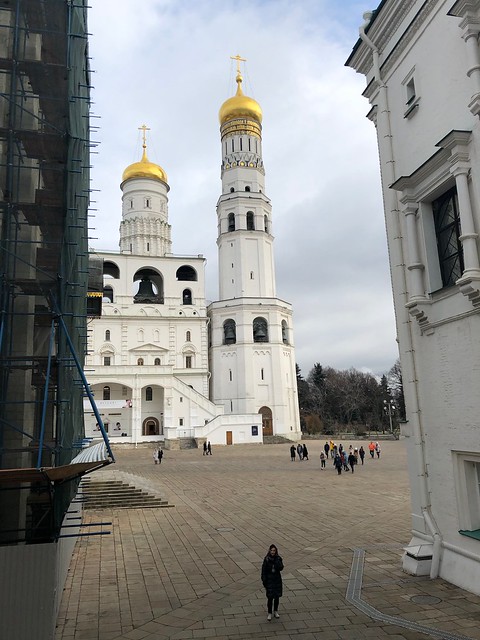 One tour guide told us that the words for "Christ" and "gold" are very similar in Russian, and somehow the metal got conflated with being holy, as such, many of the churches' onion-shaped domes are actually plated with real gold.

We ended up not finishing the audio tour, as there's only so much history about Tsars commissioning artwork that one can stand. We wandered the Kremlin grounds as much as we felt comfortable doing. 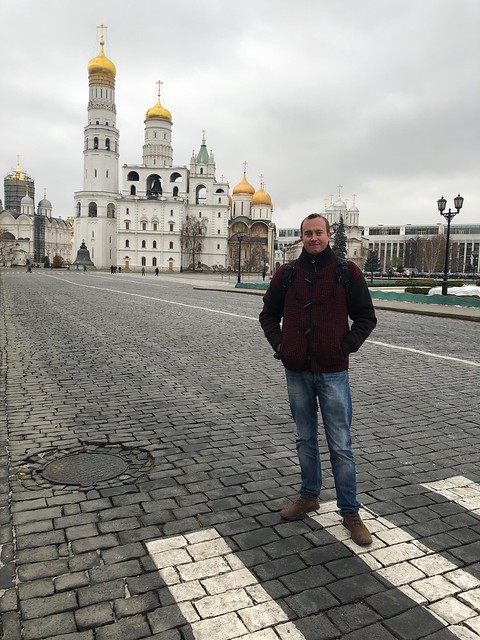 There was a cop with a long stick that was very adamant that we stay on this crosswalk. 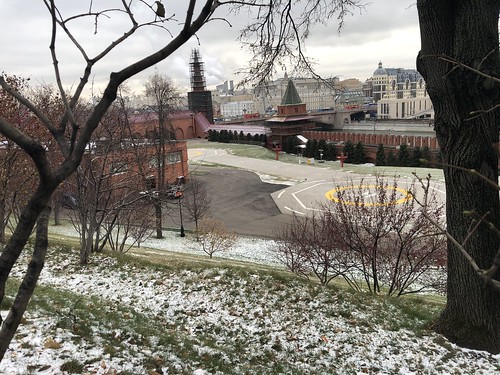 We found the official Kremlin helipad. 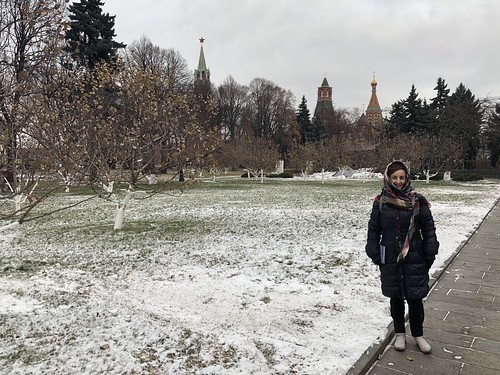 There was a beautiful little park. 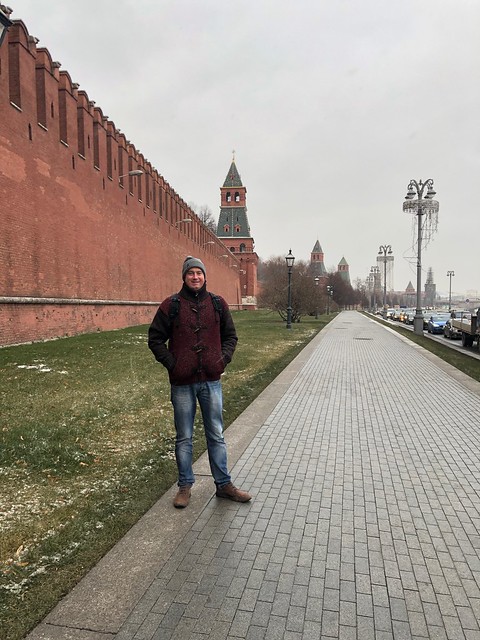 Back outside the Kremlin walls, it was time to start looking for some lunch. We remembered a nice looking place inside Zaryadye Park the day before, so we walked there. 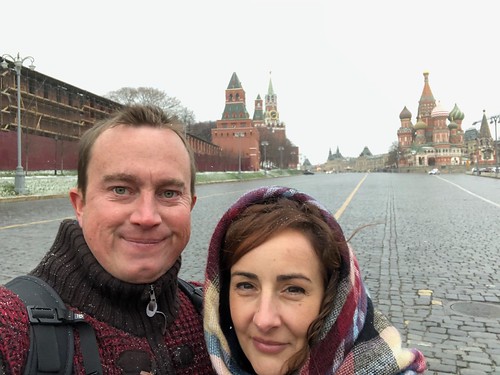 One more Red Square selfie... The place is just so photogenic! 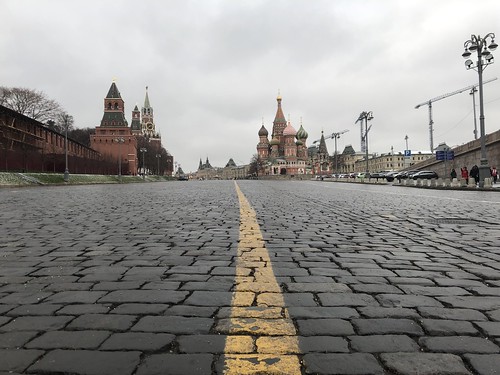 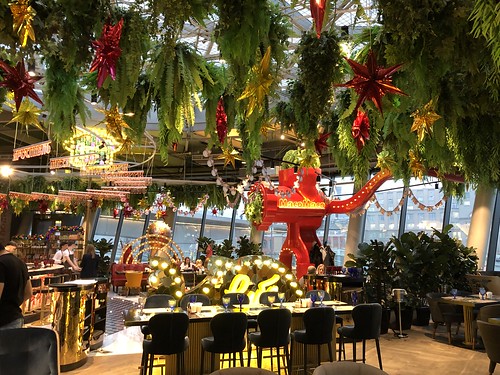 The Zaryadye Gastronomic Сenter was pretty impressive. I had a salad with lamb tongue. 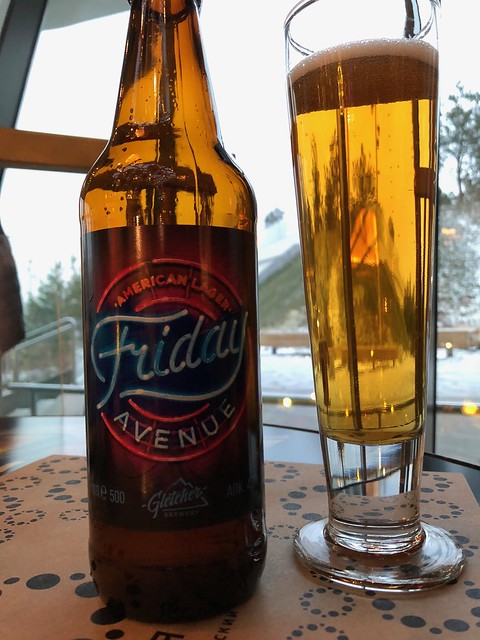 This beer name cracked me up. It's amusing to see the results of non-Americans brainstorming the most American thing they can come up with. 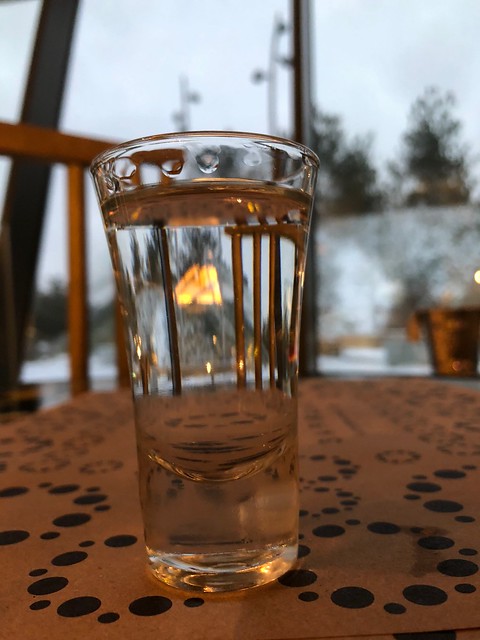 After lunch, I ordered a Polugar, a "breadwine". To quote a website about it: "In terms of its taste, Polugar is unlike any alcoholic drink available today. Everyone who has tried it raves about its natural bread taste and aroma and is unable to compare it with any other known alcoholic drink. Polugar is not like modern vodka. It is something different, a more ancient type of alcohol, which has stayed true to its ancestors." My hot take on polugar is that I'm glad I tried it and don't really need to try it again; it was similar to vodka or moonshine.

By the time we left the Gastronomic Center, it was snowing...hard. So we went back out onto the bridge over the river. 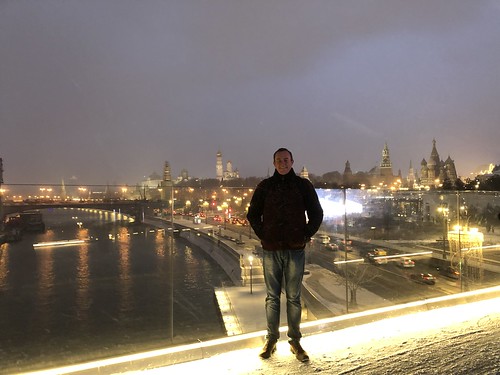 It was pretty slippery. 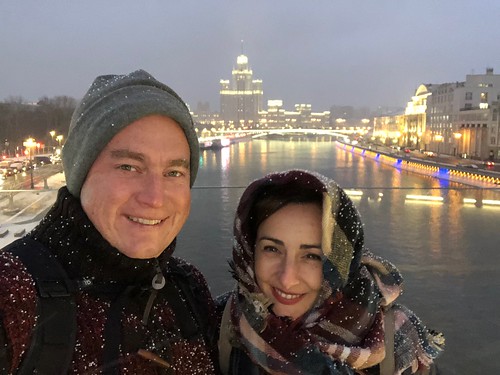 One salient feature of the Moscow skyline is the Seven Sisters, seven similar buildings commissioned by Stalin to celebrate the Russian victory in World War 2. That's one of them behind us. 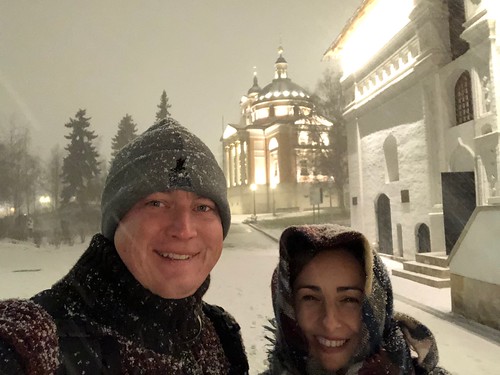 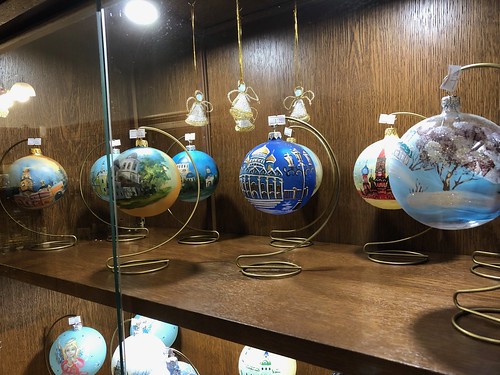 We ducked into a shop to get warm. It was full of Russian souvenirs. Were we the kind of people that collect such paraphernalia, I definitely would have bought one of these Christmas ornaments. 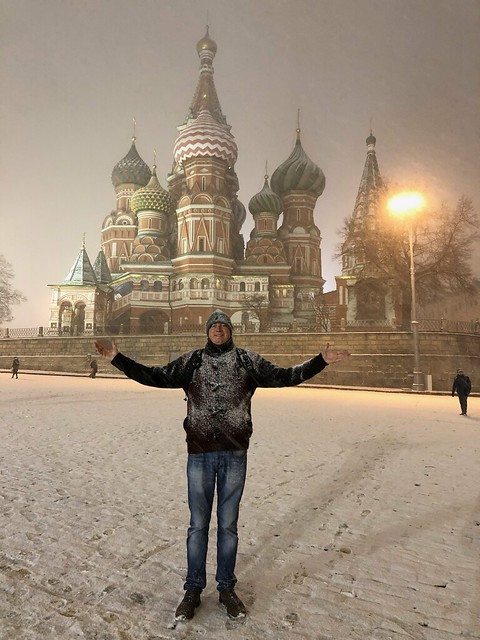 Now this is the Moscow I expected! 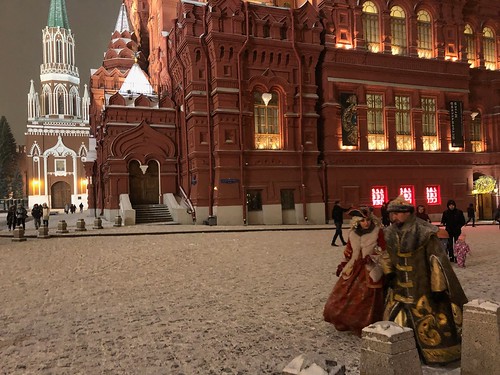 So I saw these people walking by and took this photo. They saw me and asked if we'd like to have our photo taken with them. We said, "Sure!" 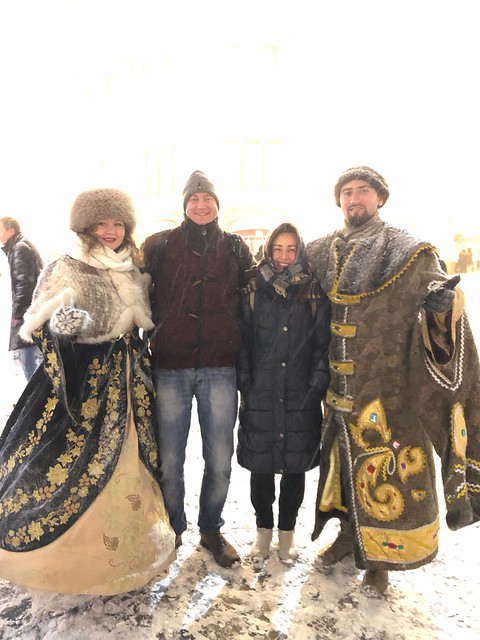 Looking good. That's the lights of the GUM blowing out the background. 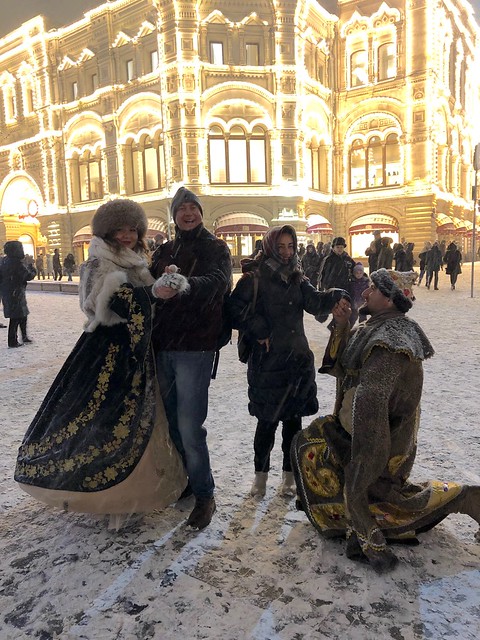 They suggested we pose this way.

After I got my camera back, they said, "Okay, that'll be 4,000 rubles ($59 USD), please." If they had asked for five bucks I probably would've said sure, but the fact that they asked for so much was positively offensive, and we refused. They called us some names in Russian as we walked away. Screw you guys.

Next on our list of things to see was the Russian State Library, or Lenin's Library. We noticed that everyone was scanning a membership card to get in, so we asked if we could get a visitor's pass. The woman gestured with her arm to direct us to another door, so we went back outside and into the next door. The man there gestured us towards yet another door. The guard behind that door told us to go back to the first door. Just when we were about to give up on the whole endeavor, I spotted the word "visitors" on door in the first lobby, and we were granted passes. 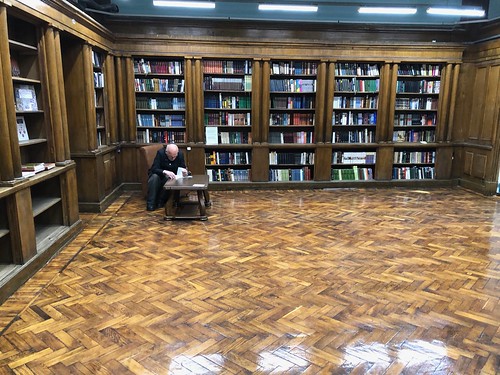 To be honest, it was "just a library". I'd recommend skipping it if you are reading this for tourism tips.

It is nice to see so many books and also so many people all being quiet together.

After leaving the library, it was time to look for a place to have dinner. The word "рестора́н" is an important one to learn if you're visiting Russia. If you translate the letters to the Latin alphabet, you get "restoran", which I'm sure you can figure out.

This night we chose the worst restaurant of our entire trip, a place that was trying to be extremely hip and cool, but failing. It was very dark, and we could only see by the flickering candle on our table. Marga ordered the lamb-burger, and I can't even recall what I had. The most interesting part of the evening was the drama that played out right outside the window we were sitting next to.

A couple pulled up in a black Bentley New Continental GT, which starts at $200,000. The woman got out and came into the restaurant and sat near us. The man stayed in the car for a while, on the phone. He then came in, but left shortly there after and walked down the street and sat in the passenger seat of another expensive car for a few minutes. He then got out and came back into the restaurant. Another woman joined them. He then left again to go sit alone in his Bentley. Then another man came up and got into the passenger seat for a few minutes. He returned to the restaurant. Shortly after that, the first woman sort of left in a huff and got into the driver's side of the Bentley. The other woman went out and sat with her in the passenger side for a while. Then the man went out and tried to talk to her, but she refused, making his stand out in the cold for about ten minutes. Eventually everything worked out and they all came back into the restaurant. They are clearly Russian mafia drug lords.

Straight back to the hotel and to bed. The next day we were going to Space!