What better time to visit Moscow than late November? My wife and I left the kids at home with her parents and set off to explore the city of Tzars. To prepare, I read plenty of listicles about "7 things you should know before visiting Russia for the first time", and about a week before our trip, I started a Russian course on the Duolingo app. I'd never been to a place with a whole different alphabet before, so it was a little daunting to feel so illiterate. An American friend in Spain who studies Russian as a hobby gave me some pointers on deciphering the Cyrillic alphabet. All that higher level math I took in college that was never really useful for anything actually came in handy in my ability to recognize some of the Greek letters that Cyrillic has appropriated. We booked a fairly cheap hotel that was literally 500 meters from the Kremlin. On our first day in Russia, we decided to just walk around and get to know the place. This is our favorite form of tourism. It really was too freaking cool to be in The Actual Red Square with the iconic Actual St. Basil's Cathedral. We were in the square that so many tanks have crossed and in which so much history has taken place. 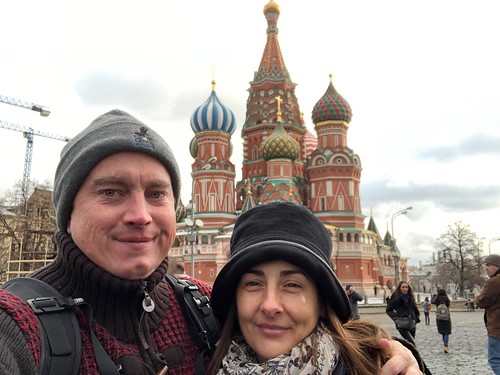 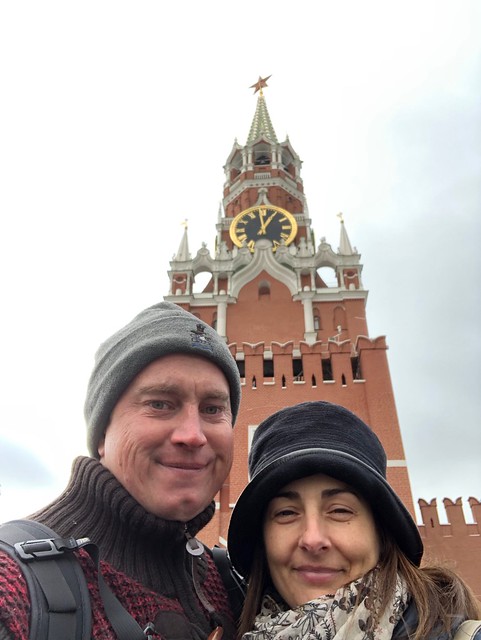 The clock tower of the Kremlin. The clock has a diameter of over 6 meters (20 feet). 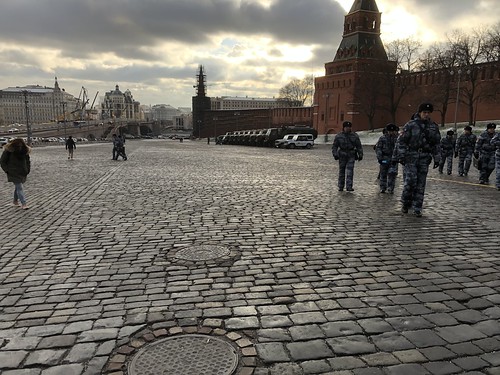 Several times during our trip we saw some manner of soldiers or cops marching about in formation, and many official looking armored vehicles. 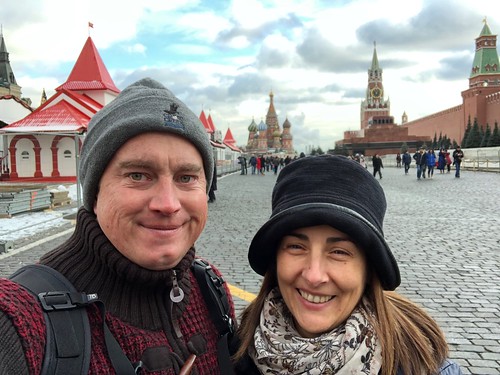 Red Square. The whole week we were there, they were installing an ice skating rink and Christmas village in the middle of Red Square. It finally opened just before we left.

From the Red Square, we went to Zaryadye Park, a brand new park that opened just last year, designed to celebrate Russian's different climactic zones: Tundra, Forest, Steppe, and Floodplains. Remember learning those in 4th grade, along with the word "isthmus"? Different parts of the park have plants from the different climates.

The park also includes a literal "bridge to nowhere" that takes you out over the Moscow River. 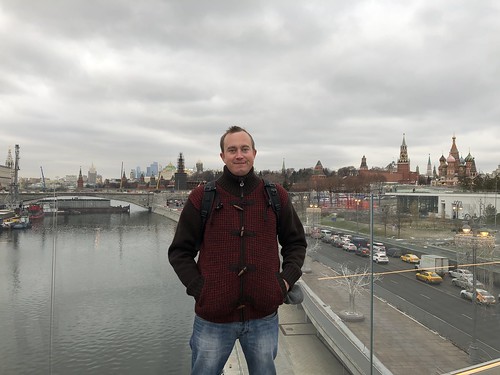 Hovering over the river, with the Kremlin and St. Basil's behind me. I doffed my hat for many of the photos, but it was never off for more than 20 seconds, as it was way too cold to have an uncovered noggin. 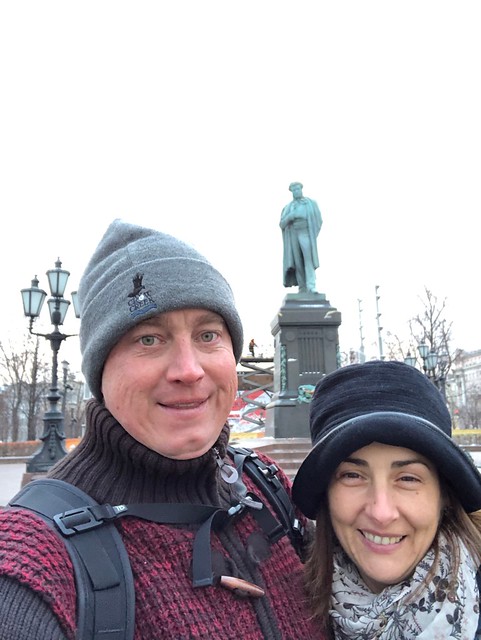 Pushkin Square, with a statue of the famous Russian poet. 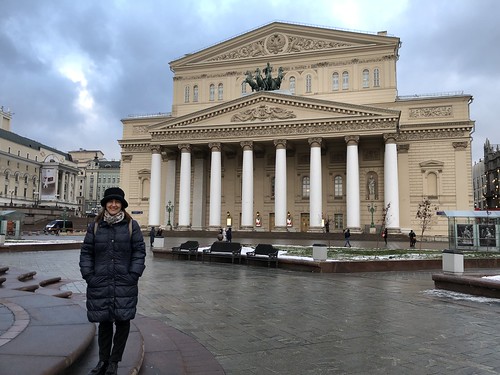 After tiring a bit of the tourist traffic, we took a turn away from the center, and ended up in an area where local business-folk were on their lunch break. We discovered very charming restaurant called Vysota 5642. We noticed that a lot of restaurants boasted about where the food they were serving came from originally; there was a lot of Georgian food. 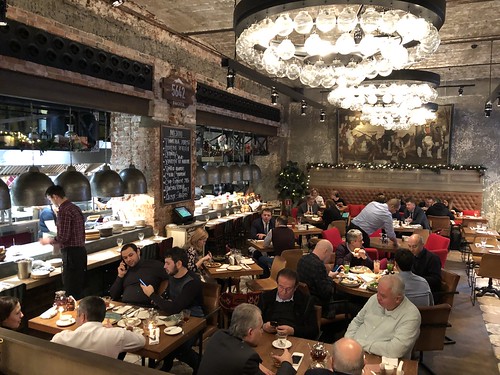 It was a hip and happening place. The word Vysota, or Высота, means "height" or "altitude". The name refers to the height of Mt. Elbrus, the tallest mountain in Europe, in the Caucasus Mountains. 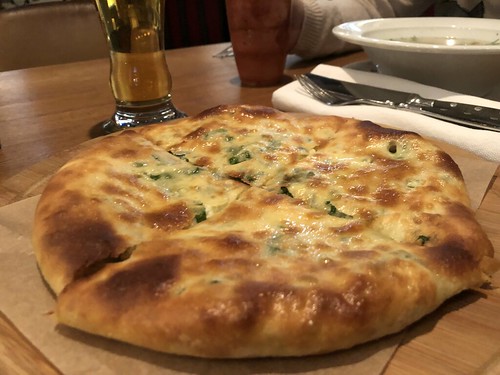 Khachapuri Stuffed with Spinach is a cheesy hybrid of quiche and pizza from Georgia. It was just as delicious as it looks. 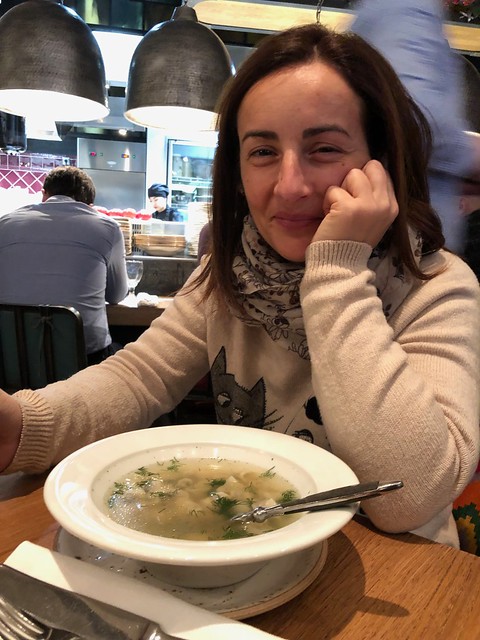 To quote a website I found when trying to decipher the menu: “Dushbara is a favorite and popular Azerbaijani dish that is meat filled dumplings cooked in a lamb broth. According to tradition every Azerbaijani woman not only needs to know to make this dish, she also must be able to make the dushbara as small as possible, to fit ten of them in a tablespoon.” The Russians really love their dumplings!

After lunch, we continued walking around some non-touristy areas before seeking shelter in The GUM (pronounced "goom"), or ГУМ, a huge shopping mall right on Red Square. It contains every luxury brand of clothes or perfume you can name. It was fully decked out for Christmas, with each brand decorating individual Christmas trees that lined the halls. 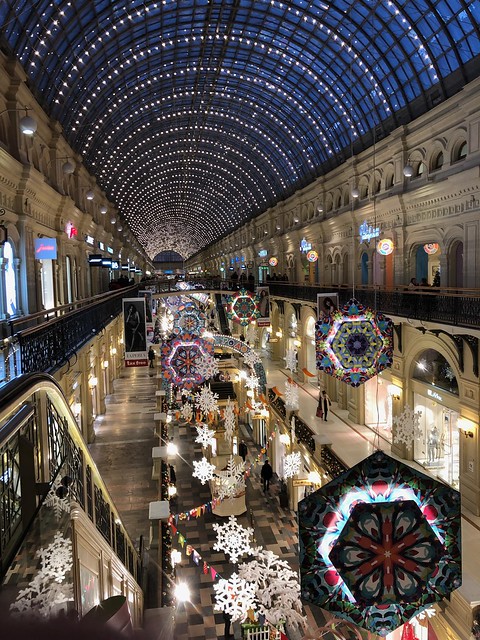 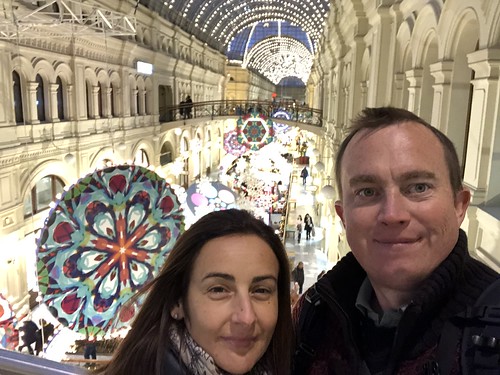 So nice to get warm!

The coolest place in the GUM is the "grocery" store, full of astounding luxury products. I was often reminded of Harrod's. 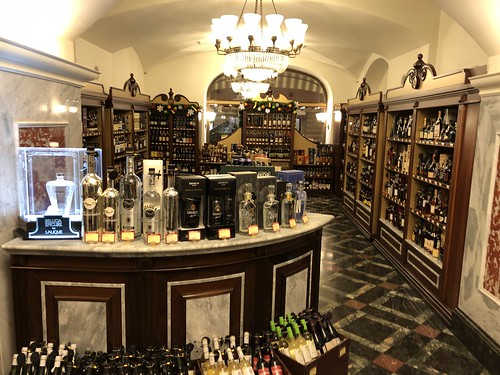 So many delicious liquids! 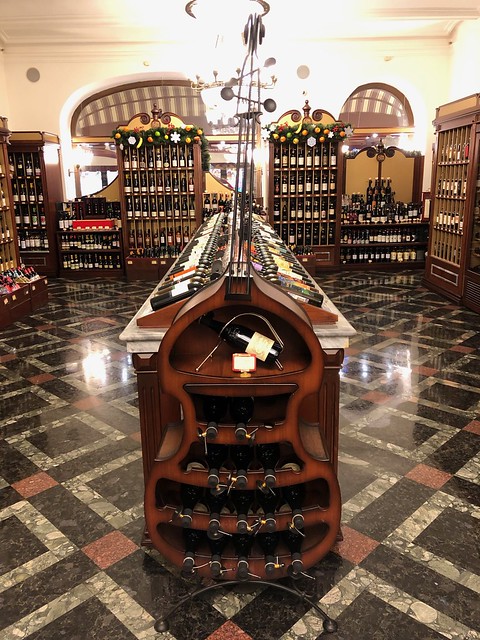 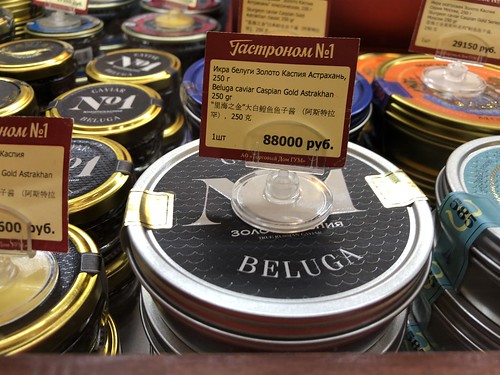 Something about these "Garry Potter" books made me smile and take a photo.

At the end of the day, we were exhausted. But our journey had only just begun...