State of the Offspring Address - October 2017

Don't get your hopes up, long-time readers. I don't think I'm going to find the time to write these monthly posts again, but I had some recent parenting and offspring anecdotes that I wanted to record for posterity.

They are eight and four now.

Since receiving an Amazon Dot – smuggled into the country, as they are not for sale on Amazon.es – for my birthday, I have found the "Oldies" radio station to be the least offensive background music to play while playing or eating with my kids. Plus, it respects my age and never plays anything from after I was born. Post-Beatles Lennon is about as modern as it gets. The other day, the song Under the Boardwalk came on, and Nora asked me what the titular refrain meant. I explained that, by the beach, we use planked surfaces to let water drain, and sometimes people like to go into the hidden space underneath it with their special someone. She nodded, and said, "Do you know who I love most in the whole world?" Well aware of my position under Mommy in her totem, and weary of any potential third grade romantic sprouts, I shrugged. Then she surprised me with "ME!!!" Well done, Nora. You are the most important person to you, and never forget it! 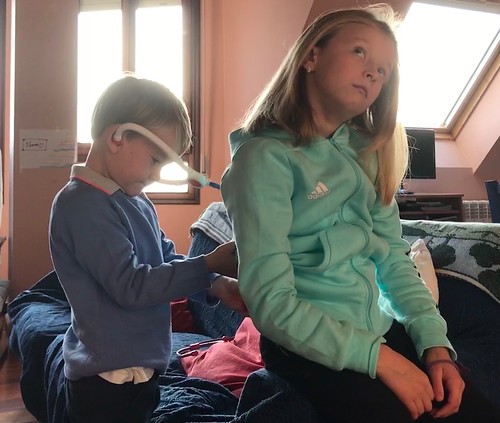 You know you're getting old when your doctor is younger than you.

Due to screwy new education legislation in Cantabria, the kids are off school this week, which means that they wake up even earlier than the time I cannot drag them out of bed on a school day. Full of willpower after a ten-hour sleep, I decided that I was going to try to make it through the whole rainy day without turning on the television. The kids went through the Kübler-Ross stages of grief in the morning as I devised homework for them. I typed up six sentences in Spanish and assigned Nora to translate them into English and write them down. Her current weakest academic link is English spelling. Meanwhile, Ian and I sat down to sound out all the words and read them. It was a surprisingly successful exercise.

Later in the morning, Nora had to go to Taekwondo class, and Ian was fully into no-tv acceptance. He politely requested a piece of scrap paper, emphasizing that it should not be a document of any importance. We have a stash of these that his mother brings home from work. He then requested that I draw a star on the paper and give him some scissors to cut out the star. When I checked back on him a few minutes later, I was impressed by, and complimented him on, his algorithm of cutting the whole star out into more or less a circle, with each point on an edge, leaving only triangles to cut out of the circle to achieve the final star shape. He eventually made about three stars, not really with any end goal in mind, but mainly to enjoy the cutting journey. I helped him cut the last one a little closer to the lines.

He then moved on to another activity, and I asked him to please pick up all the scraps of paper and take them to the trash. He agreed. When I checked on him again (I was preparing lunch in the kitchen), I noticed a final scrap of paper and asked him to pick that one up as well. He said, "No, that's the one YOU cut. YOU pick it up." I said, please, could he do it as a favor to me. He refused, stating that it wasn't fair that he have to pick it up.

I elected to use my favorite parenting motivational strategy of simply refusing any of his requests until he complied with mine. Kids are so needy; it doesn't take long for them to ask for something. Sure enough, he wanted help getting out some other toy, and told him I'd be happy to help him once he'd picked up the paper. It didn't take long for things to spiral into a full blown door-slamming tantrum about how unjust this cruel existence is, including one adorable threat to go live forever at his friend's house.

When things calmed down, I sat down with him and we discussed his feelings and my feelings. The lesson to be learned came down to two major takeaways:

I haven't thought that last one through, as I was making it up as I went along, so don't hold me to it. He listened to it all, and nodded and sniffled and seemed to understand. Then I made a joke about bottoms and we both cracked up.

He took the paper to the trash.

Nora continues to be positively saintly in her level of patience with her brother.

This past weekend we went for a family walk up a local hill. Ian had a little pack of candy that he was eating for most of the walk. On our way back down the hill he made a rather grand gesture of throwing the wrapper into the air and onto the ground. Both parents, in unison but in different languages, told him to pick it up and we'd find a trash can to put it in. He grumbled but complied. I held his hand, and he had the wrapper in the other, as we continued down the hill. About a hundred meters later we came upon a dumpster. In Spain, the dumpsters have a little pedal you can step on that opens the lid so you can throw in your trash bag. Ian's not heavy enough to accomplish this, so I stepped on the pedal for him. He reached up and threw in the wrapper, right in front of my eyes. Except...

There was no wrapper.

I said, "You didn't throw anything in." It took about a second for all of us to understand what had happened, and then another second for Ian to realize he'd been caught. He crumbled into anger and shame. I'm hoping it was mostly the latter. We marched, sobbing, back up the hill about 80 meters to where he'd discarded it, and back to the dumpster to throw it away.

They say it's a sign of intelligence when your kids try to deceive you. What impressed me most was his understanding of the lie. The reason lying is harder than telling the truth is that you have to maintain separate knowledge of what is actually true, versus the mental model of the truth in the mind of the person being deceived. He knew full well that we thought he still had the wrapper in his hand, so he had to go through the pantomime gesture of throwing it into the dumpster. 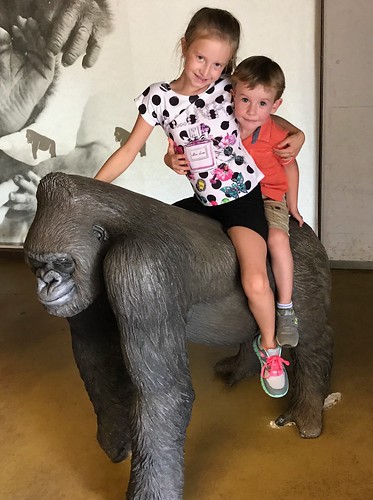 No one told her to reach around and hug him for the photo.

The other day, Ian was asking me to please play Crossy Road in two-player mode on the Apple TV. For that we needed another iOS device. I went for the kids' (really Nora's) iPad, but it was at 0% battery. Ian said, "And your phone doesn't have Crossy Road..." I chose not to correct his mistaken assumption so as to avoid it getting placed on the list of potential devices in the future. In the kitchen, adjacent to the charging station but not plugged in, we saw Nora's iPhone (an old sim-less iPhone 5) and I went to pick it up. Ian stopped me.

"Daddy, you can't use Nora's iPhone without asking her."

Wow! I mean, that's still not technically true for reasons of "Because I'm the Daddy", but very soon, once she matures into having actual private social interactions with her device, I will respect her property and privacy. But I'm still very impressed that he both understands the social norm and is willing to enforce it in others. Bravo, my son!

We did ask for permission, which she granted, but it was also at 0% battery, so we played something else. 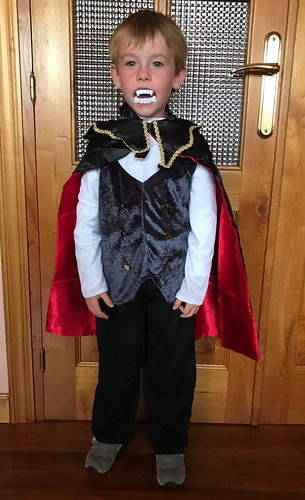