Last Friday was my tenth wedding anniversary, so I invited my lovely wife out to Mina, a restaurant in Bilbao with one Michelin star that we have been wanting to visit for some time. I had the idea only a week before, so they didn't have any tables available, but they did have a spot for us "at the bar with a view of the kitchen". I thought this meant there would be a bar, then a bartender, then some glass, and then the chefs behind the glass, but I was very wrong. They were preparing the food right in front of us. Finding the place was quite difficult. The Nervión River snakes through the center of Bilbao, and Mina is right on the river, but it's at the far end of the tourist-friendly section of Bilbao. Google Maps took us through some pretty sketchy neighborhoods that are near the restaurant. It took us 50 minutes to get there, and another 30 minutes to park. The restaurant called us when we were 15 minutes late to make sure they should save our table. We promised that we were trying to park. By the time we actually got parked, we were bickering like a married couple of at least a decade.

No one would ever just wander in to the restaurant. We tried the door, found it to be locked, and walked around the building to find an unlocked door before we pulled a little harder on the door, made our way up some steps, unsure if there was actually a restaurant there or not, but at the top of the stairs we were greeted by a soft-spoken smiling woman who we would later learn was one of the two cofounders of the restaurant. We took our seat at the bar and were ignored for a few minutes. Eventually a man, who I assume was the sommelier, presented us with an aperitif menu, all around 10€/glass. We declined.

The options available to us were a tasting menu of either 7, 10, or 14 items. We debated, weighing the pros and cons of experiencing more flavors at the expense of potential discomfort of being too full and not enjoying the final items because of that, plus the additional money. In the end we chose the 10-course option and were glad that we did. 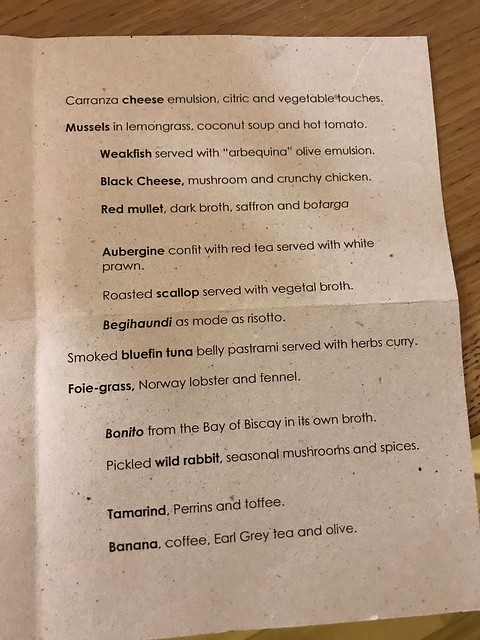 They had an interesting way of separating the items...using indentation. The 10-course menu was just the indented items, and the 14-course menu was everything. So, let us begin... 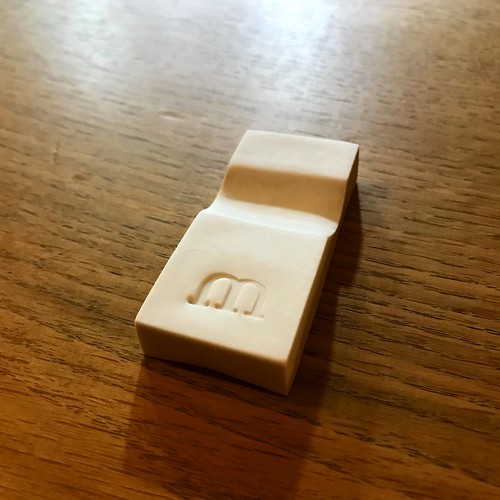 We were presented with this curious ceramic object with the restaurant's M logo. We could not figure out what it was for. Thankfully, none of my Facebook friends could either when I presented them with the conundrum.

The wine menu was immense, with prices ranging from 37€ to 450€. We chose the 38€ bottle with the coolest name. 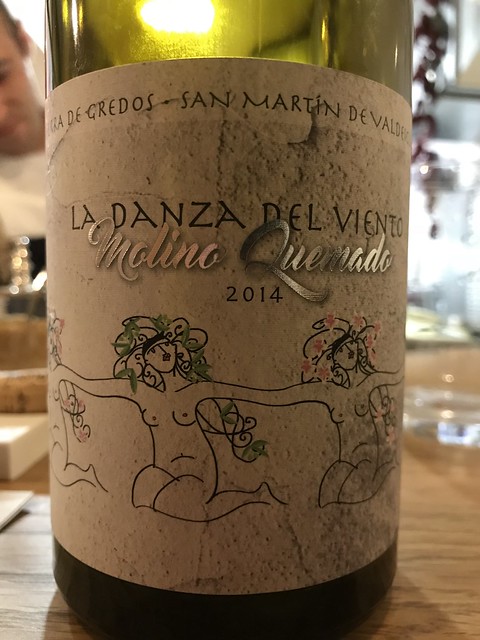 La Danza del Viento - Molino Quemado (The Dance of the Wind - Burnt Windmill) Despite the dark name, the wine was not as dark red as we normally drink, but was excellent. Between us and the waiters, we made it last perfectly to the last course. 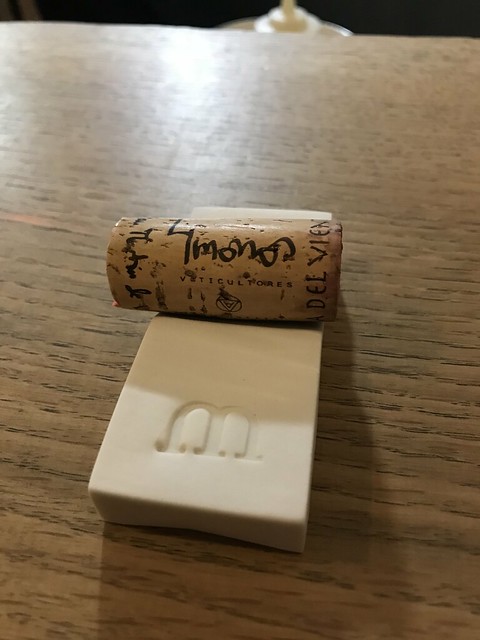 The answer to our previous conundrum. The sommelier carefully placed the cork on the cork holder with the logo facing us. Rich people are weird, huh? 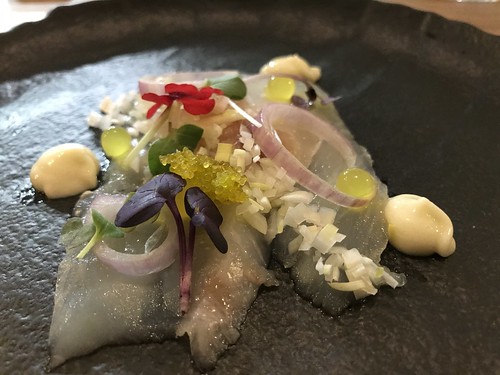 The soft spoken waiters gave us a much better description of every course, but I could barely hear them and certainly could not remember what they said. The weakfish was good, but the presentation was amazing. I think this might have been the prettiest dish. Try and count all those ingredients! We had been watching them make these right in front of us for the fifteen minutes from when we sat down to when they served it to us. 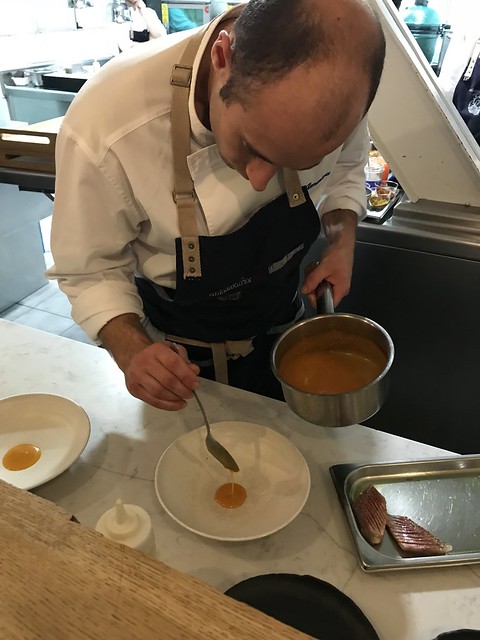 Preparing the next dish. 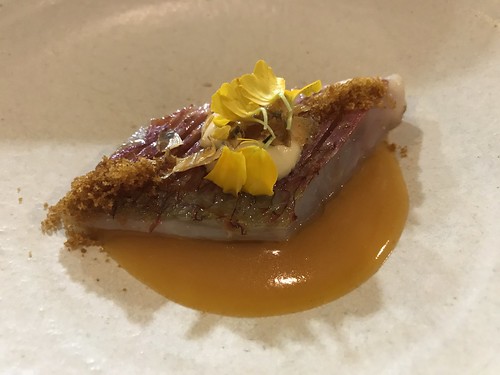 It was interesting to see how, when a mistake was made by a junior chef, like dropping a spoon onto the plate so that the sauce splashed all around the plate, the senior chef fixed it by getting a new plate, pouring a new sauce puddle, and then carefully lifting the fish out of the first disturbed puddle into the new one. 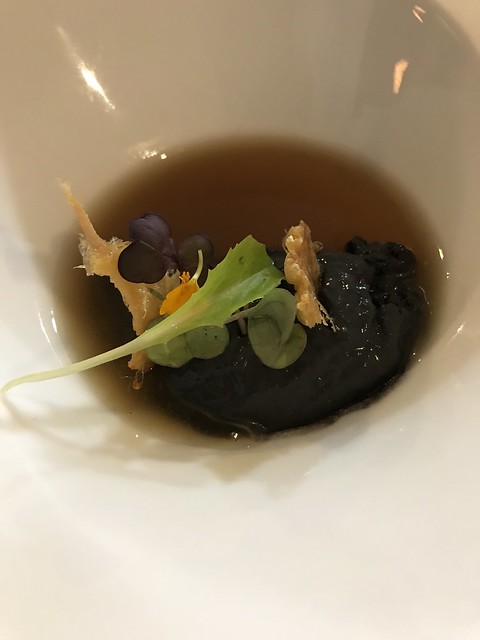 Black Cheese, mushroom and crunchy chicken. The Spanish title for this was Queso Marino, "Marine Cheese". The waiter assured us that, despite it having a very cheese-like mouthfeel, it was made with squid and squid ink.

This was our favorite dish of the night. It was amazing!

In my albeit limited experience little ovoid shapes are a staple of Michelin-level dining. Chefs love to make strange savory ice creams. So it was fun getting to watch the chef making them before us. As everyone knows, you can scoop ice cream better if you wet your spoon, but I was not aware of the trick of rubbing the scoop on your hand to make the ice cream slide off cleaner.

But we weren't to the dessert courses yet... 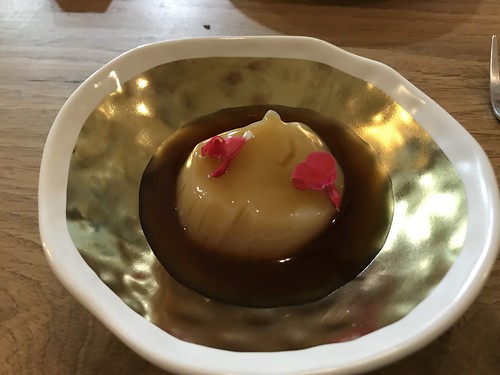 Roasted Scallop served with a vegetal broth. This was good, but not great. The broth was quite overpowering. 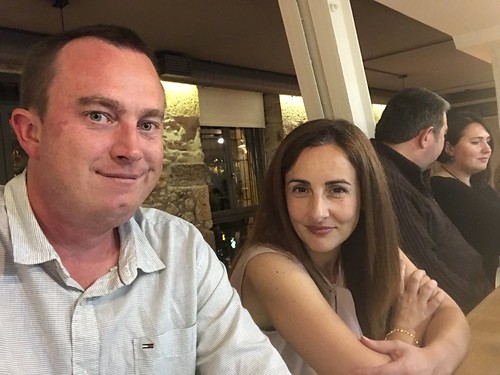 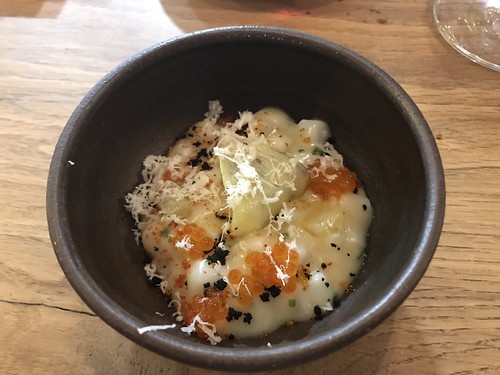 Begihaundi as mode as risotto. It was explained to us that begihaundi is a Basque word for squid, and, in typical fine dining tomfoolery, even though they used the word risotto, there was no rice in the dish, and even what looked like grated cheese on top was really wasabi. I really enjoyed this one, but my wife, who is not a big horseradish fan, didn't finish hers (I did). 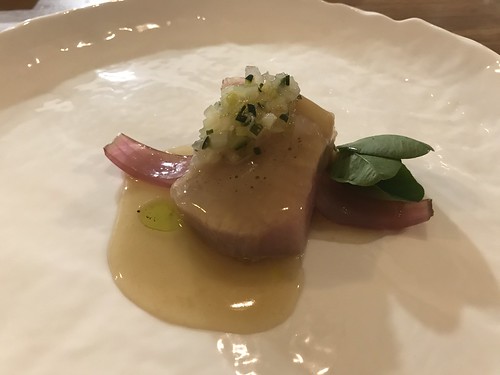 Bonito from the Bay of Biscay in its own broth. Bonito is a Spanish word for tuna. I was surprised to see the term "Bay of Biscay", on both the Spanish and English menus. That is how all the American maps label the body of water I live near, but none of the locals ever call it that. Maybe they use that term more in Vizcaya, the Basque region we were in that provides the name. 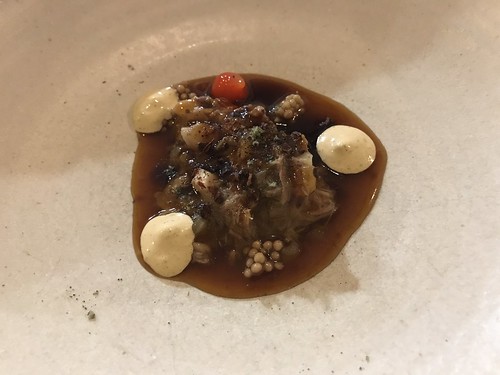 Pickled wild rabbit, seasonal mushrooms and spices. This was the only non-seafood dish, which surprised us. It was very autumnal. 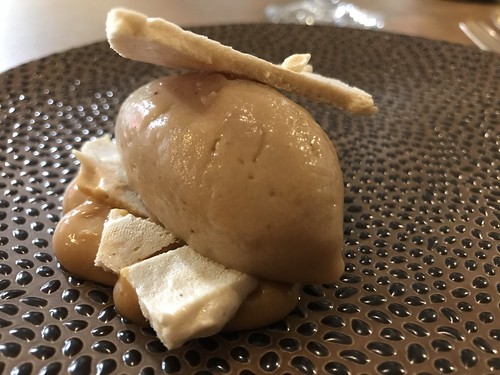 Tamarind, Perrins and toffee. The ice cream we had seen being prepared was toffee flavored. The little cracker on top was really bizarre. Towards the end of the meal, I got up the courage to speak to the chef who was working in front of us. He opened right up and was much more charismatic than the stuffy/formal waitstaff and owner. I asked him about the cracker, because it sort of dissolved on my tongue with a flavor I could not place. He described how they made it. It was egg whites mixed with Perrins and then dehydrated until it was crispy. I had to ask what Perrins was, and he showed me. 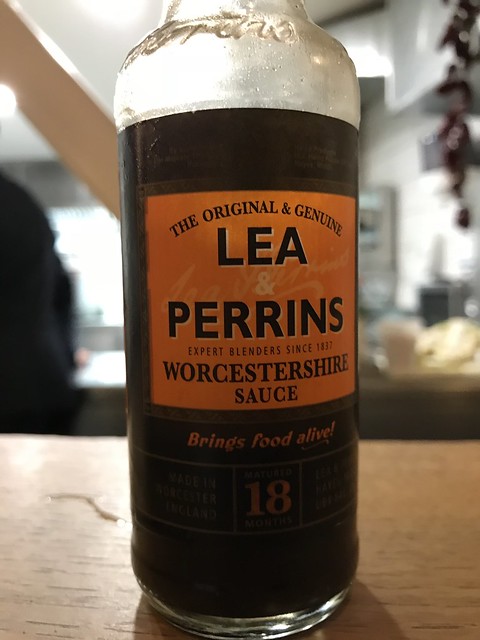 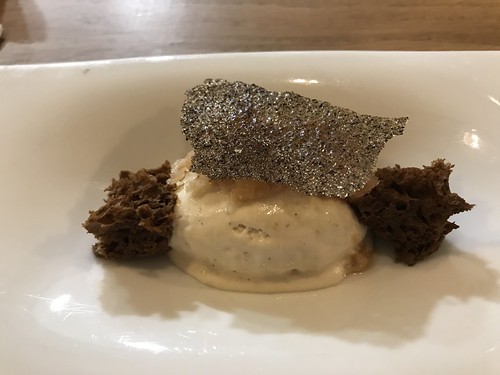 More ice cream with a crisp laminate on top made with black olives and Earl Grey tea. It was pretty good. 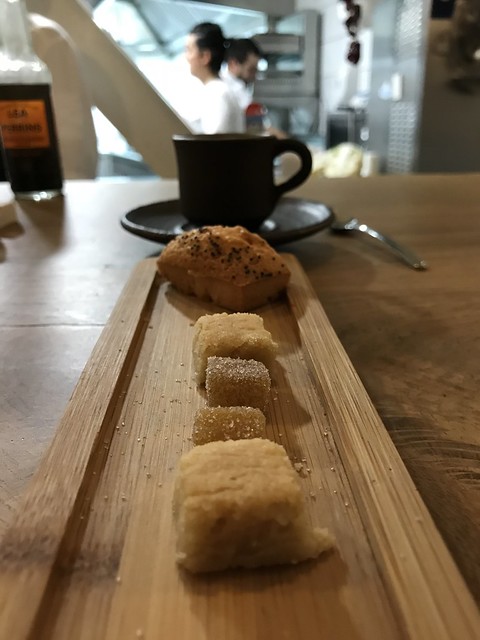 Various biscuits with our coffee.

We paid and thanked them for the lovely experience, and walked back out to the street. It was about midnight, our bellies were full, and the river was calm. 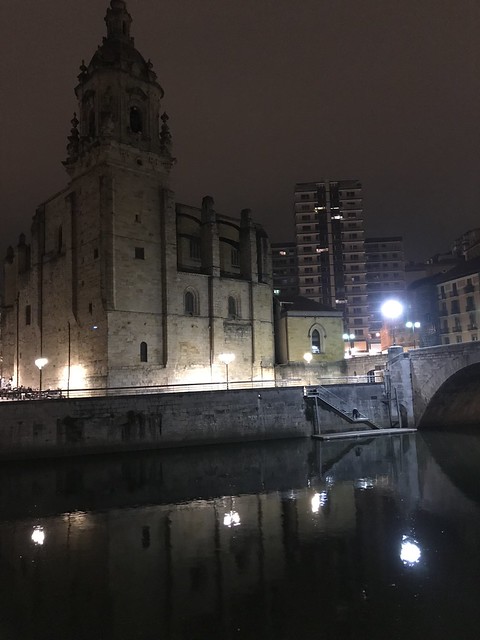