A Maze and The Creepy Women of Torrelavega

After 12.5 years of living in Cantabria, I must ashamedly admit that today was the first time that I visited Cantabria's second city, Torrelavega. It was on a brief, last minute, detour after visiting another local attraction, the Villapresente Labyrinth, a pine hedge maze that has gained touristic significance of late. More to distract the kids for 30 minutes than for strategery, I had figured out how to download an overhead map of the labyrinth, invert the photo, so that the paths were white, and printed out two copies to give the kids.

Nora figured the way in to the center by herself, but my a-mazing abilities were required to find the way to the exit. She then drew over the pencil in colored marker, which turned out to be helpful. 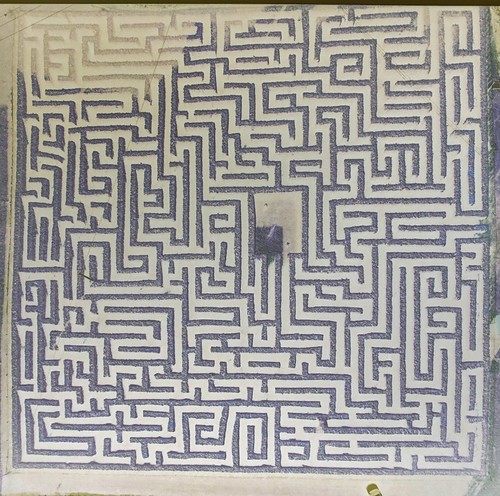 My inverted, pencil-drawable map. Feel free to solve. Entrance an exit are on the right (entrance above the exit).

When we got there, we did the whole thing without looking at our map, which was pretty useless, because finding where the heck you are at any given moment amongst the pine hedges was nearly impossible. 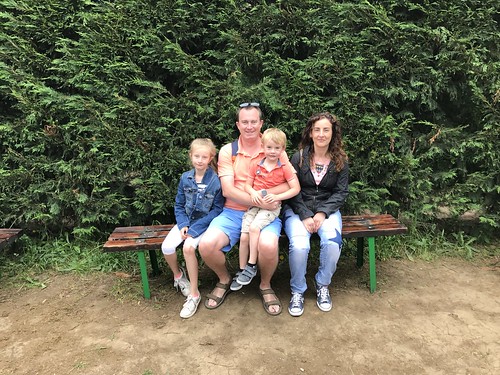 The center held little more prize than some benches to sit on.

They have the maze designed such that it's pretty easy to get in to the center, but much more complicated to get out. By the time we reached the end, some of the other adults around (it was fairly crowded) were pretty annoyed with the whole damn charade. When we reached the end, Ian declared that he was done with the "left or right?" choosing, and then had to choose a parent to leave with. Unsurprisingly, he chose his Mommy.

That left me with Nora to attempt a reverse solution, based on our previous map drawings; we had to go back to the middle and then out to the entrance. We had paid a whole 11€ (4€ x 2 adults + 3€ x 1 7-12 child) for the experience, so we were going to milk it. Plus, it seemed like prime map navigation practice for 8-year-old Nora. She made a few mistakes, but I was always there to describe out the very local surroundings corresponded to a place near where she thought we were on the map, and we continued from there. On the reverse trip, we ran into many people joshingly saying, "Hey, a map is cheating!", to which I responded, "We've already found the exit without a map. You?"

Nora did a fantastic job of navigating us out. 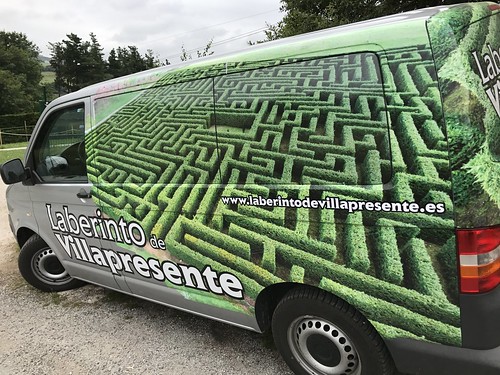 When we finally emerged and were reunited with our wife and brother, we headed to the car. We had seen a sign for the Museum of the Altamira Caves, which is the local attraction of the prehistoric cave paintings. My phone told me that it was only 7 minutes away, but that we would be arriving 59 minutes before closing time. We took the gamble, and arrived just as the security guard was closing the gate.

Fine, we said, and we were off to visit the heart of Torrelavega.

The city itself was relatively uninteresting, but we stumbled upon a work of art that... well, what is art supposed to do? If you answered "evoke emotions", then this was definitely art. Anyone first coming upon this "installation" will have been struck with a feeling of something. It fascinated me how easy it is to convince a human brain that they are seeing another human. 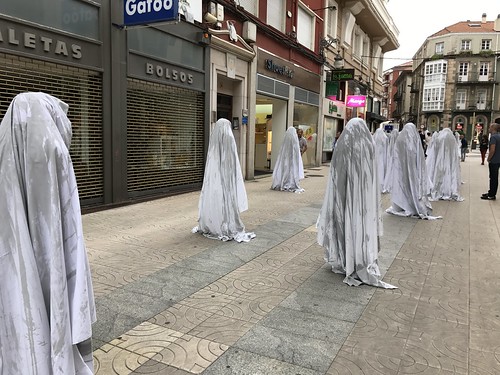 This is what we came upon. Clearly these are women marching, or, if still, posing as if they are marching. Right? 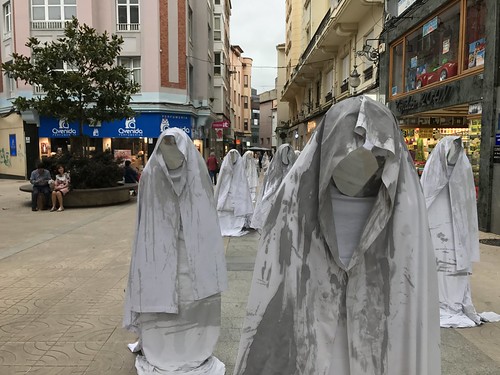 The "faces" of the "women" were mirrors.

Creeped out yet? If it makes you feel something, it's art, right? RIGHT??

I leave you with the map of my "Outdoor Walk Workout", as recorded by my Apple Watch during our time in the maze. 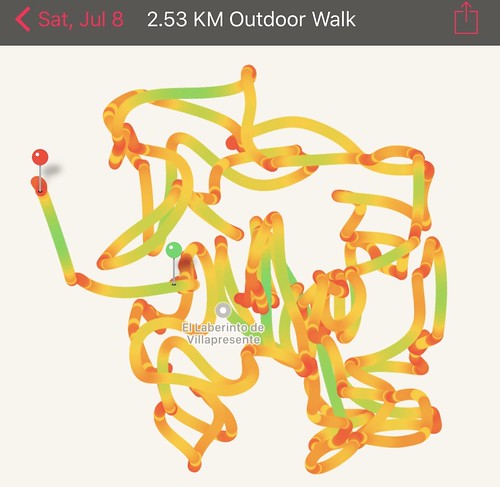