It has been fun watching my children learn my second language natively. I have the special insight into their minds in that they generally speak to me in English, but when they don’t have an English word, they will use the Spanish word, which I immediately translate for them before they complete the sentence. That’s what usually happens, but with both kids, there have been nouns that are always spoken in one of the two languages in our household. With my eldest, I think one was pañal (diaper/nappy), and with the youngest, another is biberon (baby bottle).

Two perfect examples of word parsing mistakes have happened in the past two days with my four-year-old, that I thought I’d share.

“Daddy, how do you say cera in English?”

This word has always tripped me up as well, since it’s feminine and requires a la article, the initial a syllable gets swallowed, and, unless you make a specific pause between the article and noun (which no one does), it sounds like you are saying la cera, when it is written la acera.

The little grove of trees in front of our town hall is called La Alameda, which my dictionary translates to either “tree-lined avenue” or “poplar grove”, as the word for “poplar” is el álamo. Remember it. 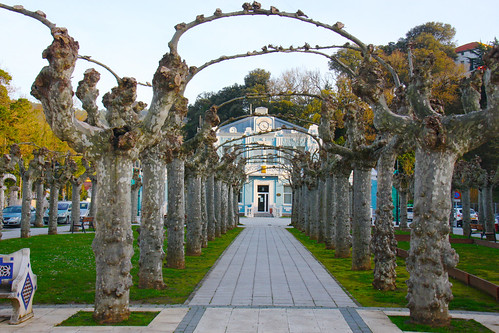 This grove has a playground that is often frequented by my son’s friends, and today he told me, “Let’s go to the park of the Meda!”

This makes perfect sense, as, if we were going to a place called Meda, we’d say, “Vamos a la Meda”. See those previous syllables: “a la Meda” is indistinguishable from “Alameda” if you don’t know how the words break down or are written.

Anyway, I thought that was cute, and I haven’t posted in a while, so there. 😄