I returned for a third visit to St. Paul after Peter and Tina separated. Peter was living in a small apartment. We went out at night and played frisbee golf, and we reminisced about old times. Bloodball. Accidentally getting into a pickup basketball game against varsity players at SIU. The sound made by Kentucky Derby horses as they raced past our spot on the rail in the infield. The decibel level at Indianapolis. The time Peter poured a gallon of cold milk on the back of his sunbathing girlfriend, and the look on her face. Potato Sausage soup made with Sauce Maurice. The time we played the same pinball machine for 18 hours on a dime. Eating oysters on Bourbon Street. The time we were camping out and a raccoon ran off with our whole loaf of bread. Corn. In November of 2002 I got a call from Peter's father. He told me that Peter was hospitalized and not doing well. He suggested that I might want to go see him, but he cautioned me that Peter was no longer responsive. I flew to St. Paul the next morning and went directly to his hospital room. Peter's eyes were closed, and he never opened them. I spoke to him for awhile, but it was difficult for me, and I stayed less than an hour.

"I apologize to everyone."

That night I ate dinner with Tina. It was an early wake for Peter, but we also caught up with each other, and refreshed our already strong friendship. I spent the next morning with Peter in his hospital room. About midmorning, while I was gazing out the window, I heard Peter say "I apologize to everyone". I looked at him but there was no change. I didn't believe my ears. There was a nurse in the back of the room making notes, and I was about to ask him if he had heard Peter speak when the nurse said "He doesn't need to apologize to me". 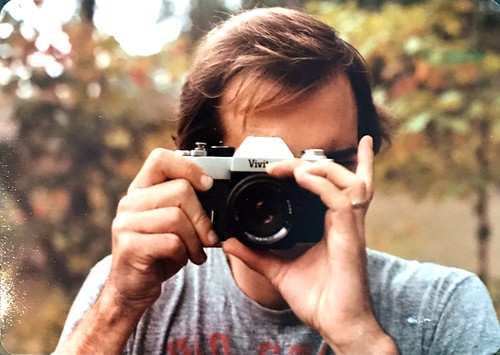 The best picture of Peter I ever took

I spent another hour with Peter, holding his hand and talking to him, but he never spoke again or even indicated awareness. I drove back to the airport, and flew back to North Carolina. On the flight home I thought about Peter's last words. He may not have needed to apologize to the nurse, but he was right about his need to apologize to many people. When we were young, Peter offered the wittiest retorts, but he usually came off as arrogant and abrasive. Hell, he was arrogant and abrasive. Many times over the years I took pride in the fact that while he drove everyone else crazy, I alone could live with him. I guess that was because I loved him like a brother. If I am able, I will steal his final words and make them mine.

When I got home I learned that Peter died while I was in the air. For better and for worse, he made me what I am today.