When planning our Sunday with rain in the forecast, we brainstormed several ideas, including the San Sebastián Aquarium, but in the end we settled on the Eureka! Science Museum, or Eureka! Zientzia Museoa, in Basque. Having driven two hours east to San Sebastián, we had a slight head start on the also-eastbound rain storm. We decided to visit the beach and see a strange mangled-metal art piece jutting out of the rocks, aptly named el Peine del Viento (The Comb of the Wind).

The beach. There were a few knuckleheads swimming. 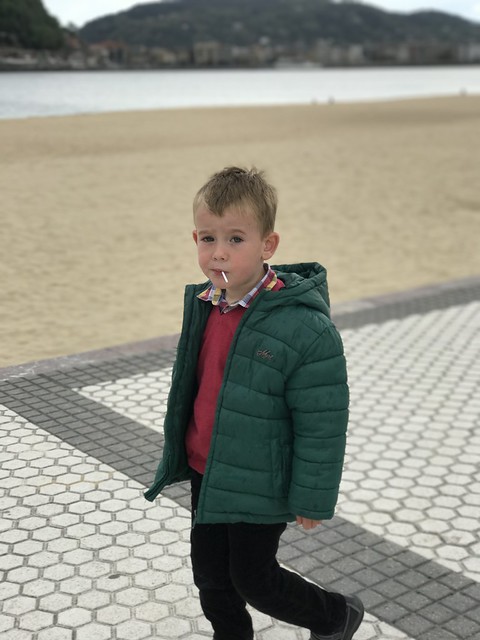 Anyone else reminded of iconic images of James Dean with a cigarette hanging from his lips? 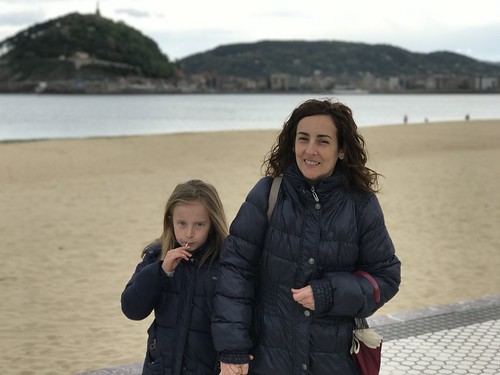 The girls were a little cold. 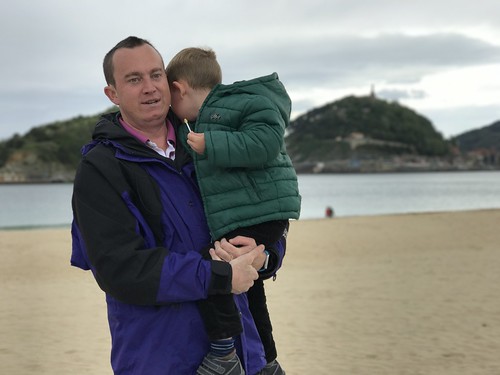 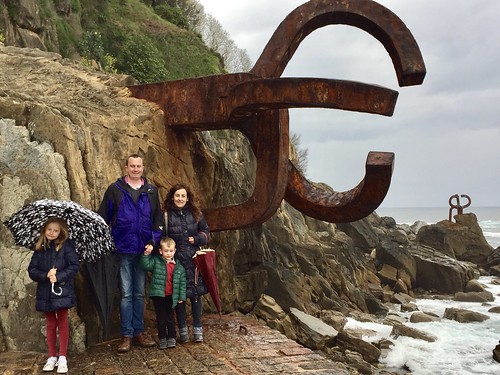 Everyone was posing here, so we sheep'd on in and did the same. 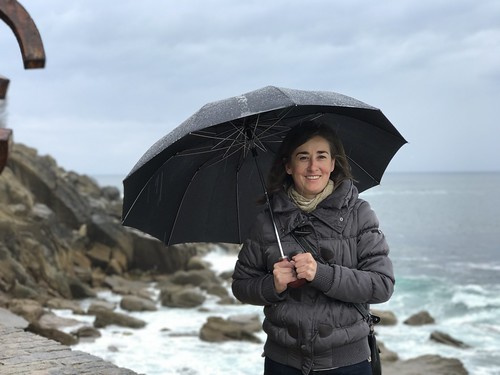 After a bit of wait in the wind and rain, my sister-in-law showed up to accompany us for the day. The camera and the model get most of the credit, but I think this is a pretty great photo. 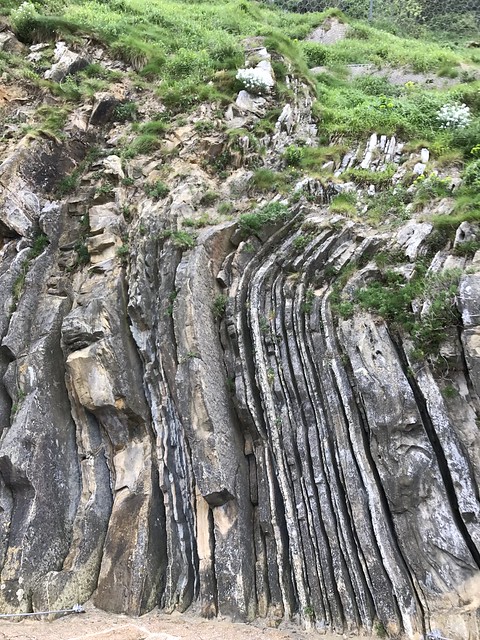 Cool cliff face. It's neat how sedimentary rock can be pushed to perfectly vertical like this. 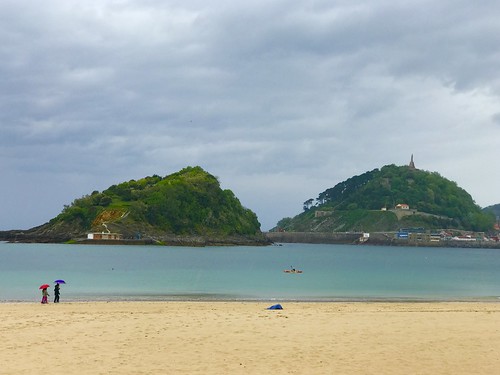 One last look at the brazier-like geography as we scurried in the rain to find a place to eat lunch. That blue building directly under the tower is the Aquarium, which will remain on our todo list.

And, if there's one word you need when you are hungry in San Sebastián, it is TAPAS. (or, if you're cool, pintxos, pronounced pinchos) 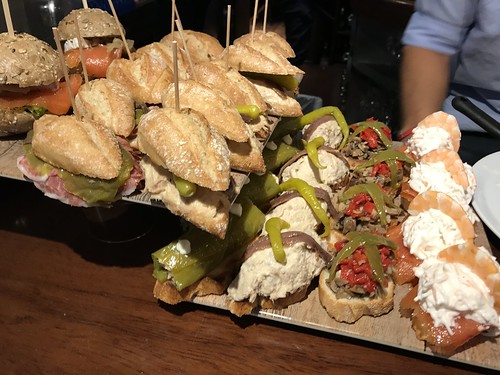 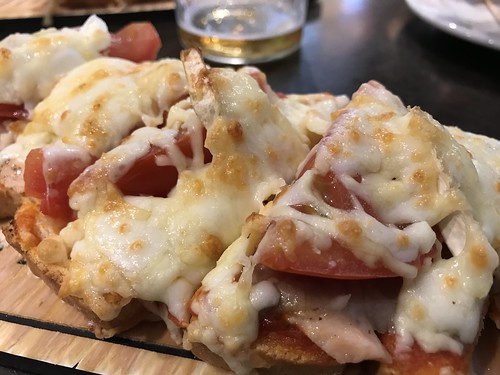 They have these delicious things called tostas, which are slices of bread, toasted, with toppings, not too dissimilar to a pizza. I had one with smoked salmon, tomato, and goat cheese. Delicious!

Metaphorical fuel tanks full, it was time to head to the science museum.

The woman at the ticket desk was one of these people that do their job so well, you feel like applauding. She immediately gauged us for what we were, determined what sort of experience we were looking to have, explained all the schedules of all the shows, pointed to the map upside-down (from her perspective) and generally did a fantastic job. It was complicated because the shows (and all of the museum) were divided into three languages: Spanish, Basque, and French. All three adults commented on her professionalism after we walked away. Plus she didn't ask if Ian was over the 4yo cut off, which he is as of last week, so he got in at the under-four price.

The first thing we went to was a show about electricity. It was suitably awesome even for those of us with university degrees that knew all the answers the presenter asked of the audience. The age limit for the show was 4+, so our 4yo that didn't pay like one got to see it. Afterwards he claimed it was boring, but during the show, he was as still and attentive as I have ever seen him, clearly rapt. The electricity presenter, who was about 24 years old, did a fantastic job.

The presentation involved the usual suspects, starting with a plasma globe, and ending with a Van de Graaff generator connected to a Faraday cage full of small Basque children. Not unlike an electrical charge shorting out, the amazingness of Nora's hair as a candidate to touch a Van de Graaff generator canceled out perfectly with her shyness to volunteer to be in front of an audience, so some other more outgoing kids with worse hair were chosen. Sadly the Tesla coil, which was the grand finale, was broken this weekend. Still, it was an entertaining show for people of all levels of physics knowledge.

After the show was over, we wandered the museum. 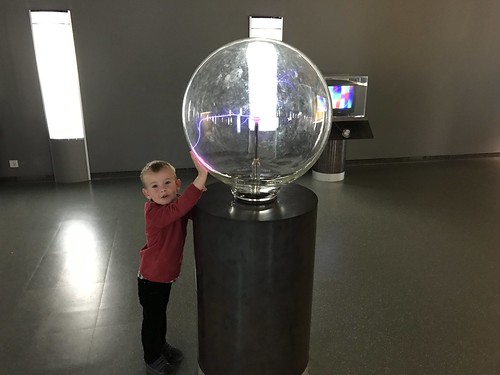 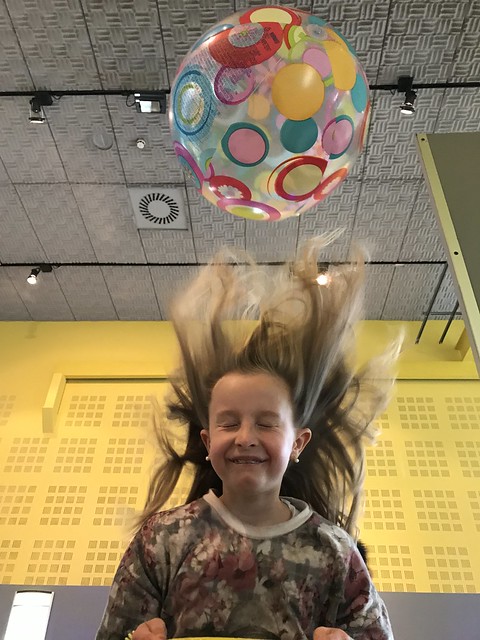 It turns out that these vertical columns of air that make beach balls hover can also make your hair look awesome. Who needs a Van de Graaff machine?! 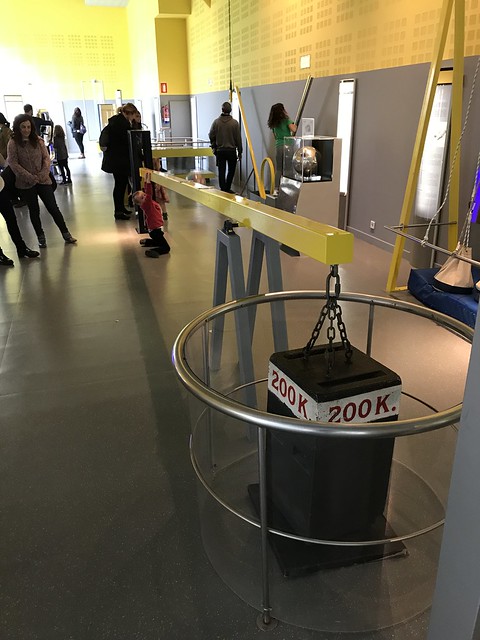 Ian lifting 200kg with the power of leverage! 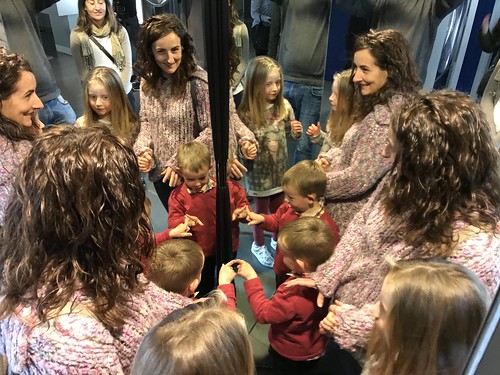 In the mirror room, things got a little crowded. 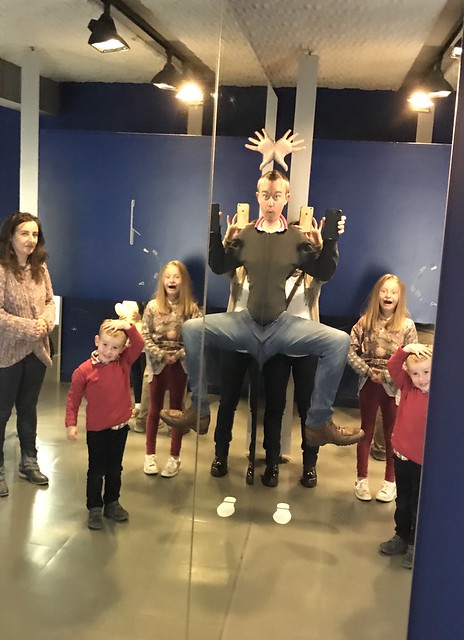 This was literally the thing that most blew my mind in the whole museum. It's a cosmic ray detector. Every little "worm" you see appear is caused by a cosmic ray from the universe, potentially emitted billions of years ago, interacting with the liquid in the detector. WOW!

Then it was time to go to the planetarium. They weren't having an actual planetary show, but it was a short film about a polar bear and a penguin that traveled to Mars, and then to Saturn to investigate how Mars also has icy poles, but Saturn has icy rings. The promotion of the myth that it's easy to zip between planets with a single jump cut bothered me, but I would definitely rate the 30 minute film as "watchable".

Then I went outside to drench my rear end on a rain-soaked bench for a photo op. 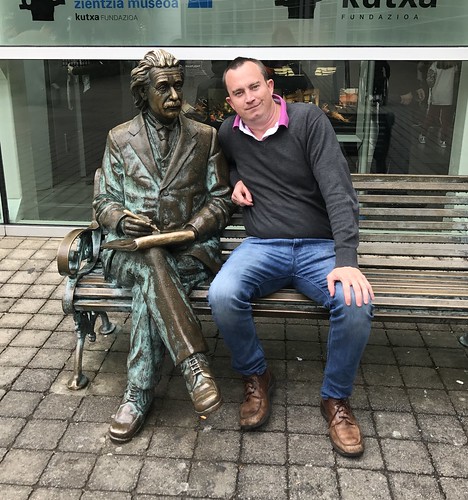 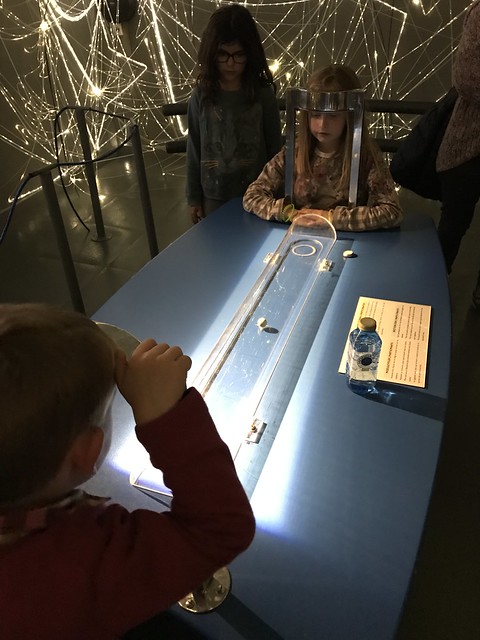 Back inside we played some Mindball, where the most relaxed person wins, according to brain waves supposedly read from your forehead. Unsurprisingly, the simpleminded boys in our family defeated the complex girls.

Then it was on to the anatomy exhibit. 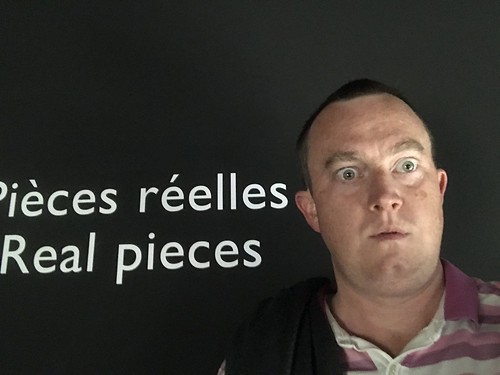 There were many, many signs warning us that all the human and animal specimens were 100% real and 100% dead. 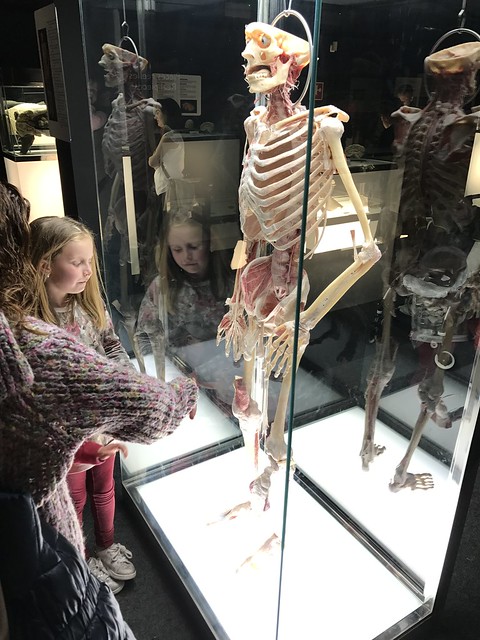 Penises are strange, with or without skin. 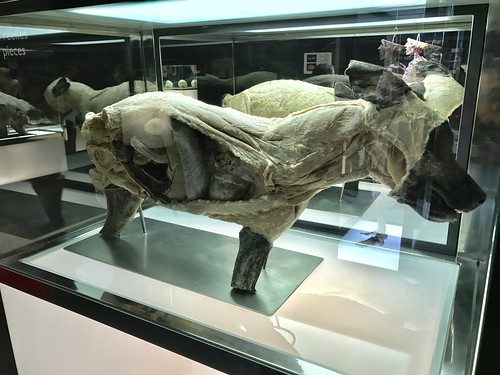 This dog reminded me a little too much of meat. When I commented this to my sister-in-law, she walked me over to the dead human and convinced me that it, too, looked like a fine cut of steak that might go well with some fried peppers. Disturbing, but true, Clarice. 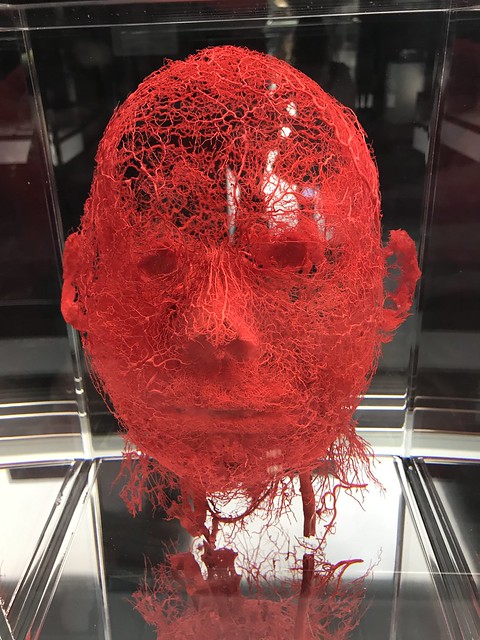 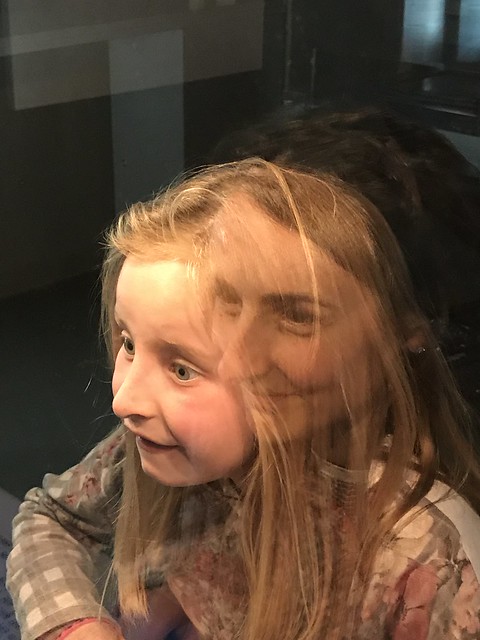 These panes of glass that you can change the lighting on each side are always creepy. Despite her father usually getting most of the credit/blame for Nora's appearance, she definitely shares some traits with her mother. 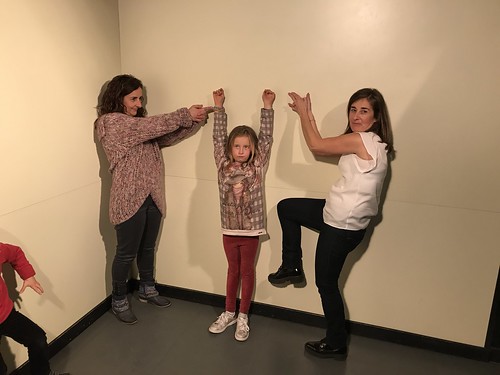 This photography room took a new "photo" every 20 seconds, leaving your shadow on the wall. 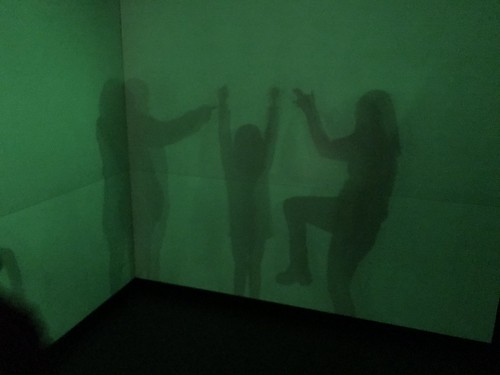 It was literally 4 minutes of fun!

With our time up, we headed back out to the car and got to briefly enjoy the exhibition of miniaturized local famous buildings, mostly various town halls and universities from the surrounding area. 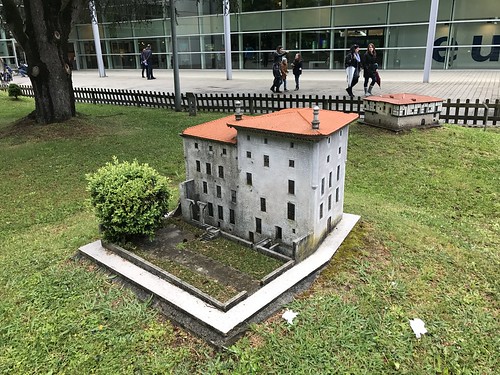 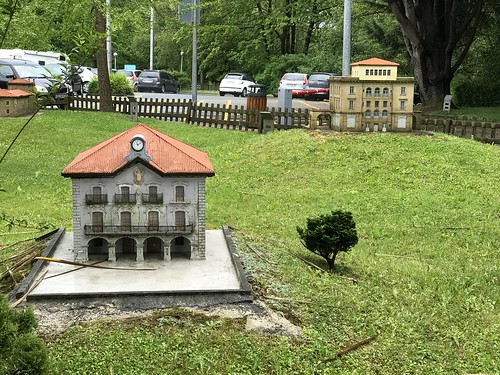 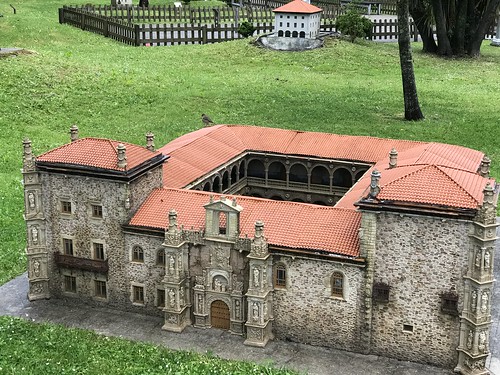 The level of detail was impressive.

We drove the two hours home and all zonked out in bed almost immediately. Hooray for Science! Gora Zientzia!