What follows is a serial essay written by my father, Paul Rasmussen, about his best friend, Peter Brown. Part 1, Part 2, Part 3

During the day I took classes and interned at a mental health center in another town, and Peter took some Social Work courses. At night we played pinball. As was our habit, we brought our autistic analytical skills to the task, and became very good pinball players. We joined the International Pinball Association and became card-carrying members. I was "Flips", because of my mad flipper skills. Peter was "Plunger", because he was agonizingly slow introducing each ball into play. Having previously determined the optimum amount of momentum the ball should carry as it exited the chute, he would routinely bend over and examine the plunger marks closely before loosing the ball. 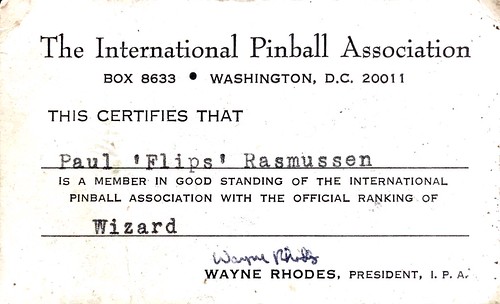 We became good friends with John, the owner of the pinball parlor, and regularly helped him out behind the counter. When John held a pinball marathon with a hundred dollar prize for the team which played one machine continuously the longest, Peter and I joined a fellow named Louis and entered. Louis was pretty good, and Peter was much better, but nobody in town was as good on this particular machine as I was. Before we started, I told my teammates that primarily we wanted to win the prize money, but secondarily, if we could do it, I wanted us to try to play the entire time on a single dime. 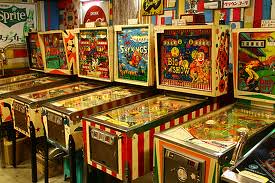 It would be difficult because the free games counter on Gottlieb machines only goes to 15. It also required winning one or more free games on the opening game.

Much as we had for Putt-Putt holes, Peter and I began to document all the existing pinball machines. For each machine we encountered, we drew a diagram, and recorded payouts and best strategies. We stopped in at unknown bars and bowling alleys whenever possible in our search for different machines. Along the way I learned a great deal about the different machines. I loved the short, solid reliable Gottlieb flippers, and Gottlieb's classic art. Williams machines had longer flippers which produced faster ball speeds. Bally's machines were loud and colorful, with many ramps and spinners. 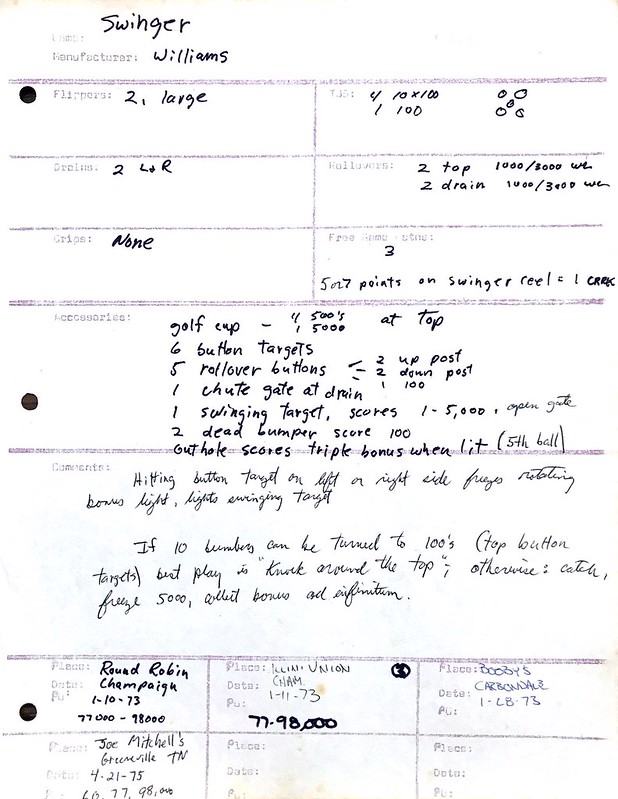 My friend Peter was not easy to like. He was naturally overbearing, and could be quite critical. He tended to perseverate on many topics, and many people just tuned him out. He tended to expound in such detail that it was mentally exhausting to keep up with him. He didn't really have any good friends other than me. Nevertheless, sometime that fall Peter and Mary became an item. Mary was one of the thirteen students in my Behavior Modification graduate program, and had become a good friend of mine during the previous year. Their love for each other didn't really affect me, except of course they argued more.

In December Peter made himself a Doctor's appointment, and for some reason I went with him. I stayed in the car and read a book while he went in. When he came back to the car more than an hour later he was pale and shaken. He explained to me that he had known for several years that this day would come, so it was not a complete surprise to him, but that his kidneys were shutting down. It was a surprise to me. Peter explained that he had been told he probably had less than year to live unless he received a donated kidney, or arranged for regular dialysis. We didn't talk about it much, but when he told me that he had learned that all three of the pinball machine manufacturers were field testing their new machines at the New Orleans airport, and asked me if I would go to New Orleans with him, I said yes. When he suggested that, if New Orleans didn't work out for us, we might move on to Miami, I said sure.

In January I was through with all my graduate work except for my masters thesis, which I had not yet begun. In fact, I had no ideas for it. Early in January, Peter and I packed up my Volkswagen Beetle with all we owned and took off. Our plan was to try to earn money hustling pinball at the airport. If hustling didn't work out, we would diagram all of New Orleans' pinball machines, then drive to Miami and write a book about pinball. But — a funny thing happened on the way to New Orleans.