What follows is a serial essay written by my father, Paul Rasmussen, about his best friend, Peter Brown. Part 1, Part 2

It was a beautiful morning when we left Beloit. I had the top down on the bright red 1963 Ford Galaxie 500 convertible I had bought shortly after Christmas for $300, and Peter was driving his very used 1950 Cadillac. We stopped at a roadside stand just outside of town and bought a couple of quarts of fresh strawberries. For 20 miles I pitched overripe berries high in the air, splashing them onto Peter's windshield when successful. He passed me on the largely deserted interstate, and retaliated in kind. When we had used or consumed all our ammo, we resorted to one-upmanship. He passed me slowly, never glancing at me, while sitting in the passenger side. I passed him, laid back with my crossed feet up on the dashboard while I pressed a golf club on the accelerator. We were young, reckless, and happy. 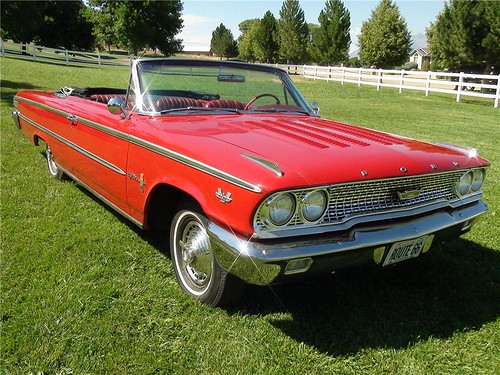 Peter rented an apartment and got a job as a city bus driver. I slept on his couch, and lived off the numerous coins he dumped from his pockets onto the living room floor every night on his way to bed at the end of his shift. While he slept until afternoon, I would get up, roll the coins, and walk them to a bank to exchange them for the day's paper money.

Some afternoons we played Putt-Putt. A professional league had just formed, and we dreamed of making money as professional putters. It was a good game for a couple of logicians to tackle. Unlike other miniature golf courses, all Putt-Putt holes are exact replicas of about a hundred different hole designs. All holes are par two, and all holes can be aced. All the side boards are metal, so bounces are consistent. For each hole, there is a single best way to attempt to ace it. 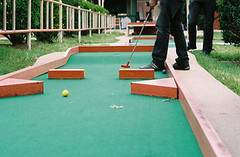 That summer, Peter and I applied our Aspergers-like focus to Putt-Putt. Peter shmoozed the attendant, and he looked the other way when we skipped the ball-eating 18th hole. We recorded our scores on all the different holes we played, and took our scorecards to the University of Illinois computer center. Using Peter's father's physics department account code, we learned a little Fortran, entered the data on punch cards, wrote a control program, and put our card stack in the queue to be run. Ten minutes later we could pour over our green and white striped pin feed printout and determine which holes we were worst on. Armed with this knowledge, we would practice our bad holes over and over, letting other putters play through when necessary. Spending my practice time working on things I was bad at instead of things I was good at is one of the many things Peter taught me.

Peter's parents lived in Champagne, and we occasionally went there for a meal. Peter's father was a gourmet cook, but I only remember one meal there. Corn. Just corn. But we did it right. First Peter's father filled a large pot with water and started it boiling. Then we got in his car and drove a quarter mile to where the University of Illinois Agriculture Department had planted a field of their brand new Illini Super Sweet variety. We quickly stole 50 ears, and sped home to our boiling water, shucking as we went. It was, of course, the best corn I ever ate. I ate 10 ears, while Peter and his father each had 12. Peter's step-Mom couldn't stand watching us slobber our way through so much butter and corn, and had to leave the room.

Some nights we visited Tuna, an old high school friend of Peter's. Tuna's front door had a permanent sign saying that a writer lived there, and didn't want to be disturbed. "Please go away!", it said. Tuna may have been a writer during the day, but at night he was a chess player. He had dozens of chess sets scattered around. The one he liked most was built like a pyramid, with the four middle squares elevated the highest to emphasize their importance. We talked chess and played chess until Tuna's wife went to bed, and then we talked chess, played chess, and smoked Tuna's weed. Tuna kept his weed in a wooden box which opened to reveal more than a dozen drawers and compartments. On special occasions Tuna pulled weed from the vial marked "All the weed I've ever smoked". He explained that a little of every new bag of dope went into that vial, and always had. Since the vial had never been empty, it followed that it contained some from all.

I learned about openings, middle games, and end games. I learned the Ruy Lopez, and the Sicilian Defense, and I fell in love with the Queen's Pawn opening. Our best games were when Peter and I teamed up against Tuna, with Tuna playing blindfold. Once we beat him.

One night we visited Peter's old high school friend Mark. While Peter and others from his elite high school went to college, Mark stayed home and moved off the grid. Five miles from town, deep in old growth pines, Mark had built a cabin from a Mother Earth News design. His garden, goats and rabbits provided almost all of his food. He claimed he wouldn't need to go into town at all if wasn't for beer.

After sharing a fine product from his garden with us, Mark took us to what he called his "canopy". It was incredible, perhaps even more so thanks to his garden. First we walked 50 feet from his front porch to his entry tree. "Follow me", he said, as he climbed the tree. The branches were worn from use, and easy to climb. Fifty feet up, and again 100 feet up, were small wooden platforms and rope bridges extending to other trees. Mark was fearless, and before long I felt comfortable too. It was beautiful in the trees, but the best was yet to come. We descended by walking further and further out onto a limb away from the trunk, while holding onto a higher branch, until the branch you are standing on descends far enough for you to step off that branch onto another branch! Then, repeat. It was thrilling, and much safer than it sounds.

A friend of Peter's told him the exact location of a marijuana patch out in the country, hidden in the middle of a corn field. One night Peter and I drove out and found it. The plants were over 10 feet tall, and there were hundreds of them. We waited a few nights, then drove out a second time, this time with knives and large trash bags. We labored for an hour, filling two large bags, then we hid the bags amongst the tall corn, and drove home. A few nights later we drove out a third time, quickly picked up our hidden bags and headed home.

Over the next few days I learned a great deal about the difference between the imported marijuana I had been exposed to, and industrial hemp planted in vast quantities in Illinois during World War II. The minuscule amounts of THC in hemp made it worse than worthless, since it still came with legal risk. Its only value was the slight placebo high it could produce in a person who smoked it before they realized what it was. We bagged it all, and gave a bag to anyone who wanted one. That didn't get rid of much though, since our friends knew better.

The harvest had been a bad idea, and I was anxious to put it behind me. Very early one morning I walked through a section of town where the homes had mailboxes on the street, and I put a bag in every third mailbox until all the bags were gone. I figured that one might say something to one's neighbor, but only the people next door to you. Anyway, problem solved.

In August I found out that not only had I had been accepted into the Behavior Modification Masters Degree program at S.I.U., but they would pay me $222.22 each month, so on September first I said goodbye to Peter and drove to Carbondale to begin two years of graduate school. Peter stayed in Champagne, still driving a bus. The next summer, though, he moved to Carbondale to join me. By then I was anxious to move out of my over-garage one bedroom apartment, which through no fault of my own had become totally flea-infested. Peter and I joined my friend Mary, and the three of us rented a three bedroom apartment underneath a mental health center. Our deal with Mary was that we would buy all the groceries, and she would do all the cooking. The arrangement worked out well.

I am not sure when Peter and I combined our finances. I guess the process started in Beloit at Goody's when it stopped mattering who paid for the beer or the Italian Beef sandwiches we routinely had delivered there. We never discussed it, but at some point we crossed the line and became family. From then, until the end, whoever had money paid, and there was no accounting.