For much of my adult life, I have been rather cynical about the value of protests, people rallying in the streets with big poster signs, in opposition to whatever decision those in power have made. I have watched news coverage of thousands upon thousands of people protest everything from the Iraq War to local taxation laws to Occupy Wall St. And with all that effort, I have not seen a single thing gained. The Wall St. fat cats suffered not one iota, the Iraq War went on as planned, and the local government did whatever the hell they wanted. As the world has now come closer to total nuclear annihilation than it has ever been in my lifetime, which began during the height of the Cold War, due to the election of an emotional toddler lacking all self control into the room with The Big Red Button, a new wave of protests has begun.

Yes, I understand that many of the most important civil rights movements, from women's suffrage to desegregation, were won by strategic, ceaseless, tireless protests, but those were before my time, and I wonder if history may paint with a different brush than the current news as you live it. I guess all movements are a failure right up until the moment that they aren't. 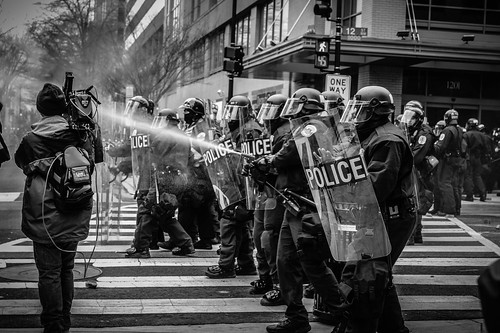 The reason I'm posting about this today is that today I heard the best argument I've ever heard about protests and their effectiveness, from one of my favorite sources of news journalism, On The Media. It was spoken by their guest, David S. Meyer on the episode Breaking News Consumer's Handbook: Protest Edition: (bold is mine)

BOB GARFIELD: We’re talking about the nuts and bolts of protests, but do they really matter? Do they ultimately ever change our politics?

DAVID S. MEYER: Not by themselves and not necessarily in the short run. It's quite likely that these large demonstrations in Washington, DC, and the airport protests are going to be followed in short order by political defeats, but in order to execute those policy gains that the movement fuses defeats the Trump administration is going to spend political capital. They're going to strain political relations with their own allies. And you often see the impact play out over long periods of time.

So, for example, in 2009, the Tea Party focused on stopping ObamaCare. There were big rallies, disruptive town hall meetings and, in the short run, they lost; ObamaCare was passed. But the Tea Party actually grew afterwards, and we’re seeing a president who’s really the Frankenstein monster of the tea party now. So yeah, protest matters but not as quickly as the story mass media like to tell. And if you go into a bar and watch people drinking and watching a soccer game, you'll see them cheering and yelling about a run down the side of the field that didn't lead to a score but it did tire out the opposition, it did reveal weaknesses in positioning and it did set up another score, maybe 40 minutes later. European viewers have some sense of how that game works. Americans don't.

Leave it to a Spanish immigrant to fall for a fútbol analogy!