Several years ago, I became aware of this truly bizarre festival celebrated in Cantabria, my region of Spain, on the first Sunday of every year. Since learning of its existence, we have always been busy doing some other family thing winding down Christmas when it is held, but this year we finally made it! The festival is called La Vijanera, and it is the most pagan thing I've seen since I took down our Christmas tree yesterday. 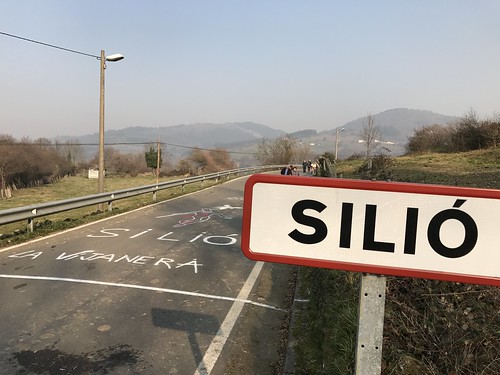 The festival is thought to date back to Roman times, and involves loudly scaring away the evil spirits as we change from one calendar year to the next. To quote / blatantly plagiarize Wikipedia:

Originally, La Vijanera was celebrated in the valleys of Iguña, Toranzo, Trasmiera, Campoo and Polaciones but now the only place in the region where it is just Silió. The first carnival of the year in Europe is a colorful masquerade involving approximately 60 characters (all male), la madama, el mancebo, los trapajones, el oso and su dueño, el pasiego, el caballero, la Pepa or Pepona, el médico, el domador, el húngaro, el viejo and la vieja, all dressed in a colorful and own function and symbolism.

But the real stars of the festival are los zarramacos because of the importance of their role. These are people dressed in sheepskins and weevils hats in addition to carrying the face painted black that will ward off the evil spirits during the year that jingling bells that are tied to the body. Its mission is to expel these spirits of the town coming up to the limits, tradition that points to much more ancient probably from the Roman times.

The second part of the celebration is to review the year end. The Vijaneros waiters gather at the town square and read some verses that, in popular language and tones ranging from jocularity to the cruelty, analyze what happened in the past year from local to international.

The fiesta ends with two acts, first produced "la Preñá", ie the calve or birth of the new year. After that, La Vijanera concludes with the death of the Bear, which symbolizes the victory of good over evil and the desire of good intentions for the new year.

As can be seen in this fiesta represents the desire to banish the last year and pave the way to the next year to begin with enthusiasm and good wishes. Perhaps because of this that the Roman god Janus is responsible for chairing La Vijanera. In fact, Janus in Latin derives from Jauna, ie gate, so it may want to mean "gate between two years" if it consider the prefix vi-(bi-, two).

With some effort we managed to rouse the troops, my wife and kids, my in-laws, and my sister-in-law, and leave home by 10:30. Silió, the town where the festival takes place, is an hour away, and the festivities were supposed to start at 11:30. Luckily, it was motorway pretty much the entire trip, but even so we had to stop 65% of the way there for a kid puke break, and we burned a half hour in a shopping center parking lot.

As we approached the town, we got to Molledo, the next town over, and immediately saw that everyone was parking their cars up on the sidewalk for as far as the eye could see. My Google Maps app told me that we were still 2.5 kilometers away, but it looked like parking sooner rather than later was the right thing to do. This was the first in a long series of ovine-minded "everyone else is doing this, so I guess we should as well" decisions that we made.

My phone had told me that, although it was 1°C when we left home, it would be 9°C by noon in Molledo. When we parked the car at noon, the temperature was -0.5°C. Forecast fail.

Luckily we had a 2.5 km walk to warm us up, and we had a steady stream of people to follow, so between all of us, it sort of seemed like we knew what we were doing. Eventually we left Molledo and got to the turn towards Silió, our destination, where there were two policemen, blocking the way, along with a hand-drawn sign saying something about how only cars whose registration ended in X could pass that point. Later we saw another hand-drawn sign next to a cow pasture stating that only cows with tags ending in X could pass, so I cannot be sure if they were actually letting in some cars or if they were poking fun at new congestion measures that they have implemented in Madrid recently. As we continued to walk the icy streets, some cars did pass us, but very few, so we cannot be certain. Also, all available parking anywhere near Silió was occupied, so maybe the cops just started blocking people when they knew it was full.

About a half kilometer before we got to the town, we got to a line drawn in the road. We had seen this line in videos from previous years, so we knew it was significant. More strangely, a crowd seemed to be gathering near the line. Something was clearly about to go down. So we copied the others once again, and took up camp near the line, leaning against a freezing guard rail and waited. And waited. And waited.

30-40 minutes later, the action began. Video below. A parade of very strangely dressed characters came dancing down the road, very loudly. They stopped at the line, and it's my understanding that some good guys symbolically defeated some bad guys, and they turned around and headed back into town. We, and the other 2,000 or so people followed.

At a very slow pace, we eventually arrived to the little town of Silió, realized that there was nothing to do there (the festivities do continue, but they don't involve food), and it was 2:00 PM, the time of day when Spaniards take seriously the question of "Where are we going to eat lunch?", and we decided to turn back. It was a long walk back to the car, and it was decided that the old and young were holding back the pace, so a party of drivers split off and walked faster to the cars, and came back for the stragglers.

We chose a nearby (and on the way back home) town of Puente Viesgo for lunch. The main tourist attraction there is some caves with cave paintings, but we ended up not having time for that. We had a great lunch, walked around the town for a bit, and hopped in the car to come up, arriving just after dark. 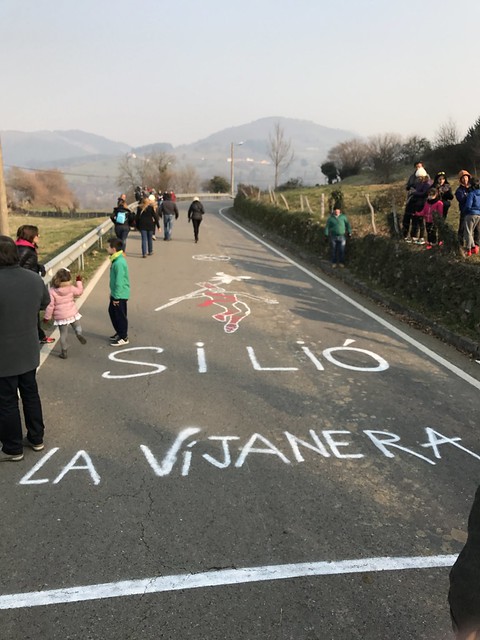 The line that was "defended". 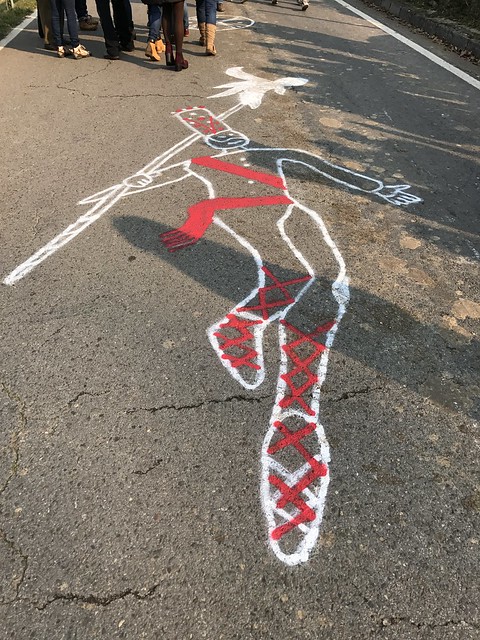 Some of the people were dressed like this. My guess is that they are the heroes of the day. 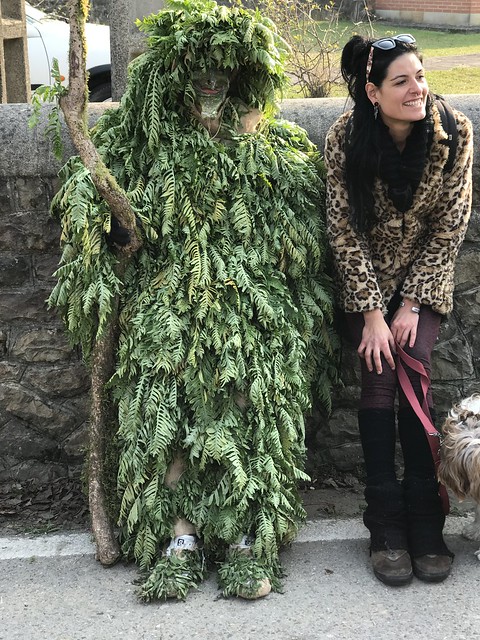 Some of the spirit monsters looked like snipers. As a parade it wasn't even remotely scary, but if you were walking through the forest and a few of them jumped out at you, you'd do what bears do in the woods. 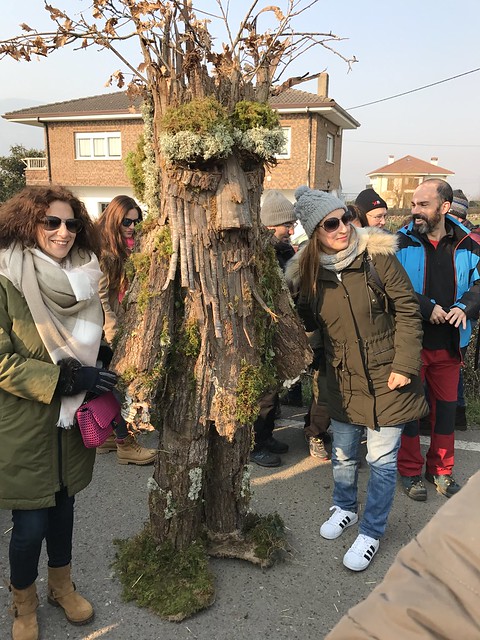 This guy was the coolest. Can't help but wonder how many I am Groot jokes are made around him. Probably disappointingly few. I had my photo taken with him, too, but somehow my wife put the camera in black-and-white mode when she took it. 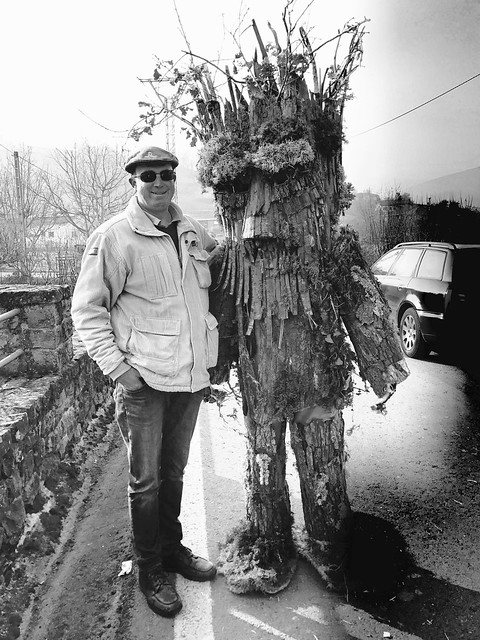 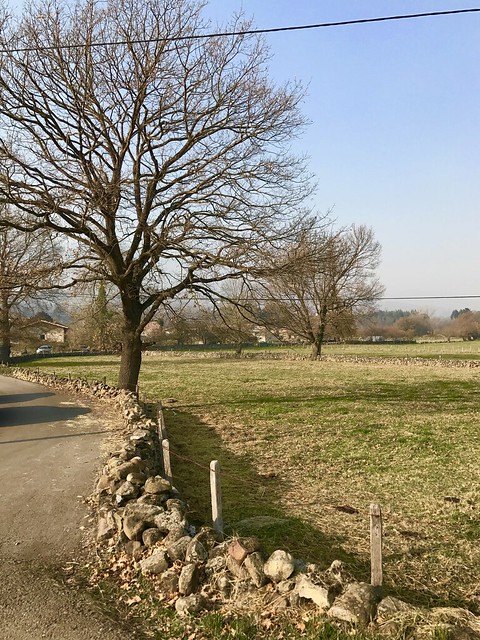 I do love little country backwaters like this. How amazing that this little festival that they have every year, and have been celebrating for millennia, can attract such attention.

If you are hungry for more photos, Flickr is full of them.

It was really loud, so turn up your volume to get the full experience.

I'm glad we went. It's an interesting thing to experience, and to have experienced, but I suspect we won't be returning. The 500€ prize for the best photograph meant that the place was crawling with DSLR-wielding contestants.

Thanks for the lovely day out, Silió and Puente Viesgo!