On the weekend of September 10 and 11, 2016, my wife and kids and sister-in-law drove five and a half hours south to a little mountain village called Gavilanes near Ávila. If someone told you to put a pin on a map in the dead center of the Iberian peninsula, not just Spain, you would probably skewer Gavilanes. Why did we choose this place? It is the home town of the husband, Óscar, of my wife and sister's second cousin, Lourdes. Óscar and Lourdes attended my wedding, and the second cousins recently reconnected and released how much they liked each other recently on a sisters' road trip to Madrid, where they live. Óscar and Lourdes brought their 11-year-old son, Daniel, who was great with our kids, and we all stayed in a house that belongs to Óscar's mother. It began in typical road trip fashion of everyone being really excited and then everyone but the poor driver dozing off before the end of the motorway onramp. We arrived at dusk on Friday, shortly before our companions who only had a short, but traffictastic, drive from Madrid. After a few welcome beers at a bar we would come to know well, we drove up to the house to settle in. Well, not all of us had cars that could get to it, so we had to park our car in town and load all of our stuff and kids into Óscar's Land Rover. I was thinking, "How bad can the road be?" Let's just say that there were some turns that were so hairpin that Óscar had to pull into the turn as if it were a parking spot and then go in reverse up the hill another fifty meters until the next hairpin turn, where he could switch to driving forward. I was impressed. 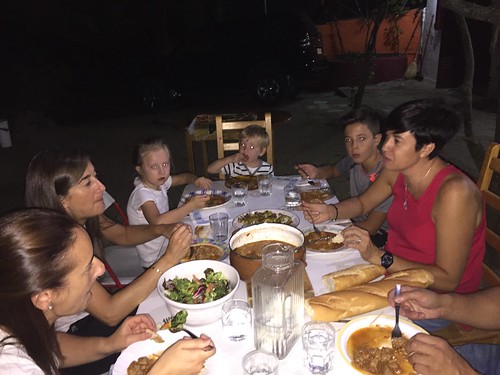 After a dinner of meat stew that my wife had prepared the day before, we made a valiant effort to walk down into town and go out for drinks, but the kids were falling asleep (it was 1:30am after the first week of school!) and the grownups didn't have much gas either, so we called it a night. 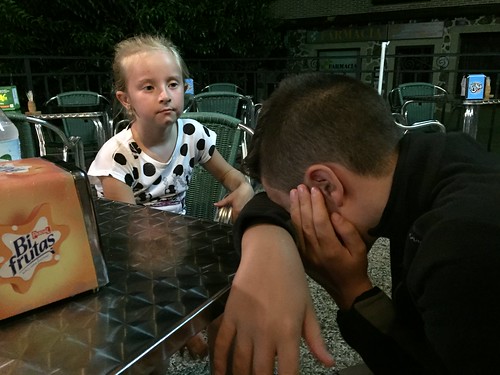 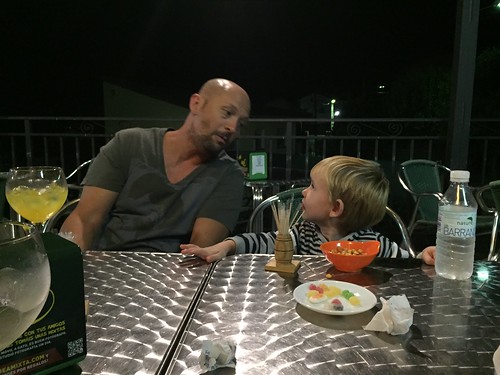 Ian was still fired up (he had slept for the five hour car trip) and immediately bonded with Óscar.

Saturday morning was gorgeous waking up in the rural mountains. They are in the process of adding another floor to the house, which is still far from complete. 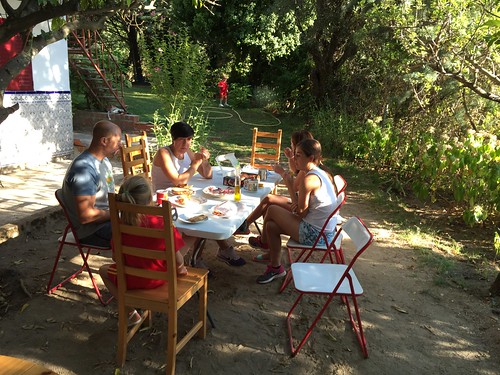 Breakfast outside is wonderful. 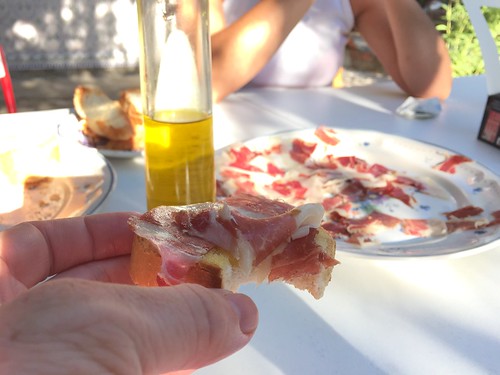 We had a full Spanish breakfast of cured ham and olive oil on toast. Mmmmm!!

Óscar is an avid outdoorsman and fit boxer, and he knows all the hiking trails in the area, so he chose one that a three year old could manage and we set off into the mountains. It was slow going, however, because there were wonderful ripe blackberries everywhere along the trail. At one point Ian said, "Give me more!" to which a grownup said, "But your hand is full of them!", garnering the retort, "Yes, but I have this other hand!" 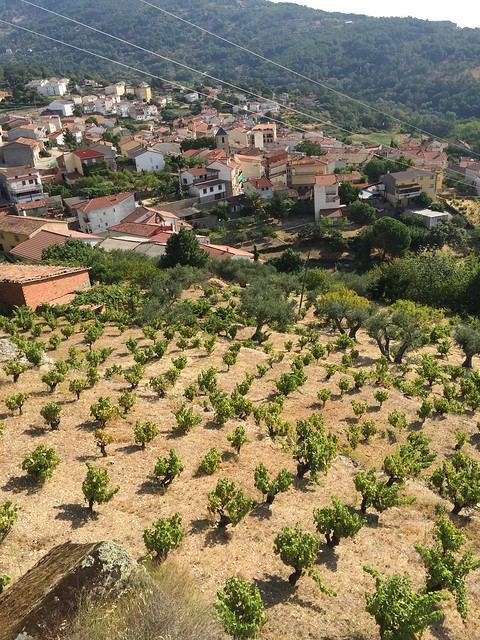 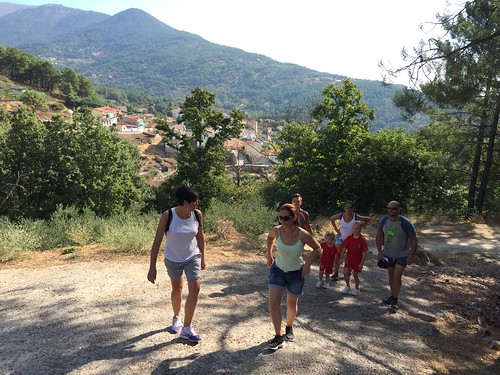 Hands full of berries, up the mountain we went. 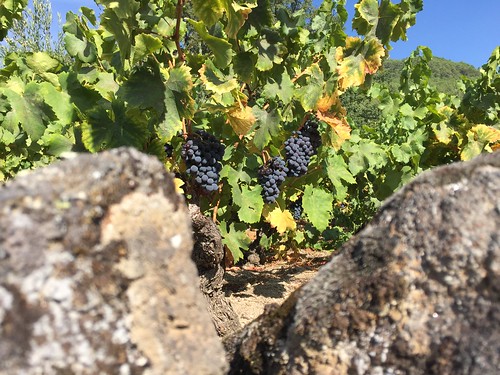 According to our guide, Óscar, the grapes in this region produce extremely alcoholic wine. 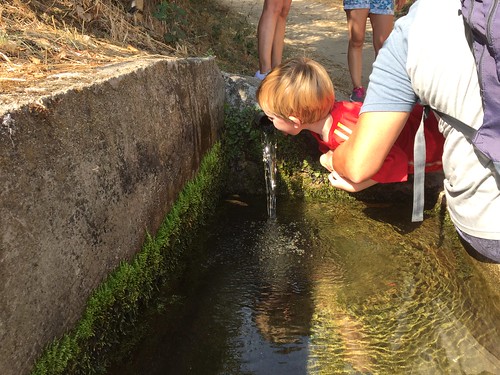 We stopped to drink at a mountain spring fountain. Óscar explained to us that during other parts of the year, there are dramatic waterfalls here, and we even saw one of the first hydroelectric plants in Spain. When electricity was being rolled out as a thing you could have in your home, the residents of Gavilanes got theirs for free. 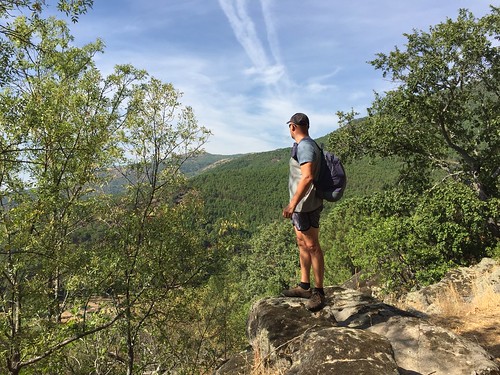 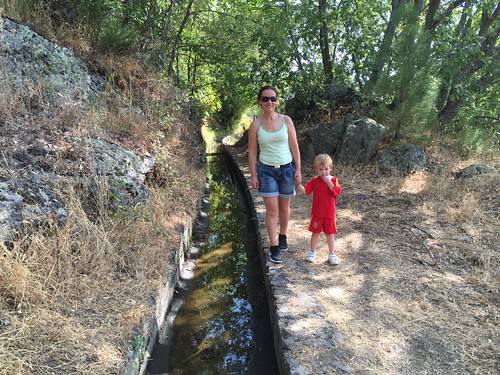 Much of our walk was along this irrigation canal... 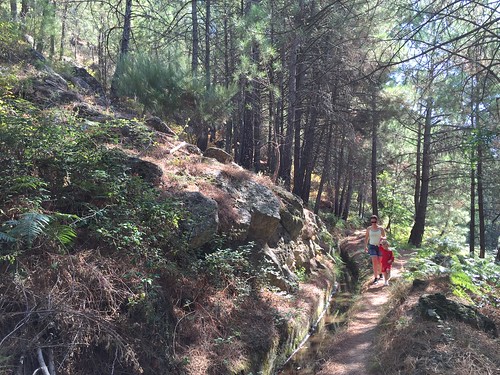 ...which meandered through the forest. 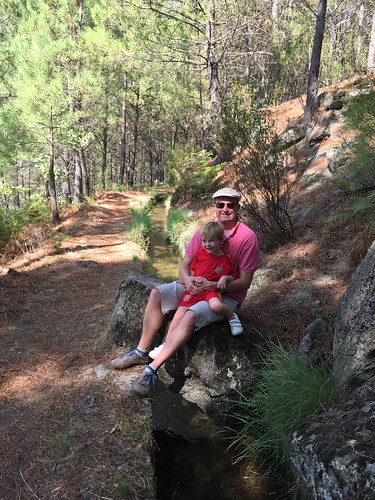 Father and son in the forest. 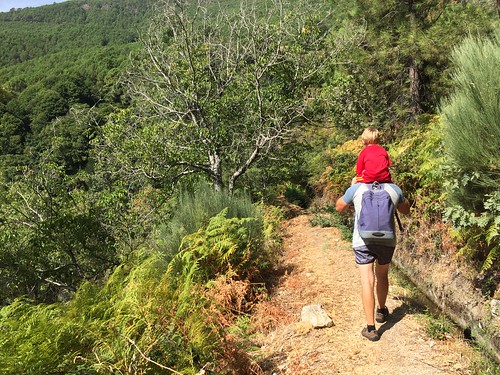 When Ian got tired, Óscar, who was already carrying our backpack, plopped him on his shoulders and continued on. 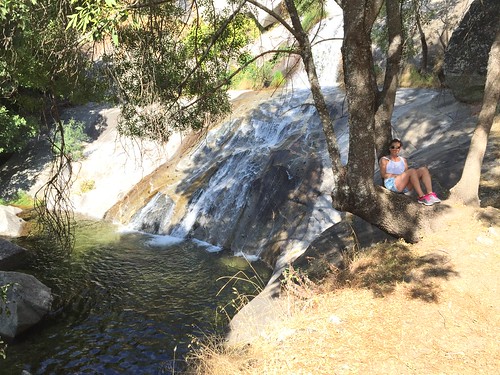 By the electric plant was this lovely waterfall. 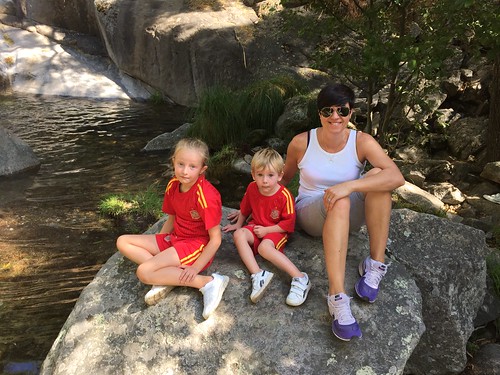 We continued on a little more and came to a deep rocky pool. The water was freezing. Unsurprisingly, Óscar leaped in first, I took the silver in bravery, followed by my sister-in-law and wife, the latter actually slipping on some moss and entering before she was ready, much to her horror. 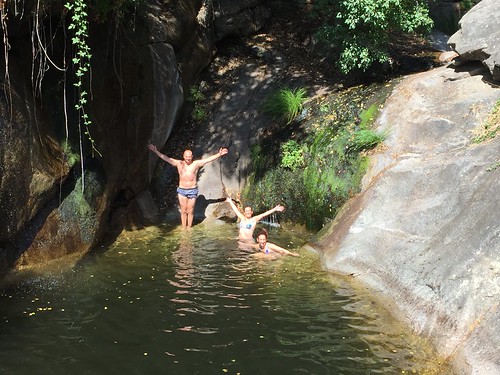 The water was so cold that I felt the need to hold my hands out of the water occasionally to let them warm up. Normally when you climb out of a body of water, it feels cold to be dripping wet in the air, but not with this water. 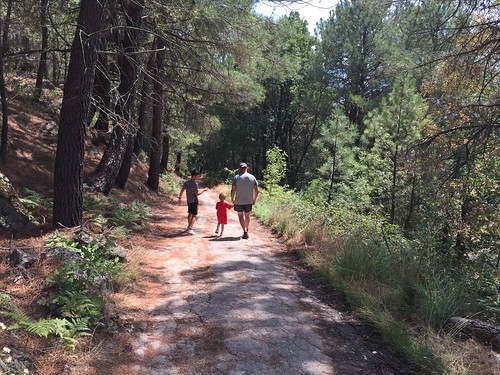 Finally, we headed back towards town. 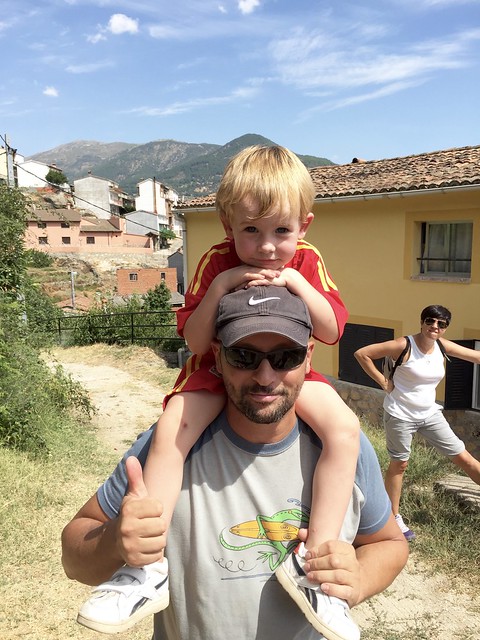 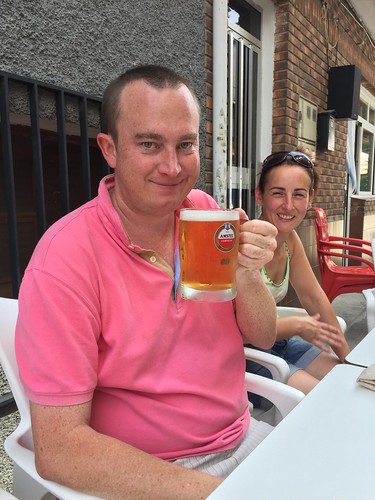 Ah, yes, the best part of the hike.

After several rounds of lager, we headed up to the house to eat garbanzo soup that my wife had prepared that morning. Just when my body was saying it was siesta o'clock, Óscar gave me one of these "now it's time for man things" look and said, "Let's go down to the bar to watch the fútbol!" I wasn't sure if he was kidding, but I soon found myself in an uncomfortably hot non-air-conditioned bar, gin and tonic in hand, watching Real Madrid destroy Osasuna, 5-2, in a very entertaining goal-laden game on a television that kept losing its digital signal. After the game finished, we took our third and fourth gin and tonics outside, where it was a bit cooler, with Óscar's friends who were a very entertaining bunch. 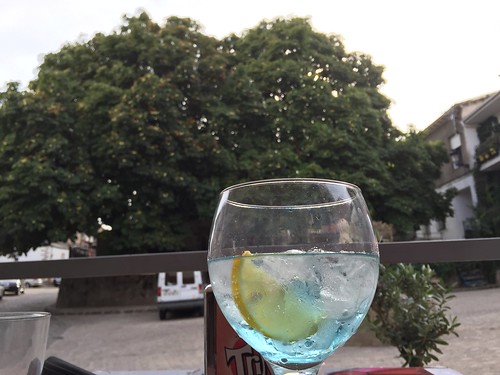 Eventually the well rested women and children found us and we went for a walk and started on the evening beers. Several times on this trip we experienced the sensation for the first time of not really knowing where our children were, just that they had gone off with some older kids, and trusting them all to be safe. Nora and Ian bonded very well with Daniel, and they even befriended some of the other daughters of Óscar's friends we were hanging out with. Ian is a master of getting older girls to do his bidding.

After the sun went down, we found a restaurant and had several dishes that the whole table shared. 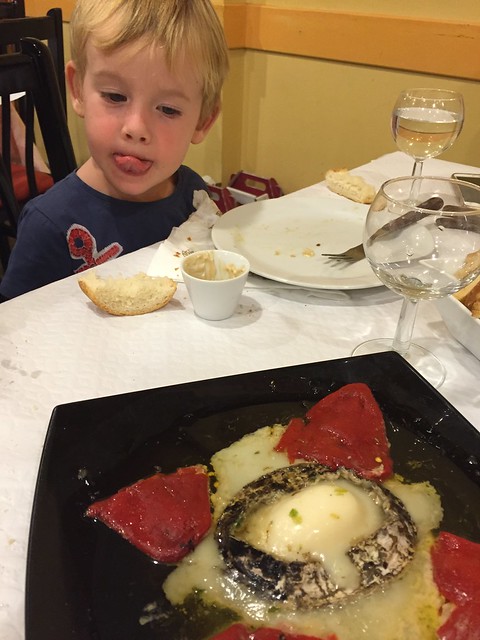 As the night progressed, the women cousins talked family gossip, and the kids and men ended up at the house of one of Óscar's friends, the kids kicking a ball around and snacking on potato chips, and the men sitting outside sipping their drink of preference, vodka and orange soda. When we all finally walked up to the house to crash, it was around 5am.

At 11am, I was awoken by my wife telling me that she and Lourdes were going for a hike, that the other two adults had left for a difficult mountain hike at 8:30am, and that I was in charge of the kids.

I figured out how the coffee maker worked, and the older two kids got up around noon, and I prepared their breakfast. At 1:30pm, I got a text saying that we should all come down to the bar where everyone else was enjoying their post hike beers. Ian was still dead to the world, but he came to as I was dressing him. The kids and I walked down to town. 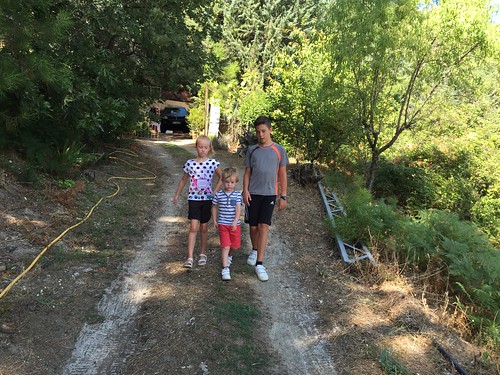 A rare moment when Ian was not holding Daniel's hand. 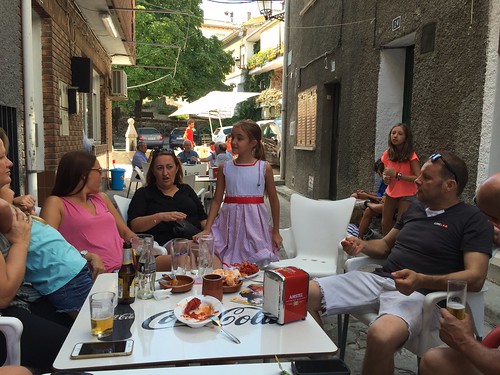 We found the group enjoying themselves with beers and bright red crawdads (or whatever the species of river crab is in Spain).

Soon it was time to say our adios's to Óscar's friends and their families and head up to the house for lunch, leftovers of garbanzos and stew. Then we packed up, tried to leave the house as clean or cleaner than we found it, and Óscar drove our luggage down to where our car was parked. We promised to do this again some time, and we parted ways.

Upon arriving home, I realized that I had all these photos of a great weekend which look so much like the photos that Apple uses when demoing their consumer video-making apps, so I made a little slideshow. One funny anecdote to make the video make sense is that we tried to teach Ian how to say "Gavilanes", but he would always say "Galivanes". Over the course of the weekend, we played with that so much that we started saying it wrong ourselves. So before I made the video, I recorded Ian saying it wrong. If for nothing else, watch it for the slow-mo dive footage at 2:03.