On Saturday, we made our annual family trek to the American Homeland to visit the family. The children behaved absolutely admirably, with Nora, having just finished first grade (actually we took her out two weeks early), taking the gold medal by entertaining herself completely with the in-flight entertainment and later some iPad games. Ian was a little more of a handful, raising and lowering his tray table roughly one million times in the nine hour flight. Luckily the seat in front of him was unoccupied. 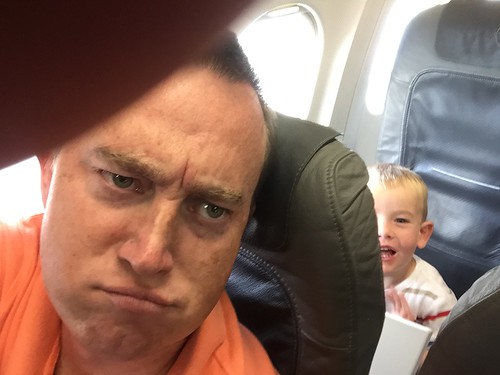 It was occupied by me on the short flight, though.

Upon arriving in Charlotte, we had to wait until everyone got off the plane before our travel stroller was given to us from the cargo hold. We barely used it in the Munich Airport, and this will be the last time we travel with it. This waiting put us at the very end of the immigration queue. As we have learned from past experience, we all four have to go through the "Foreigners" immigration line. Our immigration officer was in good spirits and we had no problems whatsoever.

The wait through immigration, as usual, meant that we arrived long after our luggage to the baggage claim, so we immediately grabbed our bags and loaded them onto an airport luggage cart. Like some shopping carts, the luggage cart had a little tray by the handle in which I placed my little wallet that I carry our boarding passes and passports in. When we travel as a family, I am generally the person in charge of handling all the passports, and I am usually quite good at it.

The last step was the pass customs, where we told them that we had no food, which was true this time, for once, and we were out into the public area. I attached to the free airport wifi and Facetime-audio called my mother who was waiting in the cell phone parking lot. After a short wait on the curb, my mother drove up in her minivan, and I loaded the suitcases into the van, returned the baggage cart to the baggage cart return place, and went to find my family, who had taken refuge inside from the extreme North Carolina heat and humidity.

It wasn't until we got all the way home, a 70-minute drive away, that I realized that I had left the passport wallet, with all of our passports in the tray of the luggage cart. Oh no!

I immediately called the airport and spoke to a gentleman named Randolph, who tried his best to be helpful, but he was really only running searches on some database to see if someone had turned in anything that was marked with my name.

I called several times on Sunday, but only got answering machines saying that their business hours were Monday-Friday, 8am-4pm. I called many, many numbers for different branches of the Charlotte airport, all of which were in the form 704-359-XXXX. 359 corresponding to the letters "FLY" on the phone keypad. I wonder if all airports have those numbers.

The other thing I had to wait until Monday morning for was to call the Spanish Consulate and US Passport Office to inquire about strategies to get new ones to let us leave the country at our scheduled time in two weeks.

On Monday morning at 8am sharp, I started calling the Charlotte Airport Lost and Found office. About fifty calls later, I realized that they never ever answer the phone. You must leave a voice message if you want to be attended to. And they assure you that you will only be contacted if they have found your item. Via the website, I also obtained an email address, so I sent a detailed email outlining the contents and dimensions of the missing wallet.

Later, I found a different email address, and that one went through.

I called the Spanish Consulate in Washington, D.C., the office that services requests from North Carolina. I spoke to a helpful Spanish gentleman who explained that my wife would have to show up Monday-Thursday, from 9am to 1pm, with no appointment, and some documentation related to her identity (this was not an issue because she had her National ID card), and she could have a new passport issued to her on the spot.

The American side was not as helpful. First they told me that it was absolutely imperative that I must report my lost passport immediately, and that as soon as I did, if I later found it, it would be worthless. So I made sure not to give my name at all, but inquired about, hypothetically, what would the procedure be? There were three forms I would have to fill out, and I would need my original birth certificate (which is in my house in Spain). I said that I didn't have my birth certificate, nor that of my children, on me, and the lady said that I would need to contact the municipality of my birth and get them to issue me a fresh one, and then I would have to show up in person in the Washington, D.C., office to turn in all the documentation, and then maybe they would get back to me with a provisional passport within a few days. Oh, and it would be $195 each.

My mind began contemplating the family road trip to the nation's capital, considering how many nights we'd have to stay in a hotel, and how we would have to wait until we had the documents for certain before booking a fresh flight home. I was feeling horrible.

They had our passports!!!

I dropped everything and drove to the airport to pick them up. "I wonder if they will need me to show some photo ID?", I quipped before leaving. That would be rich, wouldn't it?

But they didn't; I just had to sign something saying that I picked up the documents. 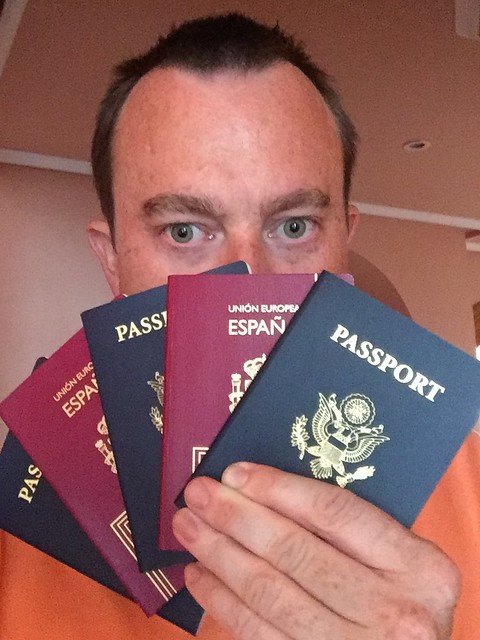