Starting about two weeks ago, shortly after his third birthday, coinciding with a nasty bout of gastroenteritis, Ian's eyes starting itching, particularly his right eye. He was rubbing the heck out of them. It got really bad this weekend, to the point where one of them got hugely swollen, almost swollen shut. On Sunday we took him to the ER and they gave us two bottles of eye drops, one was an antibiotic in case the swelling was from an infection, and the other was an antihistamine in case the cause was allergy. He hated having them applied, but they did the job. 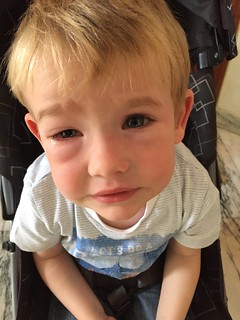 Yesterday, he was pretty bad in the morning (I literally had to hold him like a straitjacket to keep him from scratching), but the drops turned him into a happy boy who was begging to go to daycare, but we didn't let him because the ER doc said that his eye thing might be contagious – of course when Nora heard this her eye immediately began to itch. Then he crashed for a four hour nap in the afternoon, and when he woke up, he was bad again. This time we only gave him the antihistamine drops, and it cleared up again. Although he was so well rested that he went to bed around midnight.

This morning, I took him to the doctor and told her that we were certain it was allergies. I woke him up just enough to dress him, and he fell back asleep on the way to the doctor. The doctor agreed to do a blood test for allergies, and he barely woke up as they pricked his finger and squeezed out a vial of blood.

During the 20 minutes we had to wait for the results, he did wake up, but he was crying and needed to be held. I sang him some songs until he was laughing. His new favorite thing is to sing The Itsy Bitsy Spider, but swap things around, e.g.

UP comes the rain,

and washes the spider IN,

DOWN came the sun,

and made everything WET

Cracks him right up.

He asked to do pee-pee, and I took him to the bathroom, but he refused to open his eyes. About then the 20 minutes was up, so I took him back to the doc, and she tenderly washed his eyes with saline. He was in a good mood throughout the procedure, just refusing to open his eyes "because it itches!" Eventually he opened his eyes, and we gave him some of the antihistamine drops, and within two minutes, he was happy again. The doc confirmed from the tests that, yes, he is allergic to pollen, and that every spring for the rest of his life is going to suck a little bit. 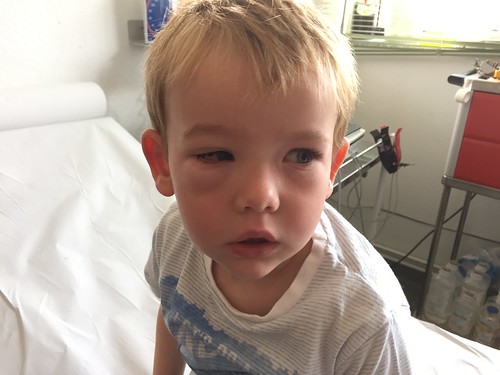 There is no cure, but the treatments are relatively effective.

He was happy to get to go back to daycare.