Today, after I dropped my daughter off at her French class, I went for a little walk. As I was strolling down the street, I walked by this shop. Perhaps, had I not been an American, I might not have stopped dead in my tracks, but I did. I evaluated the "Armament" flag in the window and began wondering if I hadn't stumbled on the local ISIS Я Us recruitment center. 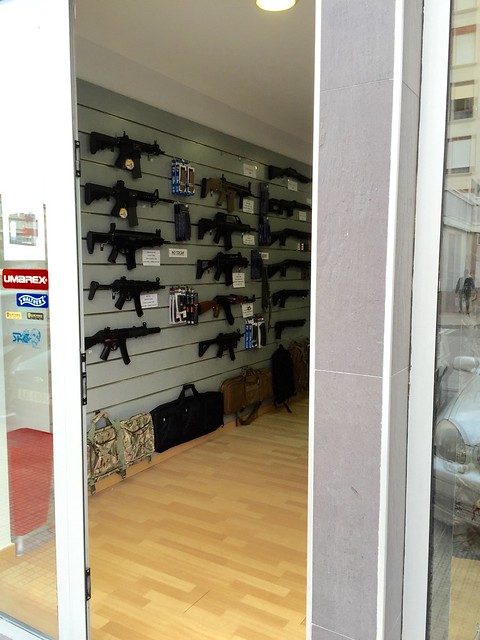 I continued on my walk, listening to S02E02 of Serial, about a US military deserter in Afghanistan, and I contemplated whether or not entering said store to honestly inquire about Spanish gun laws, which my American peeps quiz me about all the time and I am no expert in, in disbelief that such a store could even exist.

Had I taken a moment to think critically about the branding on the outside of the shop, I think I could have figured out the mystery. 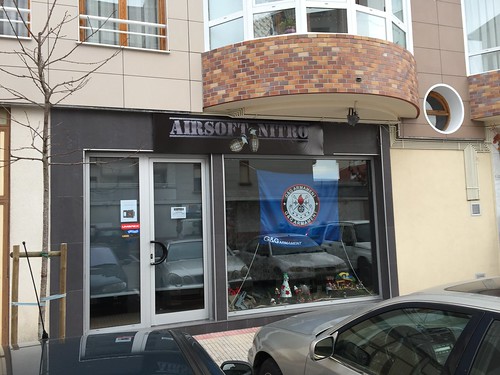 I won't lie, though. Silly-in-retrospect questions about how admitting my nationality, to whomever was dealing in such weapons, might put me or my family at risk did cross my mind. Eventually, curiosity made me circle back around, only to find the store closed. As I was examining the window, full of bullets and magazines (of bullets), I heard voices from inside, and then the owners of the store came out.

After coming up with some comment about "WTF is this?", the guy explained that they sold guns that shot bolas, not balas, such a small, but important difference in Spanish ("balls", not "bullets").

Aha! Of course, they are "play" guns. This shouldn't surprise any of us, but apparently this is a pretty big subculture and hobby group on the internet. Just another thing that I love about the internet; it brings people of common interest together who would normally never find each other. Still, I wonder if such a small town could support such a store.

I'm more amused by my culturally innate skittish reaction to such a place than by anything else.