State of the Offspring Address - November 2015

Our November was primarily dominated by the run up to and execution of a whole-family trip to the United States to visit my family for Thanksgiving. However, plenty of other things happened first, so let's get to those. On November 1st, All Saints Day, we took a lovely long walk on a nearby beach (we actually walked there from home) at Golden Hour. 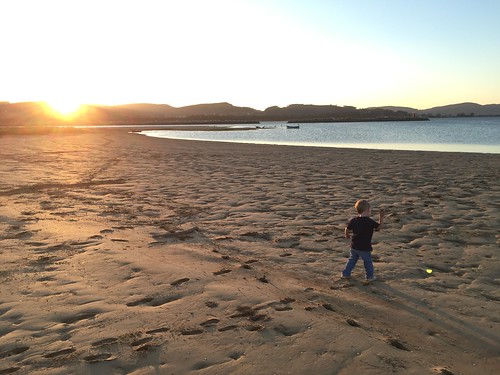 Ian, doing his favorite activity in the world: throwing rocks. 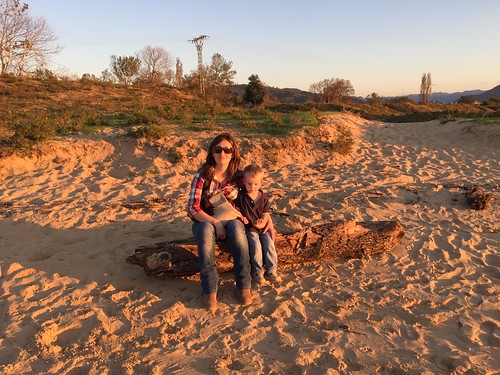 Out at dusk in short sleeves in November, with Tía Belén.

Ian continues to impress the heck out of me – perhaps I'm biased – with his soccer skills. When he's got the time to set up a kick, he favors his left foot, but if the ball is coming to his right, he doesn't hesitate to kick it with his right foot. He's quite accurate, even when the ball is moving as he kicks it. He's already improved greatly since this video was recorded on November 7, 2015.

One day this month when I was dressing Ian, I asked him some question, maybe "Who wants to go to the park?" and he kept saying, "I do, I do!" Even after the subject had changed, so I had the idea to record him saying that as if he was getting married, you know, potential video to play embarrassingly at his wedding...

And then there was some more morning dressing shenanigans. He can be so expressive, even if all his words can't be understood.

Sometimes I like to reflect on what parts of my daily routines I will miss in the future, and then record them for my future self to reminisce about. This video is a very common example of Ian and myself walking home after dropping Nora off at school. If that little toy car had an odometer, it would have dozens of kilometers on it.

Nora's mouth is a mess. I took her to the dentist on November 11, and the dentist identified, and showed me with the little mirror, that two of Nora's molars (baby teeth, luckily) were completely rotten and needed to be pulled. While we were there, the dentist noticed a rotten incisor that was already pretty wobbly, ready to fall out, and decided to go ahead an pull it. In retrospect, it turned out to be a great practice run for the molars. We convinced the dentist to let us wait until after we returned from the States to pull the molars. 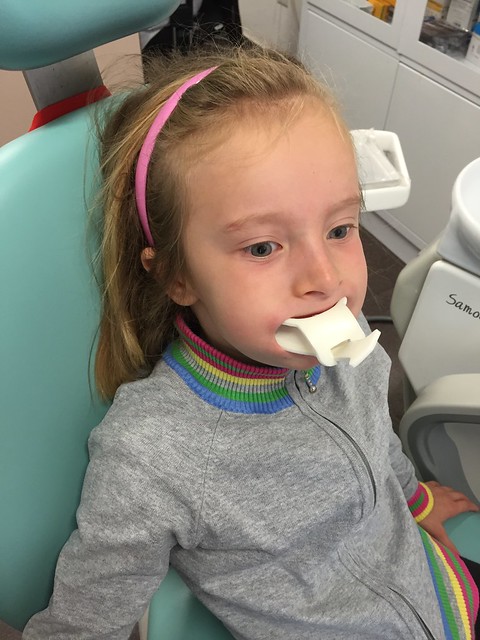 Who doesn't remember those faux-strawberry fluoride gels you have to sit awkwardly with? Ugh!

We are fully into the "get together with all the classmates for every birthday" tradition. Nora used to hate going to these things, but she has come around now. She doesn't mind missing one if we have other plans, but she doesn't immediately refuse if we don't.

A lot of being a parent is telling your kids what to do and what not to do, nudging your kids, like a hockey stick pushing and blocking a sliding puck. When you spend all day every day doing this, you can get the sensation that your kids are constantly doing what they are not supposed to, because you feel every time they bump against your ruleset. It feels like not a meal goes by where the inappropriateness of spoon throwing doesn't come up.

Well, it was very eye opening to experience what other six-year-olds are like. Granted many of them were boys, which is still sort of a different species, and there was some mob mentality in play, but they were pushing and shoving and punching and throwing and generally being monsters, and their parents, when they did raise an objection, were immediately ignored. Amidst the chaos, my children seemed like absolute angels.

I'll have to check back in four years to see what a monster my six-year-old son has turned out to be. 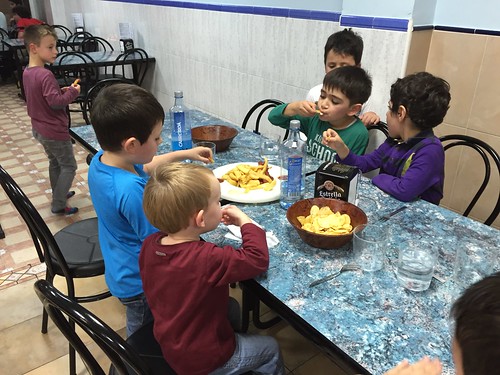 Ian totally held his own with the six-year-old boys. In the giant bouncy play area, they were also pretty courteous to stop pummeling each other when Ian came around to avoid accidentally elbowing him in the face. 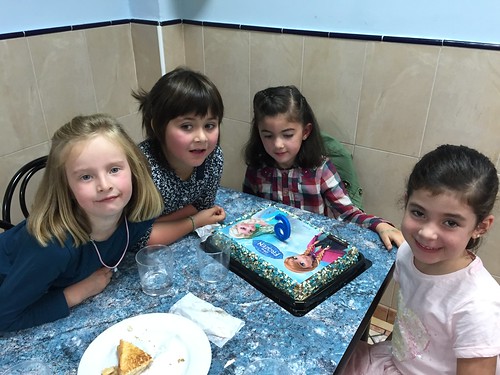 The girl side of the table. 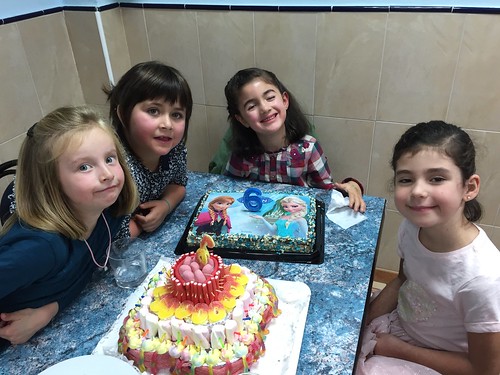 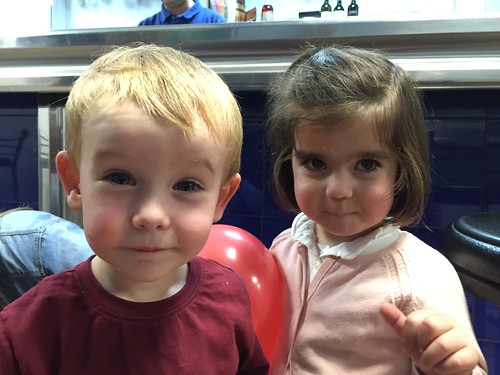 Ian and his friend, Mara. Siblings of the two girls on the sides of the previous photo.

Nora finally began her violin lessons. She goes for thirty minutes twice a week to a municipal building where a strict British woman teaches her and five other kids, some older, some younger. It took them several weeks of learning to hold the bow before they were ever allowed to pick up the violin. The parents have to sit through the entire class so that they know what to make the kids practice at home. The teacher demands that the students practice for at least ten minutes every day, and she makes the parent keep a log of each practice session.

The great part of the class is that each student is given a municipal violin to practice on. 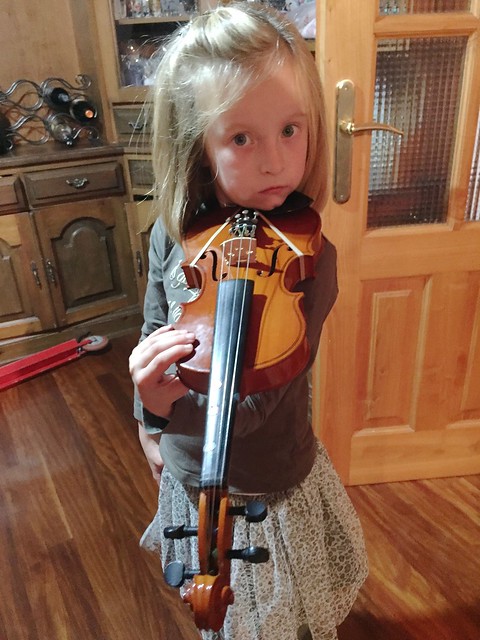 It's hard to judge, of course, but so far Nora says that she likes the class. She doesn't hate it, but she is reluctant (as every child is) to stop what she's doing to practice each night. Nobody likes instrument practice. 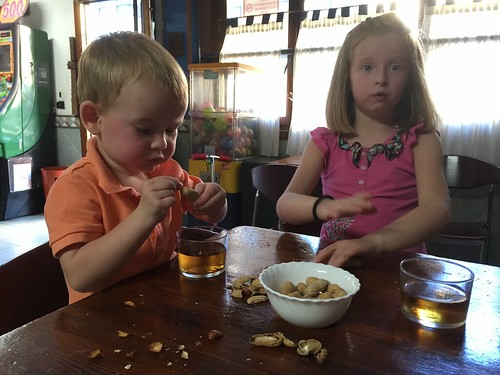 Eating peanuts at the closest bar to our house is always a fun pastime. 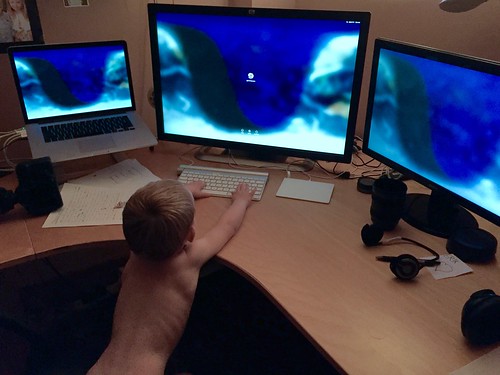 One day I caught this Naked Hacker trying to work out my password at my desk.

Due to the immensity of information, I've decided to put our Thanksgiving trip, which spanned the end of November and the beginning of December into its own post. Even when bored in the Munich International Airport...

...the state of the offspring is strong! 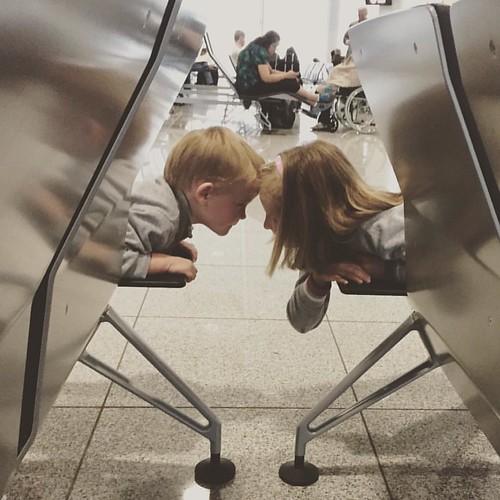