State of the Offspring Address - October 2015

The Raslets made some good progress in October. The biggest event was Nora starting French lessons. We had been searching around for a potential French teacher for some time. Pretty much the only language that anyone is interested in teaching children in Spain is English; all the French classes are for older people. Someone directed us to a woman who lives in the building adjacent to us who was going to give French classes to students at a local school, but, as is often the case in public education, the funding dried up at the last minute and she ended up not doing it. I spoke to her, and she said, "Hmm, well, I'd need to brush up on my textbooks from school, but I could probably teach some basics to a six-year-old." Not quite what I wanted to hear. Later, someone else tipped us off to another potential teacher, and my wife called and set up a class schedule. Nora goes for one hour during her two hour lunch break from school, which really tightens what is normally a very loose time period of her day. It also means that I take her to class.

After our experiences with Dance class and Skating class, I was pretty terrified about whether or not Nora would accept being left alone with a teacher for an hour. On the first day, we met at the designated place, which happened to be right in front of the teacher's house, and we were both invited in. The teacher, Natalie, is Belgian, so she's a native French speaker, and she is absolutely perfect. Nora responds really well to one-on-one communication where the other person is talkative and attentive and focused on Nora, and Natalie is all of those things. They do a lot of coloring and drawing of things, and Natalie does a great job of interjecting some French among the mostly Spanish she speaks with Nora. I stayed for about ten minutes of the first day, but then slipped out of the house with neither of them noticing. The second day, I came up for about a minute, and with each subsequent class, I don't even go up to Natalie's house. Nora loves French class. She is constantly talking about what she's learning and about what she hopes to learn there. It has been a resounding success. Compared to other extracurricular activities, it's somewhat expensive, but of course it is, since it's literally an hour of someone's attention.

Starting in November, Nora will be taking... violin lessons!!

Ian is slowly but surely picking up this whole speech thing. Several times a day, he will say something to us, which we cannot parse. We guess what he's saying, and he will say, "No, blah blah blah" and repeat what he said before. If you repeat exactly the sounds he made, he will also tell you that you got it wrong. It can be very frustrating for all parties, but it's very rewarding when you finally guess what he's saying.

He doesn't get asked his name in English very much.

A visit to Bilbao

Also, this month, we paid a visit to our friends, whom we met through this very blog, in Bilbao, Bnanno and Qpatez, for some lovely Indian food. Actually getting there was a bit of a disaster, because Google Maps sent us on a very awkward route, and Ian puked twice on the way there, causing me to get out of the car with Ian to walk the rest of the way. Google Maps said it was only a 7 minute walk from where we got out, but then it was suggesting that I walk, with my child, along a busy motorway, for a long time. In the end, Qpatez was sent out to rescue us. Eventually we got there and had a wonderful spread of lamb and other Indian delicacies. 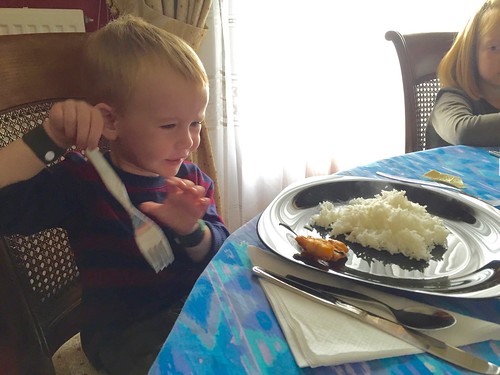 Rice eater. Ian didn't eat much, but he had been puking only hours earlier, so perhaps he wasn't too hungry. 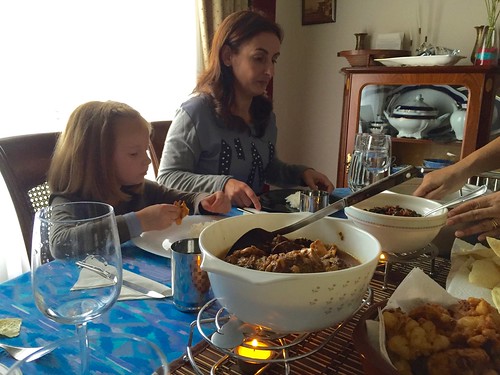 Nora very much enjoyed the food. 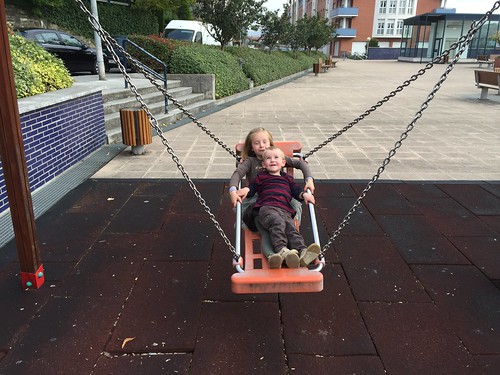 After lunch trip to the park.

The kids spent two weekends this month with their Spanish grandparents. There was one memorable incident in which no one could find Ian in their house. The kids' Aunt Belén discovered that the apartment door was ajar and ran down the five flights of steps (there is no lift) to discover Ian was down in the lobby crouched under the stairwell. When he saw her, he put his finger to his lips to signal that she should be quiet, as if he was hunting wascawy wabbits in his imagination.

We had our annual Halloween party, but it wasn't quite as fun as past years. What we did do, however, was all dress up for the Halloween parade around town, which is an evening where participating vendors will give out candy to costumed kids. The real fun was going to a Halloween party hosted by some parents from Nora's class in their lovely mountain bungalow. They really went all out with costumed mannequins and styrofoam gravestones, and several large pumpkins, one of which I was asked to carve in a live performance.

Our pumpkins. Designs drawn by Nora and her friend, Carmen, and carved by my wife and me. 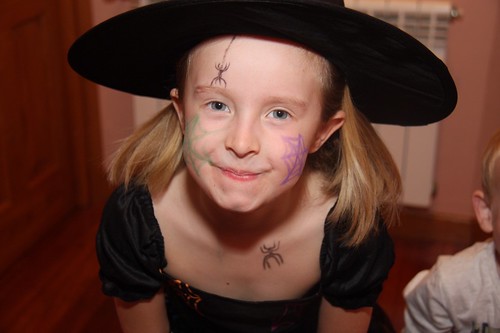 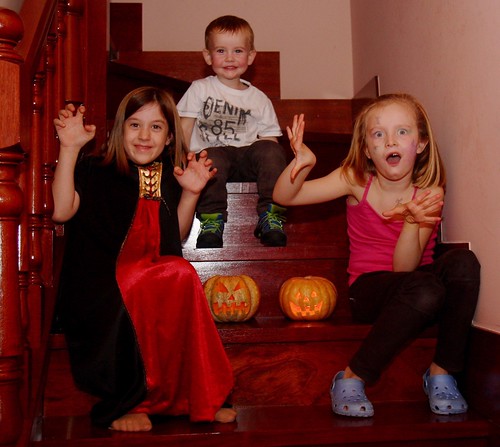 Witches and pumpkins and little brothers, oh my! 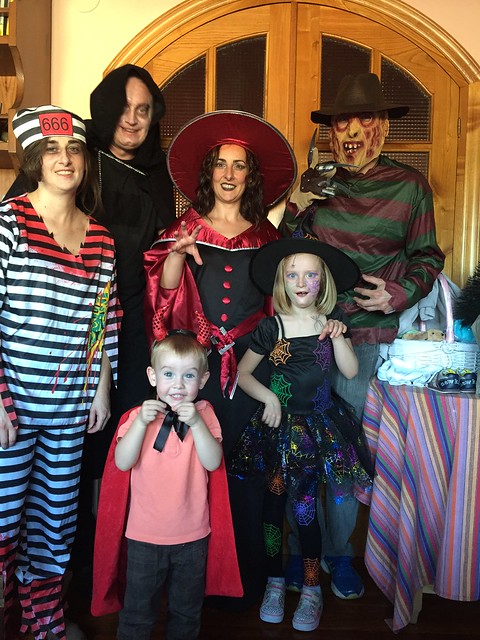 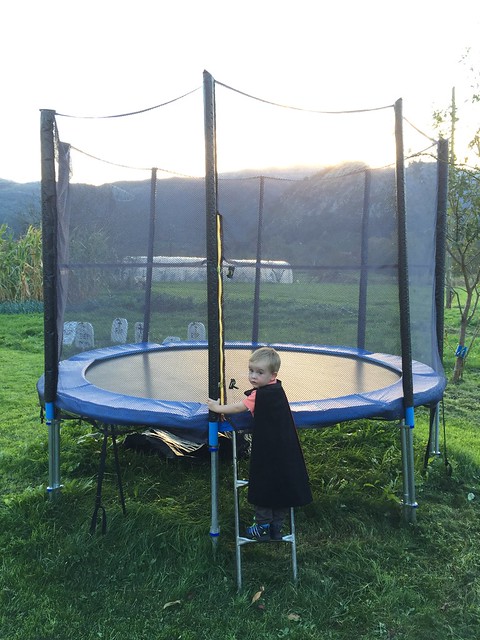 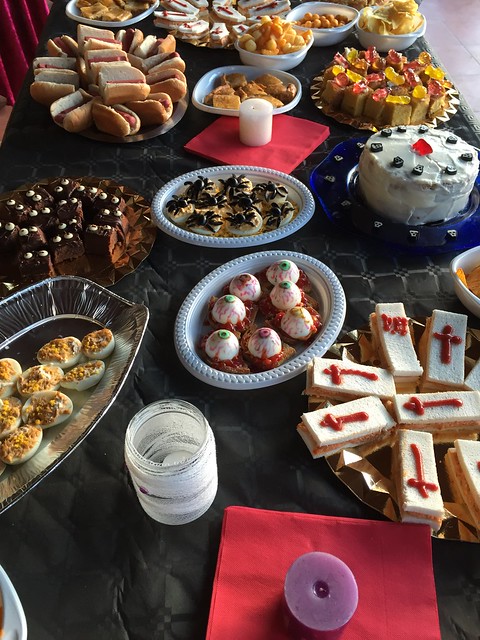 They put a lot of work into the snack spread at this party. 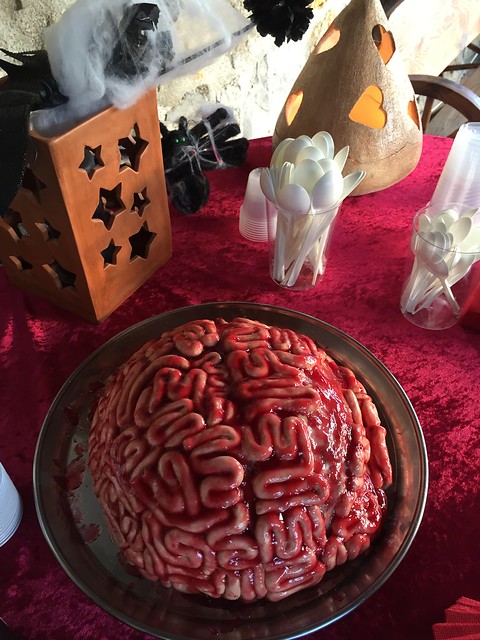 The brain cake was the most impressive, in my opinion. 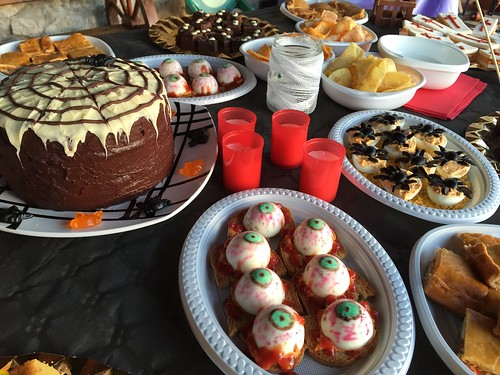 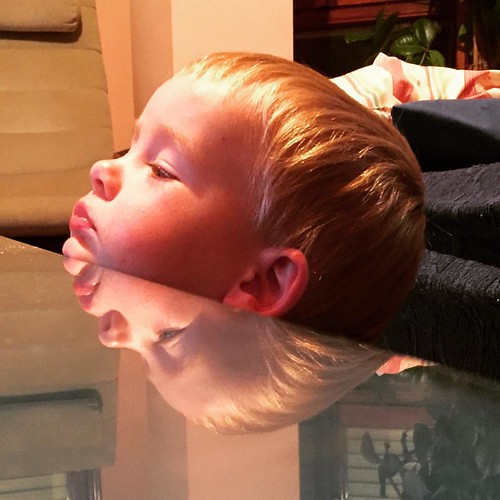 Ian finds some weird postures in which to watch Dora the Explorer. 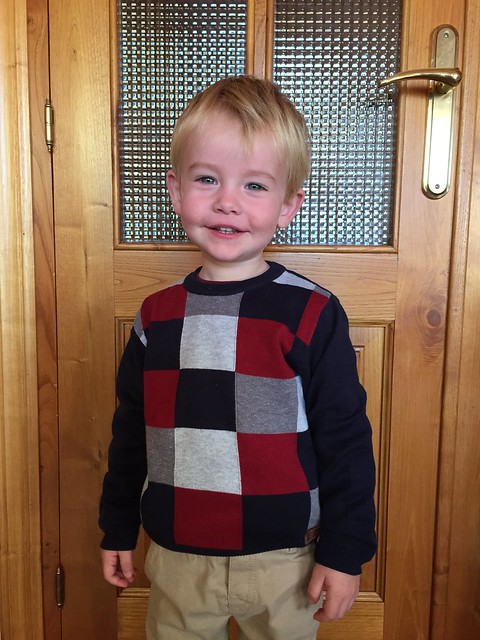 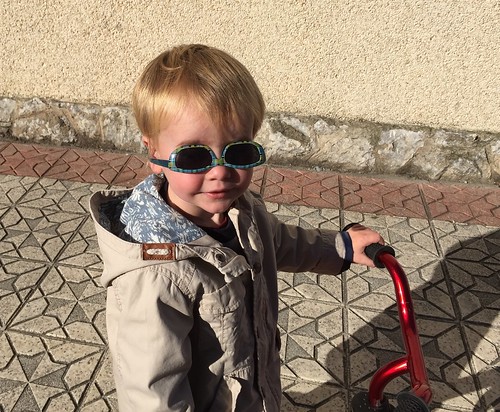 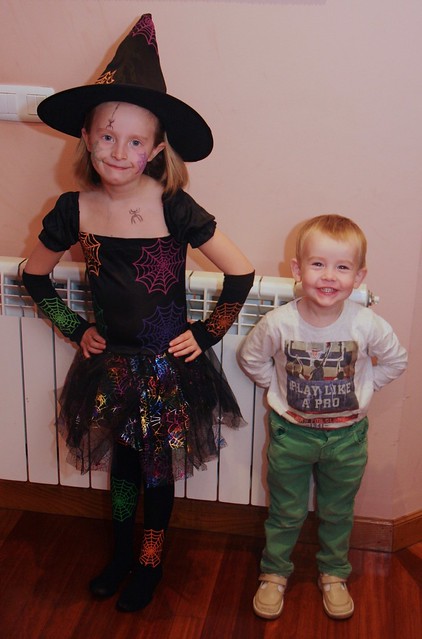