State of the Offspring Address - September 2015

September was a good month, but not nearly as milestone-laden as August. The highlight of the month was the visit from my parents, which greatly boosted Ian's English. The biggest steady improvement over the month was Ian's language and potty skills. The other major event was Nora starting her scholastic career in first grade.

We were getting pretty desperate around the beginning of September, just about ready to throw in the moist towelette and go back to using a diaper, but then there was one day 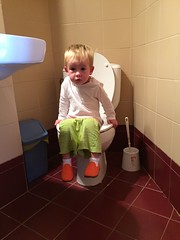 when he actually said, "Pee pee!" in time for us to shuttle him towards the bathroom, and there was also some success on the following day. By the end of the month, there was one time when he put down his metaphorical toddler crack pipe, a.k.a. Dora The Explorer, walked to the bathroom, turned on the bathroom light, pulled down his pants, climbed up on the toilet, urinated, got back down, pulled up his pants, and turned off the light. I was observing this discreetly from a distance. I vociferously congratulated him, and we even called his mother to tell her.

I used to think that parents being so excited about their child "doing pee-pee in the potty" was a bit of an act to encourage the child, but I can assure you that, after glimpsing the light at the end of the diaper tunnel, our praise and excitement is 100% genuine and passionate. Please, oh, please, let him master this skill!

School has begun again, and Nora seems to really enjoy her first grade class. It's all the same kids, minus one with developmental problems, plus two new ones, as her preschool class, and a new teacher, who she seems to really like. Of course we're delighted for her. They have yet to actually do much with the expensive books, but time will tell. As usual, the first couple weeks are all about trying to get back up to the level you left off before the summer break. 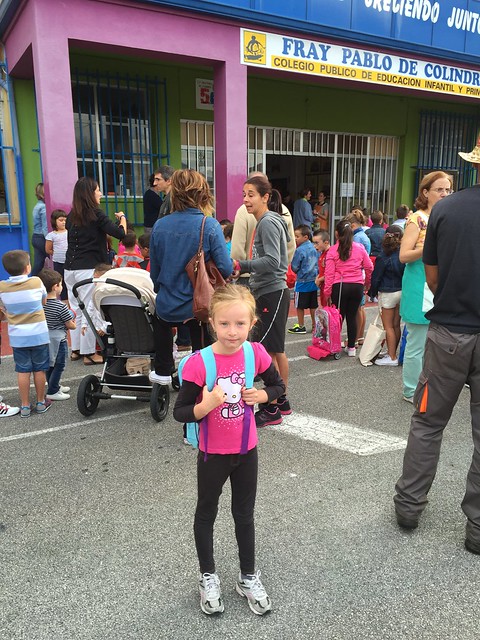 Nora's first day of school on September 10th. We soon learned that she doesn't really need the backpack, as all of her books just stay at school.

Ian is at Peak Dora, never tiring of watching the little hispanic girl and her monkey tread the same terrain over and over again. More so than his sister ever did, Ian likes to respond when Dora asks her obvious questions. His favorite episodes are those in which Dora's cousin, Diego, makes an appearance.

I recently installed a Plex app on the family iPad, which can stream some tv episodes from my NAS, a box of hard drives that serves as our domestic data warehouse. I showed Nora how to use it, and the next day, I watched as Ian picked up the iPad, scrolled to the right page of icons, opened Plex, drilled down to the "TV Shows" menu, selected Dora, picked an episode, and hit play. It was just like the story my father tells of me.

Ever since then, I have to be careful to locate all the screens when instituting a "No TV" time, because otherwise the kids will shrug and go find an iPad.

A step towards womanhood 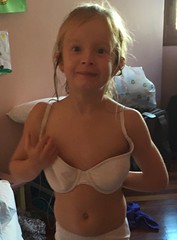 This month, Nora took a step towards maturity that I assume all little girls take at about her age, when she found one of her mother's bras in the laundry and attempted to put it on. It took her some work to figure out how all the straps should go.

She then proceeded to prance around as any six year old with a bra on would do. As I think is healthy, she has no sense of shame or privacy about her body yet. Although she does prefer the common courtesy of being left alone in the bathroom for certain activities. Even Ian has picked up on this and will often instruct everyone to leave the bathroom and close the door when he's doing his potty work.

One weekend this month, we went back to the Karpin zoo and dinosaur park. The kids only semi-patiently waited until we had walked around and seen some animals before getting what they really wanted: to go down the big slide. Actually, there are two slides, one big and one smaller. Nora has finally gotten up the courage to go down the little one by herself, but the two times she's gone down the big one with a parent, she has really disliked it. It's a little too long and scary for her tastes, I think.

Ian, on the other hand, is utterly bored by the little slide, and demands to exclusively go down the big one. I'm not sure if he would, but the posted rules say that a kid his age needs to be accompanied down the slide. So his mother and I took many trips down the slide. I recorded one of mine.

With Nora starting first grade, we had to choose whether to send her to Religion or Ethics. I was surprised that they even gave us a choice. Since we are providing pretty much zero religious instruction at home, yet probably plenty of whatever they talk about in Ethics class, we figured she should take Religion. Of course, Religion = Catholicism, in this case, I'm pretty sure. If they taught her about other religions, I'd be surprised. Being an educated Westerner means knowing the stories in the Bible. It was interesting talking to her after her first couple of Religion classes.

In one class, they were given a list of various items and asked if they were manmade or "god-made". Examples included, a house, the plants and animals, a pencil, and lunch. Kind of an interesting exercise. It should not have surprised me, given her affinity for a good narrative, but one day she told me the story of Adam and Eve, and basically hit all the major plot points.

During the local Carlos V festival in Laredo, both kids got to ride on a donkey and a pony. Nora was a little unsure of the whole thing, but was pleased afterwards to have done it, but Ian loved every minute of it. Later that night, he uttered some words during his sleep that gave away the equestrian nature of his dreams. 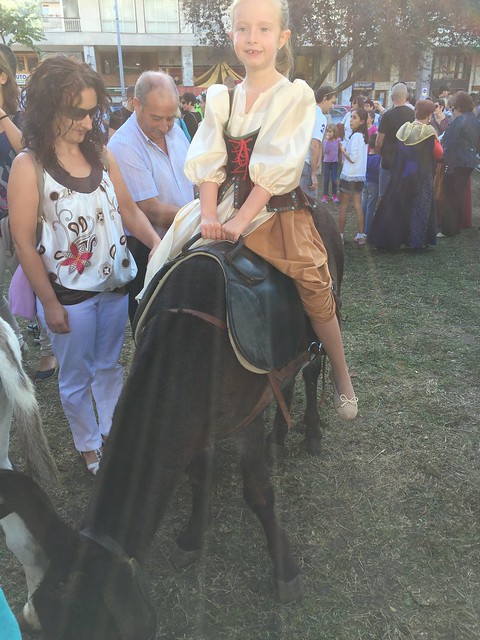 For the Carlos V festival, many people, especially the children, dress in old peasantwear (should be a word).

The donkey ride was lead by a vendor and the donkeys were all tied together, but later that day, they did a pony ride, and for that, they let us take one of the ponies, so we took the longest possible route around the perimeter of the park.

It was totally worth the 3€ for the five minute ride to see the joy on his face. 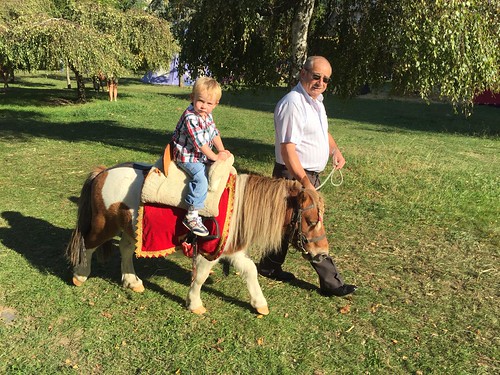 Nora, in her dress.

Ian is definitely going through a rebellious phase, in which a parent telling him not to do something actually increases the chance that he will do it. We had one incident that a less critically thinking person might attribute some significance to, in which Ian was throwing a stuffed animal as high as he could into the air, and I said, "Ian, stop that! If you keep throwing that, you're going to knock down one of those photos!" Then, without really aiming for the named target, he threw the animal, and sure enough, it hit a photo frame sitting atop our living room bookcase, and it fell to the ground and shattered. It's amazing that he has not put a fork through the television screen yet.

Here is Ian being a prototypical two year old boy, experimenting with the world in a way that any parent thinking of what a pain it's going to be to clean up the mess would discourage, but is actually probably pretty healthy behavior.

I was not there for this, but when he came home, he rushed, dripping, into my office and proudly announced, "Ian lie down puddle!" 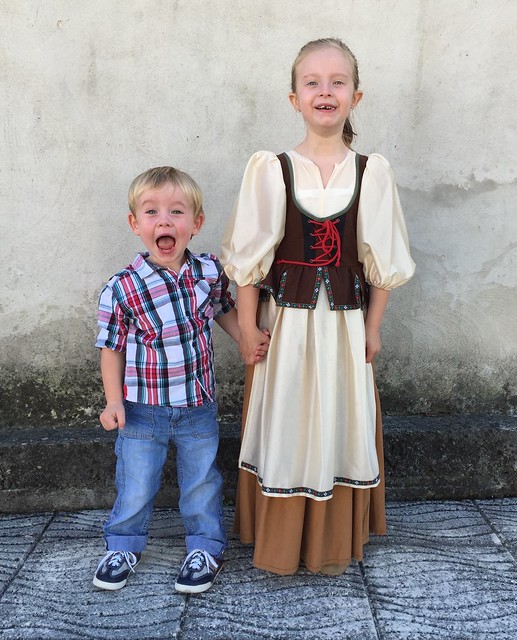