State of the Offspring Address - August 2015

To say that August was a month of milestones would be an understatement. The kids spent almost all of August in the little town of Higuera de la Serena, in Extremadura, in southern Spain, where their maternal grandmother is from. They had a blast, with the lack of schedule and structure that accompanies many memories of summer vacations. The milestone that most excites me is that Nora finally learned how to ride her bicycle.

Nora Can (FINALLY) Ride A Bicycle

It's been a long, bumpy, and frustrating road since the first time she tried another kid's bike in a playground, through her efforts with her own bicycle this year. This month, over summer vacation, she finally got the hang of it, over the course of two days, with probably only 60 times down a 50 meter stretch of road with someone holding onto the bicycle to prevent her from falling. Because this has been such a stressful battle, her mother and I are absolutely elated!

Ian Can Ride His Pedal-less Bicycle

Ian also got a bike last Christmas, but it was the pedal-less kind. During the spring, the seat, at its lowest setting, was still a little too high for him, but this summer we had to actually raise it a bit once he got the hang of it. He loves it! Of course, it helps that his sister was spending so much time on her bike, too. 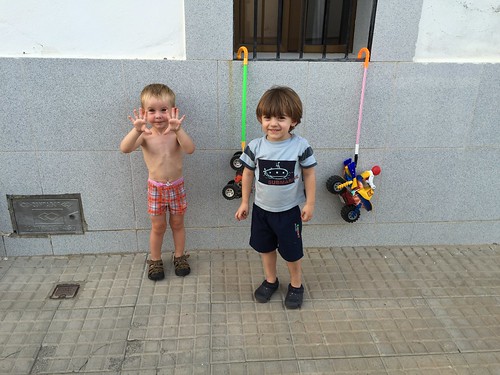 Ian immediately bonded with the next door neighbor, Joel, who is a couple months older than him, and talks quite a bit more. They have the same totally-stereotypical-boy interests of motorcycles and cars and balls.

In the first scene, you can hear Joel saying, "Eso se puede arreglar, Ian." (That can be fixed, Ian), and Ian looking at me, saying, "Roto!" (Broken!), and not letting Joel fix it.

In southern Spain during the summer, the kids spend most of the time barely clothed, and the clothes dry in the sun on the clothes line faster than they would in a dryer. So we took the opportunity to take off Ian's diaper. After a week or so, he got the hang of doing a poo in the potty in the morning right after waking up, but he never, ever figured out how to predict urination with more than one second of warning, just enough for him to spread his legs apart to not pee on his own feet. 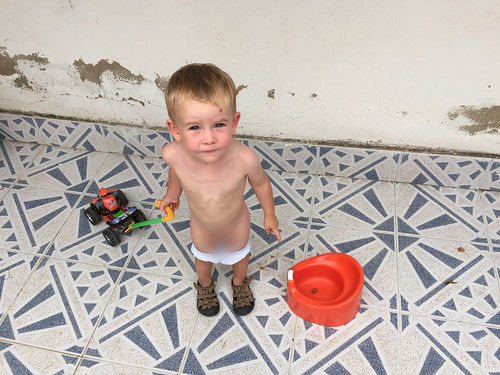 Proud pooper. It turns out that we were celebrating over the hard cork, and the rest of it came out a few minutes later in his undies. Ugh... As they say, It happens.

When we arrived back down south to pick up the kids, after two blissful weeks of solitude on the north coast, we were informed that my in-laws had taken a step we have been fearing for a while now. Nora never, ever used a pacifier. Ian rarely used them as a baby, but around his second birthday, he became quite the chain-smoking addict, asking for his pacifier, called el te-te in our house (short for chupete), any time he was even moderately stressed. My in-laws informed us that all of the te-tes were "lost", and that whenever one was requested, they had been saying, "Okay! Let's go look for it!" which distracted Ian just long enough for him to forget about his thirst for a te-te hit.

So far we've managed to maintain the ruse, although we did give him one briefly on the drive back north when we were passing through the Cantabria mountains near Reinosa, and he was right on the puking precipice. If we could have this problem solved, that would be awesome!

Nora's best friend at home, Carmen, is two years older than her, and her best friend in the little town where we go in the summer, Nahia, is, too. They have very similar personalities, a little solitary and shy, but they kept asking their parents when they could get together next. Both Carmen and Nahia pull Nora in good directions of maturity and good behavior. 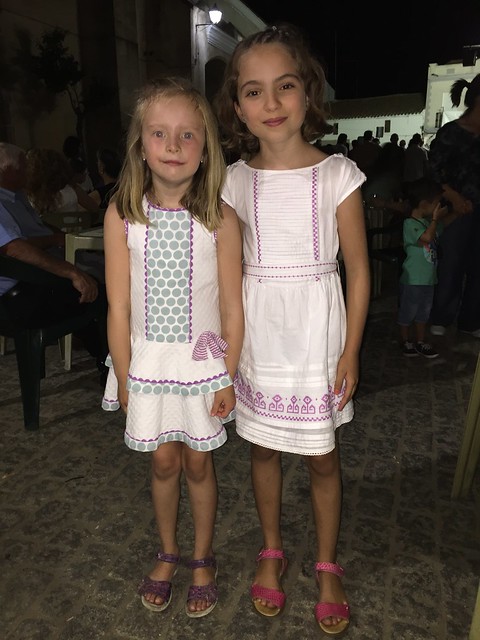 Nora is about to start first grade, and Nahia third. Nahia's grandfather is Nora's great-grandfather's nephew, which I think makes them third cousins. They are also related via Nahia's grandmother, so they are 3+ cousins. 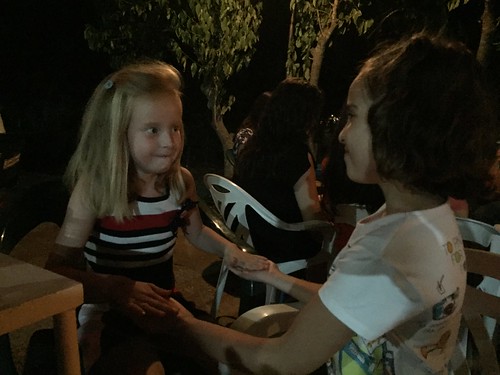 I taught them how to play this hand-slapping game that I learned as a child. It kept them occupied for a while, letting the grown-ups chat. We get along well with Nahia's father. 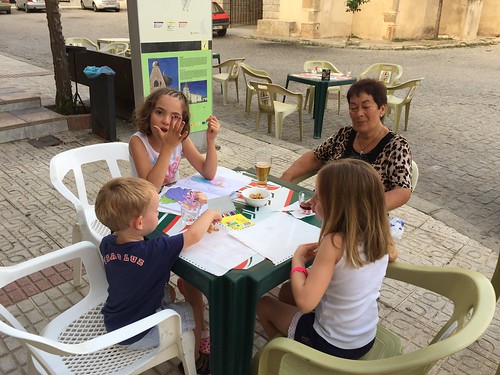 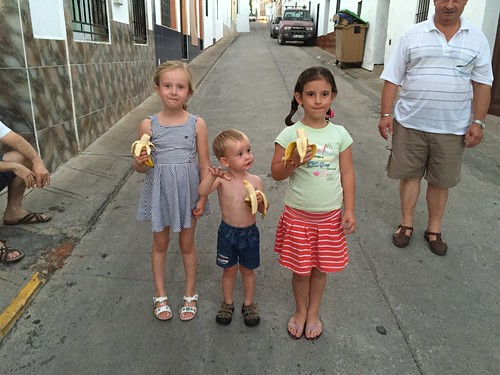 Nora also hit it off immediately with her second cousin, Valle, who she only sees a couple days a year. Valle, despite their similarity in height, is also two years older than Nora.

I'm certain that at least some of it is from coming off a fortnight of total will-bending control over his grandparents, but Ian's personality and temperment have changed this month. He gets tantrum-angry at the drop of a hat, and seems to go out of his way to disobey rules. While I believe that the whole "terrible twos" phenomenon is largely a myth, both Nora and Ian have undergone a shift at this age that made them much harder to deal with as a parent.

Since returning, he has been going to bed at around 1:00 am, and being a real crankshaft in the morning when it's time to get up. Because my wife gets up at 6:00 am to go to work, we can't really leave him in bed whether he likes it or not, because then she can't sleep at all. At least until school starts on September 10th, I have relatively unstructured mornings and can deal with his late nights, but something's gotta change. We'll see...

That's about all I have to say for this month, so I'll leave you with a photo and video presentation. 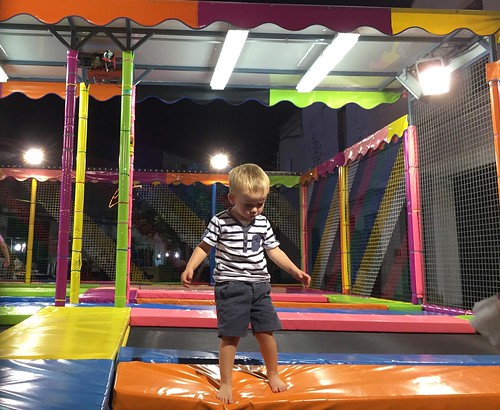 Both Ian and Nora lost their trampoline virginity this summer. I had a brilliantly edited video, with slow motion effects, ready to share with you, but my phone crashed and I lost it. It was fun to watch both of them go from being total klutzes to actually figuring out how to bounce. Nora made it as far as learning to bounce on her bottom and back up to her feet. 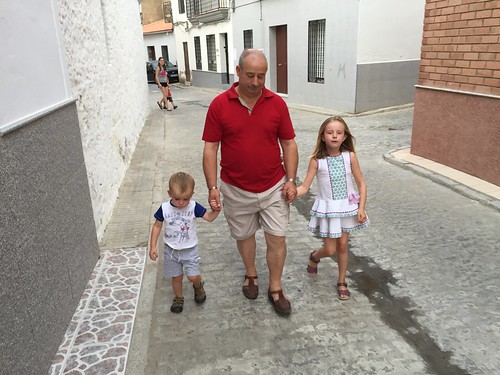 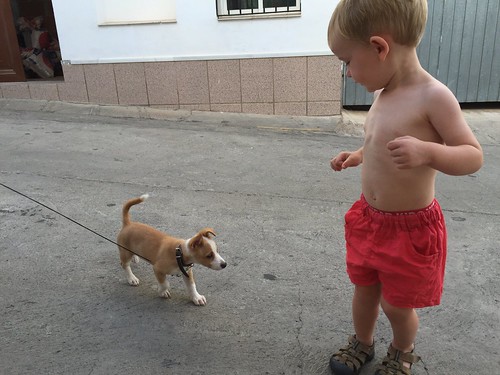 Getting to know the fauna. 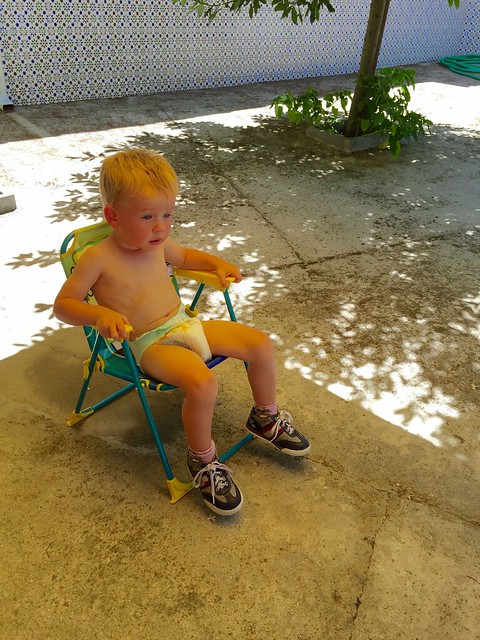 This sums up summer vacation.

Hello, ladies! Welcome to my chalet. 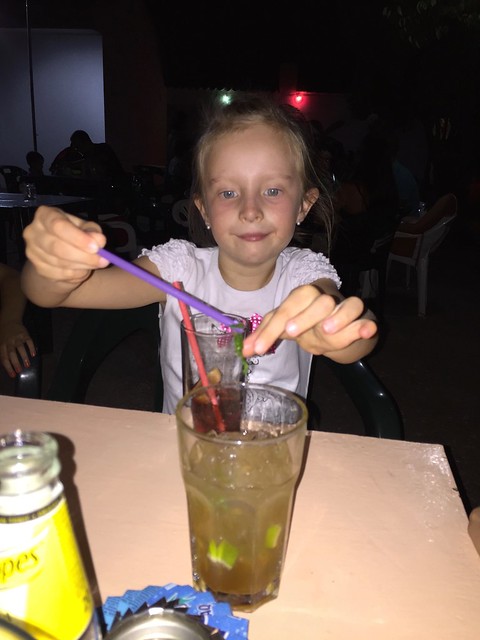 My mother used to eat the olives from her father's gin martinis, and my daughter eats the spearmint from her mother's mojitos. 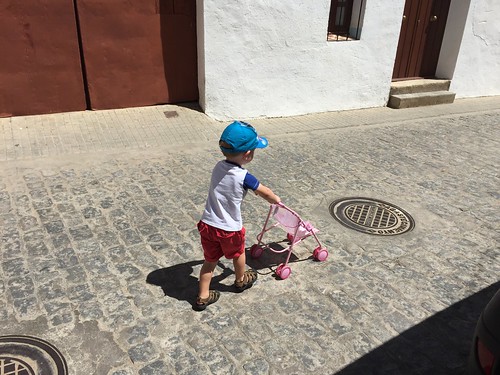 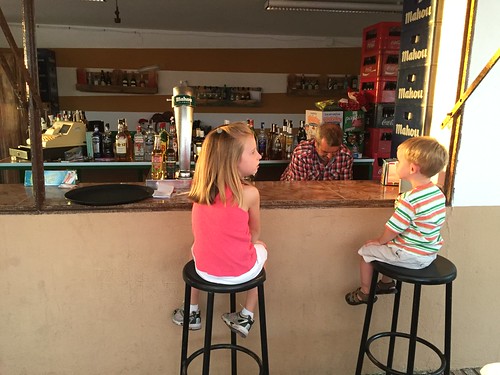 Riding their bicycles up north (notice the gray sky and wet ground). 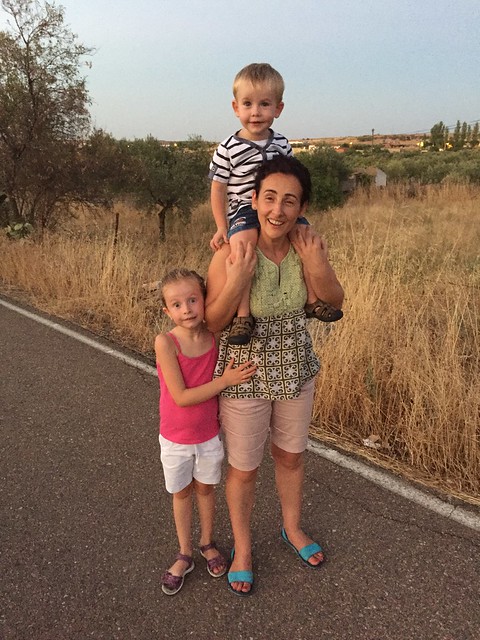 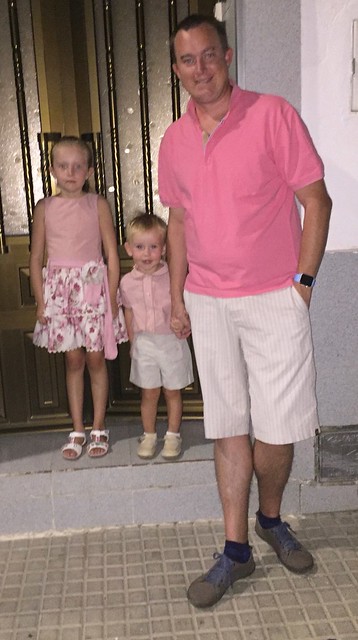 The state of the offspring is strong! ...and agile! 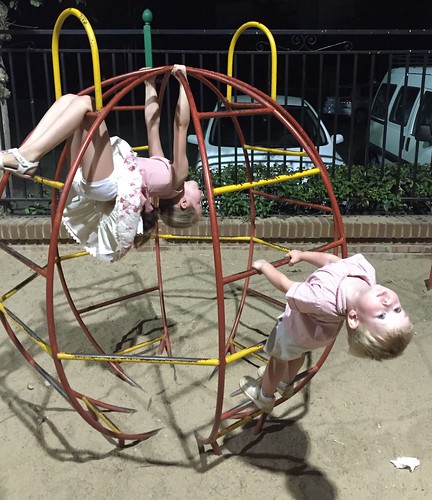