State of the Offspring Address - July 2015

July has been a pretty full month. The biggest event in the children's lives was that Nora started her two week summer courses: skating and crafts. Every weekday we go to Nora's school at 10:15 to begin getting her suited up for skating. She has knee, elbow and wrist pads. Her skating class is from 10:30 to noon. At noon, she takes off all her gear, stows it in the school lobby, and goes up to what will be her English classroom for the next six years to do manualidades, which translates to handicrafts, until 1:30pm. She made some bracelets, a coaster, and some wall art made of little pieces of foam. From what I can tell, she likes the class a lot. There was one day, however, in which she said that two of the older girls had been singing songs about her, not nice songs. Ugh? This already? I told her that anyone who insults her is being silly, and that if they do it again, that she should tell the teacher. We haven't heard of any incidents since.

I count myself very lucky to have never suffered from, nor to have witnessed an anxiety attack, and I don't want to use a clinical term incorrectly, but it seems to pretty well describe what happens to Nora sometimes when she is left at an extracurricular class by a parent. Several days when I took her to skating class, she would just freak out at the thought of me leaving. It was as if she was terrified. When she's in this state, she has no ability to give a reason for her emotions. She can agree that yes, she loves skating, and everyone at the class is nice to her and that she knows I'll be back after the class is over, but Please, Daddy, don't leave me here!! I don't want to stay!!!

We experienced this with the dance class, as you may recall, dear reader.

It’s difficult to draw the line between “It’s okay, sweetie, you don’t have to do anything you don’t want to do” and shoving our little bird off the branch for some terrifying free fall that may lead to a necessary survival skill. Everyone can probably remember something that they were forced to do against their will as children that they were later glad they had been forced to do. I think we’ve decided to make future dance classes mandatory, no backing out. We’ll see how that goes.

In that instance, telling her that it was not optional seemed to have worked. However, my tactic of saying, "No, you have to stay." Did not work with skating. We had one morning in particular, of which I am ashamed as a parent, in which I yelled at her that she had to stay, but she kept skating after me. Eventually she ended up coming home.

The following day, I constructed a plan. All morning as she was getting dressed, having breakfast, and generally getting ready, I had her repeat the following sentence out loud, with ever increasing confidence:

I'm going to be sad for a little bit when Daddy leaves, but then it's going to get better and I'm going to have fun.

And doggone if it didn't work! She was totally cool about my departure. And she has been for several subsequent days. I think maybe knowing that the storm was going to come helped make it easier to weather.

When she's actually there skating, she has a great time and has improved a lot. She's even learned to skate backwards.

The first couple of days, they held skating class outdoors, but then it rained, and they realized that, even on sunny days, having it in the gym was far superior, both for protection from the elements and the superior skating surface.

Ian's language is developing, albeit slowly. His languages are totally mixed up; he thinks that a place nearby is "aquí" while a place far away is "there". The Spaniards get confused when they try and talk to him and he surfaces his English words. Although a lot of his words end up being in neither language and resulting in confusion and frustration for both parties.

One adorable habit he's picked up is responding to both "Gracias" and "Thank you" with a shouted "NADA!!", a shortened form of the proper Spanish response "De nada".

Also of note, watch how he echoes what his sister says. That's very common.

We began the month with some pretty serious bug (spider?) bites on both children. Ian had the worst of it. We took him to the doctor and he got a topical antibiotic.

It got all hard and flaky and disgusting for a bit, but he didn't really complain that much.

One evening this month, when I was getting Ian ready for bed, he accidentally hit his head on his changing table, to which I said, "Bonk!" and he thought that, both the head bump and the onomatopoeic exclamation were just the funniest thing ever.

Try and keep a straight face. I dare you!

We have applied for Nora to take a class at the local municipal music school. We could choose from "Pre-instrumental theory" – apparently they normally don't start with instruments until age seven – or "Violin with the Suzuki method", which starts at age four. I can see the rationales behind both methods, but I'm more of a player than a thinker, musically, myself, and the "Hey man, we all learn to talk before we learn to read, man!" Suzuki philosophy makes sense. She's not even guaranteed to get in, as apparently there is more demand than supply, but we'll see.

When I mentioned to Nora that we were signing her up for music class, she said,

"I know that music can be written down, and that there are lots of lines. But if you look at the music, you can't hear it until you play it.......although, I think that maybe if you get good enough at reading music, you might be able to hear it just by looking at it."

Mind. Blown. That's some really insightful thinking, if I do say so myself. 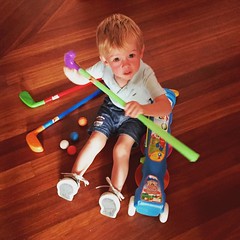 Ian got some plastic golf clubs as a gift. They came with a little golf bag with wheels, several balls, a couple of tees, and some little plastic holes. No matter how hard I tried to get him to hold the club with two hands and swing properly in front of him, he continued his one-handed technique. In the interests of the documentary filmmakers documenting his rise to PGA greatness, I took it upon myself to record some video of his very first attempts with a golf club. There are many whiffs, but some good strikes. At about one minute into the video, he stops to take a moment to address the ball (put his club beside it) to assure a hit. What made me especially proud, however, was how he, at the very end of the video, actually took a moment to look at his target and align his body to achieve the trajectory he wanted. He's a natural!

It's too bad we don't live at a country club, or this could really be a pursuit.

One night we decided to walk across this famous iron bridge to the next town over to a restaurant for dinner. The walk over, and the dinner, were a little rough, but the walk back was absolutely divine, with the four of us laughing and giggling and having a wonderful time. 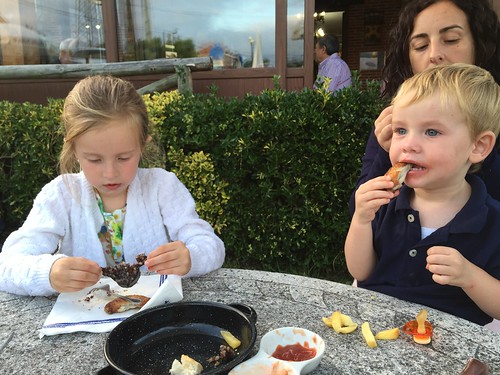 Eating some morcilla (Spanish blood sausage) and fries on said evening out. 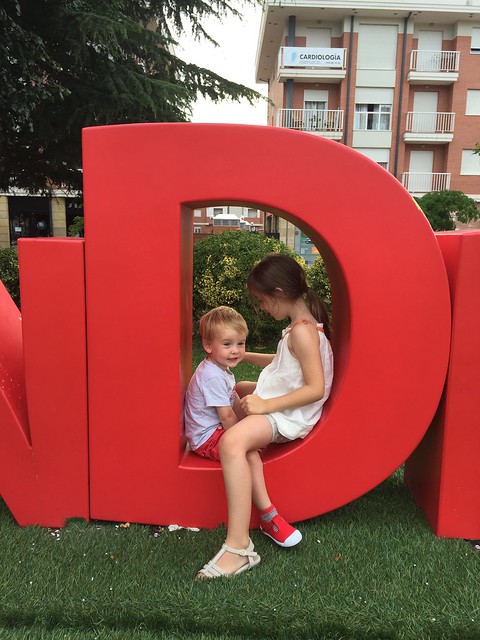 Ian gets along very well with Nora's best friend, Carmen. 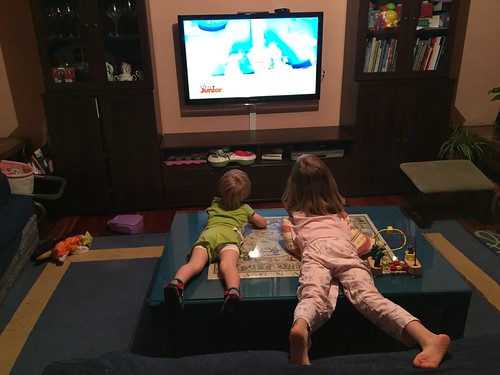 Who needs a sofa on which to watch cartoons when you can be sprawled across the coffee table? 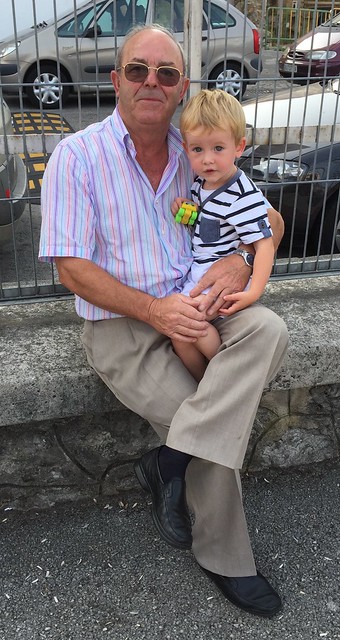 This is Ian's best friend in the neighborhood, Nando – I mentioned him in April – who delights in filling the grandfather-shaped hole in the children's lives when there is not an actual grandfather here. He brings his actual granddaughters to skating class with Nora, and Ian has learned that he can ask him for two pieces of chewing gum (one for Nora) every day and get them every time. 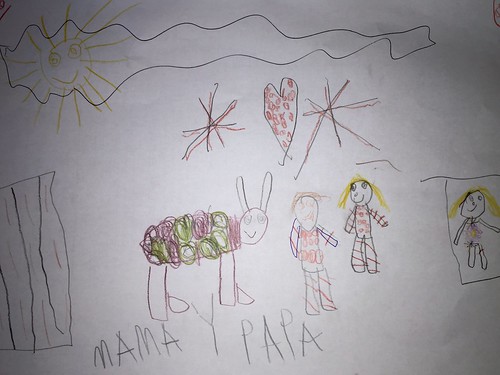 San Fermín, the world famous "running of the bulls", takes place in July. It inspired Nora to draw this bull run. The "Mama y Papa" is not a caption identifying the characters, but a dedication of who the work was made for. The girl on the right is safely behind the fence. 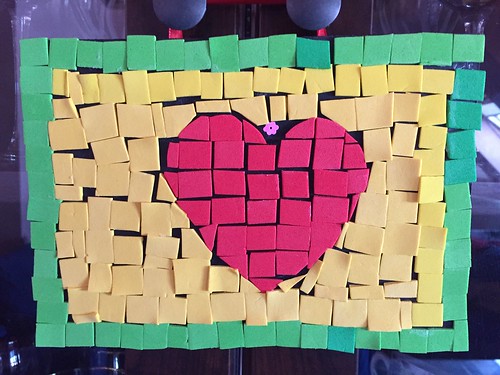 Nora made this in her handicrafts class out of pieces of colored foam. Look out, Gaudí, here come some mad tiling skills! 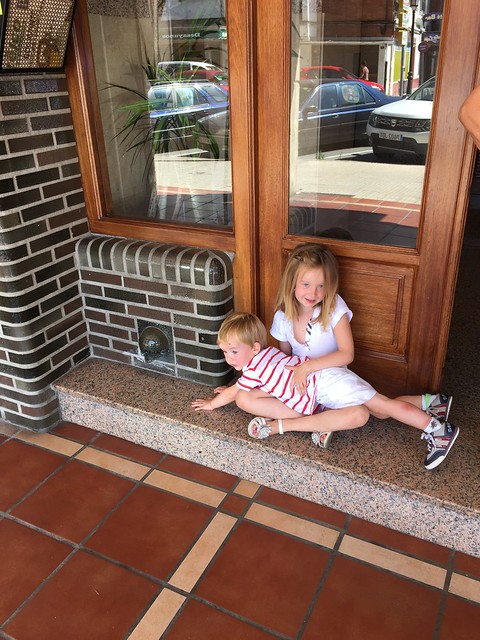 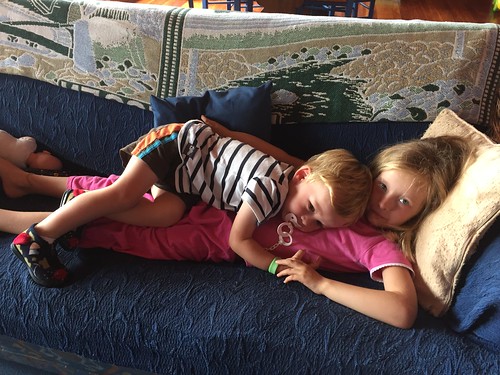 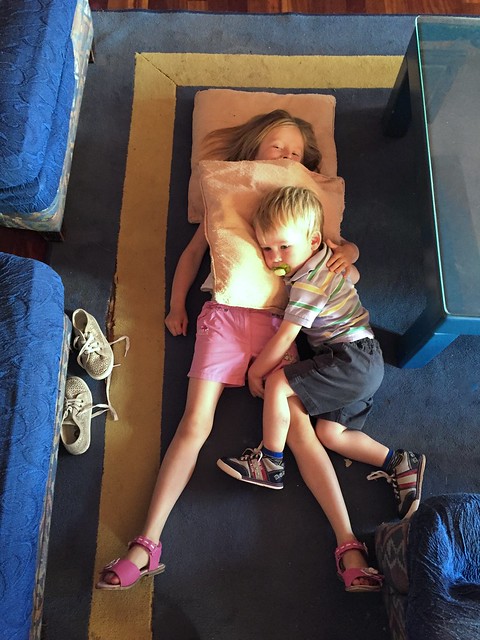 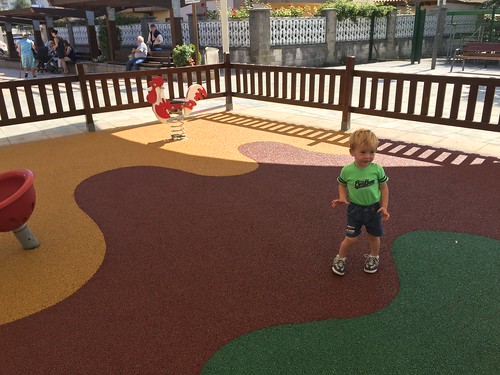 The primary playground in the center of town has been closed for renovations for at least four months. The primary improvement was to put a roof over it, which is nice in the summer, but, if we're being totally honest about life in Cantabria, is primarily to keep it dry the rest of the year. Ian was the very first child to set foot on the newly laid rubber surface when it opened. "Another thing to put on his CV", quipped his mother when I told her. 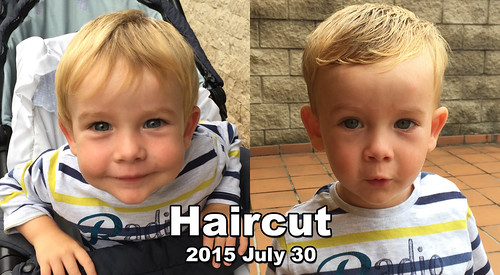 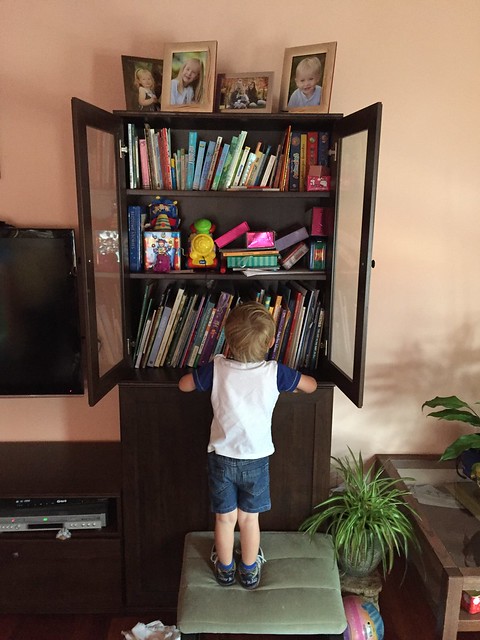 I had no idea that he had figured out a way to access these books until one day I found him browsing them for something to thumb through.

I spent quite a few days this month single parenting, as my wife had to work many long hours, and at one point she had to leave for several days to attend the funeral of a beloved aunt. D.E.P. Tía Antonia. During these times, the weather was nice, and we spent a lot of time outdoors. I recorded some video of them being adorable, playing together.

In the second scene, they had invented a game in which Ian had to push leaves through a slot in a playground structure that he needed Nora to lift him up to get to. Teamwork!

I continue to be amazed at how well they get along. They almost never, ever quarrel. This is mostly because Nora is so deferential; if there are three cookies and they decide how they are distributed, Ian always gets two. 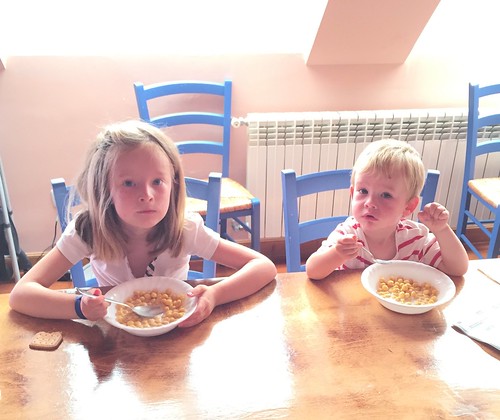