The meaning of the Confederate Flag

The following post is an essay written by my high school World History teacher, Kevin McCloy, whom I rank as one of my all time best teachers and one of my better friends. It was originally written in a private response to someone on Facebook, but he executed it so beautifully that he shared it, and has graciously given me permission to share it here. This is McCloy's second appearance on this blog; his first was a heart-rending tribute to his friend, Chris Hondros.

Settle down, class! Everyone please take your seat. It's time for a history lesson... All the words below are his. 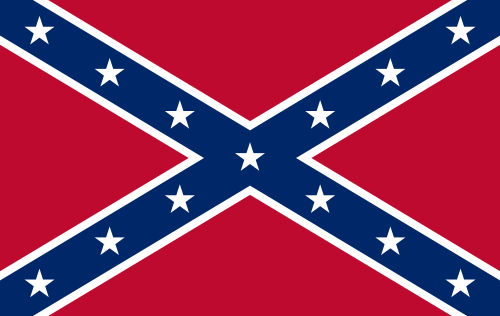 You've asked me to tell you about the "true" meaning of the Confederate flag. I will do the best I can to explain, but I need to make clear a few points from the beginning:

One, the flag is a symbol, as are all flags. Symbols stand for ideas, ideals and concepts. A mathematical symbol for addition, the "+" sign, is recognized by all who learn this particular concept as symbolizing the concept of addition. (It's not the same for all cultures believe it or not.) But, the "+" sign could also stand for the Christian Cross, if shown in that context. (Incidentally, there are also some who claim that the "x" is the sign of the true cross that Christ was crucified on, but that's another discussion.) But, let's stay with the idea of the "+" sign as also a symbol for Christianity and the sacrifice that Christ made on the cross for all mankind. To the classical pagan Romans under whose law Jesus was crucified, the cross was a symbol of treason and execution for crimes against the Roman state. (Imagine if some cult today 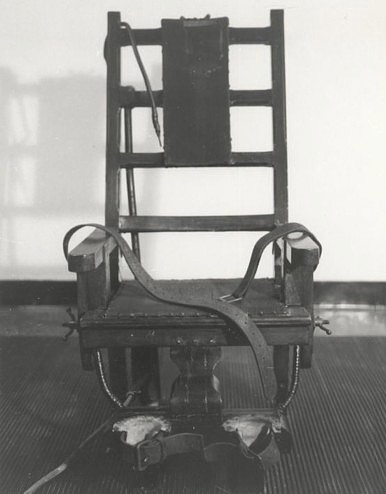 decided that the electric chair was a religious symbol of redemption through execution, and began to worship an executed convict as their "savior." That would be how the Romans looked at the cross, so try to imagine their surprise, confusion and even disgust that a religion would use that symbol, the cross, as a symbol of redemption and salvation. The modern world no longer looks at it that way because the Christian faith outlasted the Roman Empire and the Christian symbol now has the meaning it does.)

So, secondly, all symbols have meaning, but not all people look at the symbol as having the same meaning. To different people looking at symbols, it all depends on what that symbol stands for, for them.

Now, the history of the "Confederate Flag" is also filled with controversy and frankly, misunderstanding and misinformation about history itself. I will simply say that what most people today recognize as the "Confederate Flag" was never actually officially the flag of the Confederate States of America. It instead is the Virginia Battle Flag. (Every Confederate state had several varieties of flags, as the Confederacy formed for the express purpose of allowing each State more independence from a "federal" government, so getting any sort of uniformity was difficult to say the least. Couple this with the fact that the Confederacy was brand new and formed in the chaos of war, and hadn't had the time yet to develop and maintain symbols accepted by all.)

Now, the "official" Confederate flag that incorporated some part of the "battle flag", as adopted in 1863, was a large white flag, with the upper left corner portraying the "stars and bars" that most today incorrectly assume was the "Confederate Flag." (The "stars and bars" were where sits on today's modern US flag the blue field with the white stars.) Several different varieties were proposed, adopted and then changed. None of them were the "battle flag" that today is accepted as the flag of the Confederacy.

After the Civil War and during Reconstruction through the 1870's, no occupied former Confederate state was allowed to fly any variation of the "Confederate" flag, as it was now a symbol of rebellion and treason to the victorious Union, as well as a symbol of defeat and loss to the Southern states. (Think of how people now view the Nazi symbol and flag. The symbols of a defeated cause and ideology are no longer acceptable.) 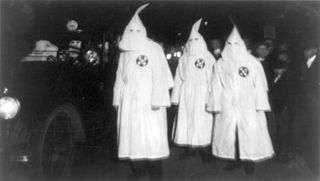 However, the Ku Klux Klan (formed by Confederate veterans as a support network for fellow veterans) quickly came to the conclusion that all their woes and sufferings were caused by blacks, so they began their campaign of terror and violence against blacks. They adopted (naturally) various examples of the outlawed "stars and bars" as their symbol of white supremacy, and to many African Americans, it became the symbol of murder, hatred and terror. The Federal government, in occupying the defeated southern states, tried to prevent the attacks.

Reconstruction ended, corrupt political bargains were made between southern Democrats and Northern Republicans and the Federal government withdrew from the South and stopped enforcing laws that ensured equality and justice. As a result, Southern states were able to once again oppress blacks through laws no longer prevented by the Federal government. A system called "Jim Crow" laws was imposed, denying African American citizens their rights for the next 100 years. One hundred years of lynchings, violence, oppression and hatred against blacks in the South.

In the 1936 Olympics, Jesse Owens, an African American, stunned the Nazi world (and directly contradicted their belief in the "super race" mentality of white supremacy) by winning several events. Yet, in his own country he was treated as a second class citizen.

World War II saw many African Americans drafted (and many volunteered as well), to fight in segregated units, still oppressed by the very country they were serving, fighting against Nazi racism and oppression. When those veterans returned home after the war, they questioned why they had fought and died fighting Nazi racism, yet their own nation treated them almost as badly as the Nazi's had treated Jews in the years leading up the war.

As a result, the Civil Rights era began, as African Americans and those that sympathized with them campaigned to change the oppressive system, particularly in the South. Of course there were those that resisted, and of course they were white, as they saw the Jim Crow system as legitimate and legal and part of their birthright of white supremacy.

As part of the resistance to the efforts of Civil Rights campaigners, several southern state legislatures passed resolutions to once again fly the "Confederate Flag" over their State capitals. Some went so far as to even redesign their existing flags to incorporate the "stars and bars" again, something that hadn't existed since 1865. The all-white power structure fought tooth and nail to resist equality and racial justice.

So, imagine this: In the name of "history" and "heritage" and "pride", Jews would be forced to live under a government that still flies the Nazi flag. They would have to drive down streets named "Goebbels Avenue" and "Rommel Street" and "Hitler Boulevard." They would have to go to a courthouse where on the green next to the steps was a statue of an SS Trooper, proudly holding a Nazi salute, with the words "Our Nazi Dead" inscribed on it.

The Nazis lost. Their ideology was destroyed in war when the free world rose against them. Their legacy was the memory of concentration camps and crematoriums. Why would we ever let their symbols mean anything other than what they do?

And, as history shows, the Southern "white power" resistance to equality and equal rights was overcome. Jim Crow laws were abolished across the south. The Federal government set itself as watchdog over the electoral and legal process in the south. But, the symbols remained. States like Georgia and South Carolina still fly the "Confederate Flag" (even though it never was the "confederate flag") over their capitals in the name of "history" and "heritage" and "pride." What do you think those flags mean to the millions of African Americans who see them every day?

Recently however, several Supreme Court decisions have weakened if not outright eliminated those Federal safe-guards against political and economic attempts to restrict equal protection for racial minorities. The result have been sweeping changes in electoral procedures in several states, many of them in the south. All have been passed with the claim of either "prevention" of electoral fraud or "streamlining" the electoral process, but the end result is the same; making it harder for the poor and minorities to vote. African Americans are feeling greater fear that any progress that might have been made in the previous decades is now being eliminated and rolled back. 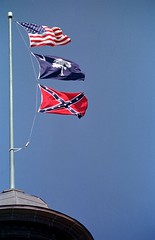 The flags have not been taken down in over 50 years, even though they stand for a "nation" that was defeated in war over 150 years ago, a nation that was formed for the purpose of protecting the rights of white people to own black slaves, a symbol of white supremacists desire to intimidate and terrorize blacks, a symbol for all-white state governments to prevent the federal government from ensuring that "all people are created equal, and endowed by their creator with certain inalienable rights, and that amongst these are life, liberty and the pursuit of happiness."

A flag is a symbol, and means different things to different people. But used by enough people to mean the same thing, and it becomes a symbol for that thing. I think it's time we realized that the Confederate flag no longer needs to fly over our state capitals. It only needs to be used now for illustrating history, not what we stand for today.