For some years my wife has, often as a Christmas present from her employer, received wooden boxes or cylindrical containers with port wine in them. We have never been very keen on this type of wine; on the rare occasions that we have opened a bottle it has been forgotten, and then used for special recipes that call for port, usually to make rich red sauces.

Port, as you may know is a kind of sweet, fortified wine from Portugal. Much like how alcohol snobs will tell you that you can only call a sparkling white wine “champagne” if it came from the Champagne region of France – and the same for whiskey from Bourbon County, Kentucky – a fortified wine can only be “port” if it was produced in the Douro Valley in Portugal. 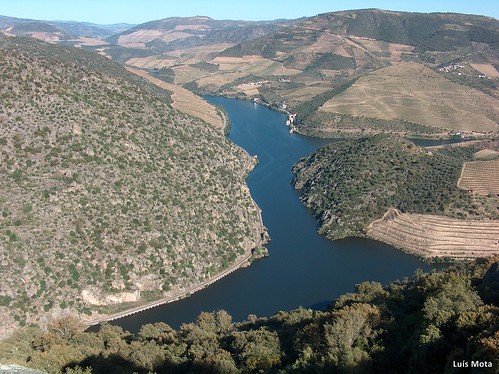 Recently, I discovered a bottle of port at the local grocer that caught my eye. In my experience, port has always been a very dark red color, but there, on the shelf, I saw a bottle of Oporto Blanco – white port!

We discovered that we like white port considerably more than regular (red) port. Red port has always seemed too sweet and heavy, but, while the white port was also sweet, it felt considerably lighter in the mouth. It has a touch of a sour, fruity aroma that makes it very easy to drink. The first sensation in your mouth is the soft sour taste, followed quickly by the sweetness. Where before we never had the inclination to have a glass of port, now we find it very easy to have a little glass any time, before or after a meal. We drink it cool from the fridge in little family heirloom glasses. We have been enjoying the experience.

Since discovering its existence, I have been on the lookout, and it is not available in every supermarket in Spain, but if you're in the UK, it's definitely one of the wines from Tesco, which you can even order online now.

Port wine originally comes from the production in the Douro Valley in the north of Portugal, and it is named after the city of Porto, where most of this wine was taken to be delivered by ship to different places. The white port is made from white grapes, and it is a fortified wine, this means it has some spirit added, aguardente, which literally translates to "fiery water", that stops the fermentation of the wine and therefore there is quite high level of residual sugar in the wine, resulting in the sweetness. Also the alcohol content of this wine is higher than of other wines. The one we bought is 19% alcohol.

The color of white port is a little yellower than typical white wines that I see in this region of Spain. The white ports get darker the longer they are aged in oak barrels; some white ports end up so dark that it can be hard to distinguish what color the original grapes were.

So, I would recommend you give it a try. Even if you are not so fond of regular port, do not rule white port out!