Boating In The Bay – A Daunting Tale of a Family Marooned

I've lived here by the beautiful estuary, delta, tidal basin and beach that is the triangle of Colindres, Santoña and Laredo for a full decade. Two features dominate the landscape: the long wispy finger of a sandy peninsula that makes up Laredo's world-class Playa Salvé, and Mount Buciero, the rocky mountain that protects all three from the brutal waves of the Cantabrian sea. In the ten years I have been here in this fishing village, I have never once been on a boat. All of that changed yesterday. Like any good fantasy book, let's begin this story with a map. The big green blob at the top is the Mount Buciero, and the long beach in Laredo is obvious. Colindres, where I reside, is tucked behind both of them, where the Río Asón, which is born here, dies into the sea. 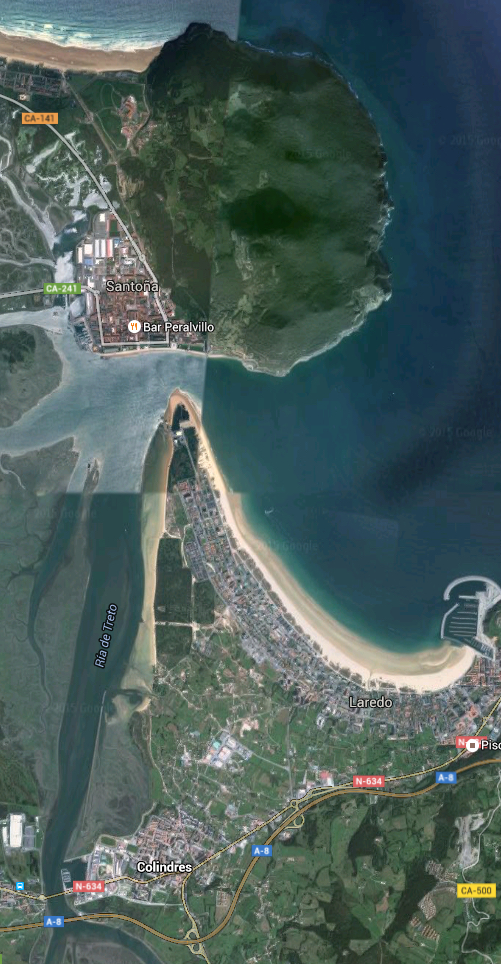 It's a very interesting place, since the water to the left of the sandy peninsula is fresh, and the water to the right is salty, and they mix in the middle. Also, note how close the tip of the beach comes to the town of Santoña.

Here is another view, looking north, a photo I took from a nearby mountain. You can see how tall Mount Buciero is. 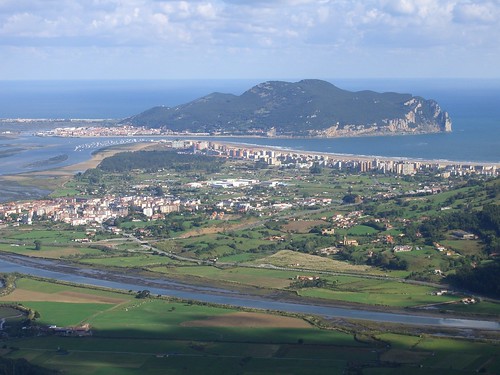 And from ground level in Colindres...

There are two things that we – my wife, my parents and I – have been wanting to do ever since we became aware of their existence as services to the public. The first is to take a tour boat ride around to the lighthouse on the eastern side of the mountain and around the bay, and the second is the short little ferry from the tip of the beach to the port in Santoña. Driving to Santoña is quite a hassle, as one must go considerably out of the way to get there, but driving to the tip of the beach is quite easy, so a lot of people from Laredo and Colindres use the ferry.

On Sunday, my wife, mother and two children drove to the end of the Laredo peninsula and boarded the ferry. My father stayed at home with a stomachache. 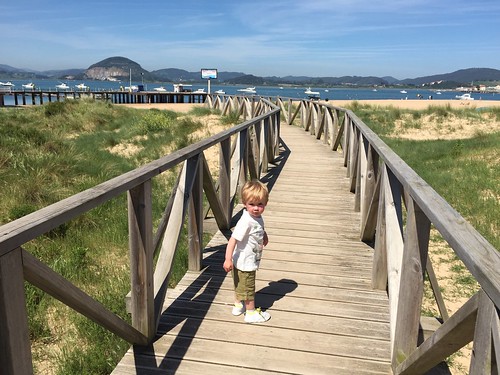 "C'mon, Daddy!" You actually have to walk out onto the beach to get the ferry, as there is no official pier or dock or anything.

After I carried the stroller to the boat, the others were lagging behind. Here you can see the boat "landing". 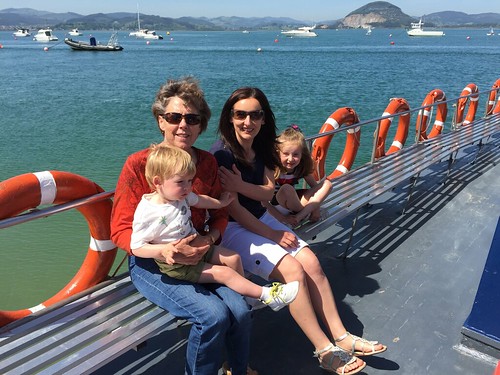 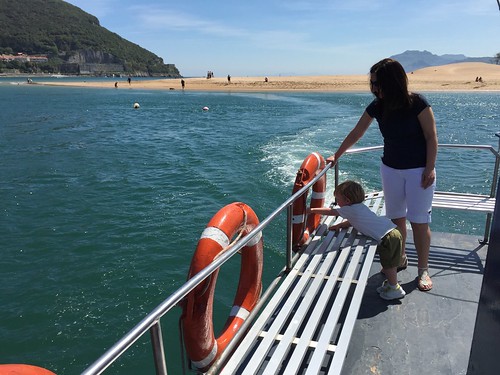 Ian thought that being on the water was about the coolest thing ever. 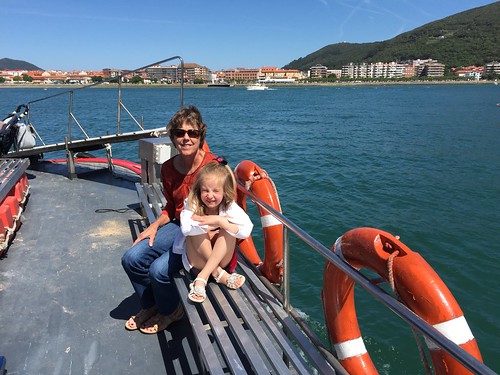 Looking towards our destination, Santoña. 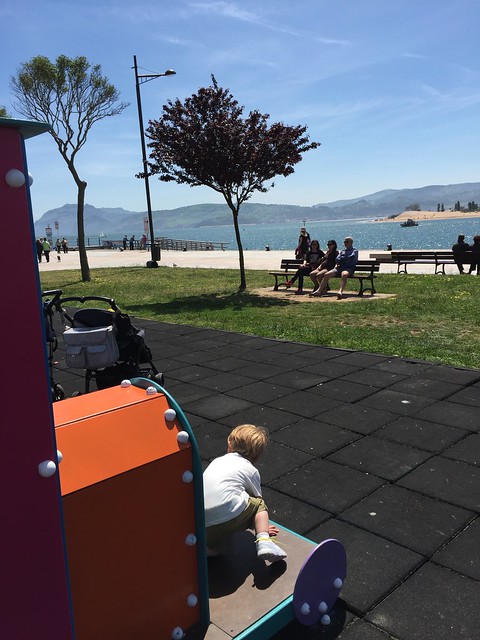 Once in Santoña, we immediately went to the park to blow off some toddler steam. In this photo you can see both the dock where we landed and the sandy beach that we departed from. It's really not that far. I suspect that a moderately fit swimmer could cross it, despite any river-emptying-into-the-sea side currents.

As you can see, the weather was fantastic. 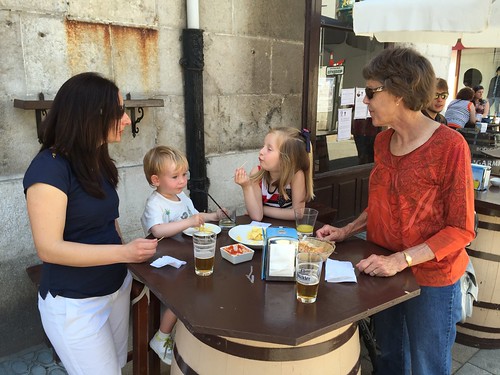 Our first sustenance destination was a bar known for their patatas bravas, fried potatoes with a spicy tomato sauce. With my tolerance for picante, the sauce barely registered hotness with me. Even Nora ate it happily. 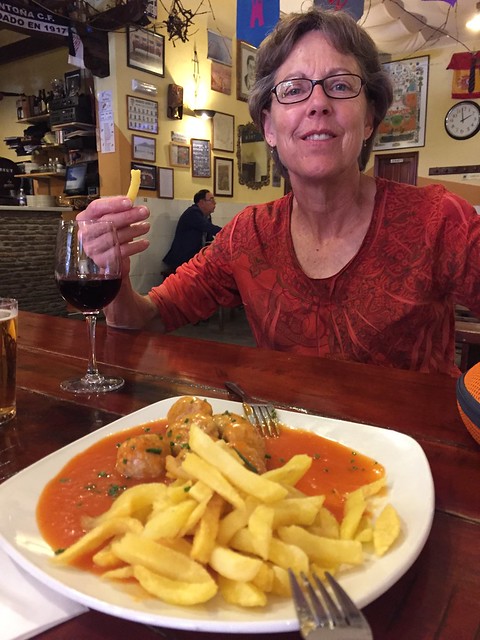 My mother didn't care too much for the albondigas de verdel, mackerel meatballs, at the next place. 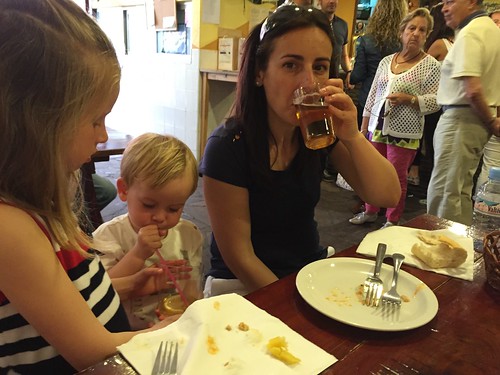 Ian and Nora, however, helped clean the plate.

After satiating our bellies, we went for a long walk along the waterfront. 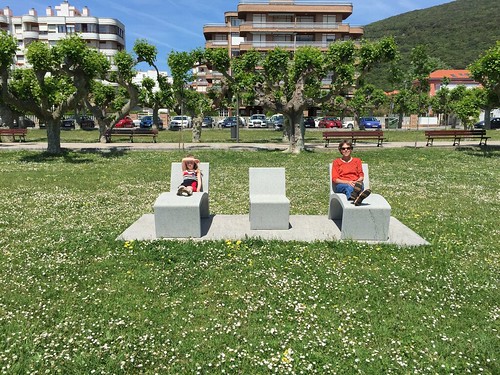 Nora and my mother stopped to test out some concrete lounge chairs in a flowery meadow. 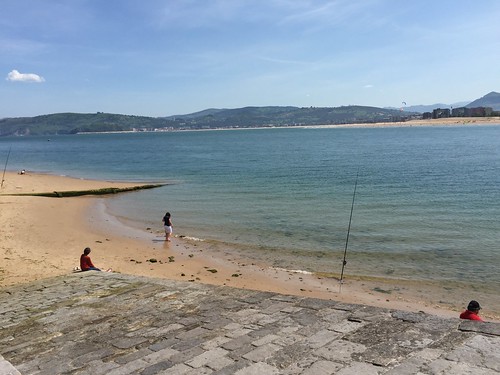 We even went down to the water, which was freezing at first, and then became tolerable as sensation was lost in the lower extremedies.

After our walk, which Ian slept through entirely, it was time for some refreshments. 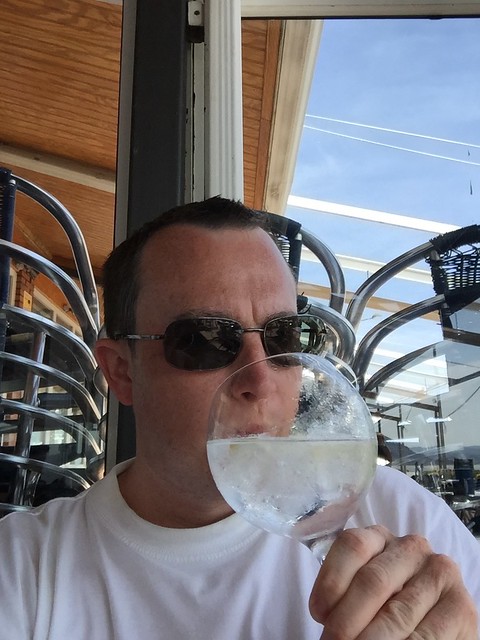 A gin and tonic for myself... 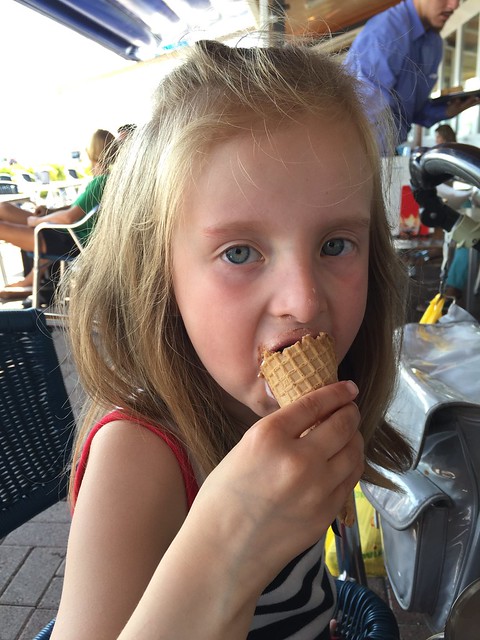 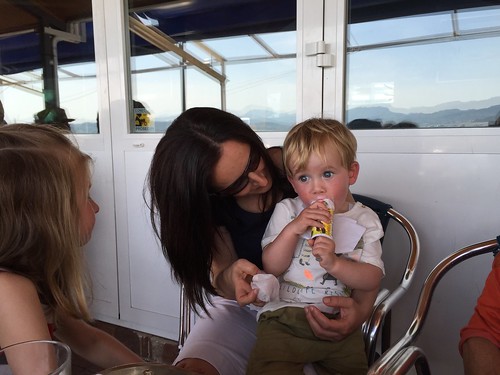 ...a push-up ice cream for Ian, which he held onto vigorously to prevent even a single lick going to his big sister, who had not been very communal with her ice cream, either.

And this, my dear reader, is when the day took a turn for the bizarre...

As we were finishing our afternoon snack, we saw the tour ferry docked and tourists embarking. I have been wanting to do that ride for years, but the one time that I made the effort to follow the posted schedule, the boat never came. And here we were with the boat right in front of us welcoming new passengers. I proposed that, although my father also expressed interest in doing it, maybe we should just take the opportunity and go for it. The guy trying to get people on board approached us and said that it would be 10€ for the adults, 6€ for Nora, and nothing for Ian. My wife, in her infinite wisdom suggested that if my mother, Nora and I wanted to go, we could, but that Ian would not be okay on the boat and she volunteered to stay behind. The rest of us jumped at the offer and ran up the gangplank and up to the observation deck, and the boat pushed away from the dock. 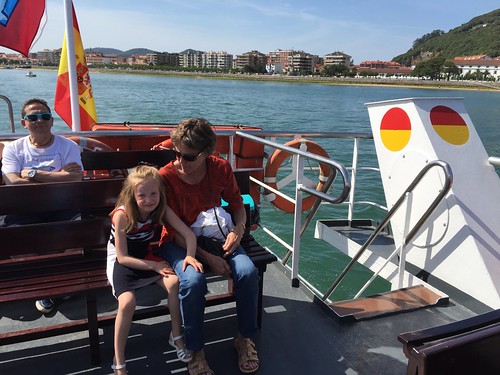 My fellow travelers, leaving Santoña behind.

The first five minutes of the hour-and-fifteen-minutes-long circuit were lovely, with the bright sun and cool afternoon breeze. The weather was perfect, and I doubt there are days with calmer seas. The route was to go to the port in Laredo to pick up additional passengers and/or drop off any passengers that had boarded there last go-round, and then head out around Mount Buciero towards the open sea to see the lighthouse and a cave. The tour guide was constantly talking and informing us about landmarks that we could see. He also gave us a nautical lesson, including the Spanish words for bow, stern, port and starboard, which I forgot about a minute later.

Just as we passed the sheltered water of Santoña, protected from the ocean waves by the enormous mountain, the boat immediately began to rock back and forth. I elected to stand up, which let me use my knees to keep my head level with the horizon, but my mother and Nora were seated. They quickly began groaning and expressing "What have we gotten ourselves into?!?" sentiments. Nora kept quiet and held strong, but it was clear from her face that she was wishing she were elsewhere. I was proud of myself for how well I was managing, but I'd have been happier on dry land. It really makes me sad how unfit for the sea I am, because I have really romantic ideas about sailing.

Here is the situation, as we pull into the port of Laredo: 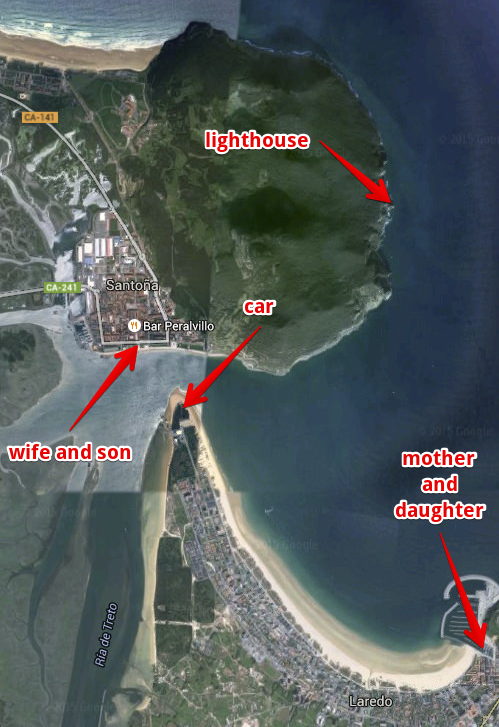 I calculated that, with luck, with another hour on the boat to get back, twenty minutes to get back across the water to the car, and a ten minute drive into the center of Laredo, that if I let the two off in Laredo, I could get back to them with the car and everybody else in 90 minutes. Both of them knew of a central landmark, the Red Cross station at the beach, where we could meet, and between the two of them I was sure they could get there. Imagining the worst case scenario, of arriving there and them not being found, or them getting lost or something, I decided to give them some phone numbers. This required me to root around behind the little unoccupied minibar in the ferry to find a pen and paper. The tour guide caught me, but understood when I explained what I was doing, despite the fact that I'd taken the pad of paper from the open money box full of coins. I told him that they needed to get off and that I would be glad to pay for their rides – in true Spanish fashion, they delayed actually taking my money until the very end – but he was very sympathetic and said he wouldn't charge me for their uneasy crossing. I think he'd seen their faces. I watched as two of my favorite gals staggered up the gangplank and walked into the distance, not once turning around to wave.

When we left my father at home, he remarked, "With three adults and two children, at least one adult can be having fun at any given time."

And so, here I was, alone on the boat ride I'd been wanting to take for ten years.

Solo Voyage Around the Bay 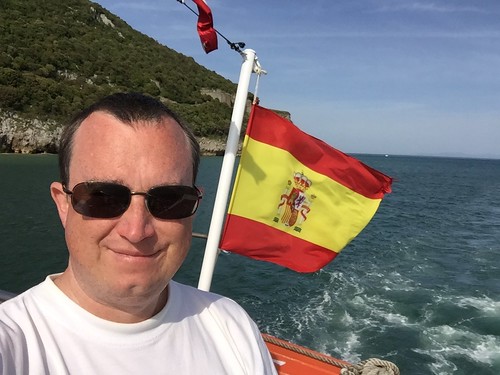 There were definitely times when I was more concerned about maintaining my composure looking towards the horizon for support, but I also really enjoyed the presentation given to us by the tour guide, which was a recording half the time and live half the time. I smiled to myself when he asked everyone how far away they thought the horizon was. If I'd been able to talk, I'd've said, "Dude, I wrote that post!" He told us that the horizon is about 4 km away, which isn't exactly true given that we were at least three meters off the water on the upper deck, but whatever.

I learned that Napoleon – yes, that one – had spent some time in the area, overseeing the construction of forts and defenses on both sides of the mountain, as well as in Laredo, securing the area against the Spanish and British forces who would rather have the land.

Apparently Napoleon dynamited part of the cliff face to make it impossible for sneaky soldiers to land on the tip of the mountain and sneak around along the beach to Santoña.

Wow, I actually wrote that previous sentence an hour before I realized I'd inadvertently made a movie reference. Vote for Pedro! 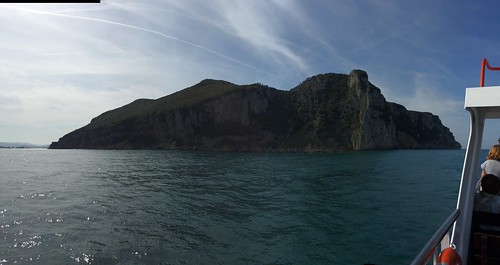 I hardly recognized the mountain that I see every day from this other angle. 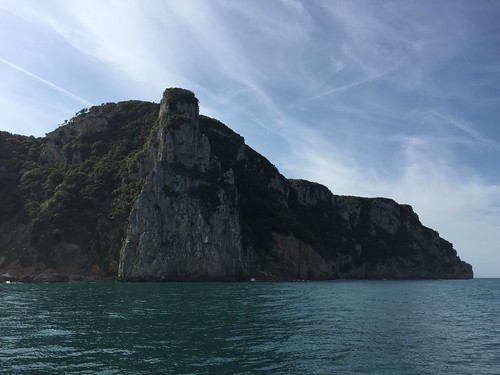 The cliff face could not be less inhabitable. It's just vertical rock into the water. 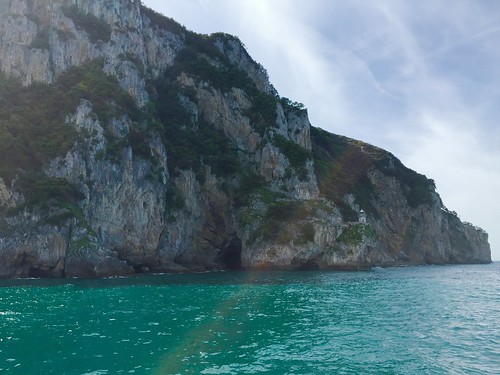 They call this region The Emerald Coast because of the green waters. I'd never seen them quite this green before.

There's a cave there, which, according to the tour guide, is where they put little children who don't brush their teeth and eat all their vegetables. There were at least a dozen passengers under the age of ten. The cave is also a destination for scuba divers. I think I'll brush my teeth and stay out of there, thanks. 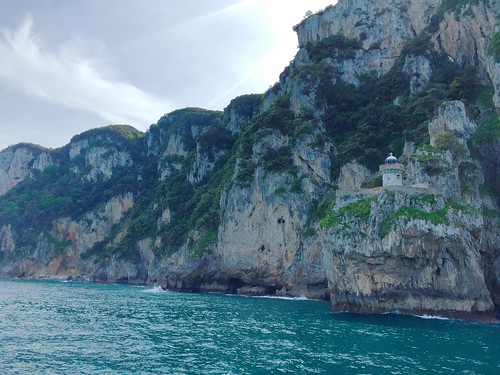 The lighthouse marked the apogee of our voyage. There are steps down to the lighthouse, and we even saw some ambitious sporty person running down the steps. The guide told us that the Global Positioning System has made lighthouses completely obsolete.

A panorama of the mountain. 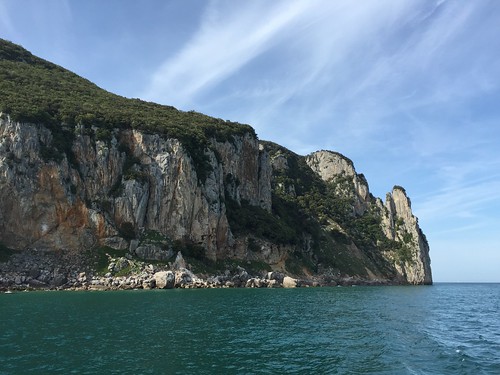 Now this is the angle that I know from all my time at the beach in Laredo and the view from Colindres.

Once we got to about here, the waves all but ceased, and the rest of the ride was extremely enjoyable with the sun on my face and wind in my hair.

I spotted my wife and son from the boat and waved to them. When I hopped onto the dock, there was clearly some concern on their faces about why I was the only one disembarking. Luckily, the ferry back to our car was also there at the dock, so we immediately boarded. The captain ripped up two of our four return tickets – we'll have to find some reason to use the other two – and we were back on the water and across to the beach in no time.

Once loaded up in the car, it was a quick journey to the Red Cross station, where we arrived one minute early to the 6:30-7:00 window I had set up as our rendezvous time. I parked illegally, but luckily we found our sea-weary family members within two minutes. They had visited the tunnel and then had been down by the water enjoying themselves.

Reunited once again, we could finally head home for showers and rest.

Personally, I'm glad that I checked that tour boat thing off my list, but I don't think I'll be boarding it again in the next ten years.