My parents are currently visiting us. One of the gifts that they brought for six-year-old Nora was a little crystal garden. It came in a little box, containing a plastic tray, some colored paper, four packets of clear liquid, and some instructions. Nora and her grandmother followed the instructions and placed the paper in the grooves of the plastic, and then Nora and I poured the packets of "water" into the grooves to irrigate the garden, and we watched as capillary action sucked the water all the way up to the top of the little paper trees and mountain. By then it was about time for Nora to head to school, but the packet said that in the two hours she'd be gone, crystals should begin to grow. I think I saw the first crystal within five minutes. I was amazed at how fast they formed. I swear that I saw one literally pop into existence while I was staring at it. I thought it would be more like watching an hour hand move, where you can't really see any change happen before your eyes, but it was faster than that.

One of the liquid packets got mixed up, and the grass/flower liquid got used on the mountain. We thought that we might get a grass-covered mountain, but we didn't, so, from our mistake, we gained the knowledge that the chemicals specifying the colors of the crystals were in the paper, not the liquid. I also think it's reasonable to assume that, since they included the liquid, it was more than just water.

I set up my tripod and camera to take photos of the crystals. I thought it would be slower than it was, so I set the interval to one minute per frame. So the entire 6.5 hours that I recorded ended up being only 13 seconds worth of video. 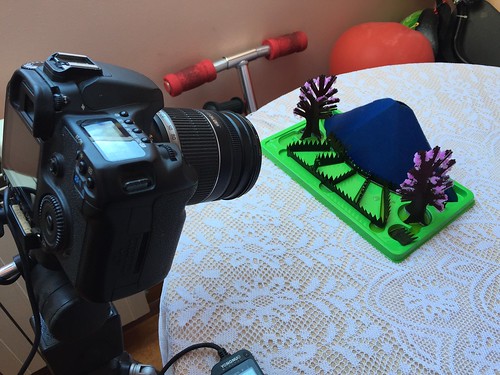 We didn't take much care to reduce flicker or movement, as we just barely kept Little Mister Two-Year-Old from destroying the entire garden. It was left under a window, so it had bright light during the day, and then artificial light when the sun went down. Even so, with such little effort, I'm pleased with the result.

Here are some stills... 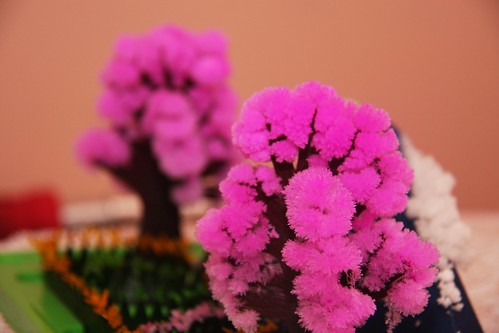 The tree blossoms were impressive. So many grew that some of them fell down. 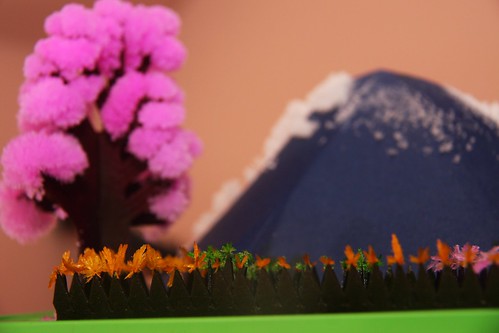 Some of the "grass" bits sprouted green grass, and others flowers. 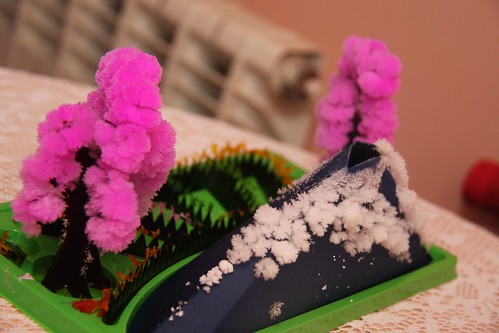 There was more snow on the back of the mountain than the front. Isn't it just like snow to disappoint? 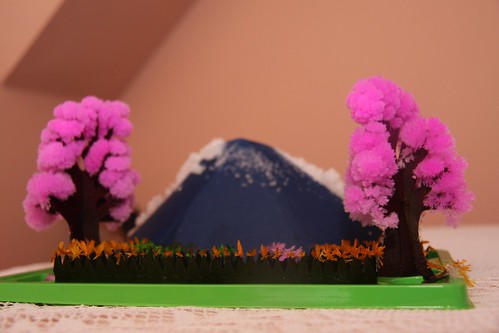 What a cool little project!