State of the Offspring Address - April 2015

With her sixth year firmly under her belt, Nora has had a good start to her seventh. Meanwhile, her adoring and adorable little brother finished his second solar lap in style. Ian continues to babble in increasingly coherent ways. Sometimes when he's bored, he'll test out different sounds, like a child learning to speak. He's already got some good solid English phonemes, like when I say "bridge", he repeats "-idge", which is a sound that's tough for native Spanish speakers learning English.

While the kids were with their mother, aunt and grandparents in Extremadura over the Easter holiday, Ian was filmed saying his first complete sentence in this heart-meltingly adorable video. He says, "¿Gusta, Nora?", which means "Like it, Nora?" Any Spanish 101 student would probably get marked down for not saying, "¿Te gusta, Nora?" Brace yourself for the adorableness...

Pretty good first sentence, if you ask me.

After a completely wrong meteorological forecast made us not do a trip we've been wanting to do, we found ourselves at home on a gorgeous Saturday, so we finally consented to let Nora practice rollerskating. She inherited a pair of inline skates from her best friend, Carmen, who is conveniently two years older than Nora is.

Once we got the skates on her, and we got her upright, holding onto our hands, it quickly became clear that we had no clue whatsoever how to teach someone to skate, as it has been decades since we learned and skated last. Not to worry. We sat her down and I googled "how to skate" on my smartphone, and, like a character in The Matrix that didn't know Kung Fu or how to fly a helicopter a minute earlier, I was now an expert.

Nora has never been very athletic or graceful at running or climbing or swinging, so we had pretty low expectations for her skating abilities, but we were very pleasantly surprised. Within an hour, she was skating back and forth across the school playground holding onto only one hand, and later that same day she managed to skate several meters by herself. She only had one real butt-busting fall, and never fell in a bad way on her hands or knees.

Here she is on the day she learned.

The second half of the video got taken over by Ian, of course. When asked to say, "Daddy, I love you", his attempt sounded an awful lot like, "Daddy, screw you!" Hmmm... If he weren't so cute, he'd be in more trouble. 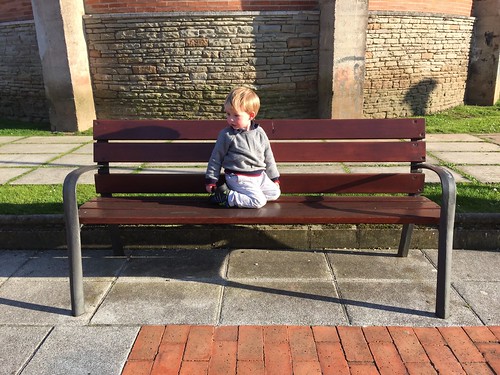 We made our first trip to the beach (a 5 minute drive) this month, and took Nora's _Hello Kitty_™ kite, which proved to be a great success, and a demonstration that an almost-two-year-old doesn't really understand the concept of taking turns. 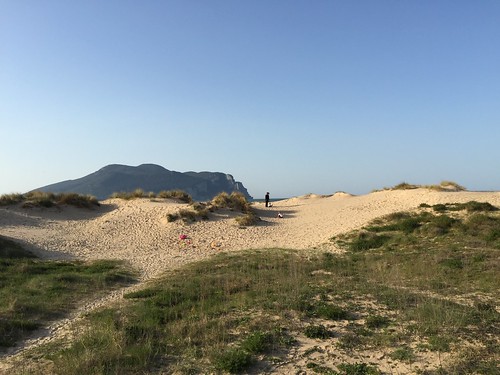 My tribe of sand people. 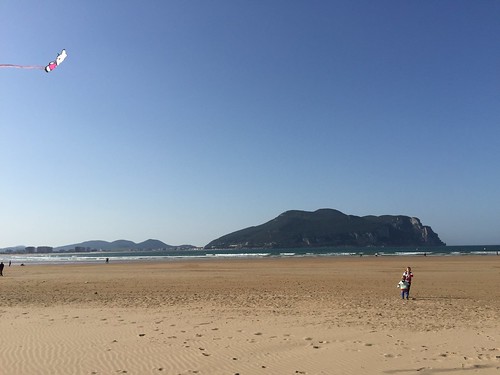 On April 14, I was watching Ian as I do every weekday morning, and he was aping what he's seen his sister do, and had a pencil and some pieces of paper. It looked like he was trying to draw circles. I was on the phone with my wife at the time, and I commented to her, "Ha! Ian is using a pencil and it really looks like he has just written 'n' and 'o'. If he writes an 'r' and an 'a', I'm going to flip out!" I watched as he moved a little right on the paper and made another glyph. No way! It really looked like an 'r'! I'm commentating this the whole time to my wife. The suspense was high as he set pencil to paper for the fourth time... THere's no way he'd write an 'a', right? Not a chance! When he did, the crowd [of one] went wild! I think I may have frightened him a bit. Being the reasonable person that she is, my wife didn't believe me at first, but then I sent her a photo, and she was amazed!

Behold, my 23-month-old son wrote his sister's name, in lowercase, even! She's six and can't even read lowercase yet!

This is, of course, an excellent example of pareidolia, which is defined as, a psychological phenomenon involving a vague or random stimulus which is perceived as significant. Like when songs are played backwards and people think Elmo is saying "go kill your neighbor's dog, Thomas!" or something. The only significance in what he wrote was placed on it by my overly-excited pattern-matching brain.

Still, it was a funny incident.

Nora had her first sleepover / pajama party this month. She and one other friend went to a third friend's house to spend the night. Apparently they had to be told at 1am, several hours after lights out, that they needed to be quiet and go to sleep. Nora informed me that she and her talkative friend had decided, "Hey, let's just stay up all night long talking!" 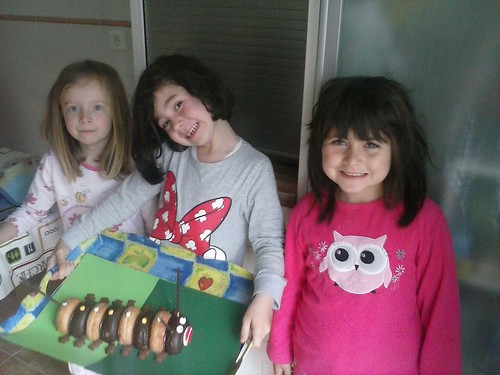 They had a doughnut centipede for breakfast the next morning. The party was a complete success.

Conquering the Neighborhood with Love

Ian's open personality and charisma continues to open doors for him. I take him every morning to the grocery store after dropping Nora off at school. It's a family owned (they are all siblings) store across the street from the school. When Ian walks in, he immediately showers Hola's on everyone. At last count, they have 1.2 billion nieces and nephews, so they are all good with kids. Ian is particularly fond of Leti, the woman who works in the cured meats and cheeses section of the shop. He shouts "¡Tetiiii!" whenever he sees her and runs into her arms. One day this month, she had the idea to put some safety glasses on Ian. They fit perfectly. 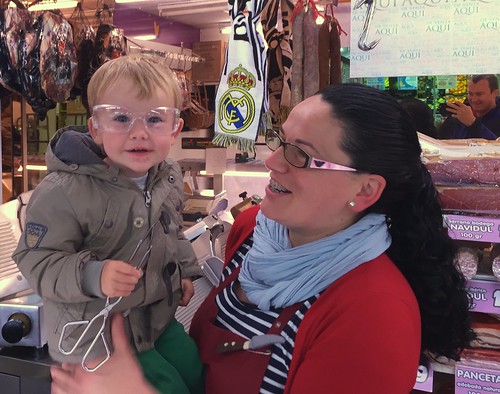 Ian and Leti. (proud dad photographer in the mirror) 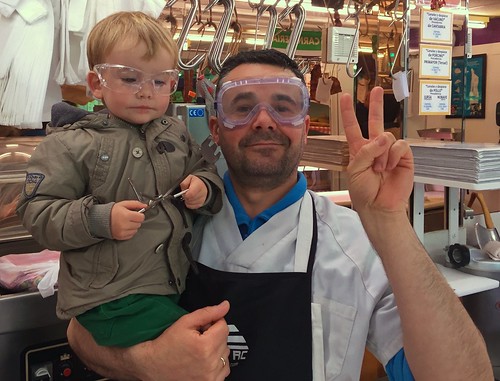 Bruno, the butcher, put on his glasses, too. 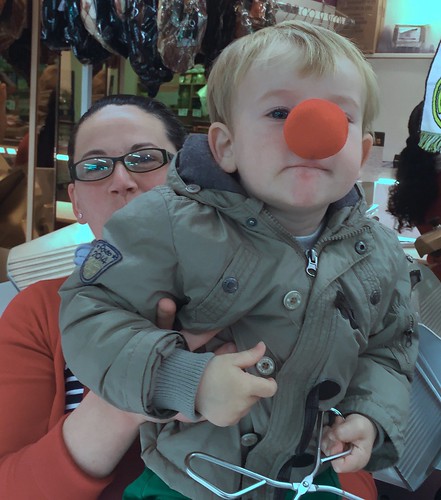 Then, Leti broke out a clown nose that Ian had no problem donning. 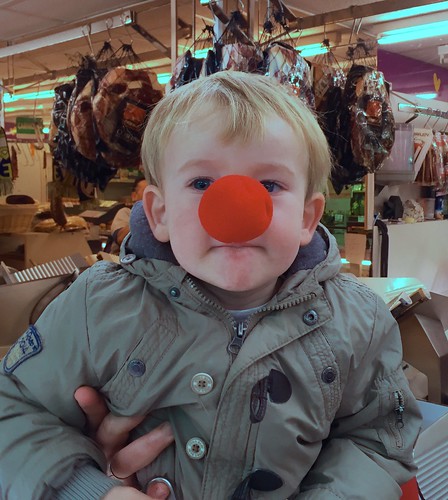 It did seem to force his mouth into this closed frown.

Ian knows all the regulars that come to the store at that time of the day. One of them is a local grandfather, with two granddaughters that he takes to school, named Nando (short for Fernando). Whenever Ian sees him, Ian shouts, "¡Nando! ¡Pan!" and Nando dutifully goes to get his daily bread and break off a ginormous chunk to give to Ian, who says, "¡Gacias, Nando!" 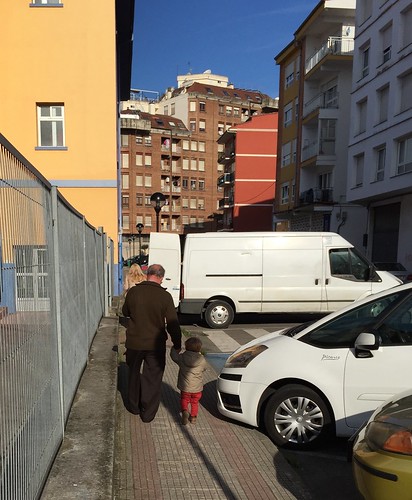 Several times this month he has walked home (Nando lives a little past our house) with Nando, hand in hand. With the love and attention he gives to people, it's no wonder that he has so many friends at such a young age. What a lovely child, and a lovely man Nando is for assuming the grandfather role when Ian's grandparents aren't around.

Nora lost her second tooth this month. It was the incisor neighbor to the first tooth lost that was reported as "loose" on the day the first one was left for the Ratoncito Pérez, the Spanish rodent tooth fairy. This time, however, she left a note asking the rat to just bring her candy and money and not take the tooth as payment. Personally, I would never have consented to such an affront to free market capitalism ("Transactions don't work like that, young lady!!"), but I wasn't involved in either the letter writing or the mouse's actions. As with many such parenting mountains, it turned out to be a molehill the next morning which was the last time she seemed to care where the tooth was. 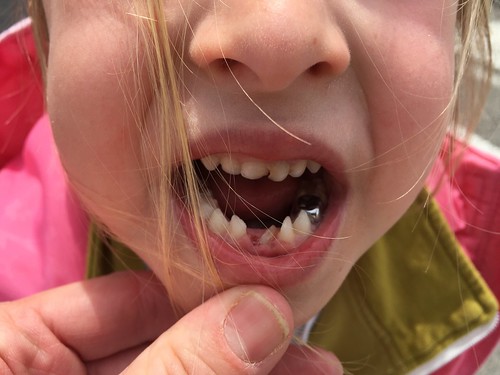 As you can see, her permanent incisor is right there trying to jostle for a place. This girl has some orthodontics in her future. 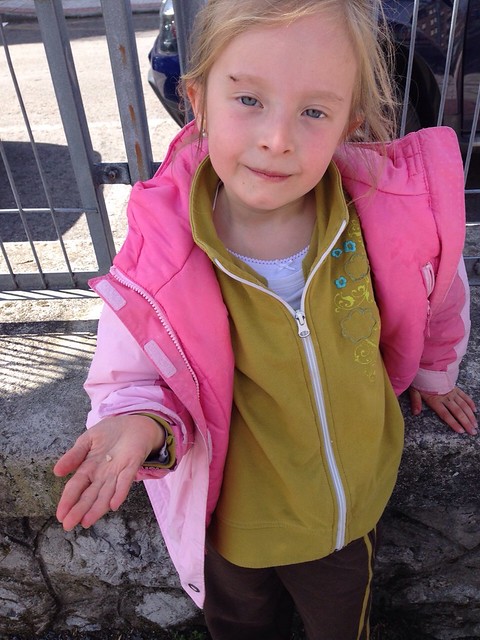 Proud girl on the playground right after it fell out. Her eyebrow continues to heal, but it's too early to tell how much scarring there will be.

Here's a little clip of how Nora and Ian play together at the park by the church. I think this might've been the first day that Ian figured out how to go down the slide on his belly. Make sure your volume is at a reasonable level, as the church was pretty excited. 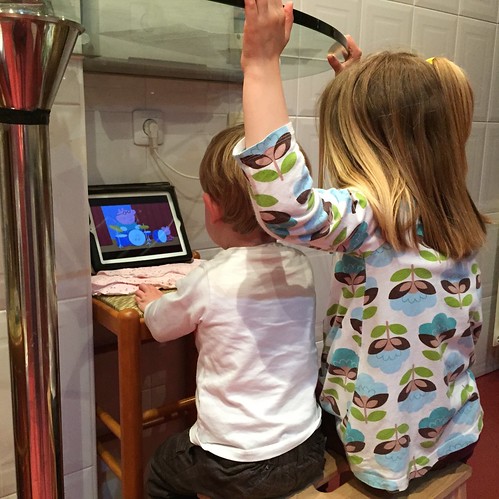