For the past three days, my wife has worked super-mega-overtime to the point where she has gone to work before the kids get up and returned home after they are in bed every single day. So it was important that today, we all spend some time together. We've learned that we can't do that at home. If we try to spend time at home, there is always something that an adult could be doing – e.g. ironing, cleaning, cooking, etc. – that we end up saying, "You watch the kids while I go do this other important thing." Going on a day trip as a family is the best solution to actually making us interact as a foursome. It's been way too long since we've visited the nearby village of Santoña, which we can see right across the bay every day, but don't often go to visit.

I'm going tell you guys a super-duper special secret, okay? The first rule of La Taberna de Alberto is that you don't talk about La Taberna de Alberto. Got it? We heard about it from one of my wife's coworkers. There's this little pedestrian crossroads called La Plaza del Paralvillo, in which you will find a dizzying array of maybe five or six bars all with tables and chairs set out to entice a weary tourist to sit down for a glass of wine and a ración de rabas (a serving of fried calamari, a local delicacy). Seriously, have a look around.

On the most unassuming corner of the square is a tiny little sign that says "Taberna Alberto", and the entrance, which any normal person would walk right past is around the corner from the sign.

When you walk in, you are immediately struck by what a filthy shithole the place is. It looks like they haven't mopped or redone the floor tiles since Franco was in power. One wall was completely lined with decaying cardboard boxes. The space was tiny, but it was absolutely packed with people. As any seasoned gastronaut traveller will tell you, these are the signs that you are about to experience something truly authentic. 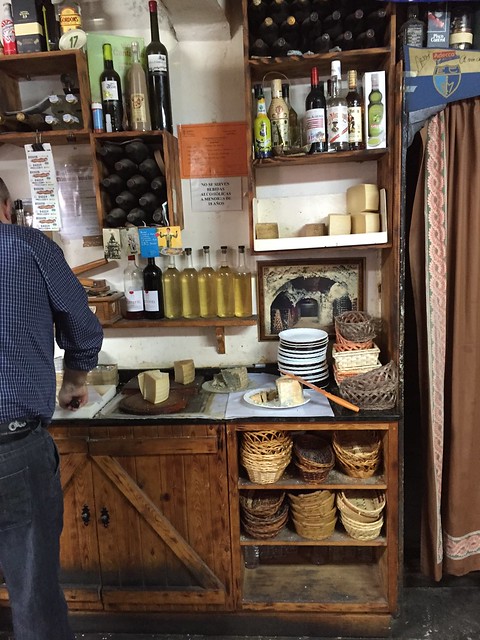 When confronted with the menu, we glanced behind the bar and saw a selection of cheeses at various stages of rot deliciousness, and decided to go for the Queso Manchego Curado and a pair of Rioja crianzas. 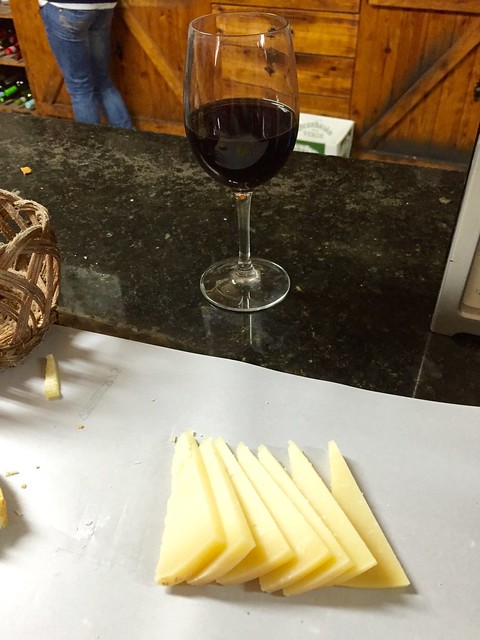 The full "deck" was slightly more slices, but the kids were hungry. 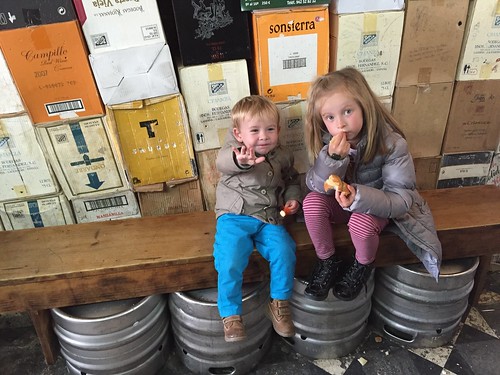 The kiddos atop some kegs and the wall of cardboard wine boxes. You can see a dropped slice of cheese there. Normally I'm pretty liberal on letting them recover dropped food, but not from this floor! 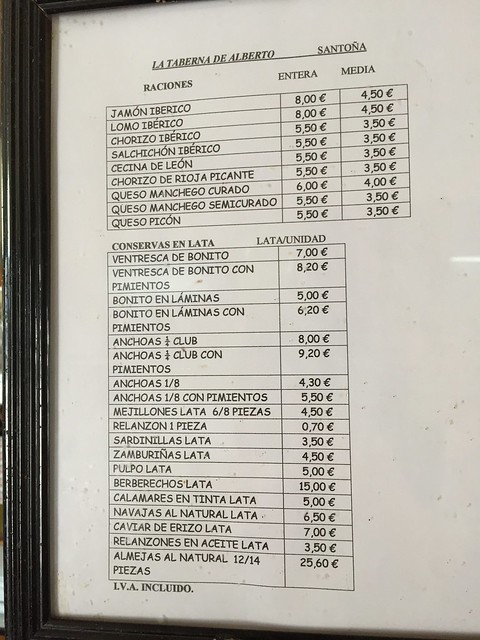 I can't wait to go back and explore more of the menu. It's not cheap, but the service was extremely attentive. The bread in itself was amazing. I've found the quality of bread served with food in Spain to be an excellent canary in the coal mine mixed-metaphor litmus test for gauging how much attention to quality will be paid for the rest of the food.

A panorama behind the bar. Worth exploring in more detail to get a feel for the cheese loving filth of it all.

Can't wait to go back. Don't tell anyone!

While we were manchego munching, we got a text message from our friend Elena asking what we were up to. I sent her the photo above of the cheese and the wine, with no extra context, and she said, "I'll be right there!" Fifteen minutes later she arrived. 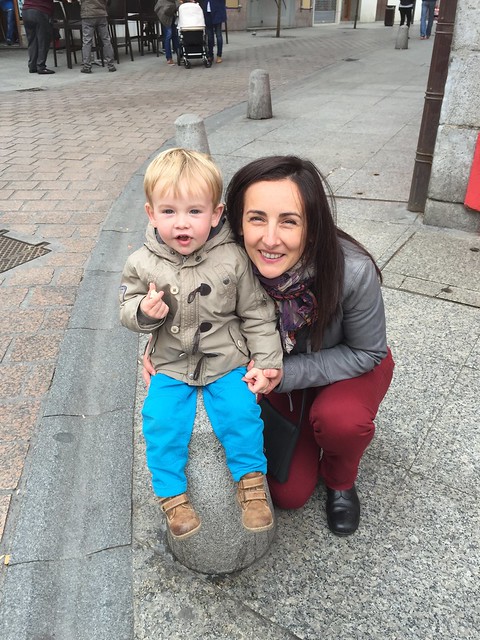 Sitting on bollards, waiting for Elena to show up.

We know almost nothing about Santoña, so it was nice to have Elena there to tell us the best places to go, and she found us some great places to continue our Tapas Sunday. 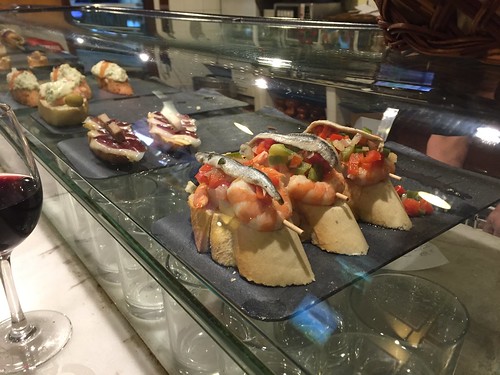 We didn't eat any of these tapas. At this place we had albondigas de verdel (mackerel meatballs). Fantastic! 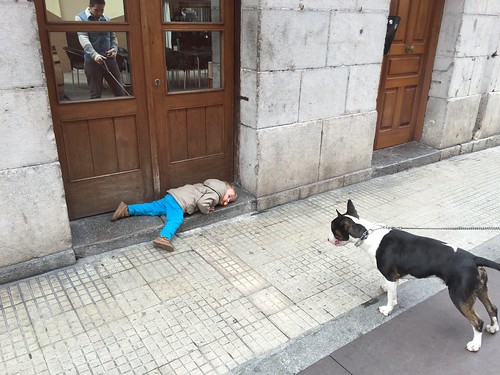 Ian decided it was nap time, despite a threatening canine, no doubt offended that the curb he'd just marked as his own was being audaciously occupied by a sleepy primate. 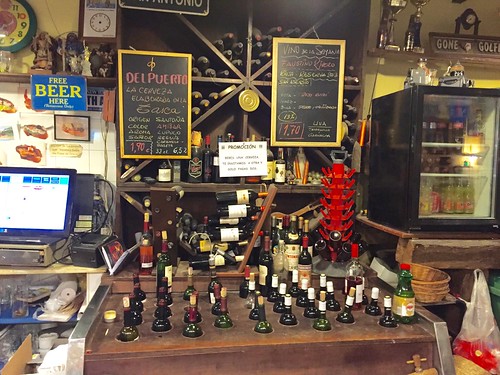 I love the design of some of these places. This one has a sign that says, "Order one beer, and get the second free; you only pay for two!" It's accompanied by the slightly less clever English version, "Free beer here. (tomorrow only)" sign. 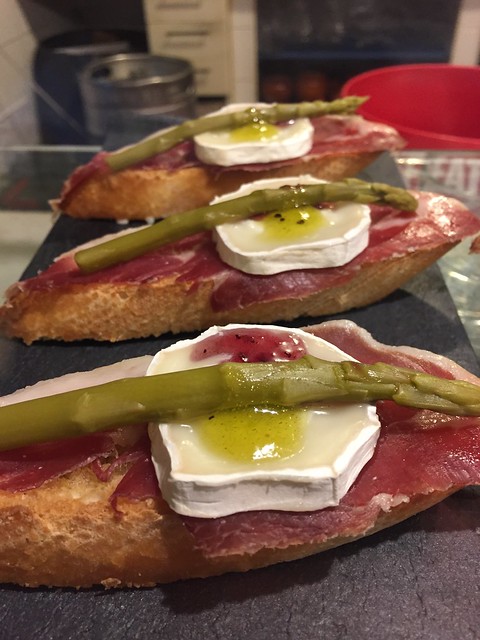 Another intriguing concoction that I saw but didn't eat: toast topped with Spanish cured ham, goat cheese, asparagus, and what looks like, from the seeds, kiwi and strawberry sauce. 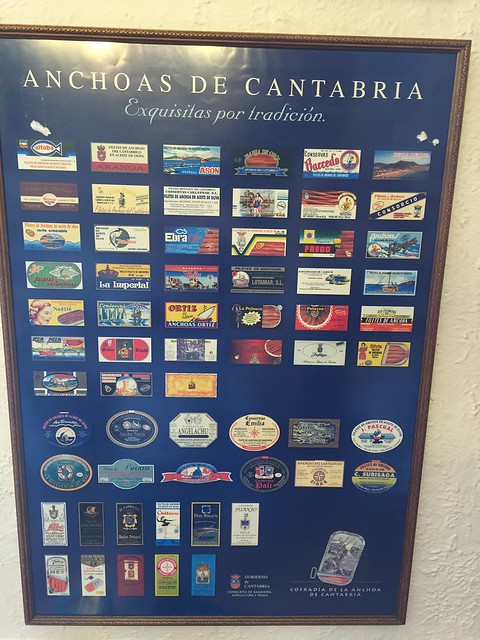 Santoña is famous all over Spain for being "that place where all the good anchovies come from". My wife's employer is at the bottom left. 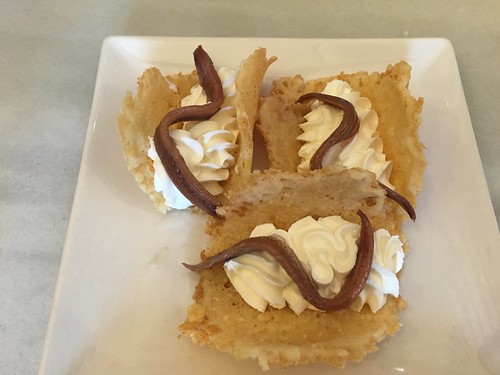 This was the end of our tapas train. Cheese shingles (like the U-shaped terra-cotta grooves of Spain) with some sort of cream cheese, definitely "goatier" or "bluer" than Philadelphia™, topped with an anchovy. It was such a bizarre culinary invention that I'm glad I tried it, although it seemed to have a billion calories, but it was my least favorite thing I ate all day.

With our sufficiently satiated bellies, we decided it might be time to walk the length of Santoña's beautiful maritime walkway. The wind was pretty cold, but the sun came out a bit and made it a lovely afternoon. We were right at high tide, with a new moon the day before, which always makes sea walks around here more photogenic.

Worth checking out the full-res version. 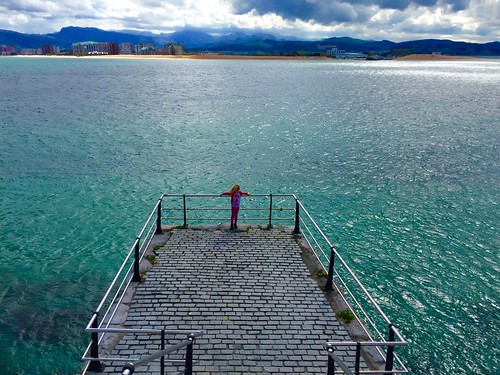 "Hey, Nora, go down there to the end of that platform so I can take your picture!" 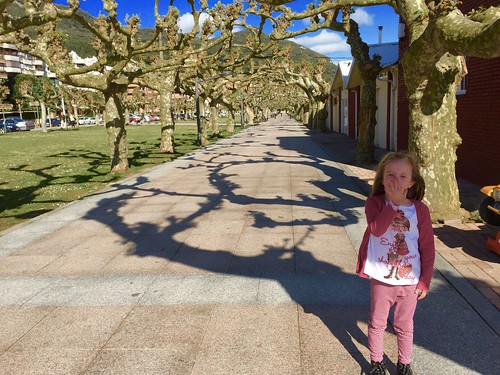 So many parts of Santoña are lovely! 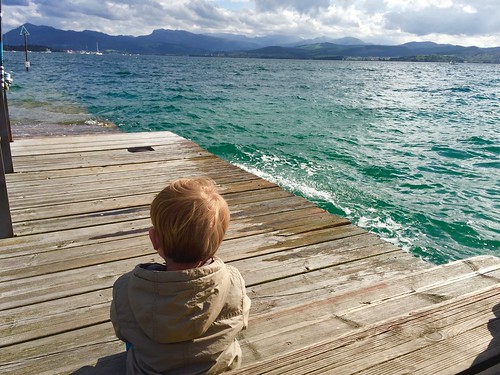 What a wonderful afternoon. I mean, who couldn't spend hours staring at this?