On a previous post, I mentioned a list of parenting vocabulary that I had never had the occasion to learn in Spanish until becoming a parent. When my daughter, Nora, was about two, either through some cartoon or a stuffed animal, she and her Spanish grandparents began talking about el Ratoncito Pérez, and every time Nora saw anything resembling a mouse, she would exclaim that name. At the time, I had no idea what that name meant. What's funny is that it had become such a part of our lives that exactly four years ago this week, I was moved to snap a photo of this Wheel of Fortune puzzle to show my family. 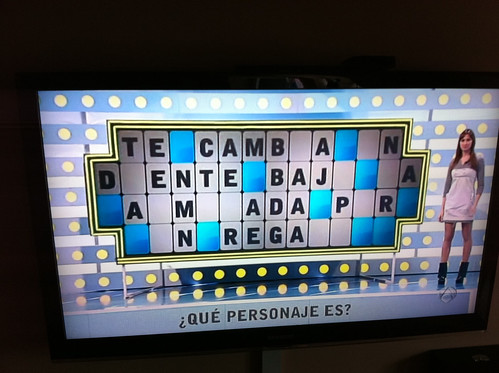 "He exchanges a tooth under the pillow for a gift." 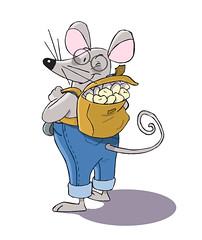 From what I can gather, there is really not much more to the Ratoncito Pérez myth than there is to the Tooth Fairy myth; it's pretty much what that Wheel of Fortune puzzle says. The fleshing out of the now accepted rodent myth is widely credited to a children's book author, Luis Coloma, in the late nineteenth century.

From what I can tell, the Tooth Fairy myth came after the mouse version, showing up in the early twentieth century. Personally, I find the idea of a dental pack rat much more plausible than a flying miniature human, since mice actually do steal small items from humans.

As you may have guessed, Nora lost her first tooth on Friday the 13th last week. It had been wiggling around for at least a fortnight, and it had been moving a lot that morning. When I took her back to school after lunch, I said, "How's the tooth, and she moved it to the point where it bent all the way down and the root popped out. She was thrilled! After I took the photo you see below, she immediately turned to her classmates with a big grin and asked if they noticed anything different about her. She got to bring home a special Ratoncito Pérez stuffed doll from class for the weekend.

That night, she wrapped the tooth in a bit of toilet paper and put it under her pillow. The next morning, she woke up to find five one euro coins scattered across her bed (she's a restless sleeper). After she finished counting them for the tenth time, I asked her what she was going to do with her newfound wealth. She looked at me like I'd asked a ridiculous question and responded, "Put it in my hucha (piggy bank), of course!" She is her mother's daughter.

After making her porcine deposit, she immediately began trying to wiggle the remaining teeth. There's gold in them thar hills! 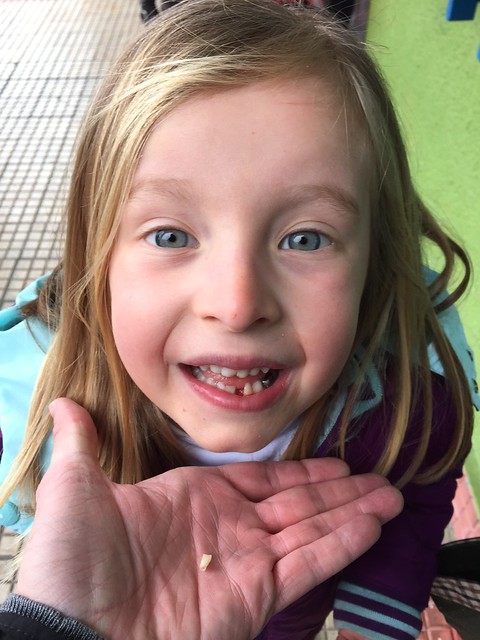