If you ask any avid golfer to name the three most famous courses in the United States, chances are very good that they will name Augusta National, Pebble Beach, and Pinehurst No. 2. The second course at Pinehurst was designed by famed golf course designer, Donald Ross, who studied under The Father of Golf himself, Old Tom Morris, in St. Andrews, Scotland. The course has risen in prominence over the past two decades as the host of the U.S. Open in 1999, 2005 and 2014. My friends and I, who have done golf trips roughly every five years to places such as St. Andrews, Scotland and County Kerry, Ireland, planned to revisit St. Andrews in 2015, but a combination of losing the lottery to get a tee time on The Old Course and the birth of twins to one of the participants delayed that trip, so we elected the easiest trip to an important golf location, one only three hours drive from where I grew up and one hour away from where I went to school, in the Sandhills of North Carolina. 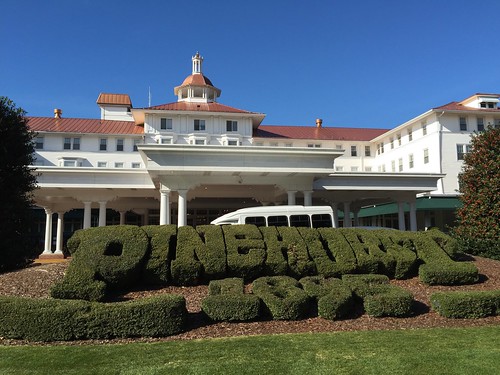 Everywhere you go at the Pinehurst Resort, they make it very clear that it was established in 1895. 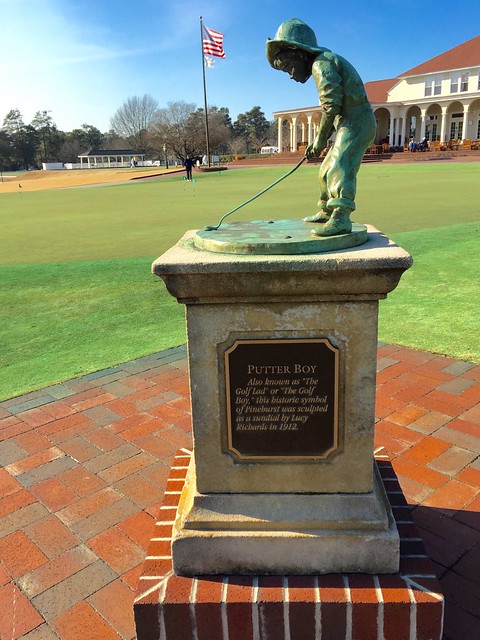 The logo for the resort is the Putter Boy, who has a putter that is more like the length of a driver. Several times when I saw the logo, it looked more like the Mannekin Pis than a golfer.

It's pretty rare for me to experience even a taste of what the life of a rich person must be like, e.g. valet service, bellhops eager to please, a $14 jar of cashews in the room. The Pinehurst Resort had a very strong "old rich white people colonial plantation" vibe; the only black people I saw were in servant roles. There were several pristine croquet courts with old white people dressed all in white playing on them.

For dinner, the day of our arrival, we went down to the Ryder Cup Lounge. 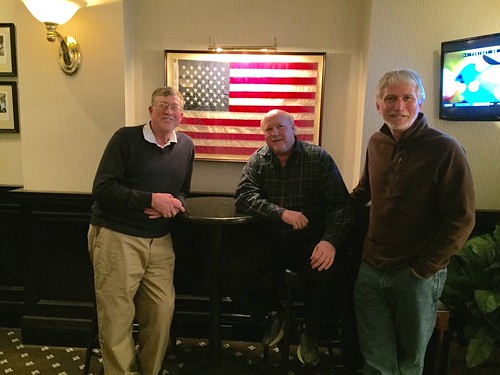 My friends, Paul, Jeff and Phil, posed with the American flag to the right of the entrance... 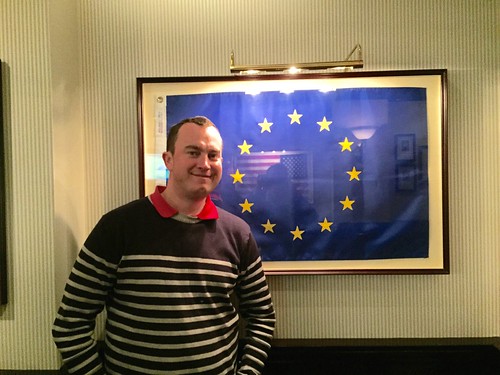 ...and I with the European flag to the left. 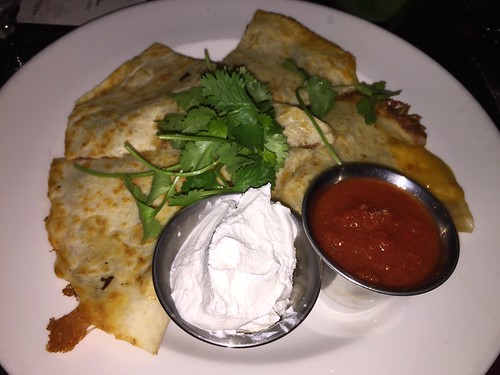 I ordered the Pulled Pork Quesadillas, a lovely combination of Carolina barbecue and Tex-Mex cuisine. 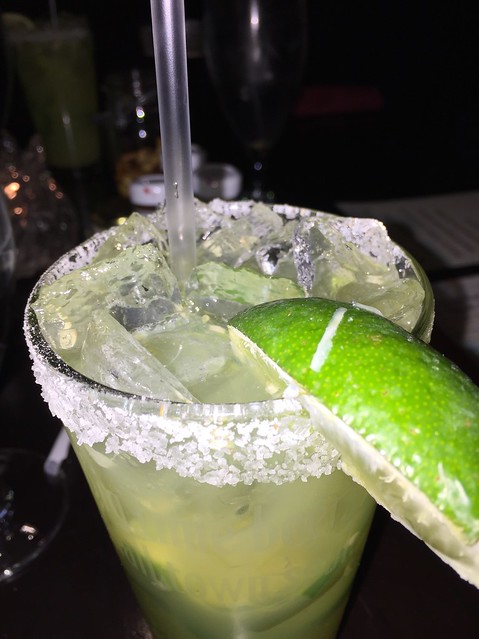 Phil and I dared to order a Jalapeño Margarita, which was spicy as hell! It should be served with a tub of Vaseline™ to soothe your upper lip. 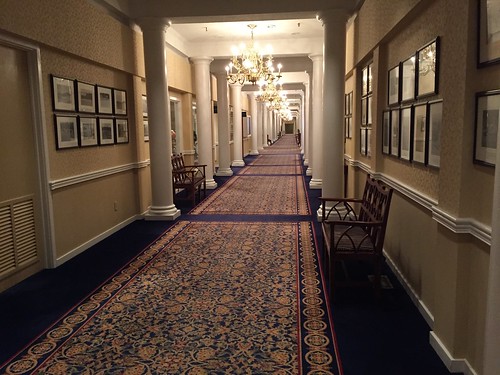 After dinner we wandered the hallowed halls, examining the photographs of every golf legend you can imagine, from Hogan to Palmer to Nicklaus to Tiger. Almost more interesting were the photos of the bizarre exploits of the rich white folk from the early 20th century, including women in white skirts racing pigs on leashes through muddy obstacle courses and little fat boys on horses trying to eat dangling donuts. 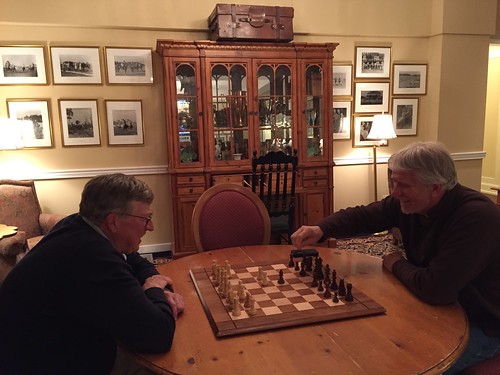 Paul and Phil sat down for a chess match. 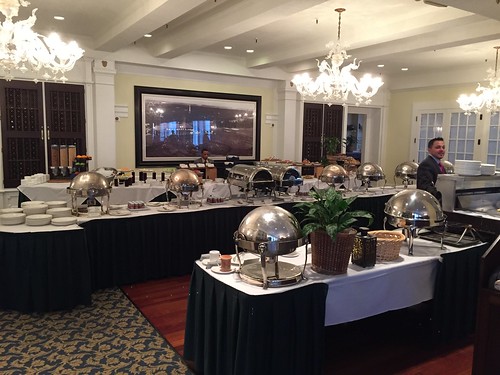 The following morning, we went down for the breakfast buffet, which featured sterling silver platters of all the southern fixin's: sausage, grits, biscuits and gravy, bacon, scrambled eggs, omelets, and even smoked salmon. In the back there, you can see a man playing some jazzy tunes on a grand piano, as any rich person would expect during breakfast. 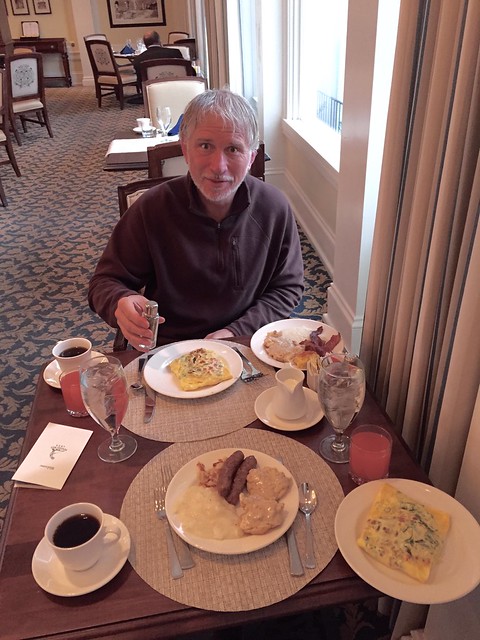 My roommate and breakfast partner, Phil, ready to tuck into some morning calories. 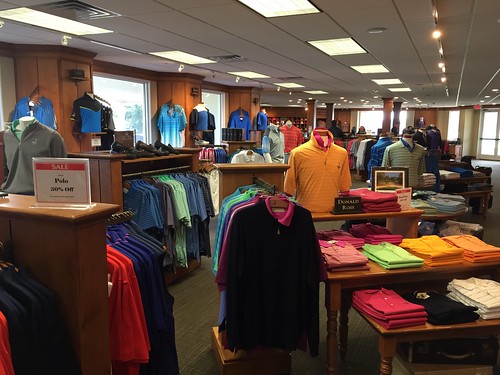 The pro shop at Pinehurst No. 2 had a lovely selection of $100+ golf shirts. 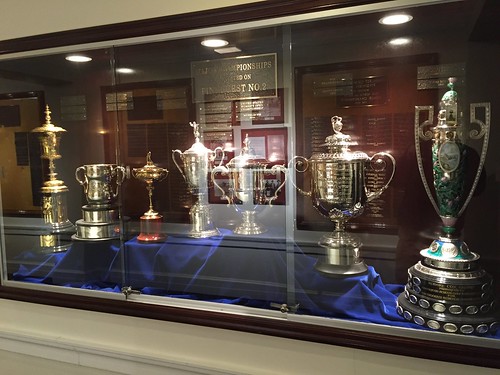 Some priceless golf trophies; the left middle one is from the U.S. Open, I believe. 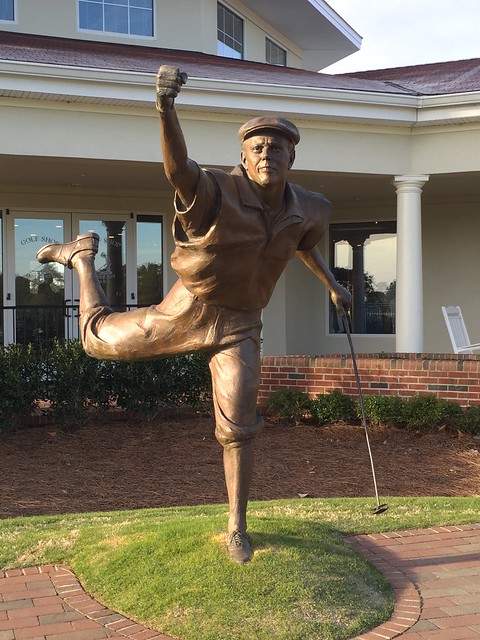 A fantastic statue of Payne Stewart, the 1999 U.S. Open Champion, who tragically died in a plane crash later that year. Not the first bronze statue of him I've seen. 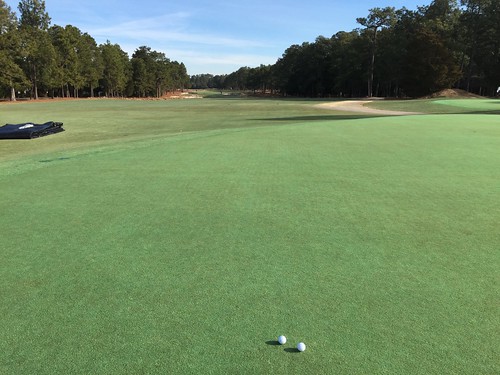 Practicing putting before the first hole at Pinehurst No. 2. The greens were flawless. The greens on the course had all been redone since last year's 2014 U.S. Open. 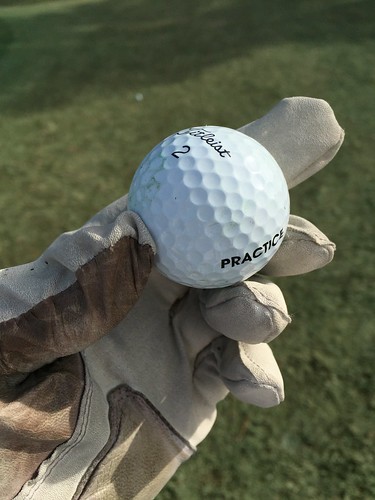 The practice balls were Titleist Pro V1s, one of the most expensive golf balls around, which retail at over $5/ball. The 1% lives well! 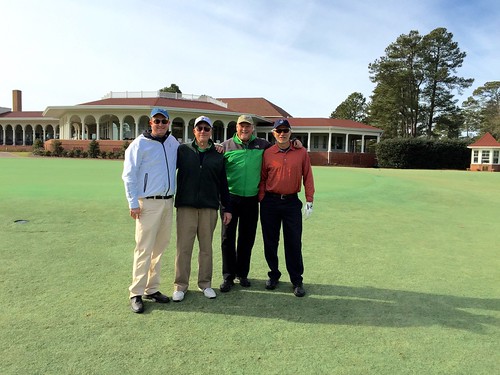 Ready to begin our round! 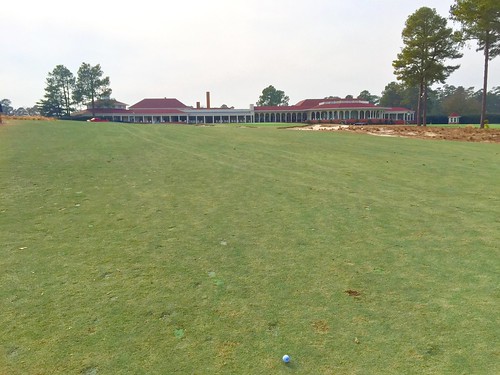 This was my drive on one of the most iconic holes in golf, the 18th at Pinehurst No. 2, with the extremely recognizable arches and pillars of the clubhouse backing the green. I've played this hole dozens and dozens of times in golf video games. 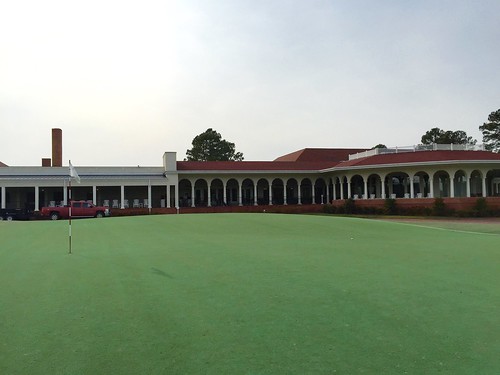 I hit my shot on the green and just missed the birdie, for the tap-in par. I was hoping for at least one spectator to set down their sweet tea or lemonade and applaud from the porch, but alas, all the rocking chairs were empty.

I had mixed feelings about the course itself. Because I grew up playing a course near my grandparents' house an hour away, also in the Sandhills region of North Carolina, the terrain was very familiar to me, and not all that special. Probably the oddest thing about the course is that there is no rough. It goes straight from fairway to "waste area", which consists of hard packed sand with little tufts of grass. As a result, missing the fairway resulted in very little penalty, as the waste area was pretty easy to hit out of. Where the course really got you was on the Donald Ross domed greens, which have steep slopes on every side. If you miss the green by just a little bit, then the ball rolls off and down the hill, leaving a chip that is also hard to keep on the green. I may have called Donald Ross a few bad names during the course of my round.

Here is a little video I made of some of our shots on this famous course. It was a lot of fun! I'm glad we went. Unlike our trips to Scotland and Ireland, however, I'm not dying to return.