State of the Offspring Address - December 2014

Yet another calendar year is coming to a close. The offspring are doing well. They have been at their grandparents' house for the past week, enjoying the Christmas festivities. Nora has totally bought into the magic of Christmas and Santa Claus and the Magi Kings. It sounds like they talk about that a lot at school. She has not even a sliver of doubt that the myths might not be 100% true. Occasionally she will ask how Santa Claus can do X or Y, but we feign ignorance or defer to "magic", and that is more than enough explanation. 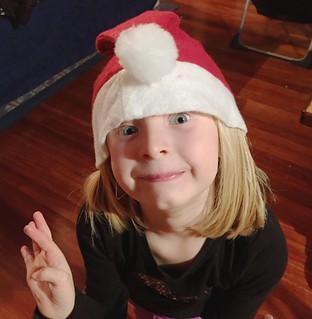 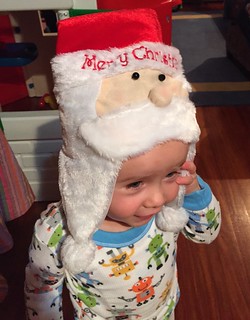 Ian did not want that hat on his head.

One day this month, Nora came home from school and asked me to cut some pieces of paper, fold the pieces, and draw a heart on the front, because she wanted to make some cards, "like a valentine, but not". She's not usually that excited about drawing things, so this was a welcome turn of events, and I happily complied. I was later asked to address them. 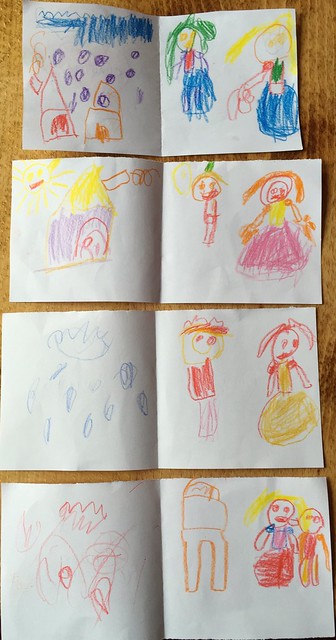 From top to bottom, they are for Claudia, her best friend at school, Elias, an older boy at school, Viky, her teacher, and Hugo Urrutia, the charismatic leader of her kindergarten class. Every day after school, I get to hear about what hijinks Hugo got up to, which girl he prefers now, and what strategies the various girls have for winning his attention. The kid's a heartbreaker.

She gave me some explanations about each one, but I've forgotten. It seems to be raining in most of them, which seems reasonable given the rainy Cantabrian winters. 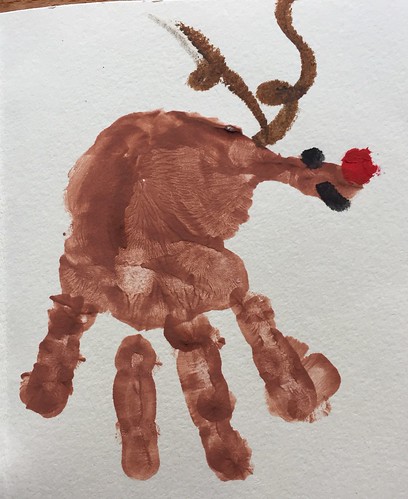 When I first opened this Christmas card from Ian's daycare, I thought, "Oh, they made a mistake and put his handprint upside down", but then I realized that it was a reindeer! How clever! All those years making Thanksgiving turkeys as a kid, and I never realized that you could turn one upside down and make a Christmas animal.

I cannot think of a single new word that Ian learned this month. I'd like to think that he's working more on his pronunciation. He will repeat back the last few phonemes he hears. For example, if you ask him, "Would you like to go on vacation?", he might reply, "'cation." It sounds like he knows lots of words, if you're a doting grandparent, but it's a bit like talking into an empty cave.

Nora hasn't advanced too much, either. The biggest hurdle that I want her to cross is to understand numbers. To her, numbers are things you can count up to. She knows that 20 is more than 5, and that 100 is more than 20, but she has no concept of the relative distances between those values on the number line. It's a bit like those tribes that only have "one", "two" and "many". There are so many (> 2) things I'd like to talk to her about, but we can't get there because this epistemological stepping stone is still too wobbly to support our weight.

Fever all through the night 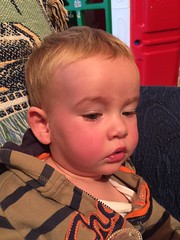 We've all been a little under the weather this month. Ian was feverish for about a week, and he got his sleep patterns all messed up. He would take long naps during the day, which we would not want to wake him up from, to let his immune system do its best, but then he wouldn't want to go to bed at bed time. There were a few days where he would go to bed at 3am, and then be back up at 5am. Since my wife has to get up early for work, and I don't, the night shift usually falls to me, but then I got sick too, and was just too run down from getting 2-3 hours of sleep a night for several days, and there got to be a time when I just couldn't go on. I had to call my wife at work and ask her to come home, and then my in-laws came that afternoon to take some of the night shift. 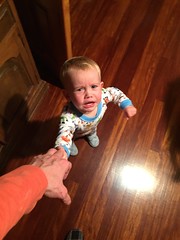 Thankfully, Nora is so awesomely independent that she can go to school all by herself now when she has to, like when Ian is sick, so she was a great sport during the hard times. Later that week, with my in-laws helping, there was one night when Ian didn't go to bed until five in the morning! His grandmother had him until midnight, then I had him until 2:30am, and then his grandfather got up to take the 2:30 to 5am shift. It was brutal.

I have no idea how single parents do it. Or even double parents with no reinforcements. One child had us both out of work.

Since then, Ian has recovered fully, but this past week, Nora has been a bit feverish, but not feeling too terribly.

It's been a long month.

Remember how we finally got Nora to go to dance classes last month? Well, they had their exhibition this month. It was better than one might expect from a five year old with only six weeks (12 hours) worth of training. They were mostly just aping the teacher who was standing in front of them, but, I mean, what more could we expect?

There were three performances, complete with costume changes, the final performance being with all the dance instructor's students. Unfortunately the venue, the local sports gym, wasn't the best place for such an event, but it's what we've got available. The place was packed.

Nora is mostly on the left. Sometimes she has to go all the way to the end to get out of everyone else's way.

It was over 90 minutes of watching other people's kids dance badly, which I found pretty boring, but I entertained myself by spying on what my own daughter was doing during the other performances. She was one of the only ones in her group that seemed to be practicing dance moves.

You may have noticed that I titled this section plurally. That's because she had yet another dance exhibition with her kindergarten at school, performing Mariah Carey's Christmas classic. It was pretty darn cute. See if you can pick out which boys aren't good rule followers.

This was just half her class; the other half did another song separately.

Ian got some new waterproof boots.

One Sunday this month, I took the young'uns to the park, and Nora found that a neighborhood girl had mounted a little beauty salon in one of the playground structures. Nora didn't exactly ask my permission, but she did come up to me and say, "I don't know this girl, but I'm going to get my nails painted," which was a nice way of running it by me in case it needed a parental veto. 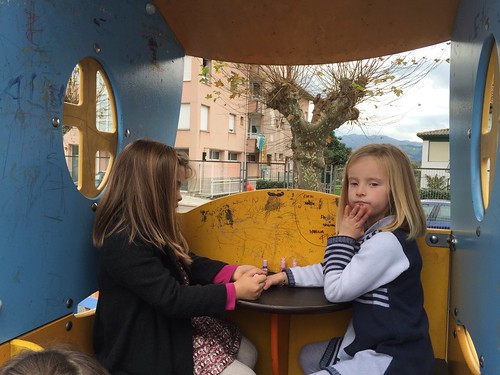 Who knew that there was such a thing as fake "toy" nail polish that washes right off? 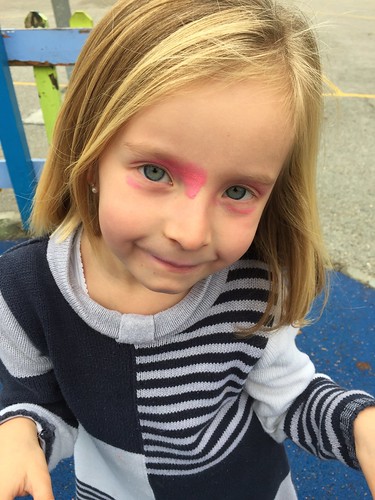 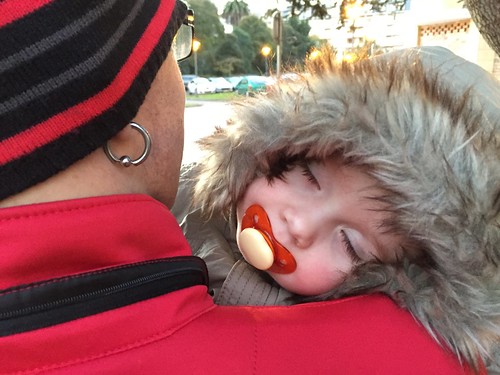 Both Ian and Nora are pretty big fans of their Aunt Belén's boyfriend, Unai. Here, Ian fell asleep on his shoulder. 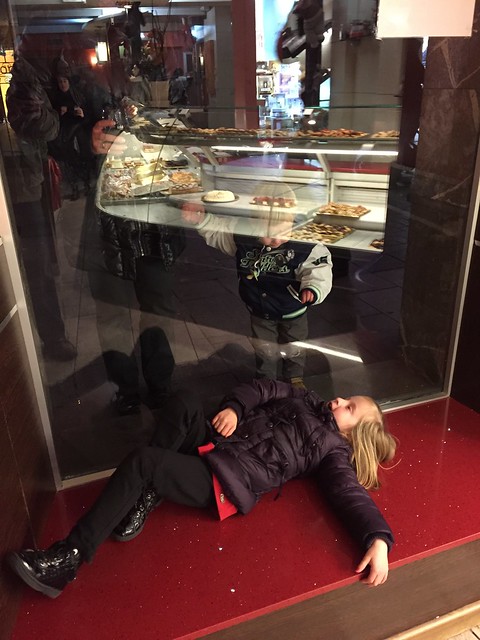 Ian and Nora on different sides of a bakery shop window. 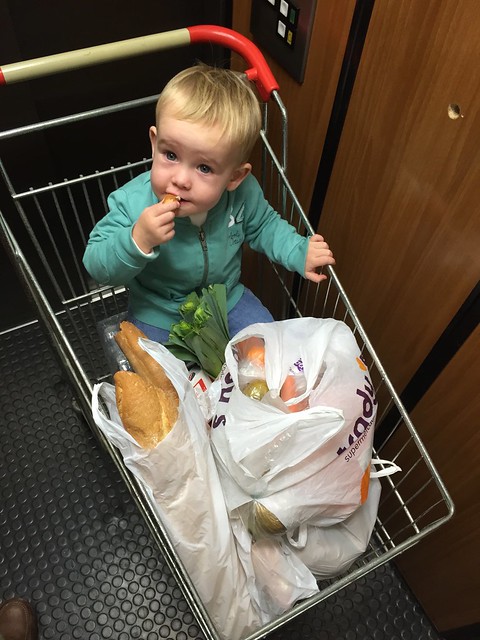 Ian had to help me with the shopping one day. 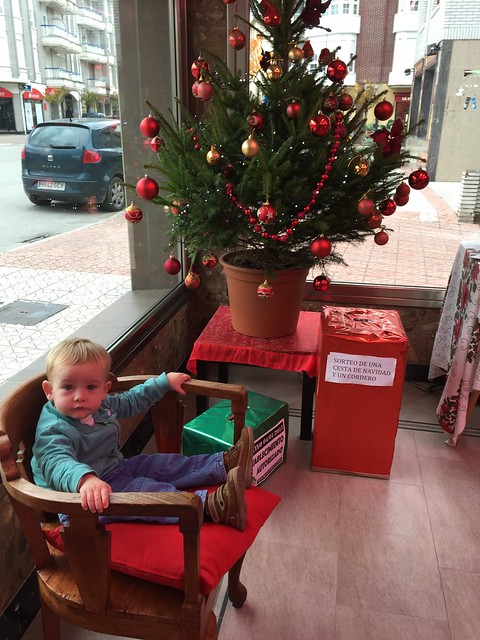 At a local butcher shop. 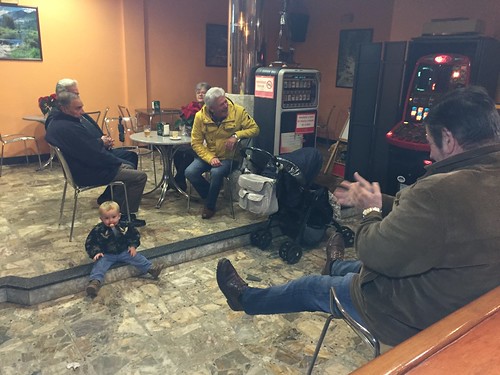 One evening, while out with his father and grandfather for a couple wines, Ian got to playing with this stranger in a bar, mimicking each other's actions. 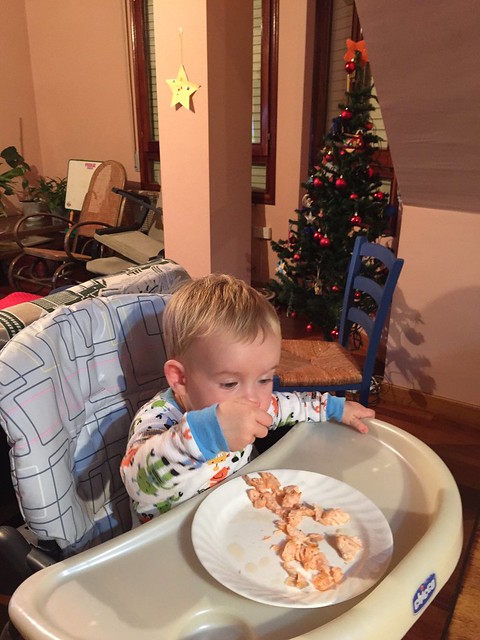 Eating salmon. Ian is a really good eater, although he now refuses to be fed anything. He demands to operate the utensils.

For Christmas, as usual, we went to my wife's hometown of Mondragón. We followed the Christmas Eve parade a little, where the Olentzero (the Basque version of Santa Claus) paraded around and threw hard candy at the children. Nora did some sort of Olentzero letter writing and submission exercise with her Aunt Belén. 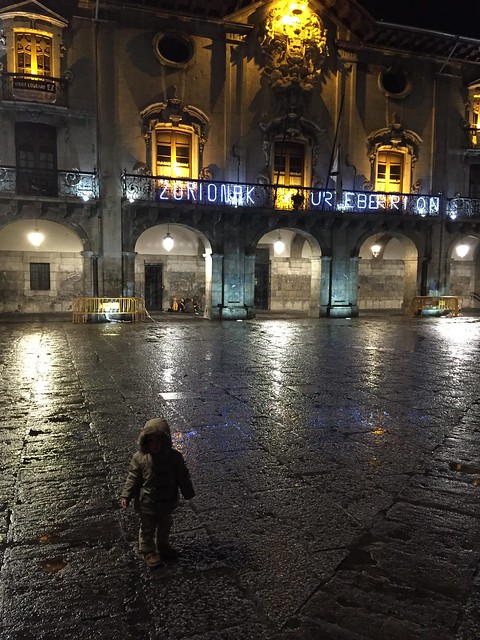 Ian doesn't really get Christmas yet, but Nora was extremely excited. When she woke up on Christmas morning, she was ecstatic. 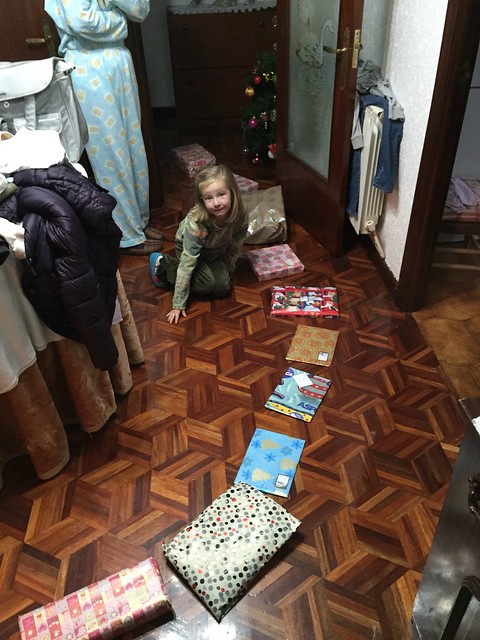 The "strewn presents" is a new tradition, started a couple years go when Nora was fantasizing about there being "so many presents that the pile goes all the way from the Christmas tree to the bedroom door!" Each adult received a present, Ian received several, but Nora took the lion's share. Ian received a xylophone, an item that Nora had been asking for. Nora received some Heely's, a type of sneaker that has a wheel on the bottom and doubles as a roller skate. Ian got some nice shoes, and a little car set. Nora got a book and some dolls. I got a sweater and Marga received a purse. All around, it was a pretty good haul. 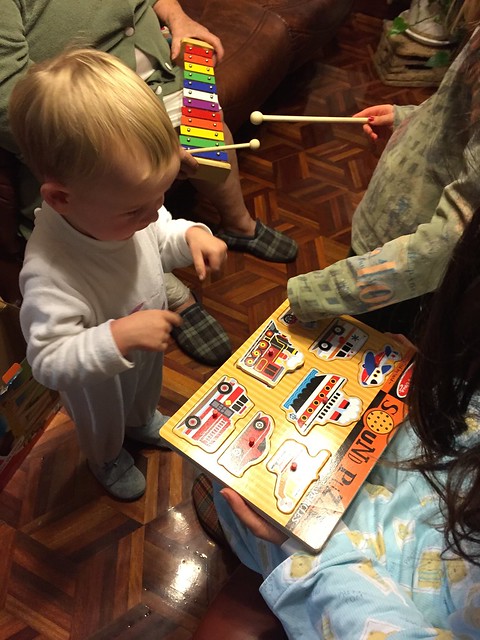 Ian got this sound board, that makes the noise of various vehicles hone you remove and replace them. 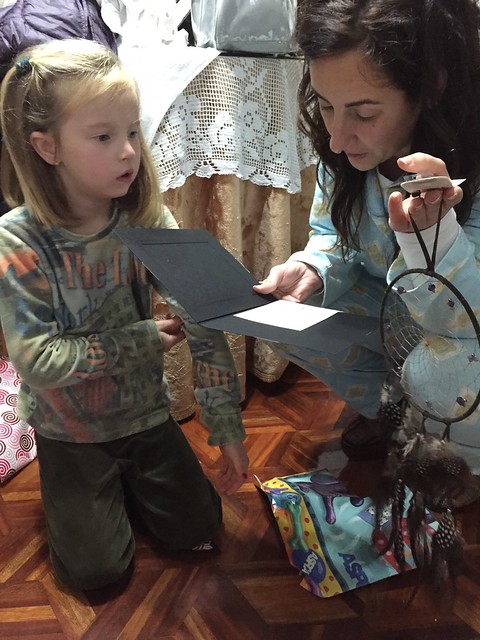 Nora surprised me a few months ago when she requested a dreamcatcher. She said that she had been having bad dreams and knew of this device from school. 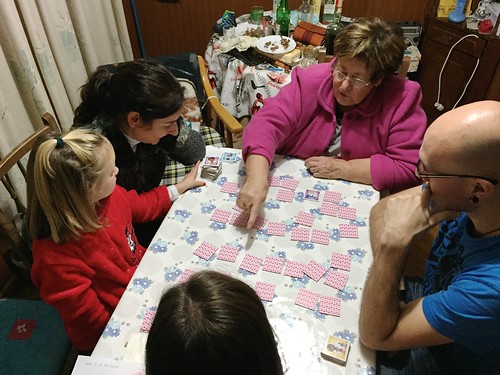 Nora got a Doc McStuffins memory game, which was played with much enthusiasm on Christmas afternoon. 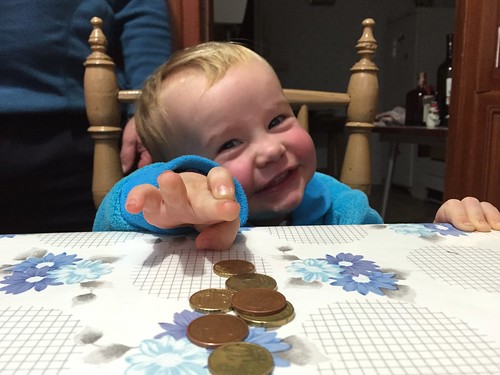 Ian prefers games with some money on the table.

All in all, it was a great Christmas and the finish to a good year. 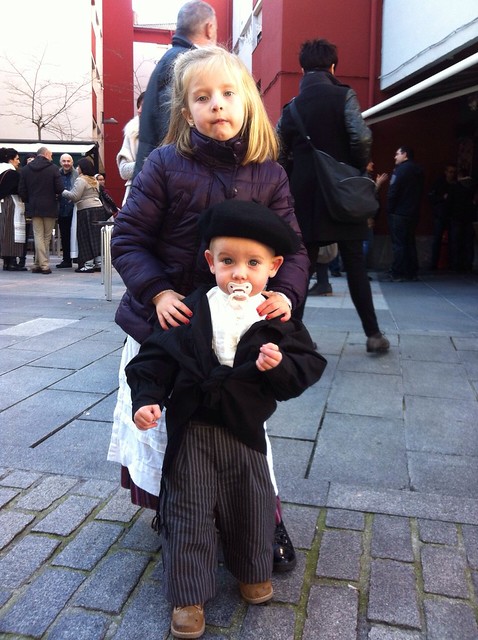