Swedish furniture giant, IKEA, has released a commercial in Spain that has quickly gone viral around El Internet. It's meant to be a tearjerker, and it is, if you suspend all your critical faculties and ignore the underlying message. It only came to my attention because my daughter's kindergarten teacher played it for all the parents of her students during a parent-teacher meeting yesterday. Some of the more intelligent parents questioned her motives, and rightly so. I'll run you through it...

The Other Letter (La Otra Carta)

The video starts by presenting the question, "Why do we insist on not giving our children what they want for Christmas?" Intrigued yet?

The ad then goes on to depict an "experiment" in which the children from ten families are brought into a room and asked to write a letter to the Magi Kings to ask what they want for Christmas.

Side note: In case you're new here, in Spain, the children receive presents at Christmas from the Magi Kings, or Three Wise Men, on Kings Day, January 6th. Not on Christmas from Santa Claus as British and American children do. Plus, it's common for the gifts at Christmas to only come from the Kings, i.e. if your aunt or uncle buys a gift for you, it shows up on Kings Day as being magically brought from the Orient. No "Thank You" cards! Now that I think about it, I wonder if this might explain the Spaniards' aversion to saying "Thank you"...hmmm... To me, a huge portion of the delight of childhood Christmas was seeing the presents under the tree and speculating as to their contents.

Back to our regularly scheduled rant... 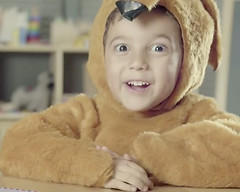 Of course the children, aged 5-10 or so, find it very easy to fire off some material possessions they are lusting after. Toys, musical instruments, games, etc. One girl points to every item on a catalog page. I've seen that behavior personally this month. The kids finish up their letters and place them in a box to send off to the Orient.

Then they are told that they have to write another letter to their parents, asking what they would like from their parents this Christmas. The children look a little befuddled, but they eventually write something.

Cut to the parents sitting on a couch, of recognizable brand, and someone presents the parents with the letters written to them from their children, to be read aloud. They are all along the lines of, "Mommy and Daddy, what I want for Christmas is for you to spend more time with me and play and draw together." Some of the parents break down into sobs, and others just smile.

Wait for it, the coup de grâce is coming...

The children are then told, "What if you could only send one of these letters? Which would you send?" The children are surprised by this twist, but they think about it for a while. Eventually every single one (okay, we are only shown two) says that they'd rather send – you guessed it! – the one to their parents.

Not to give them more views, but it might help you understand my objections...

So the message we receive is, "Your little children love you even more that all those toys they are asking for despite the fact that you don't spend any time with them and try to buy their love with toys."

As a parent who really tries hard to spend a lot of time with my children, but always feels like I'm falling short – because, let's face it, they always want more – this kind of message really stings. I would love to have a full time cook and maid and spend every moment from the proverbial 5pm to bedtime playing with my spawn, building block towers and painting flowers in the art studio annex of my mansion, but sometimes I have to banish my kids from the kitchen so the spitting oil from the frying pan doesn't sear their perfect little faces!

Not only that, but these kids are raised in a culture, as I mentioned above, where material goods are not asked of the parents at Christmas, so what could they possibly ask of Mommy and Daddy for Christmas? You could see the very silliness of question in their eyes.

And then they have the gall to ask if they would rather have toys or Mommy's love? WTF, IKEA? That's just plain mean.

On an even more subversive "What do they really want?" level, it's clear that IKEA is trying to pressure wage earners, with the love of their children (shame be upon the advertisers), into spending less at stores that sell toys and things fun for children, which IKEA does not sell, with the ultimate intent of the money staying in the bank account to be spent on home wares, which IKEA does sell. That's just low.