I go through ebbs and flows of iOS gaming. As my previous iPhone 4 slowly aged into oblivion, I weaned myself off of gaming, and I've since been reluctant to start back. I used to play quite a bit of the FIFA games, although they have messed with the controls, and I have sort of lost interest. Plus, the local team, Racing Santander, has dropped into the third division, which is not covered by EA Sports (It's in the game!). I'm very, very, very far from someone who identifies themselves as a "gamer", but I've long been a fan of auto racing games. The thrill of hitting a curve just right, or passing someone right at the finish line, it's a rush. I shy away from the advanced control modes where you actually have to do the shifting and braking manually. I much prefer to just try and steer. More on this, later.

In a recent episode of one of my favorite podcasts, [the] Accidental Tech Podcast, which I can only recommend if you would consider yourself an Apple Nerd (in which case, it's awesome!), the three hosts were discussing two fairly new games. While I was listening to the most recent episode, I told Siri to remind me to check out the two games they were talking about. My entire family is glad that I did.

The first two are perfect for whenever you need to kill a minute or two, in line at the grocery store, or, I'll admit it... I do most of my iOS gaming on the toilet. 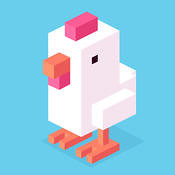 Remember Frogger? This game is Frogger, but awesomer. Plus, the app developers don’t seem to understand the freemium model, and as such, offers only in-app purchases that are relatively meaningless and don’t really improve the game. I still might throw some dollars at them for making such a great game. Nora ADORES it. It’s really simple. You can get these in-game coins, which you can either pay real $ for (don’t, unless you want to), watch a video ad to get (also not worth it), or just earn them by picking them up or by time played. And all they are good for is to randomly get a new character, which makes no difference, but definitely adds some texture to the game. It’s free, so don’t think much about it and just try it.

This one excels at simplicity and utter lack of flare. It’s 2D golf, over never-ending computer generated terrains. There are no rewards for holes-in-one nor penalties for scoring a 16 on a hole. No mulligans, no nothing. And it always picks up right where you left off. It’s $1.99, but it’s totally worth it. It really capture the frustration and exhilaration of real golf. It sounds dull, but just try to stop playing it! People are loving it.

As my esteemed podcasters pointed out, your relationship with this game will be an abusive one. Hint: You're the victim. The physics is wonky and you will get no praise, but that won't stop you from playing. Of all the addictive games I've experienced, this one is the hardest to put a finger on the mechanism that makes it so.

If only someone could write a song about it. Oh wait, Jonathan Mann has!

I think you'd be hard pressed to find a better racing game on iOS in 2014. In case you are like the developers of Crossy Road and don't understand the proper way to do a freemium app, these EA Sports guys are experts at extracting every last cent from the users of their free app. Personally, I refuse to use my dollars to jump ahead in the game, and I am very slowly working my way up through the ranks, driving my Ford Escort with all my might, working my way up to proper roadsters. The easiest level is perfect for me.

Real Racing 3 uses some really clever controls, using the accelerometer. The iPhone becomes your steering wheel. As you tilt it left, the image on the screen actually tilts right to remain level. You can manually brake, and probably shift on the advanced modes, but the brake and shift assist is such that you need not touch the screen at all during a race, which finally rids the problem of gaming on a touch device where your hand blocks your view.

If you have an Apple TV, Real Racing can use your television as the display and the iPhone as the controller. In much the same way that it was obvious in 1998 that it was inevitable that we would eventually be carrying around MP3s in our pockets, it's obvious that eventually we will be using our phones as gaming devices, beaming only the video up to big screens. RR3 is the first game where this is even remotely feasible. Even with a good wifi connection, there are slight glitches, perhaps while the phone is checking email, where you lose instantaneous feedback for a half a second. That doesn't seem like much, but when you're racing around a track at 200 kph, it can make a difference. If you have an Apple TV, I recommend you try this app just to get a glimpse of the future.