Tarkarí - The Best Restaurant in Colindres

Due to a lucky bit of childlessness this weekend, my wife and I were finally able to try the best restaurant in town, which opened less than a year ago, I think. It's a place called Tarkarí. The name comes from an Indian curry, the chef is Venezuelan, but the food is Italian, although perhaps the chef might prefer the word "fusion". The logo proclaims "gastroart", and the logo looks like it was drawn by my one year old son; how delightfully pretentious! The chef explained to me that the vegetable curry called tarkari was introduced to the Caribbean during British occupation, eventually made its way from the islands to Venezuela, and somewhere along the way baby goat was added to make the, now typical, Venezuelan dish called tarkarí de chivo. Perhaps it's this cultural culinary fusion that lead the chef to name his restaurant after it. Plus, it's a pretty cool word. 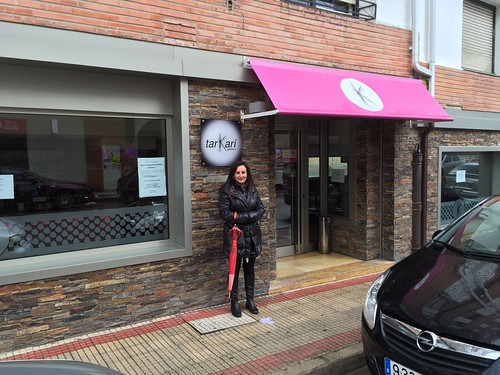 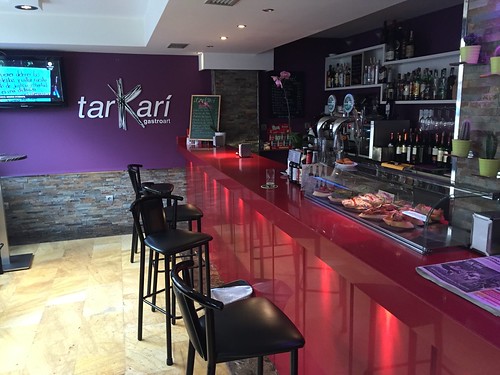 Inside the bar is clean and modern. Although, because I'm a barhopping local, I can tell you that the decor hasn't changed much since the previous owner. 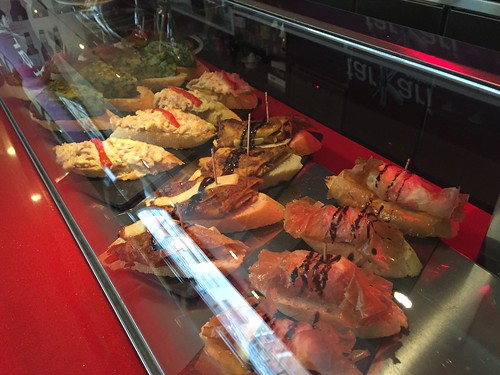 The tapas are mouthwatering, but that's not what we were there for. 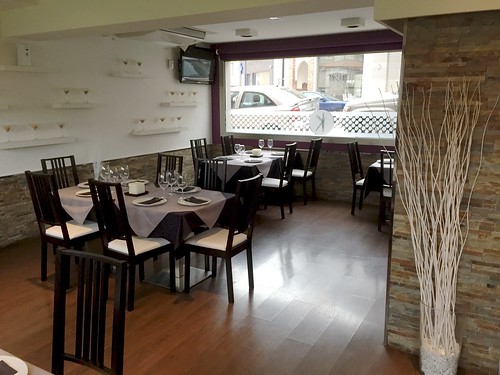 One look at the dining room is enough to tell you that, A) this is not a good place to bring small children, and B) it's a pricy place with good food. The cheaper Spanish restaurants cram as many tables into the space as they can; but at Tarkarí, and other fine restaurants, the tables are much more spread out. 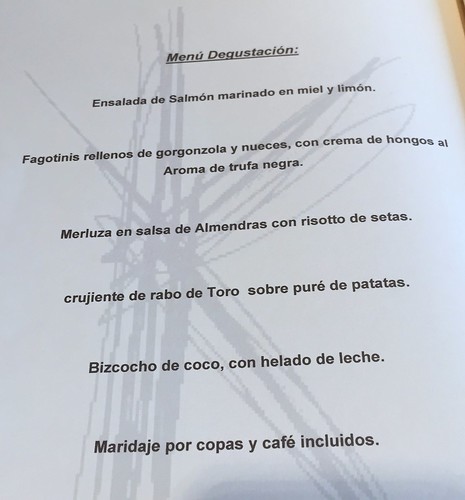 As always, we opted for the tasting menu. Let's go through each item, shall we? 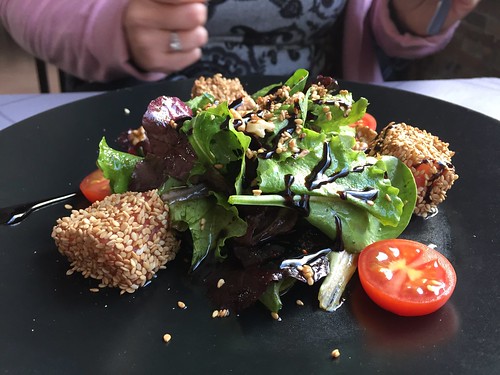 Salad with salmon marinated in honey and lemon.

The salad was good, with the sweet balsamic vinegar, but the salmon was amazing. The sesame seed crust was a very cool touch. Another easy to miss touch of brilliance I noticed was how he cut the bottoms off the cherry tomatoes to make them sit still and not roll around when you tried to stab one. 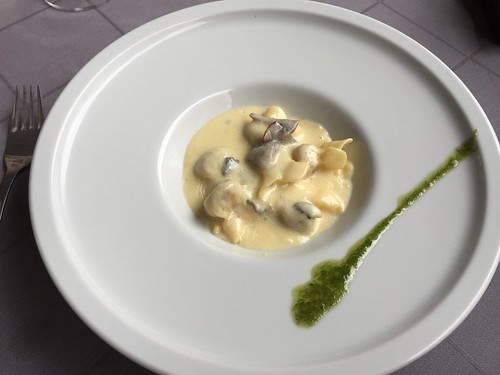 Fagottini stuffed with gorgonzola and walnuts, with a mushroom cream with the aroma of black truffles.

This was the "Oh my god, I need to close my eyes and savor this!" dish for me. It looks like a tiny serving in that big plate, but it was so rich! My wife didn't really care for it very much, claiming that it tasted "like butane", so she let me have her last two fagottini. 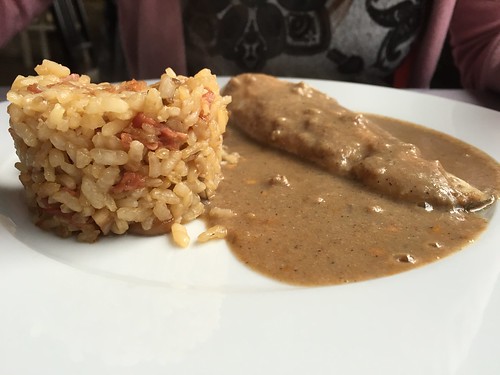 Normally, in my opinion, a top chef really makes his or her skills known with fish, as I think fish is harder for amateurs to cook perfectly than other foods, but in this case, the hake was nothing special. I'm not a huge fan of almond sauces, either. And the rice was much drier than my expectation of what a risotto is. It was okay, but it was easily the worst dish. 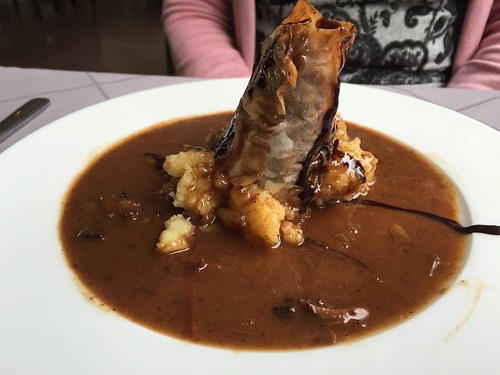 Crunchy [pastry] of bull tail on a potato purée.

Bull tail may seem exotic to some of my anglophone readers, but it's a fairly common piece of meat in Spain. The pastry thing didn't add much beyond the ability to present it as a meat phallus. This dish was simply a really good roast beef and mashed potatoes. Having missed Thanksgiving in America this year, I was especially in the mood for some good mashed potatoes and gravy. We could barely finish it, we were so full. 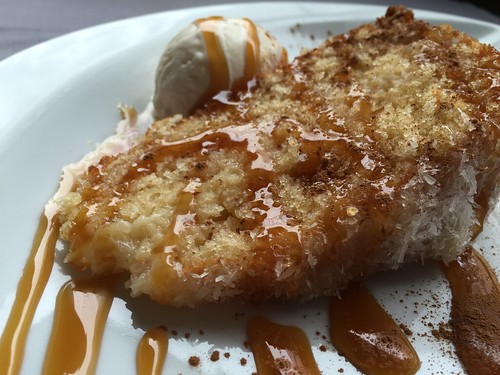 I'm not a big cake lover, but this one was really well made. Soft and spongey, just like cake should be. The caramel wasn't too sweet, which was perfect. 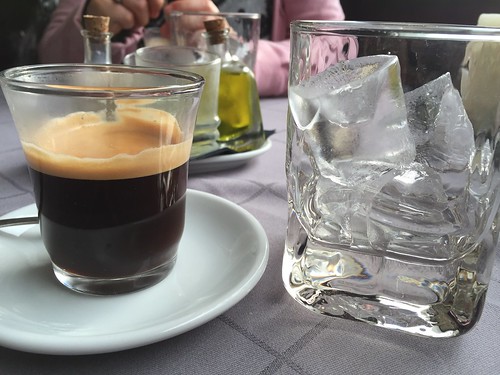 Then came the coffee. My wife has turned me on to iced coffee, in which you put a little sugar into the espresso (this is the only time I put sugar in coffee), stir it up while it's hot, and then pour it into a glass of ice. It's quite lovely. 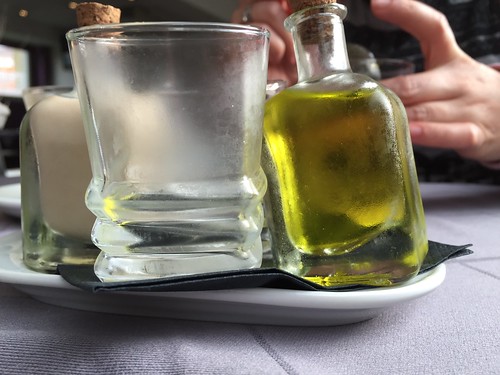 The waitress then offered some liqueurs, on the house. I chose the orujo de hierbas, a yellow herb liqueur, and my wife had the crema de orujo, which is not dissimilar to Bailey's. Each came in their own little bottle and shot glass, both of which had been in the freezer.

We were told that that each dish was paired with a wine, but in reality they just served us a white with the fish, and then switched to red for the beef. Both were excellent, and although the bottle was never left on the table, the waitress was very attentive with refills, so our glasses were never empty.

Our other options for going out to eat on Sunday in Colindres would've been a "Menu of the Day" for around 10€ each, with barely potable wine and no liqueurs, or maybe 15€ with a wine upgrade that didn't quite reach the quality of the wine we had at Tarkarí. The food at another place would've been considerably more poorly prepared and presented. So I was very pleasantly surprised to discover that the 25€ each for the tasting menu also included all the wine and coffee and bread (other places of this calibre charge you for the bread). Tarkarí might be the best quality-to-price ratio of dining I've experienced in Spain. Highly recommended. I look forward to going back to try the titular tarkarí de chivo.

And best of all, this place is within walking distance of my house. Love it! 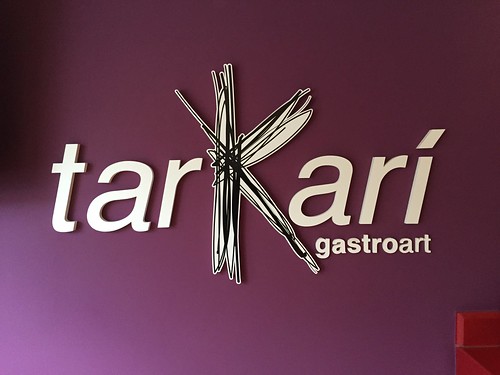