Ever since my daughter's preschool class took a field trip there two years ago, Karpin Abentura has been on our list of places to take the kids for a day. A couple Sundays ago we finally pulled the trigger and went there. It was a lot closer than we thought, only a thirty minute drive away, straight up into the mountains. It's just across the border in the Vizcaya, in the Basque Country. The other local zoo, Cabárceno, is slightly further away, about twice as expensive, and more spread out, requiring getting the kids into and out of the car between exhibits. To be fair, however, Cabárceno has many more animals and generally a more professional feel to the place. Karpin feels like the RyanAir of zoos.

The history of the place is obvious, with the grand entrance and the dilapidated mansion in the middle; it used to be the land of a rich Basque. It belonged to Urbano Peña Chávarri, an engineer at Altos Hornos de Vizcaya, a huge ironworks business in Bilbao. Mining and metallurgy was an enormous boon to the Basque Country in the twentieth century. But I suspect that most of Urbano's money really came from his uncle, Romualdo Chávarri, a classic indiano (remember when we learned about that word?), who made a fortune in the Puerto Rican textile industry. The construction of the mansion was completed in 1911, some time passed, generations died, and eighty four years later, in 1995, it was inaugurated as a wildlife refuge.

The car ride up there started off happy, but it didn't end well. Nora is a lot better in the car than she was when she was younger, and Ian is way better than Nora was at his age, but Ian gets car sick sometimes, a gene passed down from his father's father's mother. Because the journey is so mountainous, there were plenty of curves. We had to stop once, by an abandoned factory, where the kids had fun throwing rocks for about ten minutes. We ended up making it to about 600 meters from the zoo before he puked all over himself. Luckily, my wife is a genius, and had packed backup clothes. I ended up walking him in the stroller the rest of the way up to the zoo. 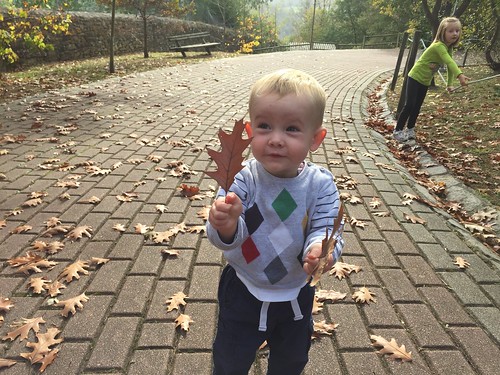 Once inside the zoo, the only thing the stroller was good for was for me to walk back to the car to get our picnic lunch. Ian walked for the entire seven hours we were there. It was a great place for that, too, because there wasn't too much danger he could get into. It's nice to feel comfortable letting your kid be fifty meters away from you. And sometimes we had to wait for him to catch up. On one such occasion, I decided to try the time-lapse feature on my phone.

When we walked by the cat enclosures at 11am, they appeared empty. I think maybe we saw one dozing lynx. The Mississippi alligator was also motionless, soaking up what little sun made it through the overcast Basque sky. The first interesting exhibit was the monkeys. Specifically they were Barbary macaques, like the monkeys that often get the better of tourists in Gibraltar. 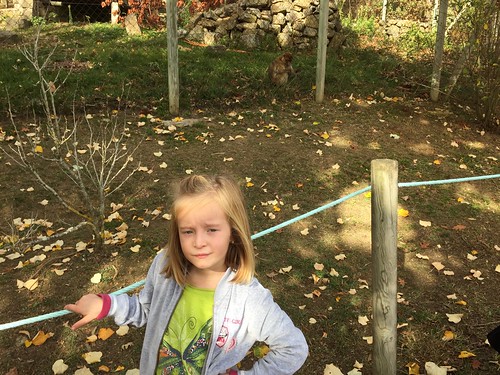 They kept us fairly far from the fence. Nora wasn't that impressed. 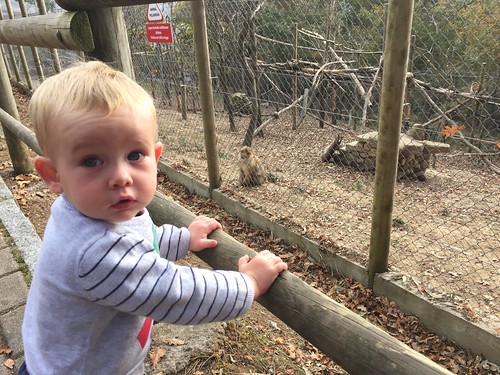 Ian, on the other hand, literally had to be dragged kicking and screaming away from the monkey exhibit after we decided that fifteen minutes of watching them was enough.

There was a young man sitting between the human and monkey barriers with a huge panel with papers on his lap. At first I thought he must be sketching something, but when I got closer, I saw that he was ticking boxes on each page of something. Curious, I asked him, in Spanish, what he was recording, and he explained to me, in pretty good English, that he was a primatology student, and he was studying the social interactions of the macaques. He said that they had recently combined two social groups into one cage, and things had not gone so well. Two of the females were in their own cells to reflect on their behavior. 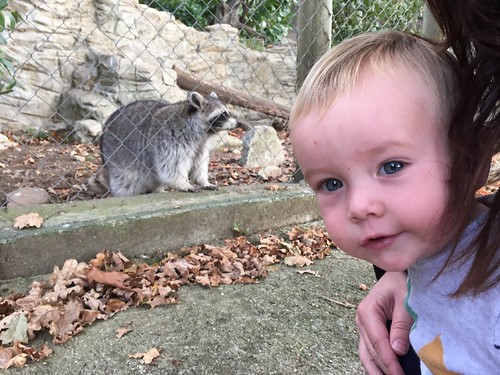 The raccoons weren't that interesting.

This ostrich really wanted to kiss me.

It's cool how you can see the film cover his eye as he goes for the peck. 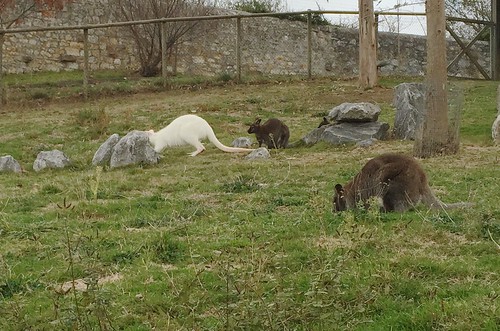 Let's face it. Wallabies are really just enormous rats, aren't they? (Yes, I know that they are marsupials.) One of them was albino, which was pretty cool.

Just before we left, just before sundown, we went back to the feline exhibits, and they were all up and walking about. We saw a couple lynxes, some wild cats, but no lions or tigers. My favorite, though, was the black panther. 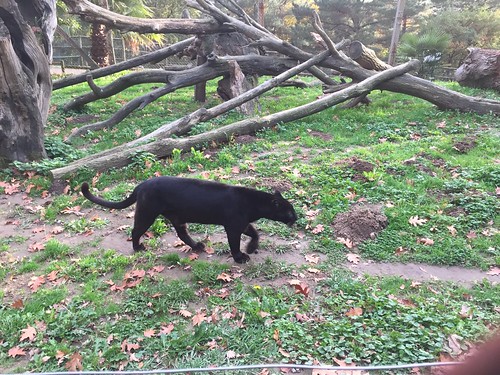 I think he's walked that path before. 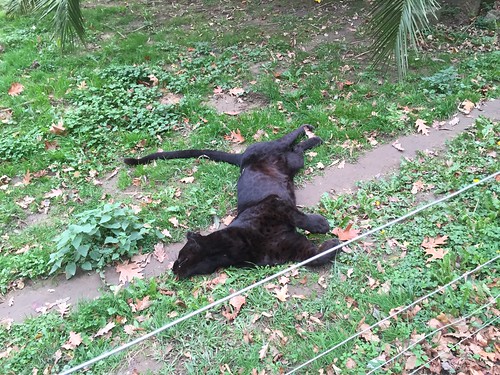 Here you can really see his spots. I felt a really strong urge to scratch him behind the ear and hug him. In fact, there were quite a few animals that we saw that I wanted to hug and play with, but that would probable eviscerate me in less than a second.

I can't recall everything that we saw, but there were lots of birds of prey, some turtles, some vultures, some mountain goats, some emu, ostriches, smaller primates, like lemurs (one tried to snatch my phone as I tried to photograph it), some llamas, and plenty of deer. They had two bears, also huggable, which we saw right at their afternoon fruit and vegetable snack time.

The continent of Africa was very underrepresented; there wasn't much in the way of savanna fauna.

There is a very nice family-friendly picnic area, with about a dozen picnic tables surrounding a playground in such a way that the kids can't really wander off, so you don't have to be watching them at every moment. We took a tortilla de patata, some breaded chicken breast fillets and a cooler with some cold beer and juice and had a wonderful lunch. 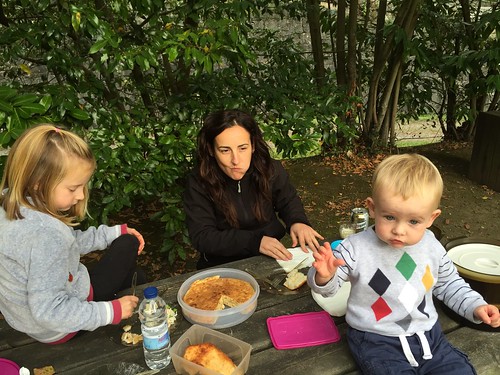 Feeding time at the zoo. 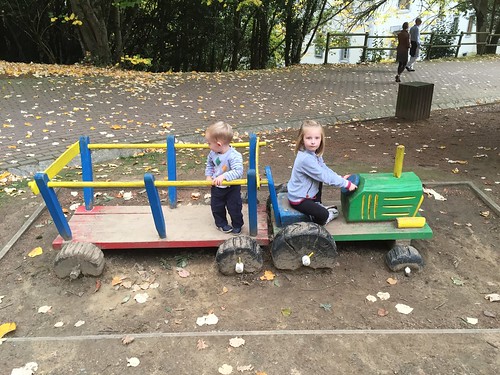 In another section, they had some pretty long slides that we all went down. At first Nora was too scared to go down by herself, but once she realized that she could, she went down about fifty times. Ian was fearless and loved every second of it, especially going down the slide at the same time as his big sister, both full of giggles. We spent the last hour of our time there, by which time we were the only visitors in the park, going down the slides. I hadn't gone down a slide in a long time, and I had a lot of fun.

Despite being somewhat of a science nerd, I've never had much of a fascination with dinosaurs. For whatever reason, perhaps their high education to maintenance quotient, or some lobbying from the animatronics industry, someone decided that dinosaurs should be part of Karpin Abentura, so part of the park is dedicated to prehistoric animals.

I have to admit that the "Attention! DO NOT FEED THE DINOSAURS!" sign got a chuckle out of my wife and me.

They liked animatronics so much that they even ventured down into the uncanny valley and made some "humans" to explain things in Basque, Spanish, and some pretty strongly accented English.

At one point along the path, my leg passed through a very well hidden infrared laser beam, and large klaxon went off. Then a roar! Up ahead, through the trees, I saw red "Danger!" lights flashing around an tiny enclosure containing... a Tyrannosaurus Rex!

Because I wasn't expecting it, I will admit that it did trigger my innate "fight or flight" physiological response for the split second until my brain processed the silliness of the rubber T-Rex head. 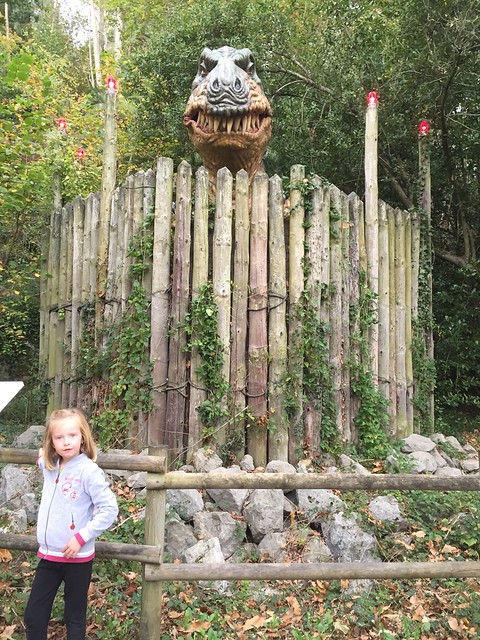 Ian's reaction, on the other hand... well, see for yourself.

Attention: Even if you haven't clicked play on any of the videos so far in this post, you really need to watch at least the first 40 seconds of this one.

He watched it for about ten iterations before we finally got him to leave.

At the exit from the dinosaur exhibit, they had an obligatory photo spot, with this enormous dinosaur foot. It seemed a little too big to be real, but I don't know much about dinosaurs, just enough to know that most of the feather-less depictions of the twenty-year-old models we saw are now known to be inaccurate. 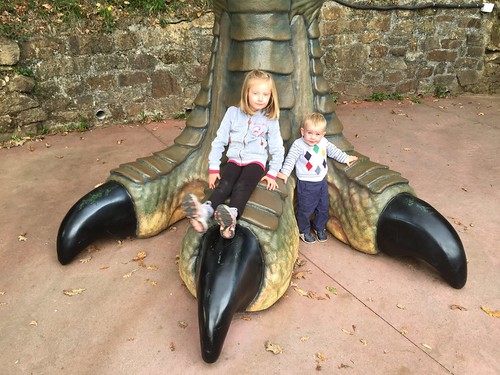 We had a wonderful time at Karpin Abentura and look forward to going back many more times. It's just the right size that you can see everything without ever being in a hurry. It's a great way to spend a day outdoors with kids. Oh, and the mountain views were lovely. 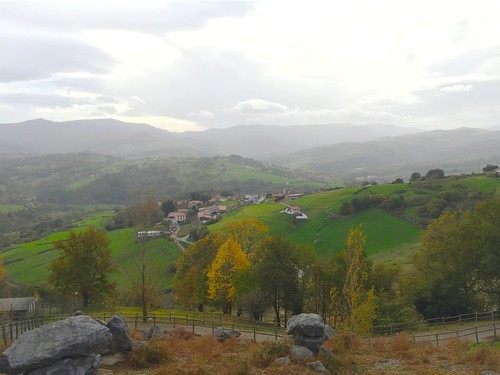