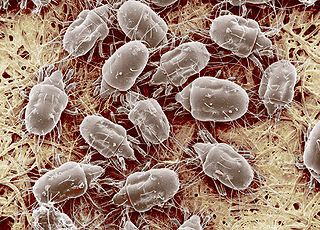 Yesterday, with the entire family – the children were forbidden for solstice myth reasons – digging around in our storage room to find the missing Christmas tree legs, we ended up finding another leg that we'd bought this past summer, a leg of Iberian Ham, or jamón ibérico. We sliced off a few slices for dinner last night.

This morning, I glanced at the ham and noticed some little white dots on the open meat. Upon closer inspection, I realized that they were moving. Ugh. Here's what our ham looks like this morning: (look closely)

The world "revolting" comes to mind.

I've seen these before, both on ham and extremely cured cheese. They are either Tyrophagus putrescentiae or Tyrophagus longior, commonly called mold mites. As you may remember from your Greek lessons, tyros means "cheese", and "phagein" means "to eat" or "to devour". To quote Wikipedia:

[Tyrophagus putrescentiae] is a common pest of stored products, especially those with a high protein and fat content (meat, cheese, nuts and seeds, dried eggs, etc.). It feeds on the fungi that grow on the foodstuffs, and can become a pest of mycology laboratories. 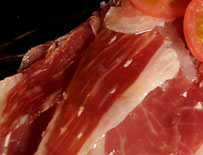 One must be careful not to confuse these little buggers with tyrosine crystals, which are little white splotches that occur sometime on cured ham. Tyrosine a perfectly normal amino acid used by mammalian cells to synthesize proteins. It's in a lot of stuff you eat and is not harmful whatsoever. They are even considered by some experts to be signs of high quality ham.

You mite want to clean your ham

I'm going to translate some information from this great page about this pest.

We're talking about a mite, like those known as "dust mites" that produce so many allergies. Specifically the species Tyrophagus putrescentiae. They are parasites that, like you and me, love ham, and if it's Iberian Ham, they like it even more (not joking).

We can also find them in other cured foods rich in protein, like cheese and deli meats. It's just that in those cases we notice them less; it's a lot harder to miss them in the case of ham, with the white color against the bright red.

The fine sand (that's what it looks like) is formed by living and dead mites and their excretions, can be an allergen.

The truth is that these little white bugs choose well. They like to live in high temperatures and eat the best foods. They're not stupid.

The fact of the matter is that they are perfectly safe to eat (protein bonus!), but if you let the infestation get too big, they can dry out your ham, so the recommended action is to wipe them off with a cloth or sponge that is soaked with either hot sunflower or olive oil or the melted fat from the ham itself. If you've got a lot of them, you can use water and then dry it off.

Too bad I couldn't get a closer video of them, you say? YouTube to the rescue! [viewer discretion is advised if you ever want to eat ham again]

Just like with all the other microscopic mites and creepy crawlies that science has shown us live in, on and around us, you've really got to just unfocus your eyes and not think about these critters. Another webpage I found suggested that the mites should really be considered "part of the ham", and returning a ham to the seller for having mites would be as ridiculous as returning an extremely strong cheese, like queso de cabrales for having rotted.

Who wants a slice? 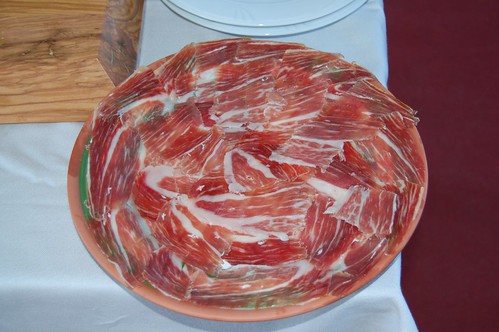