State of the Offspring Address - November 2014

This month the children have made huge strides towards being mature children rather than babies. Nora has always been very sensitive about sleeping alone. She likes to have someone in the room with her both when she goes to sleep, but also if she wakes up during the night. While Marga was pregnant with Ian, I spent most nights in Nora's room, so if/when Nora woke up during the night, the pregnant lady was not disturbed. After Ian was born, we switched, and I was with the needier newborn. Ian has been doing a lot better about sleeping through the entire night without needing a bottle, and Nora has been getting braver and better, in general, about sleeping. So early this month, Nora requested that she and Ian sleep alone together in the same room. I was skeptical that such a plan would work, but it did!! [launch the streamers and balloons and confetti] It's SO much nicer to be a hallway away from a sleeping toddler than in the same room, because he's got to really want something to wake you up, rather than just his 5 second "Where's my pacifier? Oh, there attached to my chest!" crises. It's working out splendidly.

Previously, on State of the Offspring...

It’s difficult to draw the line between “It’s okay, sweetie, you don’t have to do anything you don’t want to do” and shoving our little bird off the branch for some terrifying free fall that may lead to a necessary survival skill. Everyone can probably remember something that they were forced to do against their will as children that they were later glad they had been forced to do. I think we’ve decided to make future dance classes mandatory, no backing out. We’ll see how that goes.

This approach has been a resounding success. Taking away the option of backing out was all that was needed. She hasn't had a problem going since. The class is working on two choreographed routines which they will present just before Christmas. I haven't seen any of it, as I don't take her or pick her up from dance class, and Nora refuses to show me, but a couple times I've caught her stepping and arm thrusting in rhythm, practicing.

One day, when Nora came home from dance class, she asked me to download the songs they are "studying". With just a few lyrics remembered by my wife, it was pretty easy for me to find the songs on YouTube. Pressing play on the video was the first time my "Like hell you're leaving the house dressed like that, young lady!" neuron twitched. Here's one of them:

I do take solace in several things: first of all the terribly stupid Spanglish lyrics are relatively clean, and second of all I've seen her outfit for her dance performance, and it's not remotely sexualized. Today's twerking is like yesteryear's hip-gyrating Twist.

Actually, Nora got caught in dance class singing along to some of the English lyrics, and was asked if she spoke English.

Ian has grown very fond of the television. Whenever we come home from daycare or wherever, he walks into the living room, grabs the remote, and hands it to a grown-up and says "Telly!" We do our best to minimize how much television the kids view, but it's just an unavoidably easy distraction sometimes, when it's important to, you know, not have a toddler directly under a frying pan full of hot oil. A lot of the programming on the Disney Jr. channel is actually pretty decent, and Nora is all the time demonstrating that she's learning many new words and concepts from it. 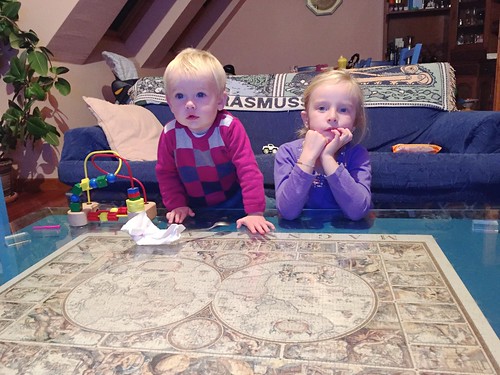 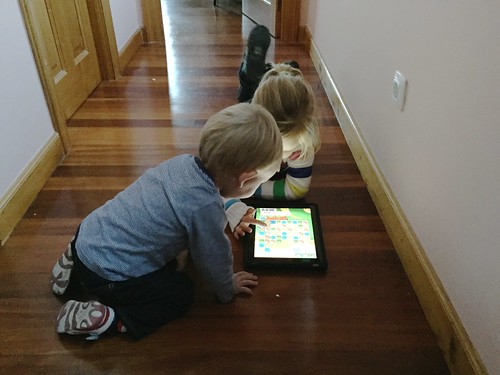 Much to Nora's chagrin, Ian has also learned to like the iPad, although he plays Candy Crush the way he plays the piano, more like a carpenter than a surgeon.

Ian is a total champ at going to daycare. Sometimes I think that if he had the lingual skills, he'd specifically ask to be taken there. He trots right in and immediately begins participating in whatever the other kids are doing. The daycare workers are pretty phenomenal about controlling the little tykes, too. 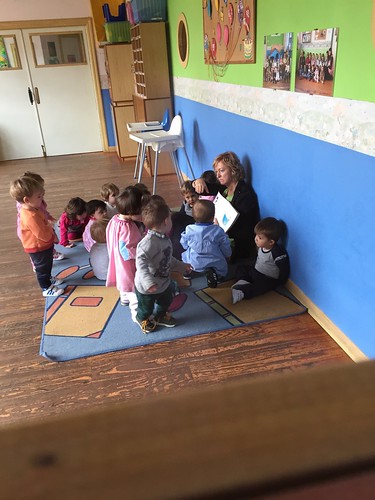 You could offer me a million euro prize to get fourteen 1-2 year olds onto that 6 m2 carpet without the use of force, and I'd never be able to. That's Ian in the white t-shirt sitting towards the back. I took this photo about 20 seconds after opening the door for him. I couldn't be prouder of his social skills. 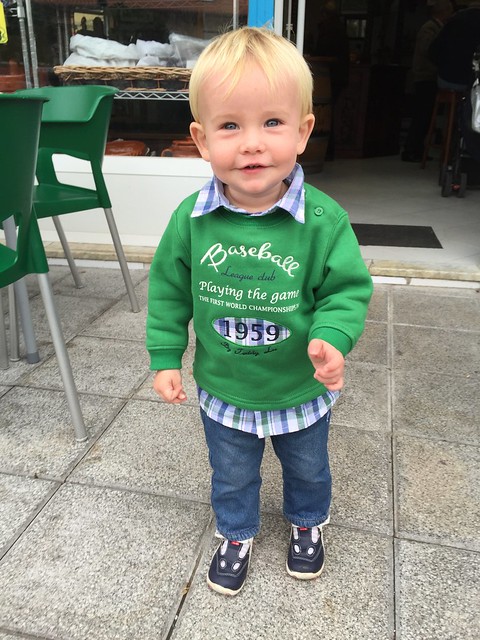 Whenever we walk into an establishment, like a store or a bar, Ian loudly announces "¡Hola!" to everyone inside. The little dude's dripping with charisma. 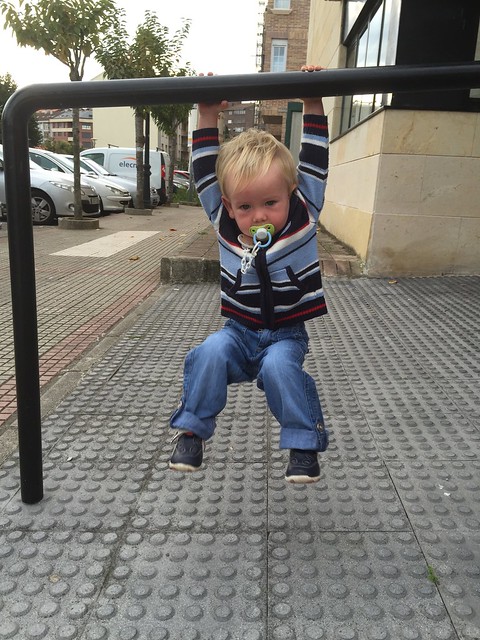 He's also strong in his little primate desire to explore the world and swing from everything. 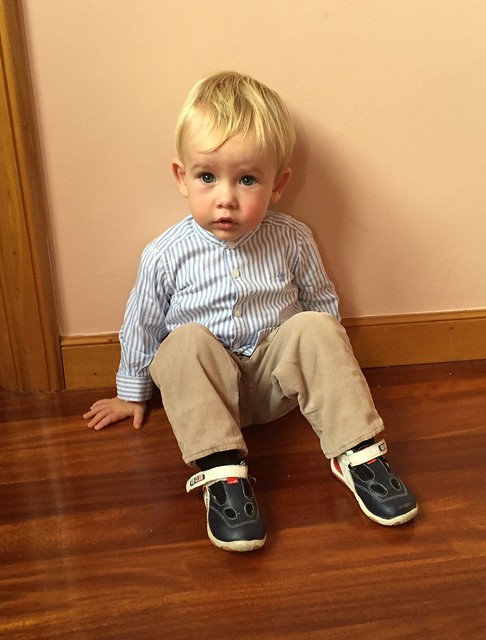 Here he is a little dressed up for Photo Day at daycare. 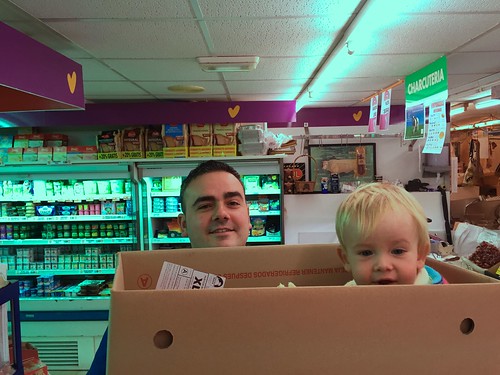 One day this month, during our daily visit to the local grocery store after dropping Nora off at school, Ian's friend, Andrés, was emptying boxes of eggs onto the store shelves. Ian took an interest in the box, so Andrés put him inside the box and carried him around. Ian loved it!

Both kids are getting pretty good at rolling their own joints, but we still don't let Ian light his own. That would be irresponsible parenting! 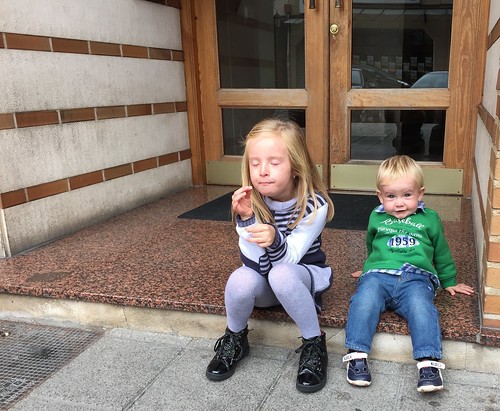 I'm joking, of course, but how totally baked do they both look in this photograph? You couldn't get them to do this again in a million tries.

Here's a little video of the brood being adorable in the car.

One day this month, when I picked Nora up from school, she had a big frown on her face. When I inquired, she told me that she was getting really bored in English class because she already knew all the words they were trying to teach her. I asked her if the teacher knew this, and she expressed some doubt, saying that she rarely speaks up in class. It will be interesting to see how this pre-knowledge of a required subject plays out in her scholastic career.

The Prince and the Peas

And now, for your viewing pleasure... Ian eating peas.

Nora is totally caught up in the phenomenon of Christmas this year. She's been listing things that she's going to ask the Magi Kings for for weeks. Some of them we've already bought, and some of those were even before she expressed interest. Soon she and her mother are going to sit down and iron out a final draft of the list to lock things down. Although I think she's getting most of her Magi King stuff from school, Nora is only slightly confused about how the other two mythical gift givers, Santa Claus and the Olentzero, from her father's and mother's respective cultures factor into the season. Ian, of course, has no clue about the past or future yet. 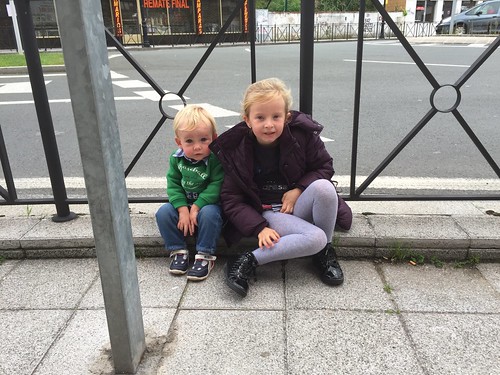