Having done it for the previous two years, 2012 and 2013, it was assumed that I would be carving a pumpkin at my daughter's school again this year. Now veterans at this, my daughter's teacher and I decided it would be much better to do the "performance" in the cafeteria/auditorium, because in past years it's been tough squeezing all the kids in. My daughter's 5-year-old "kindergarten" class stayed for the entire process, but during the cleaning and later the lit presentation, the 3-year-old and 4-year-old classes came in to participate. Halloween in Spain, or at least in my neck of the Iberian woods, has changed immensely since two years ago when almost no one knew about Halloween apart from what American culture had been rammed down children's throats via cartoons. This year, almost every store in town decorated its shop window with a skeleton, pumpkin or faux-spider web. There as a children's costume parade, and in the nearby town of Laredo, there was a big zombie crawl – or whatever those are called – for young people over 18. 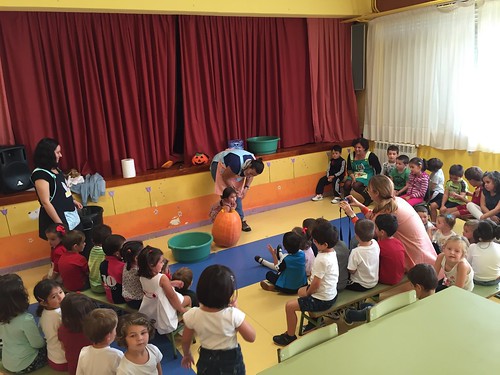 Each child got a turn pulling out some of the gourd guts. They varied widely on the spectrum of barely wanting to touch it – some declined the opportunity entirely – and really grabbing a big handful. That's Nora in the back loudly projecting her "OMG, this is so boring!" body language.

The five-year-old class did the pumpkin cleaning first. They are learning their alphabet, so they went in alphabetical order (little Álvaro must be loving that). After the three Marios went, the teacher skipped right to Paula. Nora stood up but was too timid to say anything. I said to the teacher, "What happened to N?", and immediately regretted it, because she had intentionally skipped Nora both to see if Nora would notice, and because Nora was going to be given a special place during the rest of the "ceremony" up with me in front of everyone. But after I opened my mouth, she had to let Nora take her turn as well as be the special helper later.

I wanted to set up my GoPro to capture a timelapse of the entire event, but apparently I hadn't turned it off the day before after I charged it, and it had no battery left. Grr!

My daughter's teacher recorded a video of some of the carving.

I suppose that I probably won't do this again next year, as I won't have any children in preschool, but I may start again the year after that when I do again. 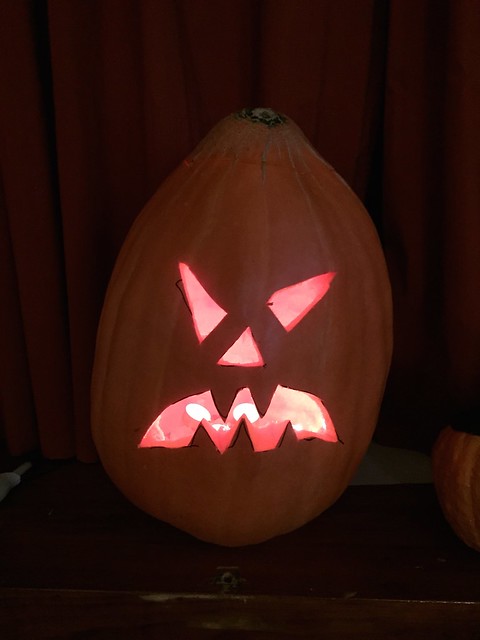