After an exhausting Saturday caring for the kids and doing housework, we decided we really needed to get out of the house on the unusually warm, sunny late October Sunday. Searching through some Cantabrian tourism websites, my wife found Cueva del Valle, in nearby Rasines (which I've decided to pronounce "raisins" because it's funny). The place is called a Paleolithic Park, because evidence of human cave occupants has been dated to over 9,000 years ago. To help you grok that number, that's temporally as far away from Ancient Egypt as Ancient Egypt is from us. Grok, incidentally, was one of the cave's more notorious occupants back then. As we began following the signs from Rasines, we found ourselves going down single-lane gravel roads, passing dozens of cows and sheep, and wondering if this place was really a park or not. Soon, however, we arrived to a little grassy parking lot with ten vehicles, with most of their passengers occupying the picnic tables finishing up their leisurely lunch. Because we didn't have any idea what to expect, we'd brought Nora's scooter, and had to inform her that she couldn't ride it on gravel.

The "you are here" map on the sign post wasn't very well designed, so we randomly picked one of the two ways we could walk. We found some really ancient rundown buildings that the forest had overtaken. At one spot on the path, with a grassy field on one side of the path and a forested mountain on the other, it got really cold. We were outside the mouth of a little cave entrance. The information sign at its entry told us that there is evidence that Romans, during their golden imperial age, mined silver and other precious metals here. Inside the cave, the temperature dropped 15 degrees. It was very cool. 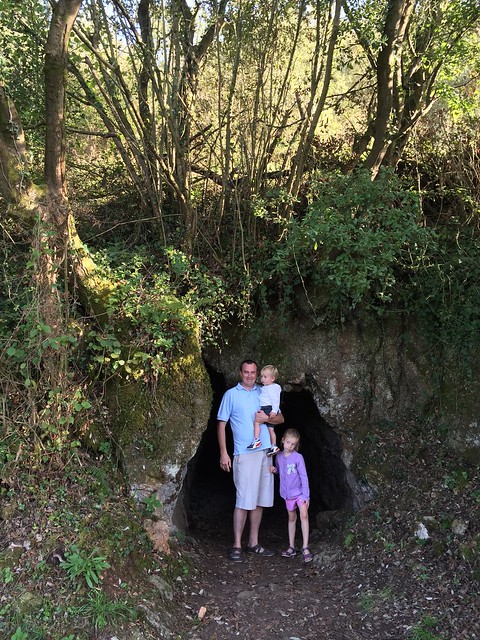 This particular cave continued on at about the same width and height, which makes it seem most likely to be a mine, far into the mountain.

We, however, continued along the path, back out in the warm ambient temperature. 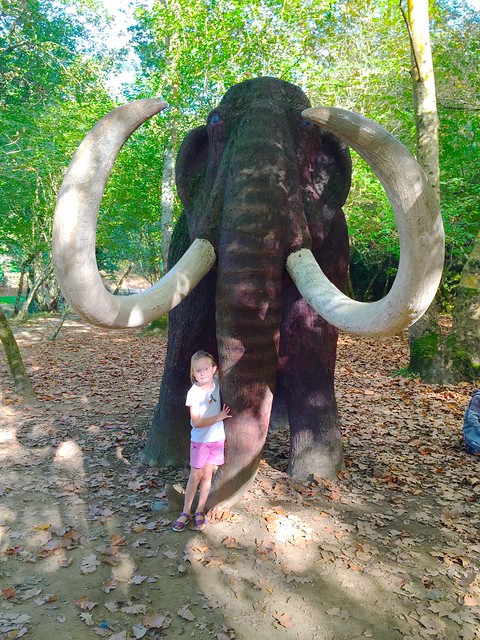 We came across this huge wooly mammoth, and a plaque educating us about it. The most striking thing to me about it was how little the ears were compared to modern day pachyderms. When Nora asked why they all died out, I gave the simple "We killed them all." answer. 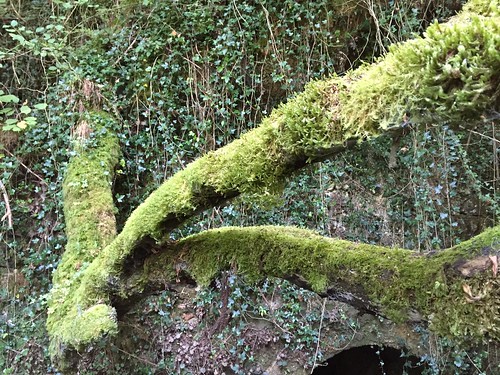 I saw some of the longest moss I've ever seen. This was "inside" a dank structure that looked pretty Roman to me. 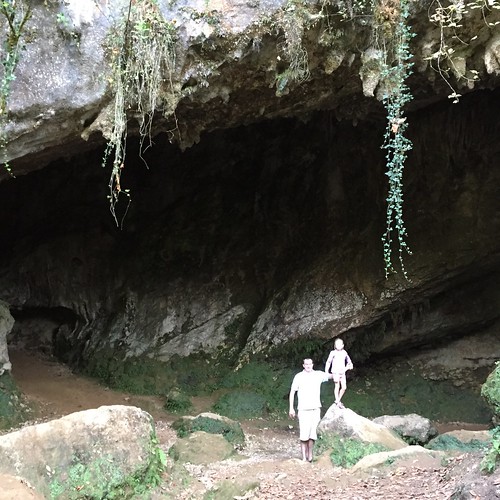 We're not positive, but I think this is The Cave. Another group of tourists walked deeper into the cave until I could no longer see the light from their smartphones they were navigating with. 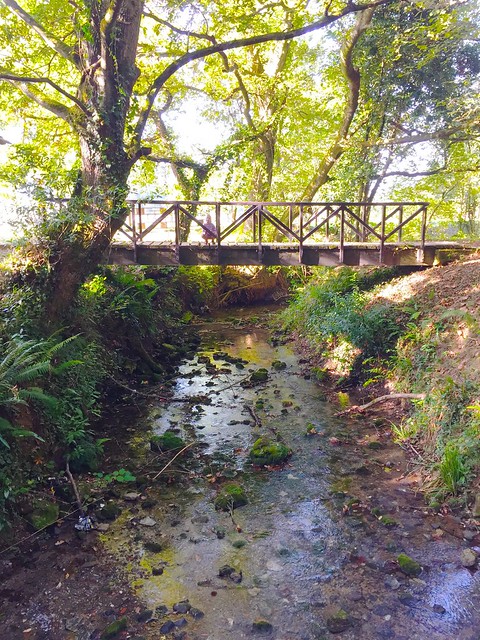 That's Nora over there on that bridge.

I heard this theory one time that I really like and will espouse for you now from my proverbial armchair. Apparently some researchers analyzed art from all over the world, and one very common theme they discovered is that humans, across all cultures, tend to draw, and enjoy, landscapes that have very common elements: mountains, trees, a grassy plain, and some running body of water. The theory goes that these scenes are very pleasing to us because they were exactly the kind of habitat that our ancestors were looking for, both in the African savannas and in the land they migrated to upon leaving the home continent. I'm a sucker for vaguely plausible unprovable theories that link us all together as a species through our evolutionary history. The place where we spent our Sunday afternoon had all those criteria in spades; my caveman neurons were all titillated.

Ian's most favorite pastime in the world is picking up, examining, and throwing rocks. He felt right at home outside the little mine where we stopped for over an hour on the way back to the car to let the kids collect and throw rocks into this poor farmer's field. Nora, as always, took the white collar managerial role, and Ian that of the blue collar grunt, doing the lion's share of the rock throwing labor. They were so cute together.