My Rite to Bear Arms in America

Despite growing up in the American South, I've never liked guns. Loud noises annoy me, I grew up in a Liberal household where guns were shunned, though rarely spoken about, and, as an intellectual matter, they – pistols, at least – are clearly designed to kill humans, which is something I feel pretty strongly against. Add to that the fact that America has a "gun problem", where every day of the year you can read about people killing each other, often by accident, with unattended guns. Plus, I've generally been averse to hobbies, like scuba diving, skydiving, motorcycling, bungie jumping, etc., where the first objective of the activity is "try not to die". Firearms have just never had any appeal to me. One of the upsides of having a spouse from another culture is that you can see your own culture through their eyes. My wife, for instance, was disappointed when, on our recent visit, the local Homecoming parade was rescheduled due to rain. She loves experiencing, at least once, anything that can be described as "americana" (the English word, not Spanish). If you know where we can find a drive-in movie, let us know.

Before our recent trip to the States, my wife mentioned to my mother that she's always wanted go to a shooting range. Such an activity had never occurred to me as something to do for fun. Over the past three decades of fixing computers for almost everyone in town, my mother has built up quite the social favor network, so it took her no time at all to contact a local gun instructor and hobbyist, named Clyde, who has a gun range, i.e. a meadow behind his house, where he gives gun lessons. As the time to go grew near, I admit that my curiosity and excitement piqued.

On the appointed afternoon, we drove nine miles outside of town to Clyde's house. Judging from the fact that Clyde's surname is the same as the name of the gravel road his house is on, I'm guessing that Clyde has lived on that land all his life – and perhaps his father and grandfather, too. My wife, Marga, might be the first European citizen to set foot on that property in that time, as well. When we drove up, Clyde was meandering around his front yard with a very happy dog. He unlocked a padlocked steel cable that was blocking a road into the woods and told us to drive on down to the meadow, and he'd be down in a second in his truck after getting the guns from the house. As we drove down the dark canopied lane, I asked my mother if she'd ever seen True Detective.

At the bottom of the hill, the road spilled out into a sunny meadow, about the size of a children's soccer field. It had just rained and there were gnats everywhere. At one end of the field were some targets set up in front of a big mound of dirt. Our totally naive minds began imagining us being at one end of the field, firing a handgun (pew! pew!) 70 or 80 yards towards the targets at the other end.

If that last sentence didn't make it clear enough, I'm about as far from a gun expert as can be, so I will probably make some mistakes in this post. I welcome constructive corrections.

When Clyde arrived, he brought out his duffel bag of arms and set them on a wooden table. I told him that we were total newbies and he should assume we know nothing. Clyde was very good about making safety the (obvious) top priority, laying out the ground rules, such as always keeping the gun pointed downrange, even when it's not loaded, and not loading the gun, either by introducing the magazine or closing the cylinder of the revolver, until you are in shooting position and absolutely ready to fire. The "Never point it at something you aren't willing to shoot" rule was a good one.

He introduced the guns more or less in order from weakest to strongest, in terms of recoil force, and when he asked us which we wanted to shoot first, we decided to stick to that order.

The first one was a beautiful Colt .22 caliber Huntsman. Marga recognized the Colt brand from the hundreds of hours of westerns she watched with her father as a kid. 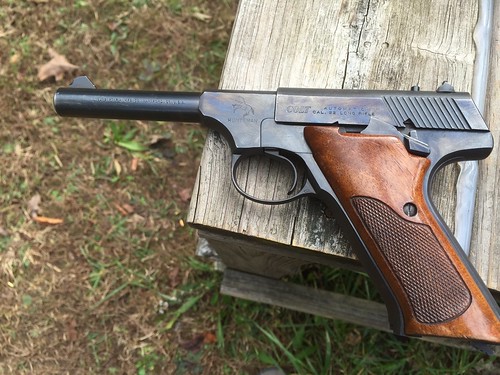 This gun felt great in my hand, with the angle of the grip and the nice curve that fit between my thumb and forefinger. 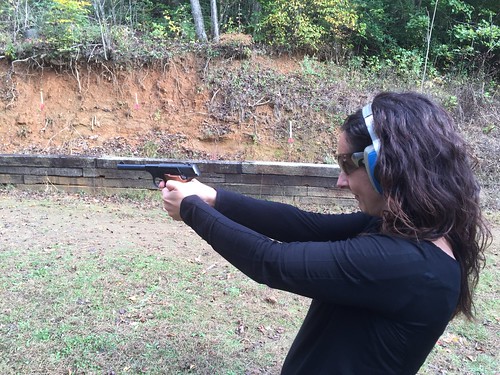 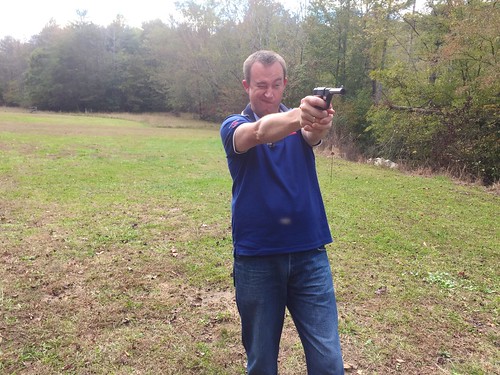 You'd think that if I was cool enough to pose with the unloaded gun without ear muffs, I'd make a less stupid face...but you'd be wrong.

As an alumnus of Hollywood Gun University, I knew that some semi-automatic handguns have the slide that can fire back and cut your hand if you are a total newbie and are holding it wrong, but that didn't stop me from holding it wrong, with my left hand a little higher than my right, and on my first shot, the slide very lightly nicked my left hand, not breaking the skin but enough to warn me to be less of any idiot. 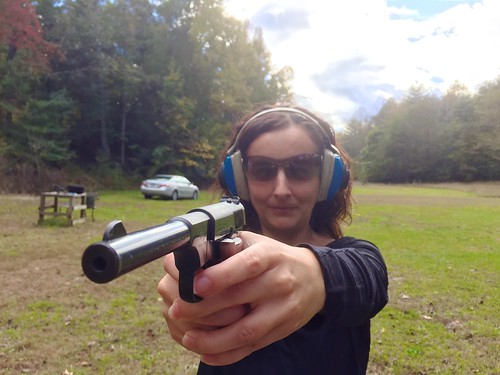 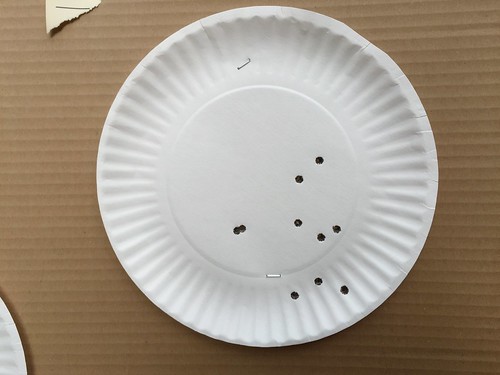 All of my shots hit the plate I was aiming for. I was very pleased with how well I did. It's really not that hard to line up the sights with the target; the hardest part is keeping your hands steady as you pull the trigger.

Although I would probably not have been able to name it if quizzed beforehand, the name ".38 special", and the gun itself, is very familiar to me from movies. 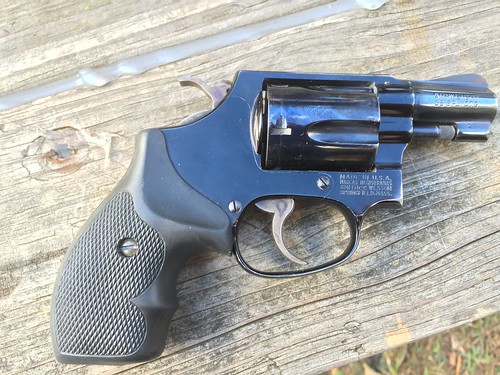 This snub-nosed model was downright cute. It, too, felt good in the hand, but not as good as the Colt. I was very impressed with this gun as a machine, a feat of design and engineering. 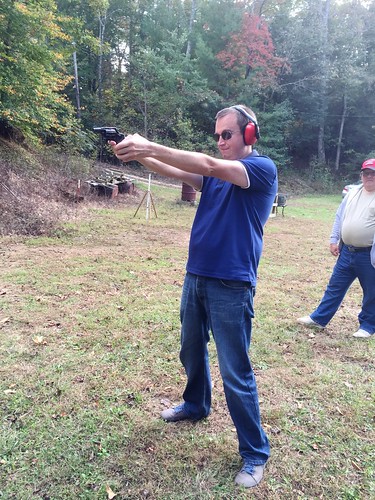 There was definitely more recoil from the .38 Special. I was standing beside Marga when she fired it once and I could feel the shockwave hit my chest.

That's Clyde back there, if you hadn't guessed. 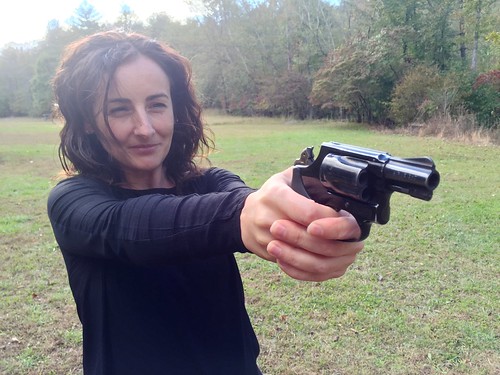 One of the other handguns I could name, common in police dramas. Jack Bauer reloads a glock several times per hour of 24. I was aware that it was known as the "plastic gun", but it was surprising just how much lighter it was. Due to totally forgivable absentmindedness, Clyde accidentally left the Glock ammo back at the house, so we weren't actually able to fire this one...but that didn't stop us from posing for photos! 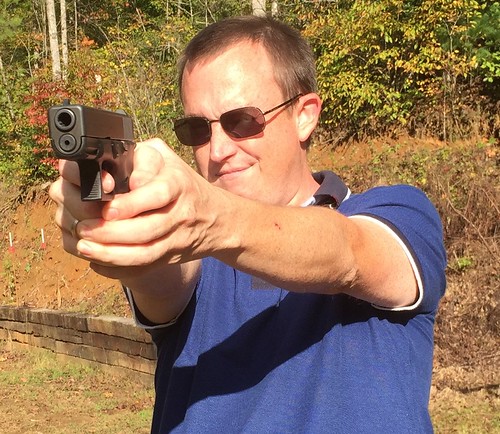 That's a better pistol face, especially with the badass shades. 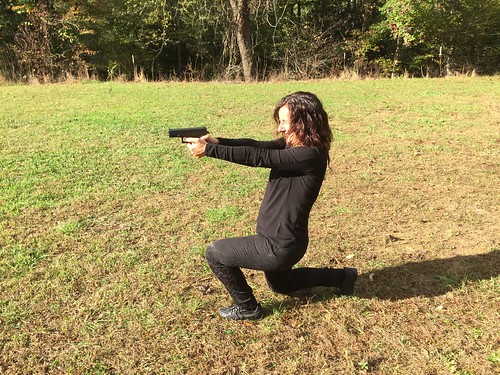 Marga, Charlie's on the phone for you.

Okay, it's time to take it up a notch!

I'm mostly familiar with this weapon from Ye Olde Gun Debate, which has, at the time of this writing, waned because it's been a while since a bunch of schoolchildren were gunned down.

Although the first adjective in the wikipedia article about the AR-15 is "lightweight", I was amazed by how heavy this gun was. All of them, really, were heavier than I had imagined, but I would need to visit the gym a bit more often to shoot an assault rifle more than a few times. No wonder soldiers spend so much time on "PT". While a more accurate weapon, its heft made made it harder to aim because of having to hold a weight in your outstretched arm.

We were firing .22 caliber rounds. 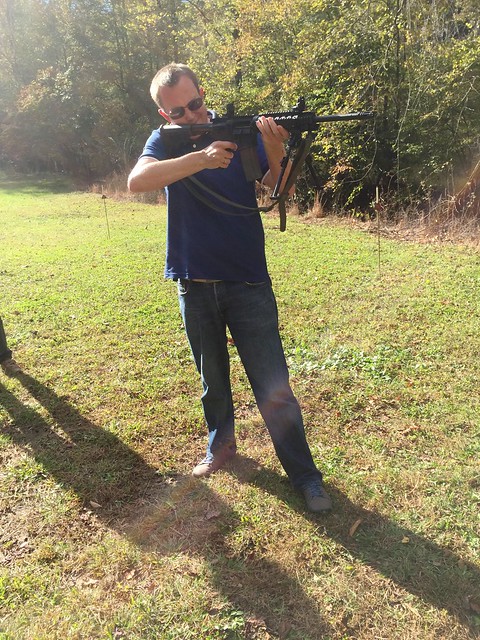 The other thing I noticed most with the rifle, due to its sight being so much closer to my eye, when you aim with sights, the target gets very blurry. That's just the nature of lenses and focal lengths. Obviously this is solved with a proper scope. Every time I fired, I only knew that I hit the target because the people around me said, "Good one!" 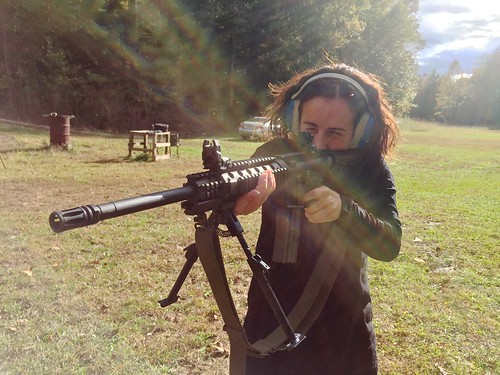 Less elegant than the handguns, I think.

Here's some slow motion footage I shot with my iPhone.

I must admit that shooting guns was a lot of fun. I can totally comprehend how someone could be interested in shooting guns just for the sake of shooting guns. Like golf, or darts, or any target-oriented activity, it's a matter of competition against your past self. I think it would be really fun to get good at shooting guns. Trying from further distances, or with moving targets would be cool.

There were several things that surprised me, or at least were unexpected about the experience, like the focal distance while aiming and the weight of the guns, but also just how sexy guns are. When I mentioned on social media that I'd fired a gun, a friend joshed, "So did you shit yourself or get a giant boner?" It was definitely the latter. Having and controlling this killing machine gave me a strong sense of virility. I didn't expect to feel so manly.

As much as I enjoyed it, my wife enjoyed it several orders of magnitude more. She was positively giddy on the drive home. I suspect this may become a regular activity on our visits to the US. I don't think we could've asked for a better selection for our firearm baptism, but there are other things I'd like to try, like a shotgun or a rifle from a good distance with a scope.

I remain very content to live and raise my family in a country where I can walk into a mall and be confident that the number of civilians carrying loaded weapons is zero, and I certainly don't want to own a gun or have one anywhere near my home. But I'm definitely placing firearms into the category of hobbies to do every once in a while using someone else's equipment, like boating.

A huge thank you to Clyde for being such an awesome instructor and gracious host. 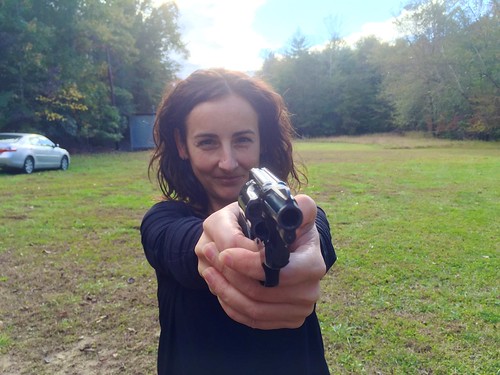