There are many moments during the week I spent camping with Outward Bound in November of 1992, when I was 14, that I will never forget but one of them is surely the swing to get down from the ropes course. I don't remember much about the ropes course specifically, but the ten feet of free fall from a platform sixty feet in the air before the rope pulled me into a pendulum arc, the nervousness that preceded it, and the rush of adrenaline that followed shortly after will never be forgotten. It was a defining moment for me, in that it defined me as a person who understands why people seek those thrills, but who prefers to minimize even simulated near death experiences. I never again wore a harness attached to a carabiner.

Until my 36th birthday. In recent years, the park, in what is now impressively called "The River District" of Morganton, has seen a lot of improvements. There's an 18-hole disc golf course, as well as a zip line adventure center called The Beanstalk Journey. It was a great activity to do during our family reunion with my cousin Scott and his wife and three kids. It was also a great activity to try out my birthday present.

It's really hard to buy presents for someone with disposable income. The best presents are those things that you really want, but for whatever reason can't bring yourself to buy. My threshold for purchasing objects I desire is pretty low, so I'm a particularly hard person to buy a gift for, but this year the stars aligned and I received a very accurate present. If you had asked me to name something I wanted before it was given to me, I wouldn't have come up with it, but as soon as I was handed the separately wrapped memory card, I knew what present I was receiving... 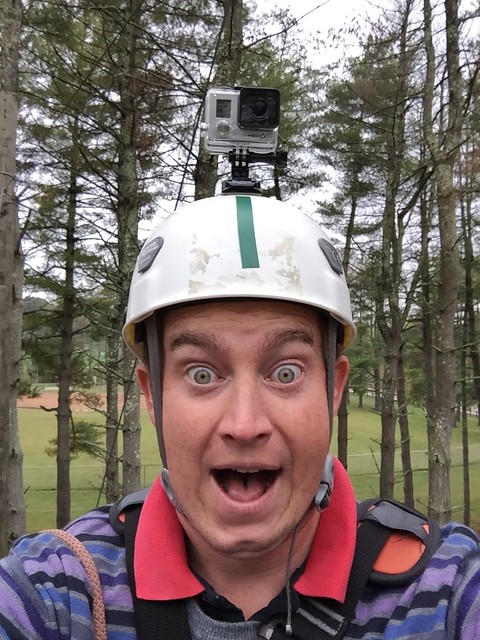 A GoPro Hero3 camera! You can rent them at The Beanstalk Journey, and they were nice enough to let me use their helmet mount with my own camera for no charge. 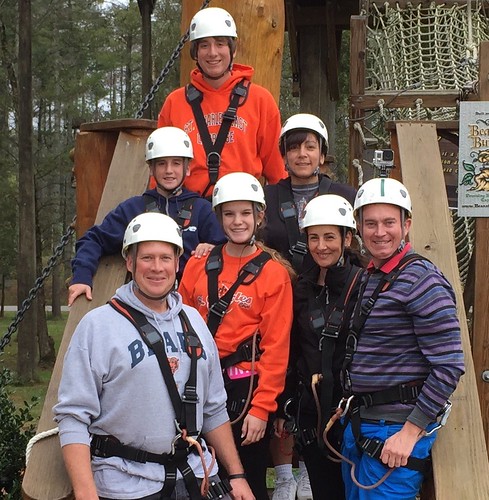 My wife and cousins and I ready to ascend into the trees. 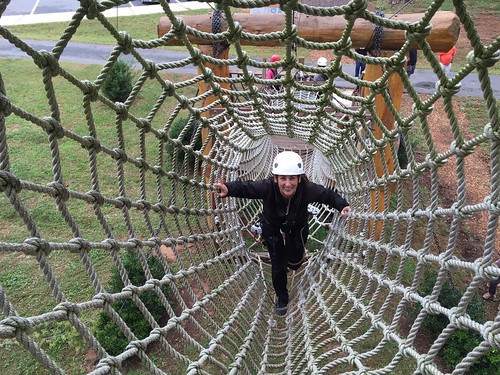 Walking up the first rope tube was pretty cool. Great for photos. 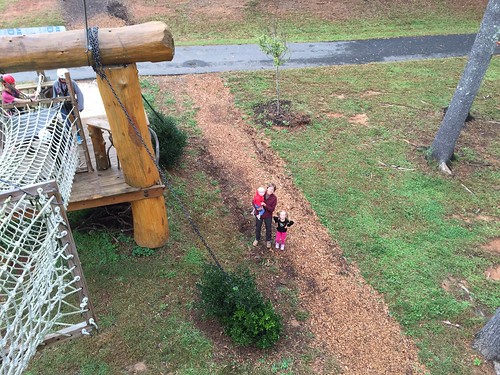 My mother stayed below to watch us with my kids. 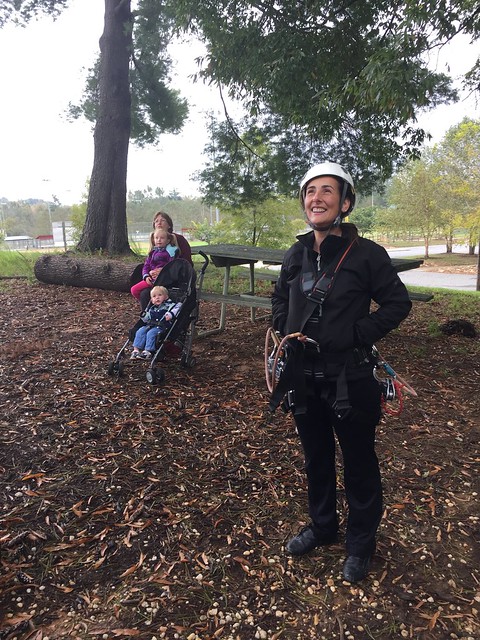 "Daddy, come back down!"

At first I thought I'd just let the GoPro record the whole 90 minute journey, but it soon became clear that there was a lot of standing around waiting in the "tree houses" while each other person from the group zipped over and was harnessed to the tree house, so I took our guides up on their offer to start and stop the GoPro to only record my zips. Even so, there was a lot of boring footage to edit out.

I was impressed by how relatively steady the footage was. I was expecting it to be a lot more jittery, like handheld footage would be, but I guess, while not quite as good as a chicken, we humans do a pretty good job of keeping our head steady. Another problem I ran into, literally, was having the camera bump into things. For most of the ropes course we had a steel cable above us right at the height of the camera, so on the bridge, the camera was rubbing up against the cable the whole way. Oh well.

So, without further ado, here's the movie I recorded with my helmet cam, mixed with some footage from my iPhone 6's 240fps slow motion camera. I do, of course, recommend cranking it up to 1080p in full screen mode. If you're impatient or getting dizzy, the zip lining starts at 4:20.

On the third or fourth zip (6:40), we were supposed to throw a beanbag into a hole down below. No one saw where mine went, so I'm going to ignore Occam's Razor and assume it went in the hole.

Zip lining wasn't nearly as terrifying thrilling as the swing I did at Outward Bound, but, especially on the first one, the "I'm really about to step off this platform?" nervousness was very similar. As before, I appreciated the experience, but, unlike the target demographic for GoPro's ads, I don't feel any lust for more simulated danger. I'll have to think of other creative uses for my new little camera.