This weekend my family and I took a one hour flight to the other side of the peninsula. It served as sort of a dry run for next weekend when we will fly ten times further. My 17-month-old son is still allowed to ride on a parent's lap, and doesn't yet require his own seat, which is great, especially for our transatlantic hop, where the prices are non-trivial.

For those of you that have never had the pleasure of flying with another human on top of you, the airline provides a little baby belt that has a loop in it to put the adult's seatbelt through so your offspring isn't offsprung during extreme turbulence. 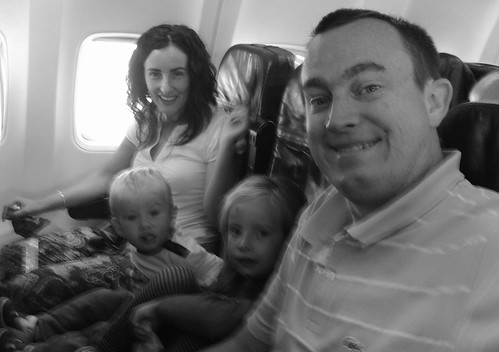 So there we are listening to the standard safety spiel and they get to the only part that mentions children, about how, in the supposedly rare, but terrifying, chance of a loss of cabin pressure, oxygen masks will descend down from heaven upon you, and, for the love of everything holy, do NOT put your child's mask on before your own. I'd like to think that many a hero dad has passed out while trying to get the strap around his daughter's ponytail, resulting in two deaths by asphyxiation rather than just the kid dying, which, as a parent...let me tell you...if your kid dies because you were putting on your own mask first, doesn't sound much better than the hero dad's ponytail-of-death fate.

You may have already guessed what station this train of thought is approaching...

Sitting there with my angelic spawn who, as far as you know, were totally not raising and lowering the tray table and kicking the seats in front of them, it occurred to me... THERE ARE ONLY THREE MASKS!! The whole Lord Of The Flies, every woman for herself, survival of the fittest, zero sum game sort of breaks down when you're competing against your very own gene sacks. In the event of a sudden loss of cabin pressure, we'd have to decide "Who among us doesn't get to breath?" It was about then that I began running nearby elderly passengers through hypothetical "I bet I could knock that person down in a chaotic situation and get his mask" thought experiments.

In case you missed it, this post was mostly tongue-in-cheek. Apparently there are usually four oxygen masks per three-seat row. Good luck traveling with twins, though!