This past weekend we went to the annual festival in Ampuero. The best way to describe it is that it's a mini-San-Fermín, the enormous annual festival in Pamplona known worldwide for its encierro (running of the bulls). San Fermín is seven days long, and the festival in Ampuero is only three days, but they do have a running of the bulls and they do party for all 72 hours for those three days. There is also a well respected dress code of wearing all white with a red scarf and optional other red accessories. The Ampuero festival is perhaps slightly more kid-friendly than the one in Pamplona. It's also not as overrun by foreign tourists, which might make it closer to the San Fermín that Hemingway fell in love with. It might make a good destination for some cheap holidays in Spain. We had a great time, going out until the wee hours on Friday and Saturday night, and then going to the bull run on Sunday. 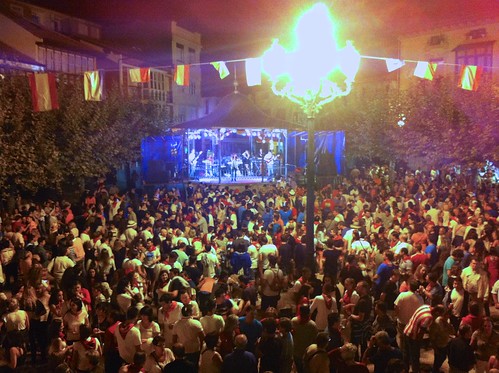 The main town square was packed during the night and empty during the day because no one could stand to be out in the hot sun. 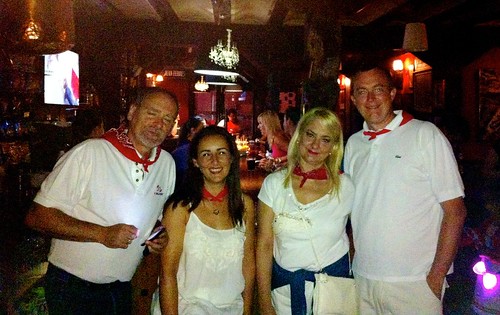 Out with some friends. 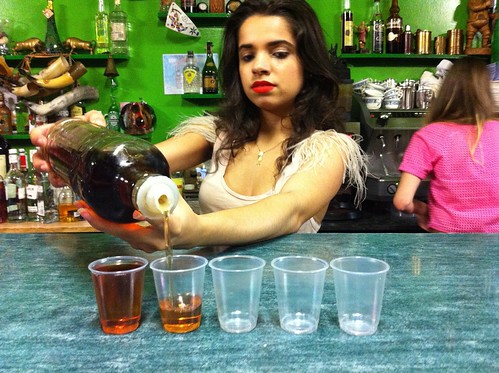 After dinner of some enormous sandwiches, our friends took us to a bar called La Florida and told us try the homemade liqueur that they make and serve only in that bar. They serve them in actual glasses during the rest of the year, but plastic during the festival. It was very good, a bit like Patxaran, but smoother. Worth taking the time to sip rather than take like a shot. 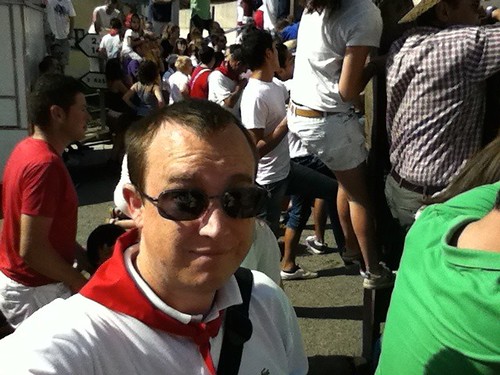 Waiting for the bull run to begin. I took this selfie for a response to a text message from a friend asking if we were going to Ampuero that day.

For those of you unfamiliar with the logistics of a bull run, they use a very clever system of fireworks to make sure that everyone in the area near the bull run knows the status of the bulls. At the scheduled time – 8:00am in Pamplona, 12:00pm in Ampuero – they fire off one firework and release the bulls. The second firework lets you know that the bulls have left the corral where they were released into and are now on the streets. The third tells you that they have entered the bull ring, and the fourth means that they have been ushered into the pen inside the bull ring and it's now safe to be in the bull ring. In Ampuero, I think they have one more because in Ampuero the bulls leave from the bull ring, run through the street to a dead end, turn around, and then run back. So I think there's a firework to tell you when they've reached the end and turned back around.

Here is a pretty good view of one of the bull runs this year. If you've seen video from Pamplona, you'll notice how many fewer runners there are – so it's a lot safer – and you can see how they turn around at the end. Not all of the running bovines are bulls, most of them are cows that are easier to control and give the bulls some companionship and someone to follow. Generally, but not always, you can tell the difference because the bulls are often black. But be careful, red (brown) bulls are known to be more ferocious.

See all the people standing up on the barriers, as well as people looking from underneath? The day I went to the bull run, I got there at the last minute so I had to shoot my photos from underneath the barrier, which was dangerous, because the people clinging to the gate to see over it could easily have stepped, jumped, or fallen down upon me. 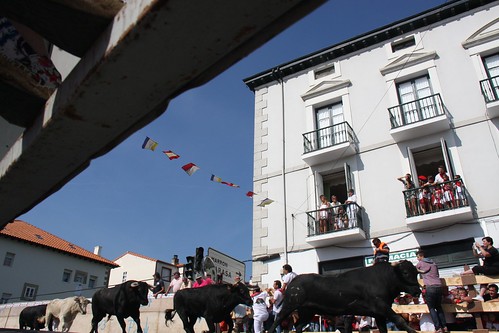 You can see what little ledge is supporting the people above me. 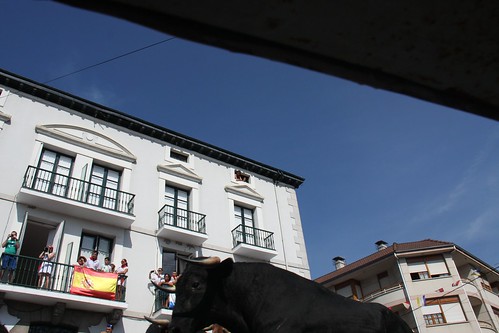 By complete chance – I had no idea she was there – I managed to capture my daughter's preschool teacher, Viky, right between the bull's horns. 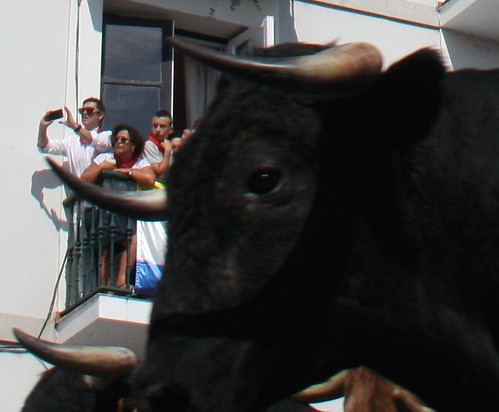 You've gotta have connections to get a vantage point like that! 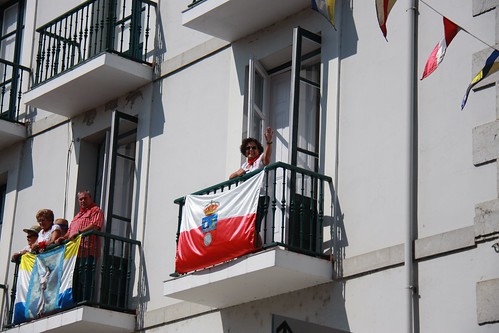 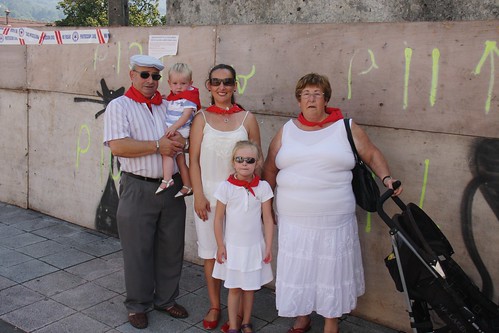 My children, wife and in-laws, dressed for the party. 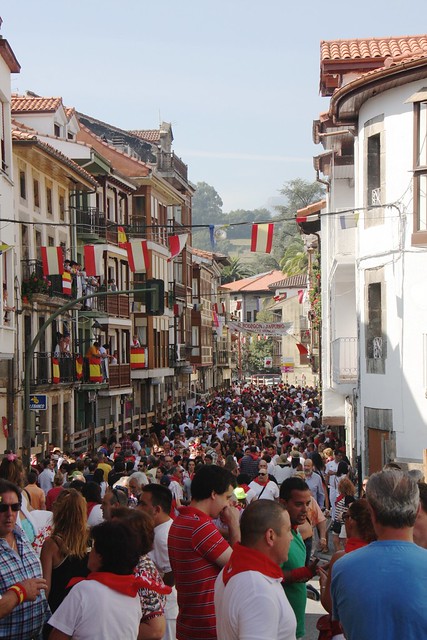 This is the street that the bulls were running down, just ten minutes earlier. 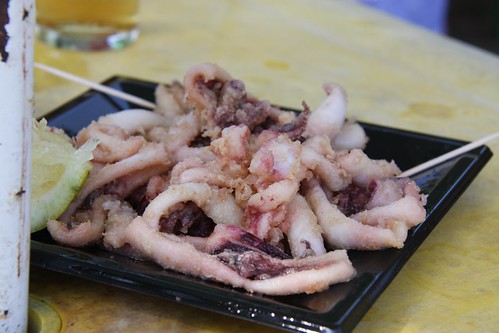 We stopped for some rabas, the local fried calamari specialty. 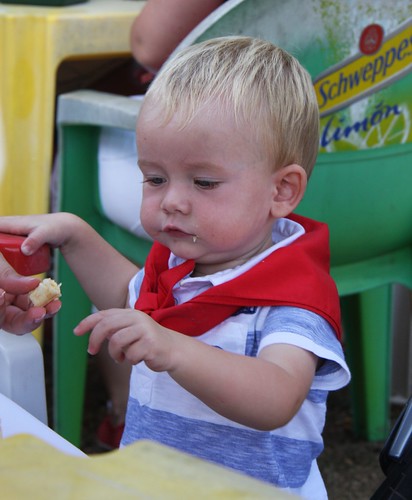 Even Ian liked them. 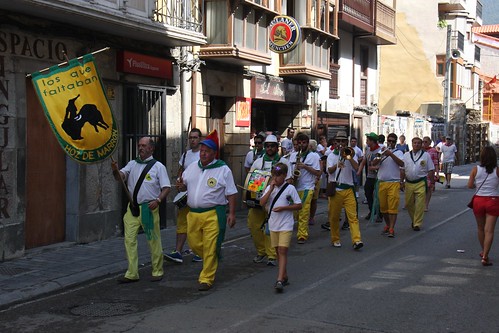 Spanish festivals like this usually have these little marching bands, called charangas, that walk around playing danceable music to liven up the party. Often they are from other towns and travel to parties most weekends. The band members are clearly having the most fun of anyone there.

Here's a video to give you an idea of the music.

As in all amateur social dancing situations, it's important to not take oneself too seriously. Beer helps. 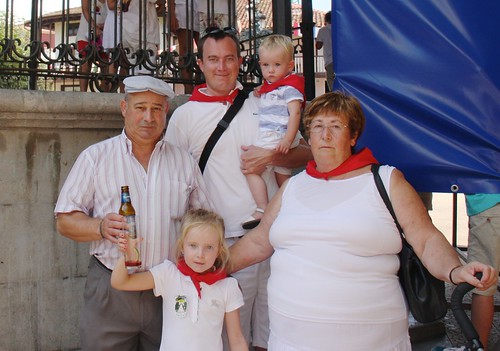 It was very important to find shade, and stay hydrated, on Sunday afternoon. 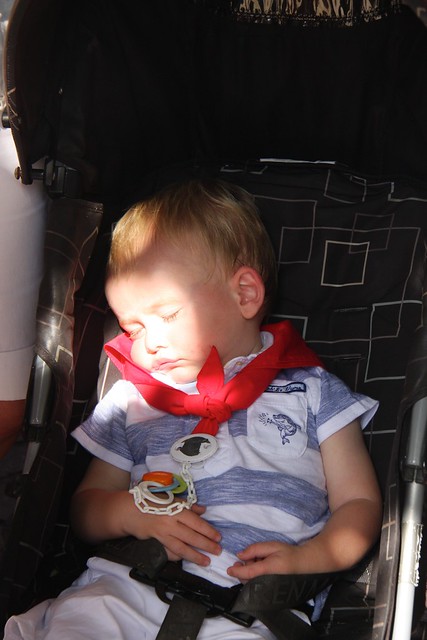 Too much excitement for some. 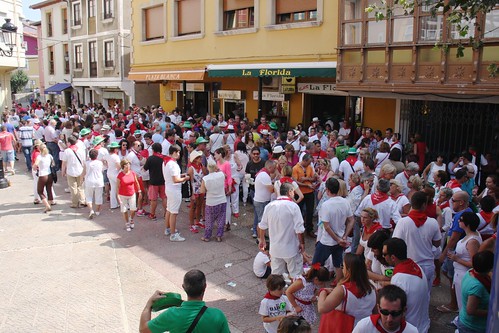 See how no one is in the sun? There's that La Florida bar I mentioned earlier. 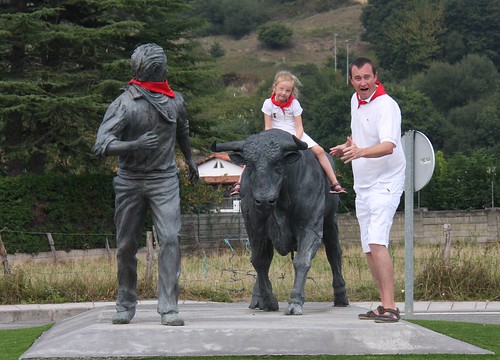 On the way back to the car, we stopped to enjoy this bull running statue that adorns one of the town's main roundabouts. It's about as close to actually running with the bulls as I'd like to get.

We had a fantastic time and are already looking forward to going back next year.