On Sunday morning, our last weekend day before our children return from summer vacation, my wife and I realized we had total freedom to do whatever we wished. As we were contemplating our options, my stomach rumbled, so I picked up an iPad and went to Mule Carajonero, far and away the best food blog in Cantabria, to check out potential restaurants we could experience. When I marveled aloud at how many "We've eaten at" posts there – roughly 750, 610 of them in Cantabria – my wife came over to look. One of them immediately popped out because she'd read an article recently – probably this one – and had stored the name "Condado de la Mota" on a mental restaurant todo list. We liked what we saw, so I called them up to make a reservation. It was only a thirty minute drive away, so we arrived a little early. 1:45pm is pretty early to sit down for lunch in Spain, but it meant that our service was lightning fast. When we sat down, we were so hungry that it took some willpower to not take a bite out of the ornamental Granny Smith apple on the table. 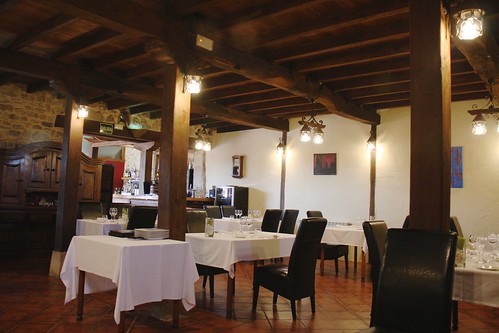 I've found, in Spain at least, that you can tell a lot about how good, or at least how posh, a restaurant is from the distance between the tables. When the food is expensive, they can afford to seat fewer patrons. 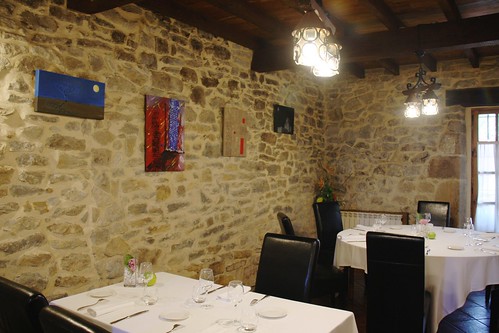 The art was not at all to my taste, but I loved everything else about the dining room. I imagine that it kept many a ninetieth century ungulate warm during the wet Cantabrian winters.

I fully agree with my "gastronaut" friend, Simon, about what to order at nice restaurants. If you're going to pay more than your average meal cost for a better than average chef to cook for you, you're better off going with the tasting menu, which provides several smaller portions of things, than with a single larger portion. You get to experience more areas of the chef's expertise, and generally will receive food that is a lot harder to cook properly.

So that's what we did. 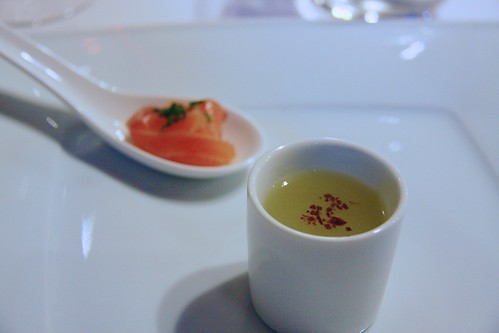 Smoked salmon with some spices, and a melon broth with cecina (cured beef) powder. Everyone got one of these starters whether or not they ordered the tasting menu. Both mouthfuls were delicious. 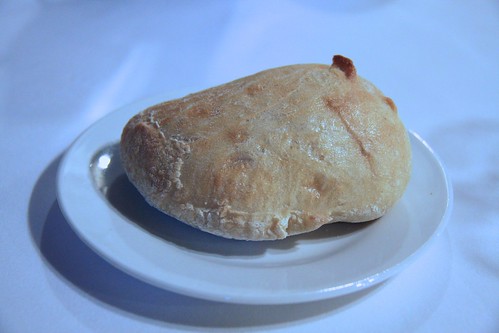 Our piping hot bread was good, but nothing special. 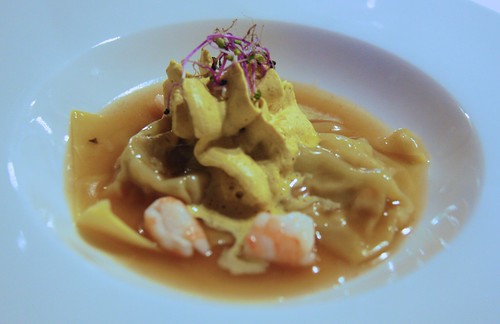 Ravioli de pollo con langostino y espuma de curry. Chicken ravioli with shrimp and curry foam. The curry foam was lovely, and the ravioli was a little hard to eat due to only having a spoon and a fork, but we managed to cut them awkwardly with the spoon.

Now on to the two main courses...

Lomo de bacalao con tomatitos asados y espinaca. Cod with roasted cherry tomatoes and spinach. The spinach was done in that way that makes it crispy, which like. The cherry tomatoes' stems were just sitting on top of them, replaced after the roasting, a nice touch. They were sitting on what the waitress called "olive dirt", some sort of dried olive particles which was delicious, but awkward to consume. My only "Oh my god, that's good!" moment of the meal was when the first tomato burst in my mouth.

I've long suspected that most people, and most restaurants, overcook both their meat and fish. When you go to a place where the chef knows what he or she is doing, both the meat and fish appear undercooked, but I think that's just because we are judging it based on our misconception. I'm not a huge cod fan, but this cod was wonderful.

At this point my wife said, "Okay, the meal is over, now we just have the two desserts!" This concerned me a little, because I was still hungry. We hadn't really eaten that much, I felt.

I needn't have worried. 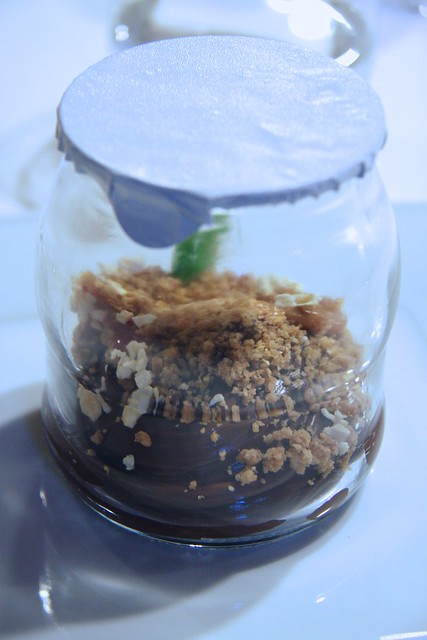 Cremoso chocolate con tierra de avellanas y maiz. Creamy chocolate with hazelnut and corn dirt. My wife and I, who both prefer savory dishes to sweet ones, agreed that the desserts were the best part of the meal. This mousse terrarium, in particular, was amazing, right down to the sprig of spearmint. 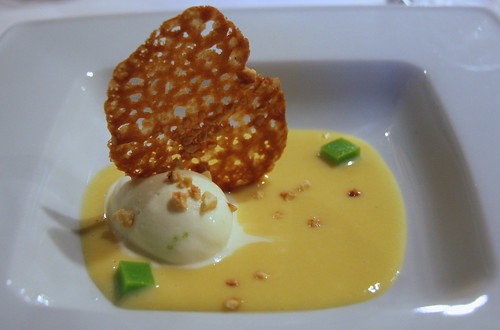 Rather than return to our car, we decided to go for a little walk in the rural countryside the restaurant is situated in. After walking three hundred meters, we had seen dogs, cats, sheep, goats, cows, horses, geese and a donkey. The bucolic Cantabrian landscape was delightful in the late summer sun. 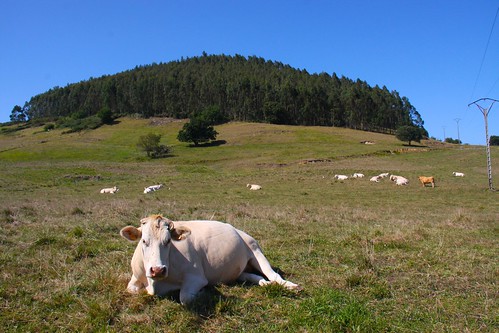 Only a single cow was standing.

Eventually we wandered lazily back to the car. On our way back to the motorway, we saw a sign for a golf course, so, on whim, I took that exit from the roundabout to go check it out. We drove over a ridge and were greeted by a stunning tidal beach. I barely managed to keep my eyes on the road to get us to the golf course parking lot, and we got out to walk around.

You've got to scroll this sucker to really appreciate it. 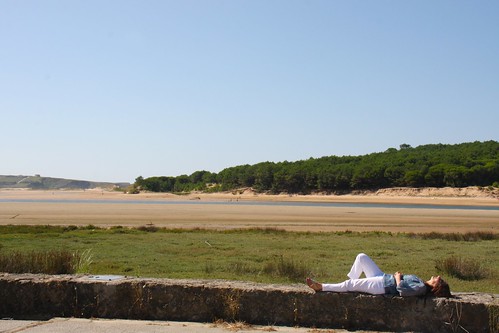 We really wished we'd brought some beach clothes rather than our fine dining outfits, but some bathing did occur. 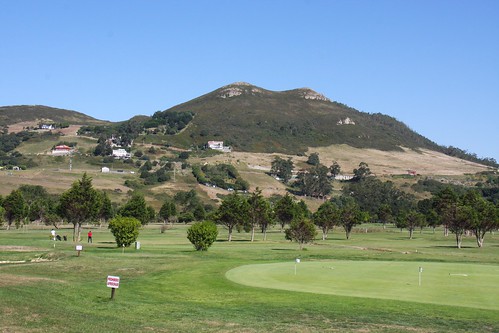 The golf course was in a picturesque spot, but the quality looked, let's just say, "affordable".

After that, we left Mogro and stopped by Santander, on our way back east, to spend the afternoon walking along the water and in the city to work off those desserts. It was a wonderful day.