State of the Offspring Address - August 2014

The offspring have spent the entirety of August on vacation with their Spanish grandparents in Extremadura, an inland region in the south of Spain. For the first half of the month, my wife and I spent a fortnight with them. It was fun to see them in this different environment. At fifteen months old, Ian is progressing very rapidly. He's very steady on his feet and is getting a lot faster. He's even sprouting a vocabulary that is almost in the double digits. When Nora was Ian's age we were worried – hilariously, in retrospect – about her language development. He's also learned to kiss, which he does by planting a big open mouth on your cheek like he's about to bite you.

Because of the ancient nature and rural design of the towns and houses, there are many places where the ground is uneven, and one must step up and over a little curb or barrier, even inside the house on the way to the bathroom. We were all pretty worried about these, easily imagining Ian carelessly tripping over them and banging his head on the sharp corners. Much to everyone's delight, however, Ian is like a mountain goat: he sure looks precarious when he's traversing them, but he is extremely surefooted and careful with his center of gravity. When he can hold on to a wall or door to pass a step, he will, and when he can't, he will gesture to ask for a hand to hold. We're very proud of him. 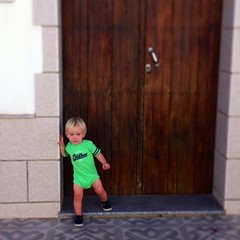 At as young as three to six months of age, it was clear that Ian was very callejero, as they say in Spain. He loves being outside in the street. There would be times when nothing would calm him down as a baby as much as being pushed for a walk outside in the stroller. Nora, on the other hand, is very casera, likes being at home. I joked once that they might grow up in the same house but barely know each other. This trend continues.

Pretty soon after he's had his breakfast every morning, Ian points to the door and says, "'alle, 'alle.", his approximation for "Calle, calle," meaning that he wants to go out to the street. There are times during the summer in southern Spain in which nobody is in the street due to the extreme heat, but Ian wants to be. When there was no shade at midday, we wouldn't let him, but in the mornings or evenings when one side of the street had shade, a grownup would go out with him to keep him in the shade and protect him from cars. 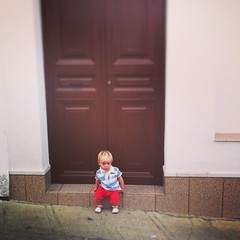 Ian is really good with the cars. When he hears one coming, he gets up on the curb and watches it pass, often cheering in delight – he's such a male! – and approval of the car's existence.

His pastime in the street, at least in Extremadura, is playing with rocks, little tiny pea-sized pebbles that line the street our house is on by the hundreds. He picks them up, sometimes tastes them, and then throws them. He's capable of throwing a little rock overhanded at least 6 meters (20 feet), and then walking over to where he threw it, inevitably into a group of other rocks, and pick out the same exact rock he threw! The lad's got a future as a golf caddy, if you ask me. 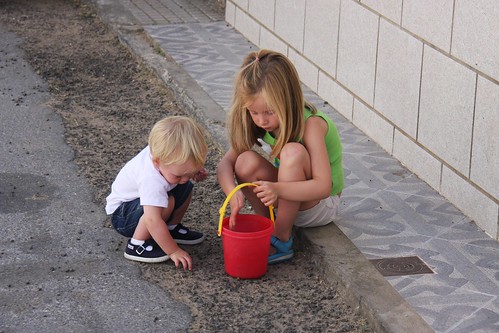 When a neighbor gave them a bucket to collect the rocks in, the fun really began! 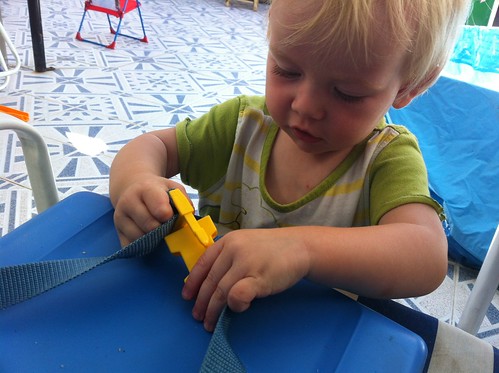 This little strap fastener on Ian's booster seat was his most favorite pastime. I constantly went back to it when I needed to do something, like prepare his lunch, but he wanted to be in my arms. I could set him in front of this thing, and he would do his best to fasten it, sometimes putting them together incorrectly and having to pull them apart again. He got so much satisfaction from the click when he finally got it. It's a great hand-eye coordination exercise, and it made his old man imagine some sort of career in engineering for him.

I kept stressing the word "open" when I would unhook it for him, hoping he would say "Open!" when he gestured for me to unlatch it for him, but he never did while I was there. Later, over the phone, Nora reported that he knows only one English word: "open". When I asked who taught him that word, knowing full well that she saw me working with him to say that word, she told me that he just figured it out on his own; no one taught him. Sigh...

Ian not only walked before his sister did, but he's begun speaking earlier, too. As of this writing, his known vocabulary is:

Nora has a great time in Extremadura, taking full advantage of the total lack of schedule or structure, sometimes going to bed at 3 AM, sometimes getting up at noon, etc. That's the fun part, even for adults, of such a rural town vacation; it's nice to not have to be anywhere or do anything if you don't want to. However, I did notice that she's getting to the age where she wants to do things and play games only appropriate to people her own age.

One lazy afternoon she was playing Uno™ with her grandfather, and after they had played a few hands, it was clear that they were both getting a little bored. Nora declared that she had invented a new game, in which rather than just one discard pile that needed to be matched with color or number, there would now be ten! We all did this is as kids. This is the kind of idea to which another five year old would say, "Oh, cool!" but that it only takes an adult a second or two to realize that it completely destroys what scant value the original game had.

She then went on to declare that they were going to play a game where the object of the game is to decide what game to play next. Again, the kind of thing another five year old might be into, but enough to make even the most caring, doting, I'll-play-anything-you-want grandparent facepalm.

While we were there, the town we were in was celebrating its annual summer festival, with live music and "rides": bouncy castles, a set of trampolines, and this big padded thing for kids to climb around in. Nora has always been very wary of these activities, never really wanting to go in, especially if there are a lot of other children, but this year she did. The first time, she couldn't bring herself to go up to the top area and use the slide, and she never got up the courage to go through the big spinning rat wheel thing, but she did enjoy herself. If she'd had a friend to describe every action to, she'd've had an even better time.

This year was relatively very mild, but playing with water is a big part of the summer fun in Extremadura...often very scantily clad fun. This video is funny because it's so Spanish; how many American children pretend to serve each other wine?

From what I, as an only child, can tell from what others say about siblings, Ian and Nora generally don't have many conflicts. It's not that rare to see them playing together like this, although this was a particularly perfect moment where Nora designed a game around what Ian already wanted to do, and Ian understood the pattern and participated perfectly. She must have refilled that bottle a dozen times and let Ian empty them one cup at a time into the drain. Nora is very verbal and loves to narrate everything she's doing when she's playing.

"Get out of the bucket, sister!" 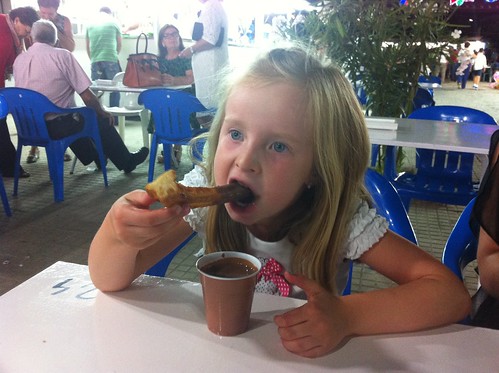 Nora got to experience the Spanish rite of passage known as eating chocolate con churros at 3am. They are so good! 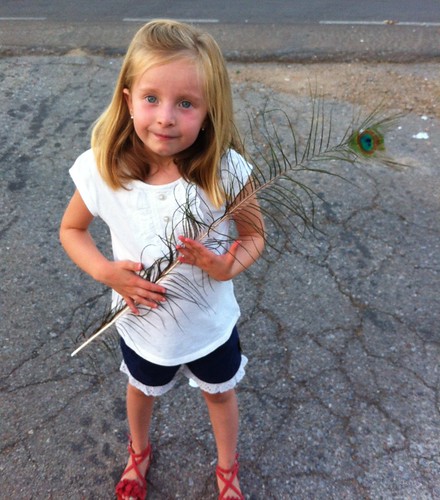 She also found a peacock feather while on a walk in her grandfather's home town of Zahínos. 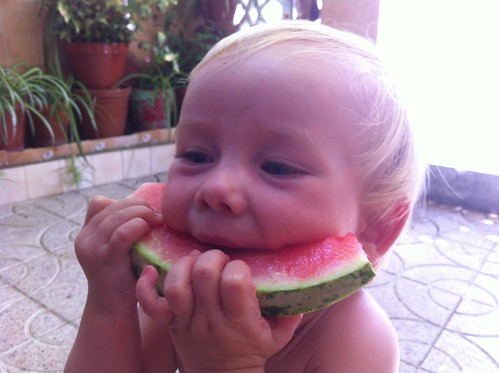 Ian discovered that he loves watermelon. 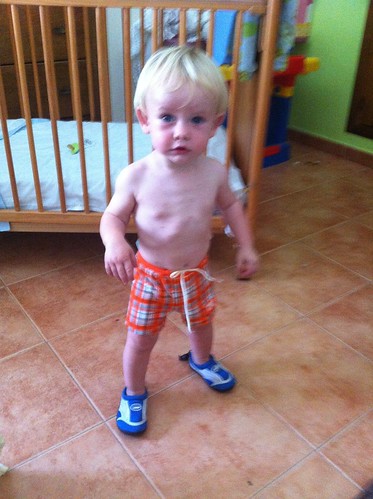 He also discovered that he looks fabulous in his swimming suit. 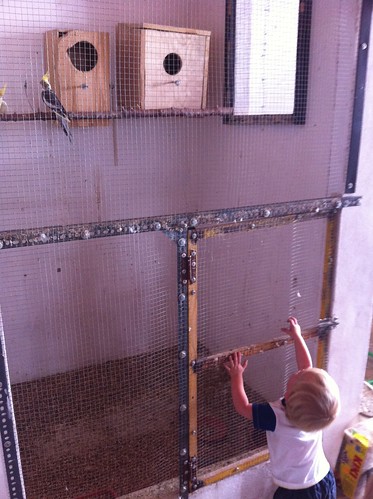 In Zahínos, the empty garage across the street from our relatives' house has some exotic birds. Once we showed them to Ian once, he kept going over to the door and begging and crying for us to let him in again to see the birds. 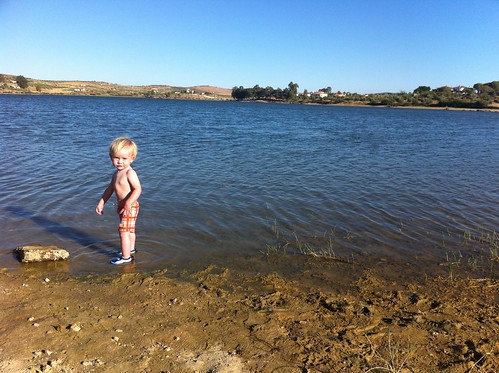 He very much enjoyed throwing little pebbles into this big reservoir we swam in. 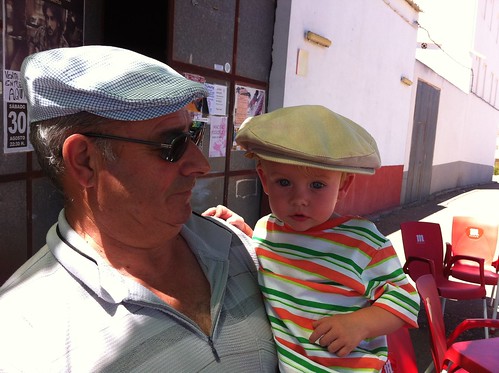 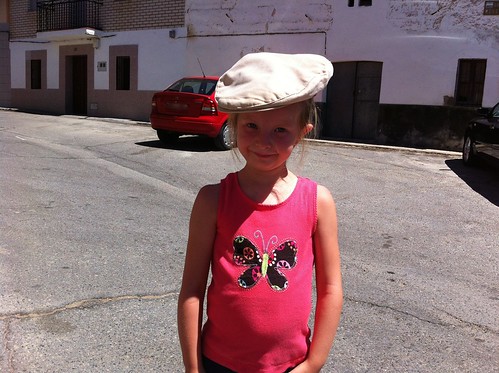 Both Nora and Ian love gazpacho, the cold soup from the south of Spain. One evening they had a particularly adorable moment where Nora was feeding Ian, which I managed to capture for posterity. Nora didn't get my "Blow on it so it doesn't burn him!" joke. Now that one can feed the other, I guess I can relax now as a parent, huh? 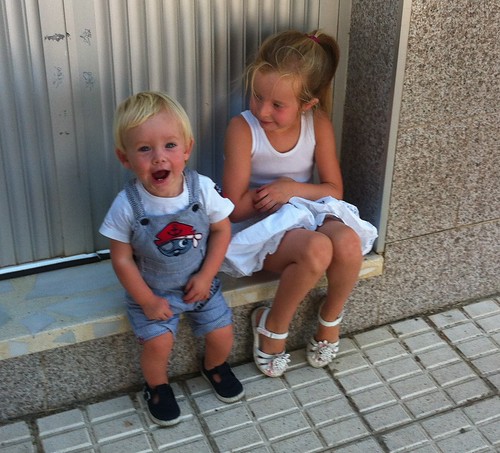