State of the Offspring Address - July 2014

This has been the month with the least contact with my children since I began this State of the Offspring Address series. Since I injured myself one week into the month, they have been away at their Spanish grandparents' house ever since, one week in the Basque Country, followed a two day visit with us, and then the rest of the month in Extremadura. Judging from my calls with Nora, she and Ian are having a ball. Ian is, of course, happy with his first and third favorite humans, his sister and his Spanish grandfather (I'm fourth), who is still riding high in the standings from his willingness to bend over and walk with Ian wherever he wanted before he gained his ambulatory independence. As a result, I don't have much to report. 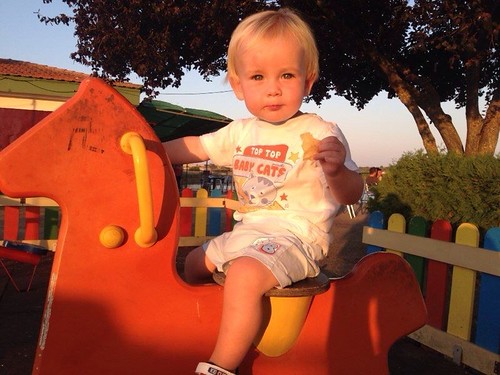 Whenever we call Nora, both my wife and I like to listen in on the line, so we get to hear her tales in both languages. After she speaks to her mother, she asks to speak to me, and I hear all over again what she just said in Spanish, often asking to be reminded what some common words are in English. "How do we say pájaro in English?"

One day, on our phone call with Nora, she was very excited. "Guess what I have!" With a five year old, that question is not merely begging a "What?", but is actually a demand for guesses. Eventually it was determined that she had a pet bird. Apparently a baby bird had fallen from its nest and she and her grandfather had collected it. The original owner of the house was a bird owner, so they had some bird cages lying around. They were feeding it. Nora was very excited. She said that, pending a decision on a new name, its name at the moment was "Tiko", the name of her Spanish family's only pet, an 18-year-old dog who died a few years ago. During the five minute phone call in which she was excitedly telling us about her bird, Tiko, the news arrived of Tiko's passing. "Abuelo says it died," she reported. She seemed mildly sad about it, but not to the point of tears. C'est la vie...et la mort..

Before Nora went down to Extremadura, her mother called ahead to check on the status of the swimming lessons at the local pool. It was confirmed that there was a lesson every morning. We put a good dose of enthusiasm into it, and Nora accepted that she was going to learn to swim at her swimming lessons!

She went the first day and reported back that she had participated in the warmup guided by the teacher, which included running twice around the pool, which was "very tiring!" But then the water wasn't her perfect temperature and she refused to enter the pool, or even acclimate her skin to the temperature with the shower. She's always been extremely picky about the temperature of her bath and shower, so we weren't too surprised. Plus, the instructor apparently ignores the younger kids in favor of the older kids, so the younger kids are left with their parent or guardian to learn.

We talked her into going back twice, but to no avail. To end on a positive note, she has gone to the local reservoir, where the quantity of water holds the warmth better throughout the night, and she did say that she was floating with only one point of support from her grandfather. So there is still some hope.

She's never been athletic, and probably never will be, but it'd be nice if she could learn a life-saving skill like keeping her head above water. As I recall, age seven was a big year for me, with learning to ride a bike, blow bubblegum bubbles, and swim, so there's still time...

For a couple of days in July, Nora spent a few hours with her teacher (she's had the same teacher for two years of preschool and will have her again next year) helping to clean up the classroom, i.e. take down all the stuff off the walls, for the summer. I didn't intend it, but we were walking by the school one day and we ran into the teacher, who invited Nora to come in and help. It turned out to be very helpful because I had several dental appointments for a root canal during that time. One day, the teacher let Nora bring home this toy bee which sings the Spanish versions of English children's songs which you will probably recognize. Ian is a huge fan of music, so he was definitely getting jiggy with it.

These are photos I've been sent since they went down to Extremadura on vacation. I'm looking forward to spending a fortnight with them soon. 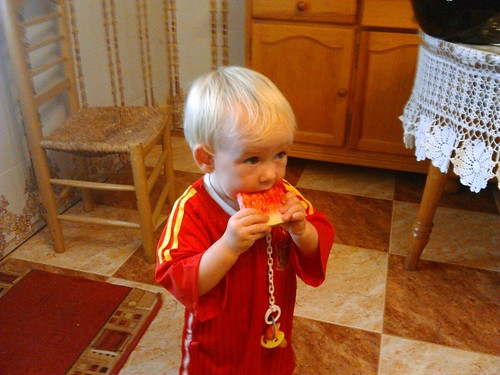 On his very first day down there, Ian learned about watermelon. He seems to enjoy it! 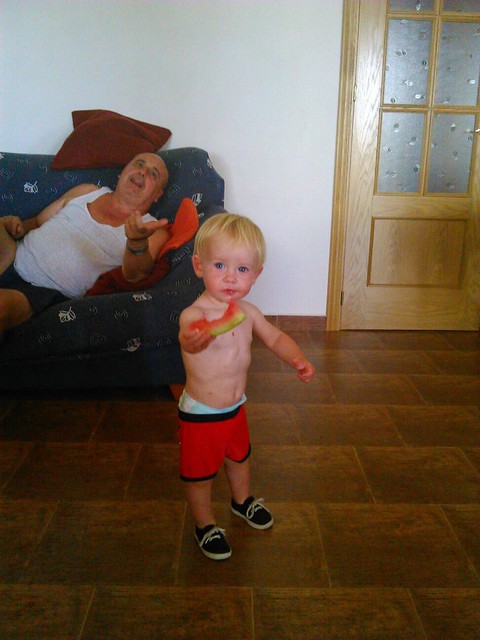 "This one's done. Can I have another?" 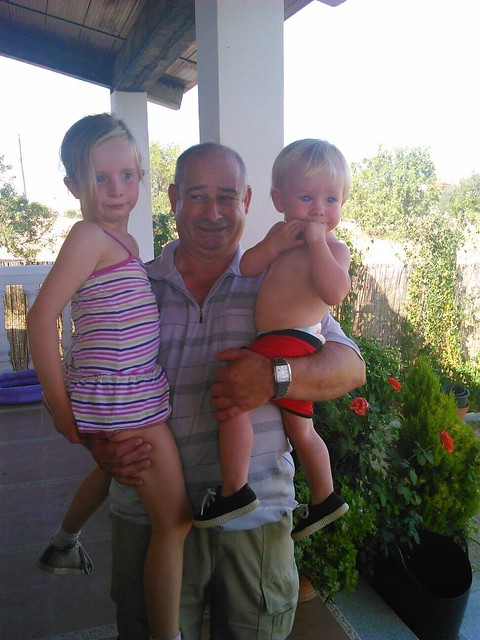 Having fun with their grandfather.

The state of the offspring is strong.